Wisteria is a beautiful, fragrant plant that looks especially attractive in abundance. But how fast does it grow? We did the research and found out. If you have wisteria from either a seed or a cutting, you'll find the answer in this post.

Wisteria is a fast-growing plant. It usually blooms within three to five years of planting, although some take 15 years. Wisteria can grow up to 10 feet or more in a year.

That's not all there is to know about wisterias. They can be tricky to grow, so we also included tips on how to take care of them so they can grow well in your garden, on a wall, on a pergola, or anywhere! Read on to learn more. 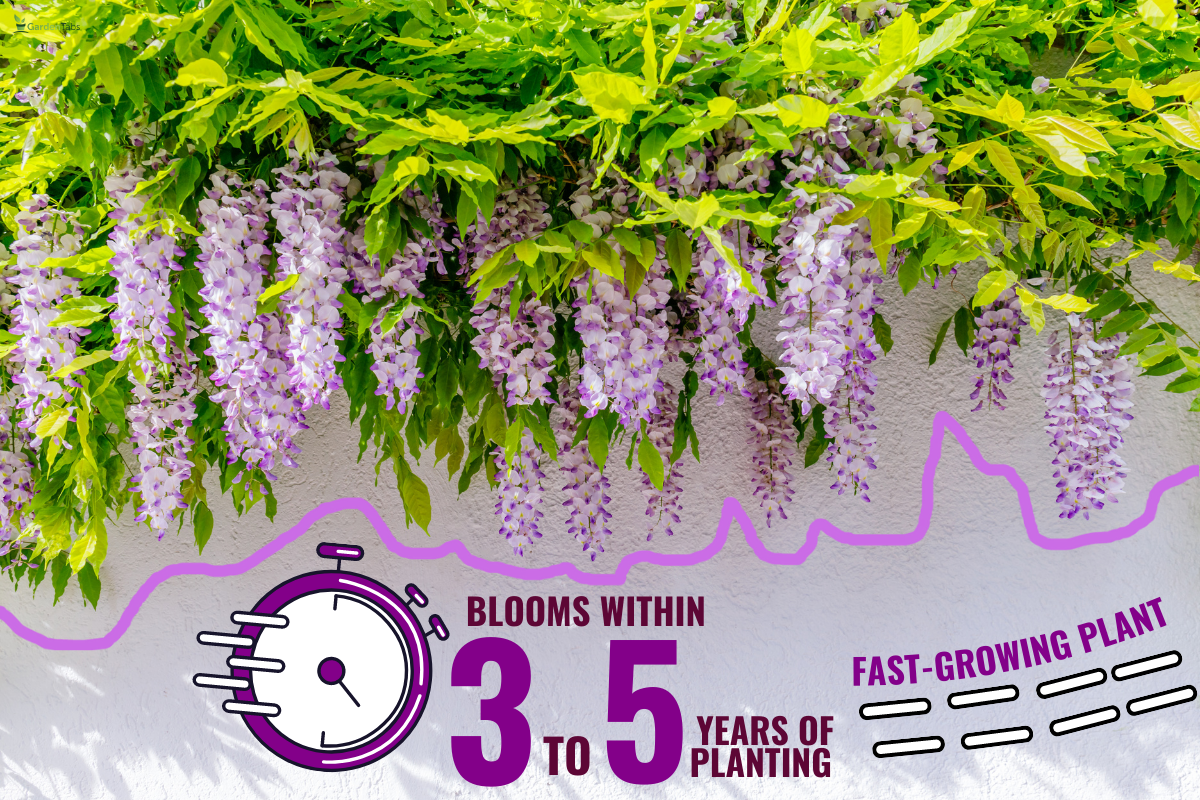 How Fast Does Wisteria Grow? 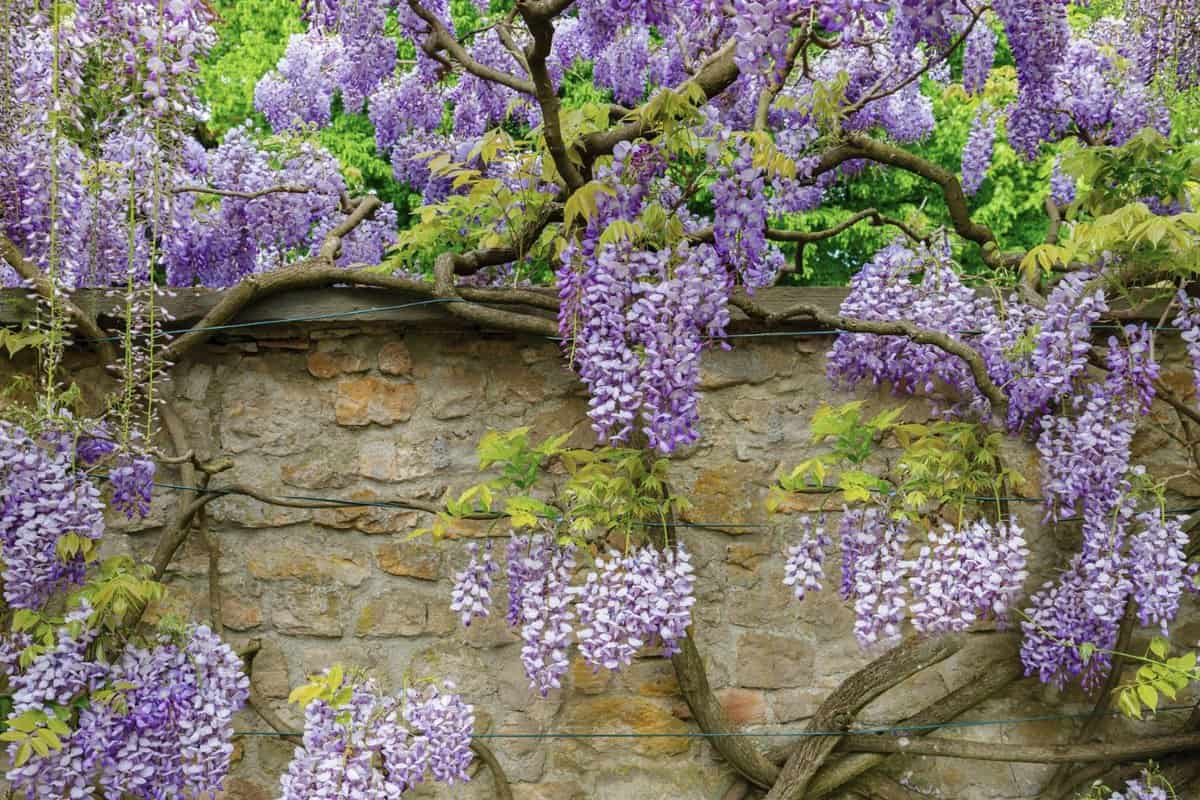 It takes many years for wisteria to grow long and beautiful. Wisteria doesn't just shoot straight up. It can grow with many vines that sprout in various directions. Many gardeners notice that their wisteria plants grow 10 to 25 feet each year.

This fast-paced growth happens just before the plant matures and when it's had plenty of years to grow before blooming. But it still depends on the type of wisteria, its growing conditions, and how you care for the plant.

The fastest-growing variant is the Chinese wisteria.

How Fast Does Wisteria Grow From Seed?

Wisteria seeds take 15 to 20 years to grow, and some may never bloom. You don't have to take such a long journey to discover that your wisteria can never bloom, which is why it's better to propagate them from cuttings.

How To Grow Wisteria From Seeds 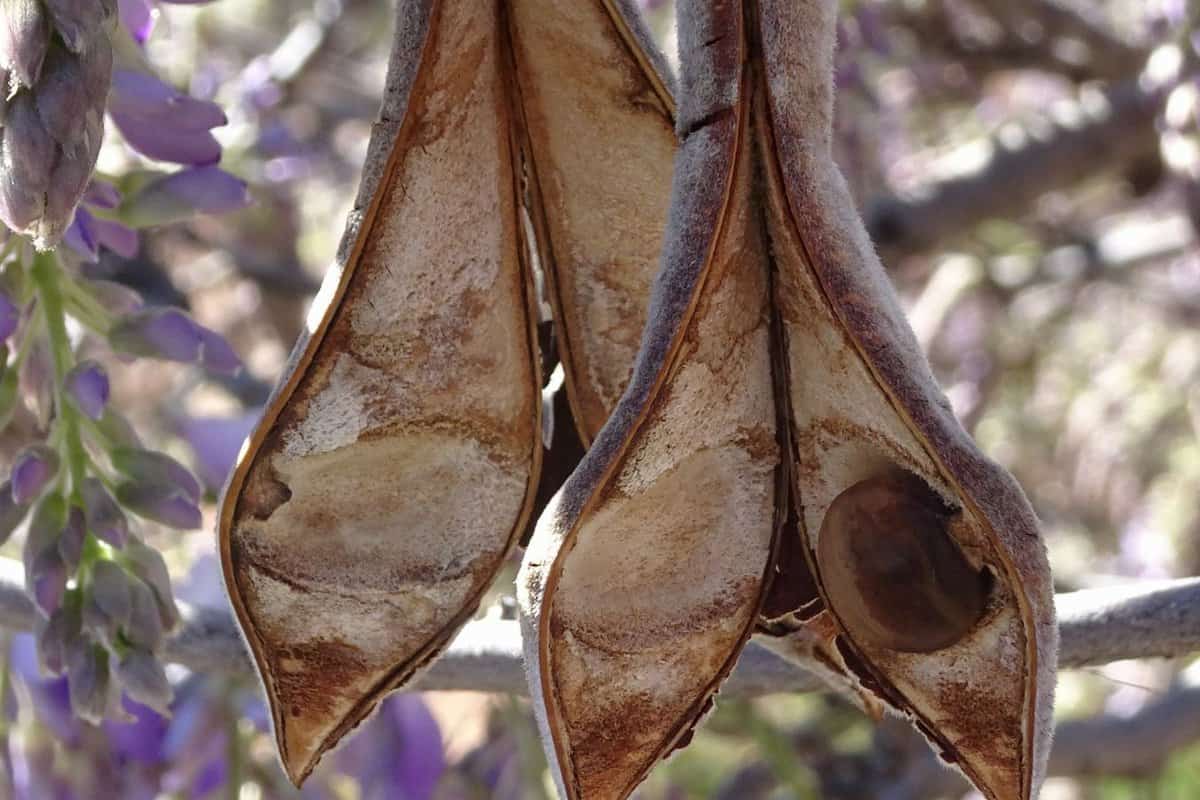 There are a few essential steps to successfully planting wisteria seeds. Follow these steps to be rewarded with beautiful purple flowers.

First, collect wisteria seed pods, which can be found hanging from the plant's vines. You can get them around October when they're mature and dried out. If you don't get them around that time, they will burst and fall to the ground.

Collect them with gloved hands, as they're toxic. To ensure that there are seeds in the pod, shake a seed pod that's still connected to the vine. If it rattles, you can remove it to collect the seeds.

Second, remove the seeds from the pod. You can plant them or store them to plant later, around spring.

The third step is germination. Break the seed shell so it can germinate. Then, hydrate the seeds by soaking them in warm water overnight.

Next, sow the seeds. Wisteria seedlings grow relatively quickly. You should separate the seeds into three-inch pots to sow. Fill the pot with a seed-starting potting mix and hydrate it before putting the seeds in.

Lastly, transplant the seeds. Keep them hydrated, and don't expose them to a lot of sunlight. After about a month, they will grow into four-inch-tall seedlings. Then you can plant them in the ground.

How Fast Does Wisteria Grow From Cuttings?

If you have a neighbor or a friend who has a wisteria, ask them for cuttings. You may also get a few cuttings from leftover pruning.

How To Grow Wisteria From Cuttings 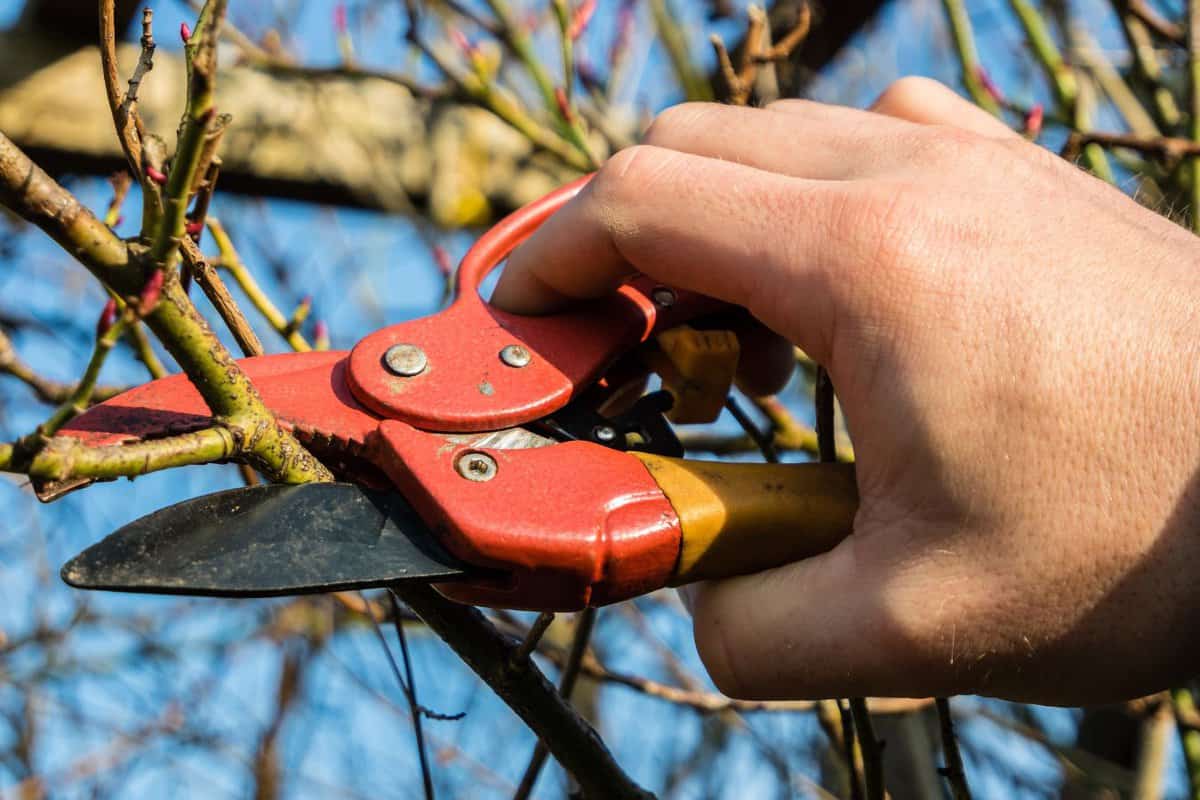 The best time to take cuttings from wisteria is around June or July because they're easier to root. To propagate wisteria from cuttings, here's what you should do:

1. With pruning shears, cut a section of the green vine at least 6 inches long. The vine should have two or more sets of leaves.

2. Clear the leaves at the bottom of the vine since this is where the roots will sprout. Trim the stem to expose the nodes at least an inch from the bottom.

3. Place the cutting in a pot filled with draining potting mix or rooting medium like vermiculite to promote its growth.

4. Keep the cutting in a bright area, not exposed to sunlight, and regularly hydrate it. It will grow roots within four to six weeks.

5. When it grows roots that are a few inches long, you can now plant it in the ground.

Check out these pruning shears on Amazon

How To Take Care Of A Growing Wisteria

This section is dedicated to guiding you in taking good care of a growing wisteria. Without adequately taking care of your wisteria, you might not be able to see them grow into beautiful vines. So, follow these tips!

After planting your wisteria, you might not notice any difference even after a year or two. Don't worry. This is a common occurrence. Your wisteria is most likely establishing its root system. This will take some time.

Assuming that the foliage is healthy, it may grow abundantly next summer.

Although uncommon, some wisteria may take up to five years to reach fast-paced growth.

If you're unsure, you should check for signs that your wisteria is dead. Read this post, "How To Know If Your Wisteria Is Dead," to learn more.

Allow your plant to get as much sun as possible, especially when it's young. If many other plants surround your wisteria, make sure to prune or relocate them somewhere else so your wisteria can get plenty of sunlight.

Other than that, it's impossible to work around this tip because your wisteria needs it to grow. If you can't give it plenty of sunlight, you might as well buy a new plant.

3. Get Rid Of Pests And Diseases

Pests and diseases can cause your wisteria to die. To avoid this, regularly clean your plant. Get rid of any wilted leaves, leaves or stems with spots, and any area with signs of infection.

Wisteria needs to be regularly hydrated to grow. Do not let your plant dry out or wilt. You can give it plenty of water but don't drown it.

Prune your wisteria vines as necessary. It will allow your plant to shoot branches here and there rather than grow long vines. Prune the suckers growing from the base of the plant too. They can halt your plant's growth.

7. Twining In The Right Direction

Many gardeners prefer to twine their wisterias in a specific direction. It's also an excellent way to keep things neat so that the vines will be manageable.

Twining is different among types of wisteria. Japanese wisteria, for example, twists in a clockwise direction. Chinese and American wisterias, on the other hand, twist counterclockwise.

Twining them in the wrong direction will be time-consuming as they'll need more time to adjust to growing correctly again.

Can I Air Layer Wisteria?

Yes, and you will need a mature wisteria plant to propagate. The first step is to wound a vine, any vine, by cutting and removing the first layer of the bark.

Then wrap it in plastic filled with damp, moist compost. As the plant heals, it will eventually create roots and a new plant.

This is an excellent alternative to taking cuttings and rooting them before transplanting. With air layering, you can remove the plant with roots and plant it in the ground immediately.

Where Can I Grow Wisteria? 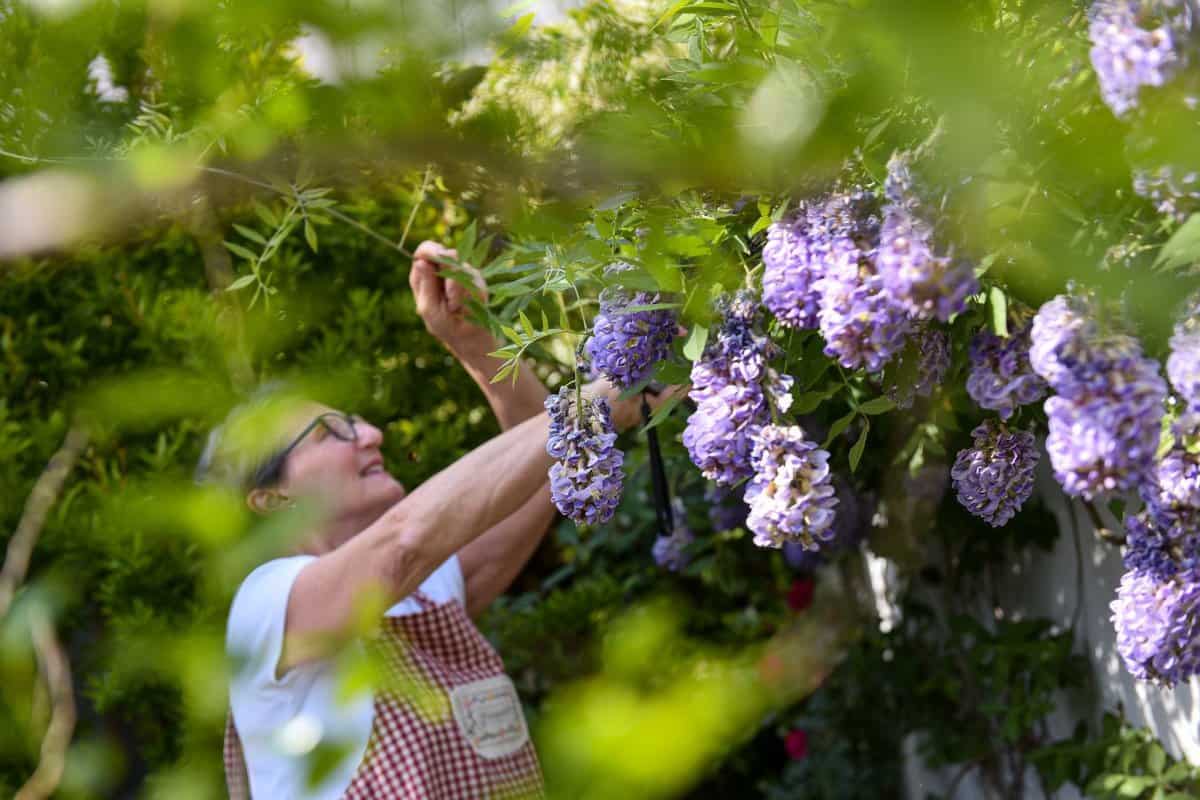 You can grow wisteria in USDA hardiness zones 4 to 9, but it depends on the type of wisteria you have. What's important is the kind of soil you plant it in.

Wisteria is a fast-growing plant. It's rewarding to grow when you treat it the right way. Unlike other plants, wisteria only takes a couple of years to shoot its vines.

Growing wisteria from cuttings instead of seeds has become more prevalent. From cuttings, they can sprout roots in four to six weeks and bloom in the coming years.

It is essential to identify the type of wisteria plant you have to know about the pace of its growth and other growing conditions.

Are you interested in learning more about wisteria? Then check out this post: Wisteria Tree Vs. Vine: Is There A Difference?