We may get commissions for purchases made through links in this post.

Looking to plant a gorgeous moss garden outside or indoors? Wondering how long it’s going to take those seeds to break through?

Moss has multiple uses. You can use it as a low maintenance alternative to grass, as a decorative touch to your garden, or as a decorative wall in your office lobby. However, although many people are excited about the prospect of using moss, they often wonder how long it will take to grow. This is a frequently asked question, so I have researched the topic and found the answer. 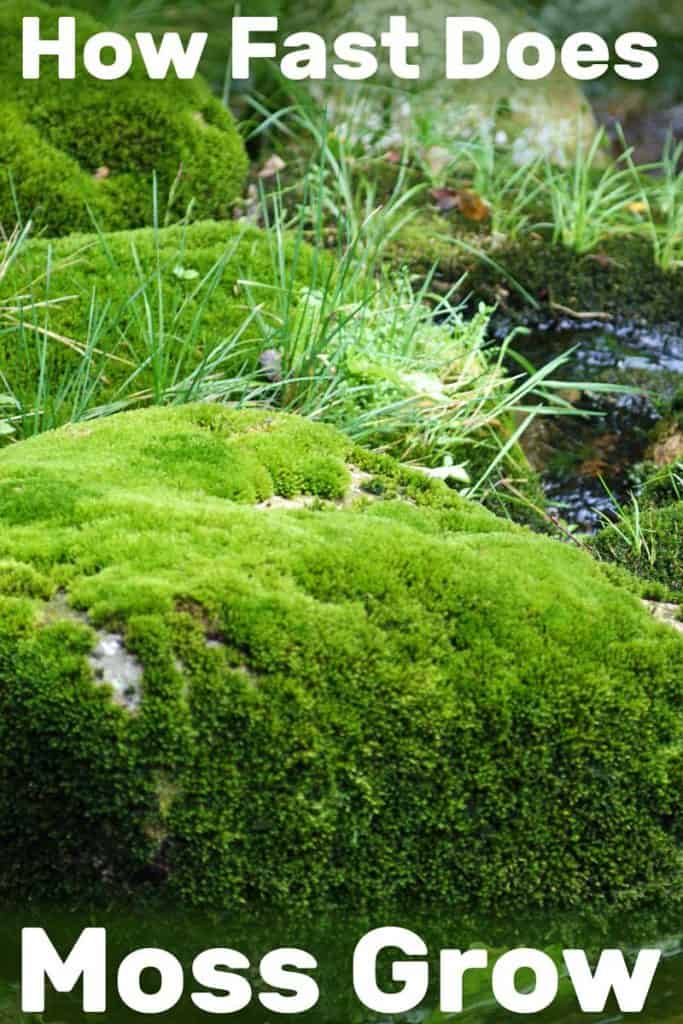 When moss is grown properly, you will see it begin to thrive and grow on its own within six weeks. Some moss varieties can take longer to fully flourish – even up to two years. However, you will see a healthy moss begin to prosper within this six week period.

The main caveat of having moss successfully grow within six weeks is proper planting and maintenance.

How to Grow Moss

In order for your moss to grow within six weeks, it has to be grown correctly. Moss needs a few prerequisites in which to thrive. Moss grows best in acidic soil in areas where there is no direct sunlight for long stretches of time.

The reason that moss can not grow in hot, direct sunlight is that instead of having roots, moss attaches to surfaces through filaments that supply nutrients. Because of this lack of roots, moss can fry out faster than other plants.

Moss is the true lone wolf of the plant world. Because moss has these small filaments, it is unable to compete with the roots of nearby plants or weeds. So the best place to plant moss is in a clean, weed-free area that is free of debris.

When Should You Plant Moss?

While moss can be grown and transplanted all year round, due to its pension for shade and moisture, the ideal periods to plant are during spring between March through mid-June and the autumn months of September through November. For the best results, avoid the hot summer months as they supply the least moisture.

Where Can You Plant Moss?

There are two primary places that are the best for growing moss: on soil and on solid masses like rocks and bricks.

How long would it take to Grow Moss On Soil?

Since moss does not require extensive maintenance, many people opt to plant moss in their yard instead of grass to conserve their water bill. Moss is also good for the environment and can add an extra design element to your house and lawn.

When growing moss on soil, the best method is to take existing moss from somewhere else (your garden, a neighboring property, a nursery, or online) and transplant it into your yard.

For the best results, you want to find a patch of existing moss that has been living and growing in an environment similar to the new place where you will be planting it. For proper transplanting of moss, you will need a rake, a knife or garden spade, and a few rocks.

When you have found the moss that you want to transplant, use your spade to loosen and free up the amount of moss you will want from the ground. Bring it to the destination. Before laying it down, use a rake to prepare the new soil and make a nice flat surface area. All you do next is dampen the ground and lay the new moss down upon it.

With the moss precisely where you want it, press down firmly and put the rocks on top, so the moss lays with a high level of solid contact with the soil below it. You want the filaments of the moss to be absorbed in the soil to a high degree so it can correctly attach and thrive.

During the next six weeks, keep the moss moist. When you cannot remove the moss with a light tug, you will know that it is secured and growing properly.

How long would it take to Grow Moss on Rocks and Bricks?

In the wild, moss grows on solid objects like rocks and trees because moss is partial to damp and sheltered areas. Rocks are also acidic in texture which is an attractant for many forms of moss.

Since this is usually a natural process, it will take a little more effort to grow your own moss on the rocks and bricks in your yard. To complete the job, you will need some luck along with some unique tools to stick the new moss to the rocks in hopes of having it thrive in its new environment. For this method, you will basically be making your own moss.

The trick is to take a bucket and add two cups of plain yogurt or buttermilk and one and a half cups of chopped up moss which can either be fresh (from your garden) or dried. Take a spoon and mix up the concoction until it is creamy and spreadable. If you find it is too thick, add some water. If too thin, then add more moss.

Let the mix settle for a day or two and then use a brush or your hands to spread the mixture on the rocks. Moisture will be needed until the moss has officially established itself. Add a light mist of water, just enough to not wash away the moss.

Do not be alarmed if it looks like mold is growing on the rocks. If you are successful, you will see the moss start to thrive in six weeks.

How long would Different Types of Moss take to grow?

There are several different types of moss, each of which needs particular environments in order to thrive. These many types of moss can be broken down into two parts: pleurocarps and acrocarps.

Pleurocarpous mosses are known for their growth habits which have them spreading out into a carpet rather than growing upward. Over time, they grow in a creeping fashion, and because of their flat surface area, this moss is easier to maintain.

Acrocarpous moss grows upright and will branch out extensively and grow slower than pleurocarps. When broken up, acrocarps also do not regenerate their fragments as quickly as other moss.

When it comes to moisture, both species react differently. Pleurocarps tolerate constant moisture and will even continue to grow when submerged which allows them to continue growing. Acrocarps, on the other hand, must dry out periodically to prevent rotting, which is why they grow more slowly.

Because pleurocarp mosses constantly utilize moisture and continue branching out indefinitely, they can double their size in six months.

Acrocarpous moss has a slower growth period due to the drying out and the fact that it grows upwards before branching out. In order for it to stretch out enough to become a carpet of moss, the process of growth could last as long as two years.

Dicranum or rock cap moss is a dense, dark green plant that grows well on rocks and bricks. In order for this moss to survive, a deeply shaded growing environment is necessary as direct sunlight can “burn” the moss and turn it an unattractive brownish yellow.

To ensure that it grows properly within six weeks, plant it during the early spring or the late fall before leaves fall off of the trees and litter the ground as this moss needs direct contact with the soil to thrive.

Also known as Polytrichum, hair cap moss is a bit more robust than the other options with a more leafy appearance that is often used in yards in place of grass.

In this case, the filaments more resemble roots, so they have an easier way of adapting to the new soil. It can be grown in slightly sunnier environments, but partial shade is best.

Going by the scientific name Leucobryum, cushion moss is usually lighter green in color with a mix of silvery-white, which is why it is sometimes known as white moss.

The ideal planting environment for cushion moss is within a sandy soil with plenty of shade. However, if it gets partial sunlight during the day, it will be fine. You will know that this moss is thriving when you see it growing in a round “cushion” shape.

Sheet moss, or Hypnum, is one of the most popular mosses used in yards due to its high transplant success rate, and many homeowners also use it instead of grass. This kind of moss is most successful in shady yards as it will not fare well with frequent periods of hot direct sunlight.

Many people also use this moss in between stepping stones or any other area with light to medium foot traffic. Although it will thrive by six weeks, this moss does not grow tall, which also makes it ideal for moss walls.

Although it is technically a perennial, scotch moss is popular in yards and around stepping stones. It can tolerate warmer weather, but shade and ample water will help it grow properly.

This is another moss that grows outward in a sheet-like form.

Small patches of this moss will reach proper health and their true color in six weeks and it can grow several inches during the year. However, when it grows outward, it takes more time, creating a healthy mat in two to three years.

Reindeer moss is technically a lichen, but it resembles a moss due to its low growth. This “moss” is typically found in Arctic lands and grows much slower than the other real mosses. Even under ideal circumstances of high humidity and cool temperatures, it only grows at around 3 to 5 mm per year.

Due to the low maintenance nature of the various types of moss, many homeowners find it to be an easy endeavor to transplant moss to their yard or as a decorative feature. The process is simple, and within six weeks, you’ll have your own moss!

6 Best Compost Starters For Your Tumbler