The eastern redbud is a flowering tree that is beneficial to the gardener and the local wildlife. If you're considering a tree for your yard, you know you have to determine where to plant it in order to avoid damaging your home. So, where should you plant an eastern redbud? We've conducted thorough research and can tell you the answer to that question!

Eastern redbuds can also be pruned and kept as a shrub. In these instances, you should plant your redbud a minimum of eight feet away from existing structures. It will be important to keep it trimmed so it doesn't get too tall.

The eastern redbud is a versatile tree that can be planted fairly close to your home. Keep reading to learn more about how far from existing structures you should plant this tree, where to plant it, and more!

How Far To Plant Eastern Redbud 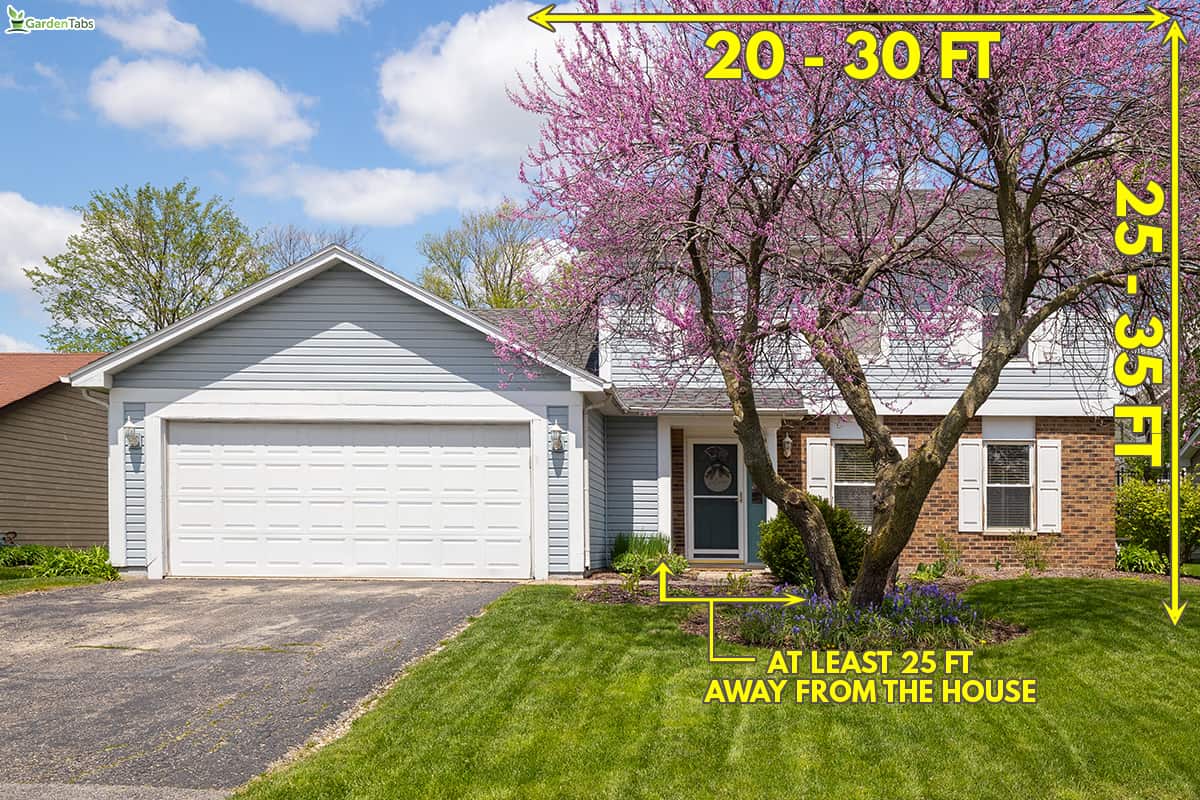 When determining how far away to plant trees, you have to consider the height, width, and root system of it once it reaches maturity. When grown as a tree, eastern redbuds can have a mature height between 20 and 30 feet and a mature width between 25 and 35 feet.

If you want to grow the eastern redbud as a tree, then you'll have to plant it at least 25 feet away from your house.

You should also be careful of any large structures nearby, such as electricity poles, other trees, and balconies. Small trees, like redbuds, should be fine to grow adjacent to overhead items. However, you'll need to monitor its growth to ensure it doesn't grow through things you don't want it to.

If the soil allows for it, eastern redbuds can develop a very deep taproot. However, if the soil conditions don't allow for that, the taproot will develop horizontally instead.

After the initial taproot comes in, eastern redbuds produce secondary roots. These roots grow very quickly and will spread horizontally.

Eastern redbuds are great street trees because their shallow roots aren't very strong. So, despite not extending very deeply, they shouldn't cause much damage.

Keep in mind that roots will grow towards a source of water. So, if there is a leak on your property, the root system will expand toward it. If any cracks are present, roots will be able to grow into them.

Eastern Redbud As A Shrub 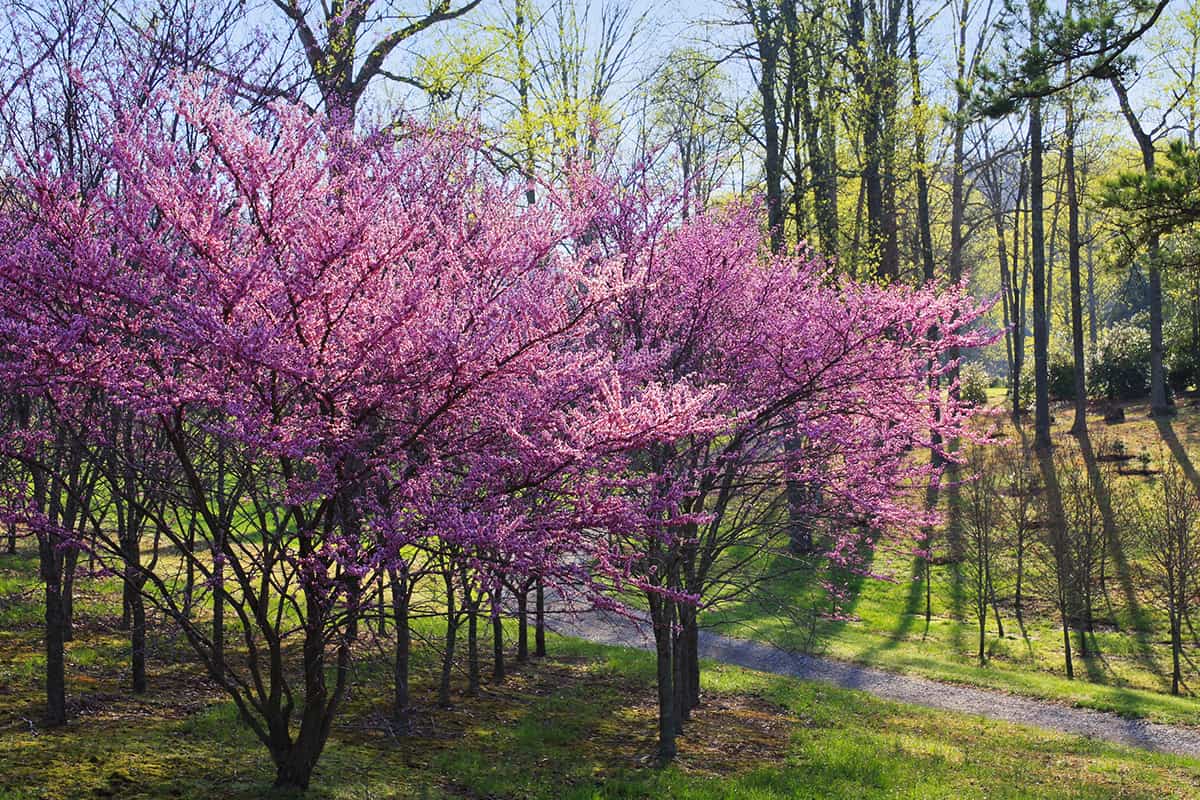 With frequent pruning, you can keep your eastern redbud small. Regular prunings will inhibit root growth which means you can plant it much closer to your home.

If you plan on using the eastern redbud as an accent or border plant, then you should place it a minimum of eight feet away from your home.

For landscaping advice, take a look at this post: What To Plant Under Redbud Trees [Flowers, Grass, & More!]

Check out this live redbud tree on Amazon.

How To Prune A Eastern Redbud 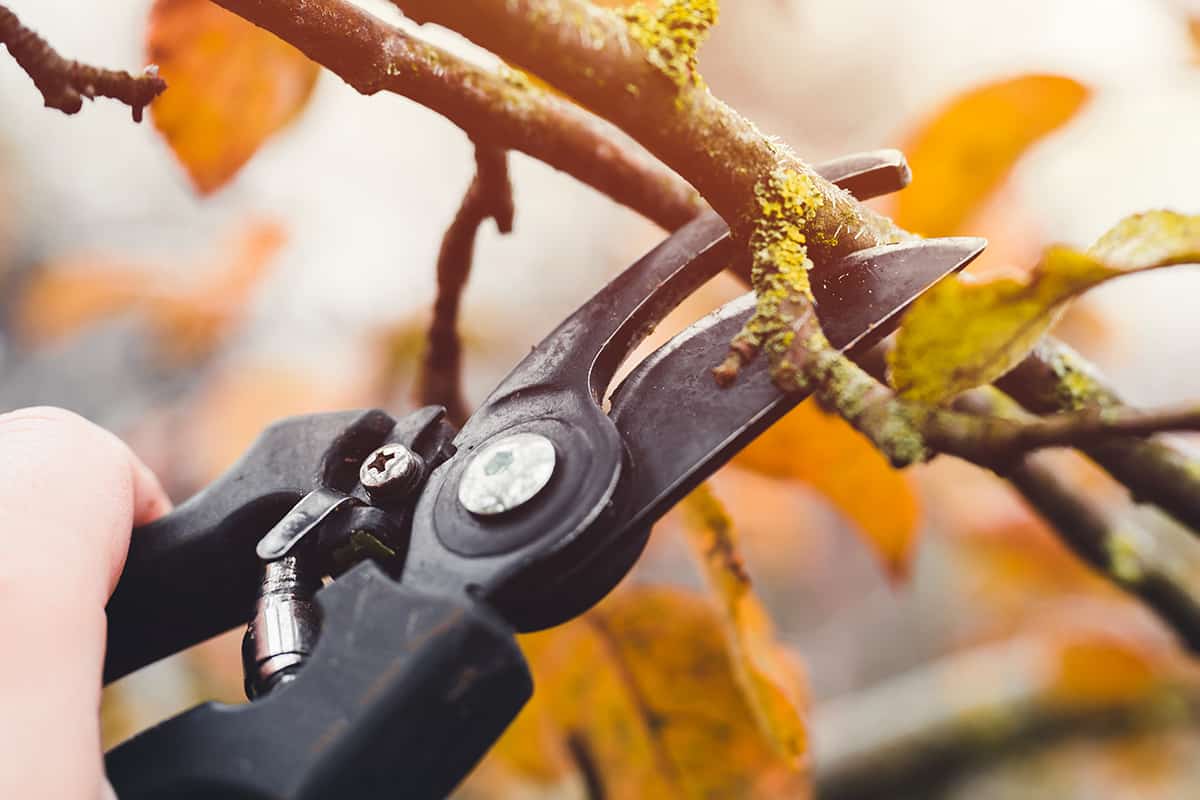 Pruning your eastern redbud is important if you want to control its size, remove dead or diseased limbs, or control its shape.

In general, you should save extensive pruning and removing dead or damaged branches for the late winter or early spring months. Pruning to maintain or control shape should be done in the summer months.

While most pruning can wait, some diseases need to be immediately removed. Cankers and Verticillium rot should be removed as soon as you notice them.

Cut branches between three and four inches below the affected area. Inspect the area pruned. If the wood doesn't appear healthy, prune further.

Whenever doing extensive pruning, you should wait until the redbud is dormant. If you plan on pruning in the spring, try to do it before the tree produces sap. You can prune during this time, but it will be messier.

Your first cut should be made under the branch, approximately five inches from the collar of the tree. Be careful not to cut all the way through.

Your next cut should be made between two and three inches away from your first. This time you should slice from the top and go all the way through.

After the branch falls, you can cut all the way back to the collar. This will remove the part with the first cut you made.

Check out this pruning saw on Amazon.

You should remove low-hanging, crossing, or obstructive branches and water sprouts in the summer after the leaves are at their biggest.

Use pruning shears to remove any branches growing inward. Then, determine if any other parts should be removed or trimmed.

Don't remove the lower branches of the tree too quickly. If you remove too many, you'll shock the tree. Try to only remove one or two branches a year until you get the shape you want.

It's very important to sanitize your tools when you prune eastern redbuds. Use rubbing alcohol to clean your pruning tools between cuts. If you don't have rubbing alcohol, you can use a bleach and water mixture. Mix one part bleach with ten parts water.

This should be done with all pruning. However, it's especially important if you're removing diseased branches. Not cleaning your tools can spread the disease to other parts of the tree.

Where Is The Best Place To Plant Eastern Redbuds? 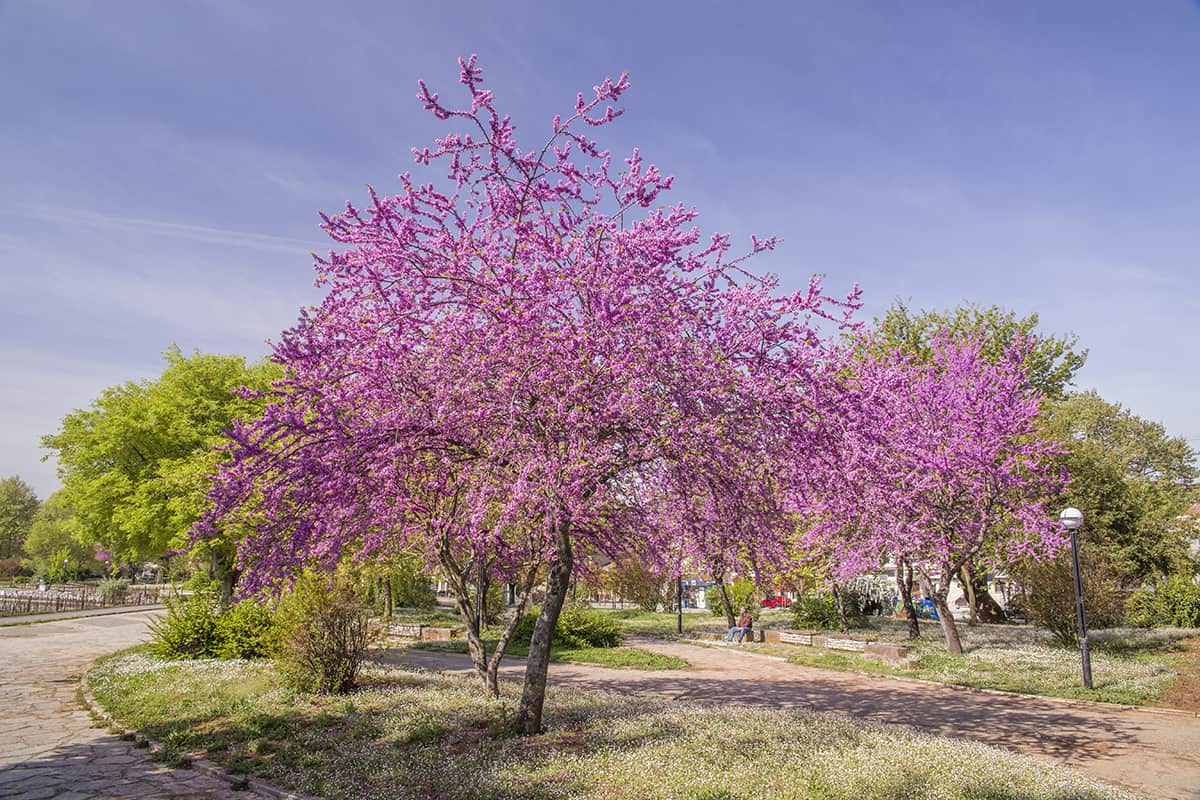 Since these trees are tolerant of such a wide variety of conditions, you can plant them in most places of your garden. The eastern redbud is hardy for USDA Zones 4a through 9b.

These plants will do well in a variety of soils and pH levels. However, they don't appreciate overly wet soils. So, if you have clay soil, it will be vital for it to be well draining.

Eastern redbud branches tend to break frequently. So, you should try to plant them in an area that is protected from strong winds.

It will also be important to put them in a spot that gets at least four hours of sun each day. Keep in mind that you will get better flowers if planted in an area that gets closer to eight hours of light each day.

Eastern redbuds don't tolerate transplanting well. These trees grow quickly within the first few years of planting. Moving them will be difficult because of this and the deep taproot they develop. So, it's important to pick the right spot before planting.

Check out this post for more advice: Can Eastern Redbuds Be Planted In Full Sun?

Is The Eastern Redbud A Good Tree? 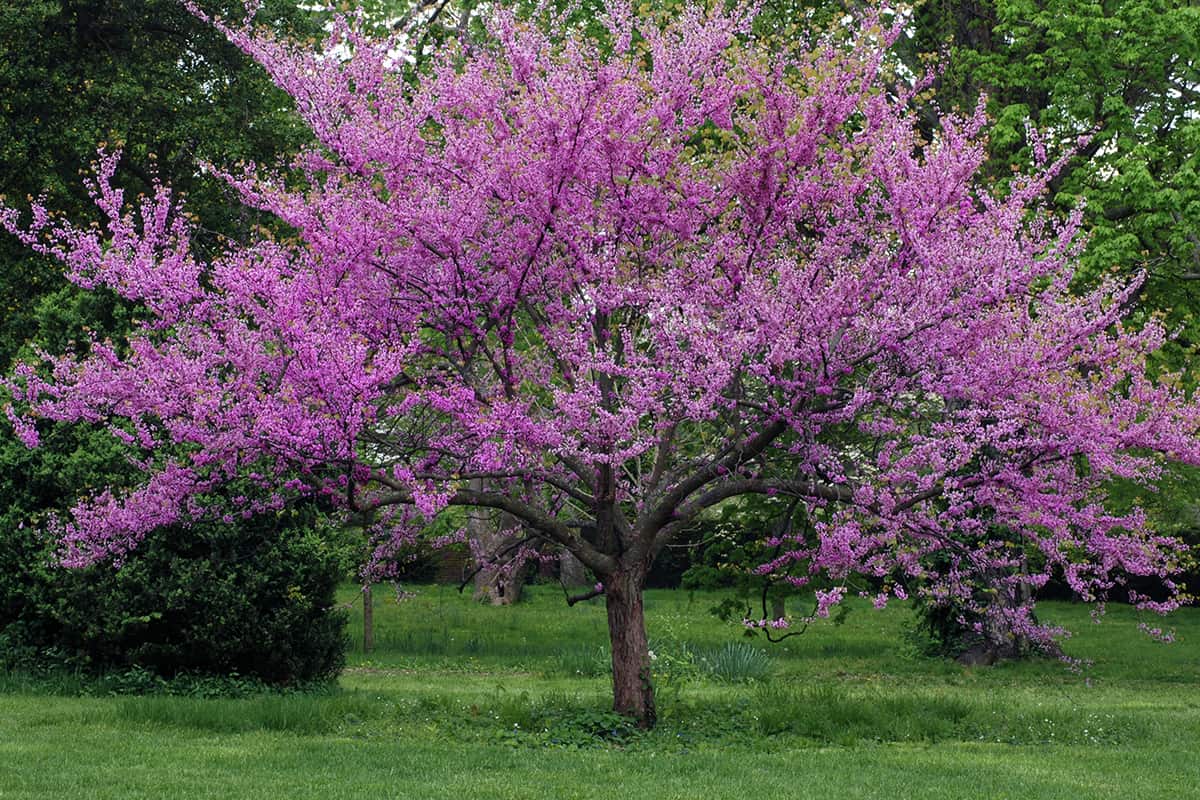 Despite being short lived and dealing with diseases, the eastern redbud is a very good tree. It's easy to grow, can tolerate different soil conditions, and is resistant to several problems, including black walnut and compaction.

While this tree can be low maintenance, it's important to remember that it may need frequent prunings to keep it healthy and maintain shape. You will also have to remove leaves when they fall.

Take a look at this post for more advice: Are Eastern Redbud Trees Messy?

As you can see, eastern redbuds are versatile trees that can be planted as little as eight feet from your house if you want. If you want a larger tree, you should give it more room and plant it at least 25 feet away.