Determining worm bedding depth is a necessary process for farm maintenance. If you're wondering how deep a worm bedding should be, we did some research to provide you with a straightforward answer.

Making shallower and smaller worm bedding is a good place to start. The starting depths should be 8–12 inches. But digging a deeper bed is your best chance if you want more compost and worms.

Keep reading this post to learn more about worm bedding and its importance. We'll also delve into the best practices in creating and maintaining the mixture of materials for your worm bin.

The Importance Of Worm Bedding

Worm bedding is essential. Without it, a worm has no alternative food in case nothing is inside the bin.

If you overfeed and make a specific place sour, the worms have somewhere to escape to safety. Worm bedding is the lifeline of your worms, so never underestimate its significance.

Why A Shallow Worm Bedding? 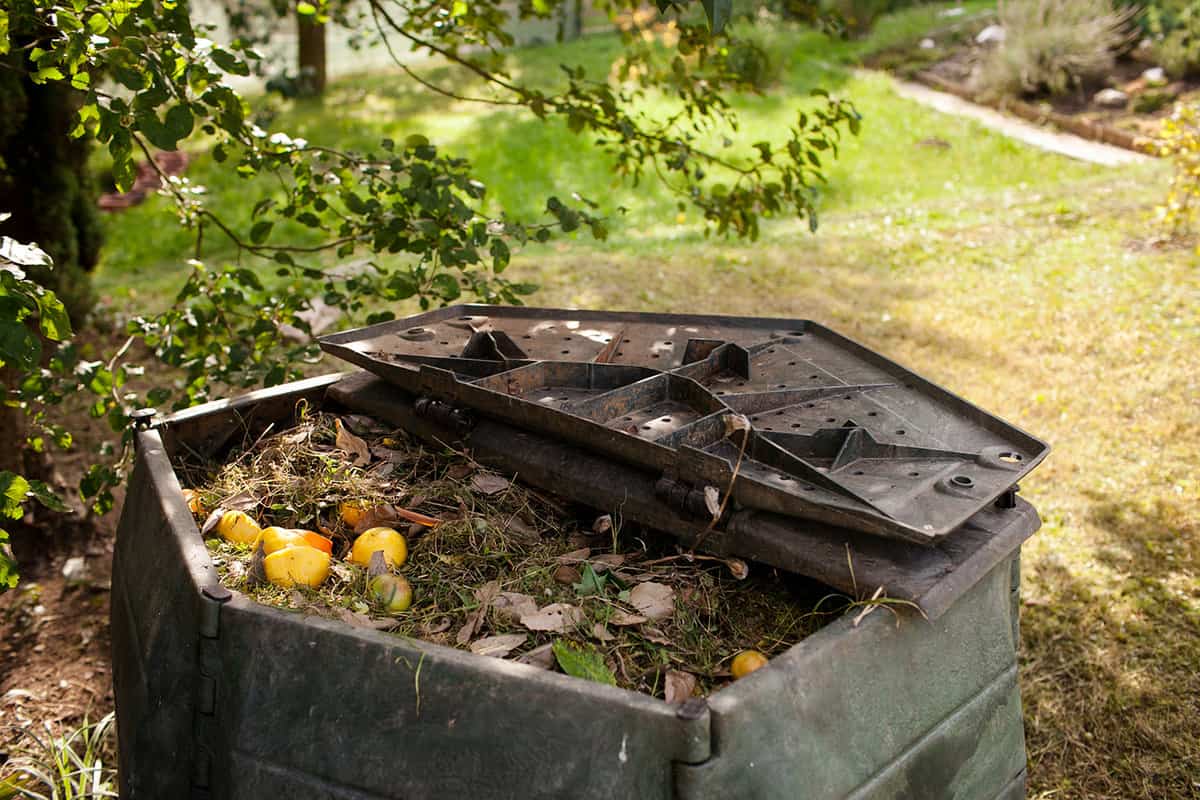 Shallow bins are a must because worms only eat what's on the surface of the bedding. The ideal depth for the container is between 8 to 12 inches.

A bin with too much depth is ideal for greater amounts of compost and worms. Otherwise, it's less effective and may cause odor issues.

What To Use For Worm Bedding? 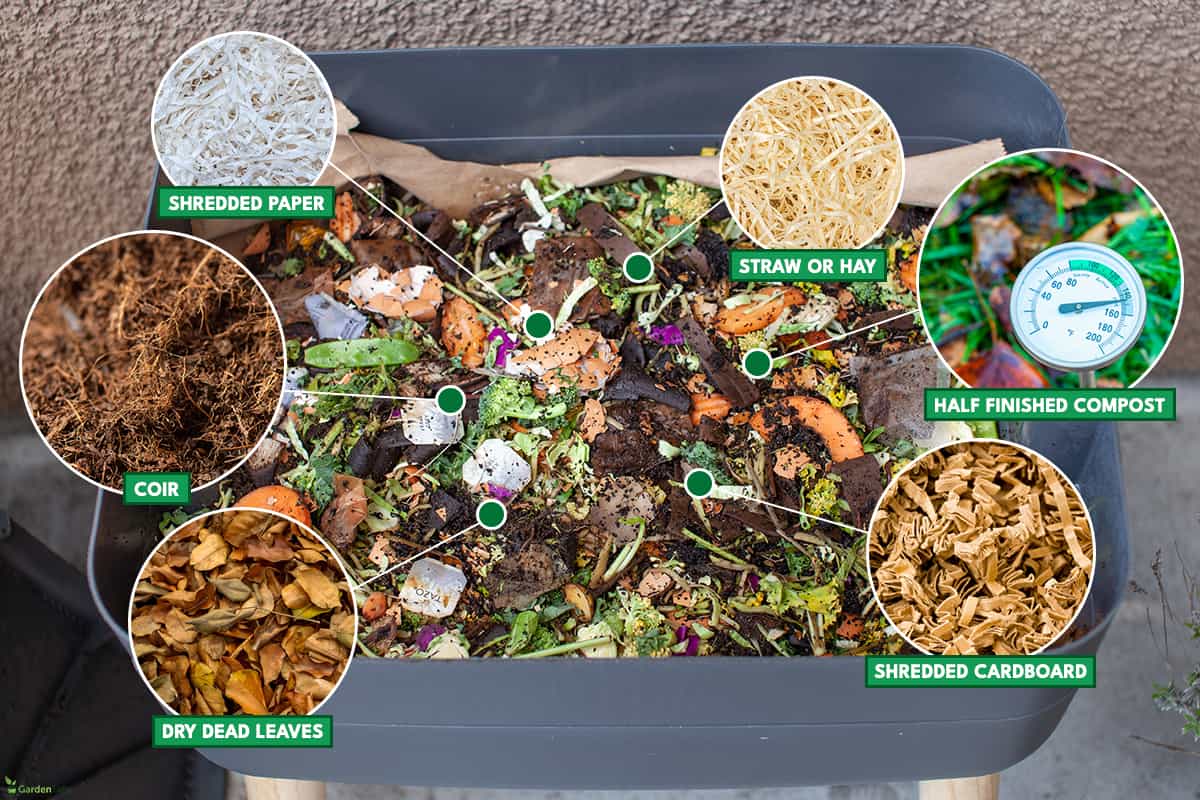 At first, you may base your worm bedding choice on what carbon-rich material is most accessible for you to get. If you're still not sure what to use for your worm bedding, here are the different materials you can go for:

Although cardboard takes longer to decompose than paper, it's a viable food source for worms. Space between the individual corrugated cardboard sheets allows for airflow and worm mobility.

Cardboard is easy to get, and you can probably find some for free. One large box is enough for one bedding.

Corrugated cardboard is a popular choice for worm bin bedding. But it can be challenging to shred or rip into smaller pieces.

Shredded paper makes an excellent worm bin bedding. It has enough bulk to create room for airflow and the worms to wiggle around it, but it also does a great job absorbing and holding in moisture.

Another benefit is that you can easily produce shredded paper, especially if you have a home paper shredder that you use to dispose of sensitive security information.

You can use hay or straw as worm bedding, but unless you reside on a farm, you'll have to buy it. Hay and straw don't retain moisture as effectively as artificial materials like paper and cardboard, which is another disadvantage.

Hay and straw, due to their structure, on the other hand, provide plenty of air circulation and worm movement.

You can use dry, dead leaves as bedding in your worm bin. There is an abundance of them, and they cost nothing. One advantage is that you can throw them away without tearing or shredding them.

Leaves don't have the same capacity to retain water as cardboard or paper, so you may need to add water to the compost to ensure the worms have a good environment to live in.

A heated compost pile is a great bedding as well. You should use components from a hot compost heap roughly halfway through decomposition.

Remember that, unlike night crawlers, red wiggler compost worms don't burrow underground but instead make their home on the soil's surface. Pull some partially finished compost from your pile, wet it down, and use it as bedding in your worm compost bin. 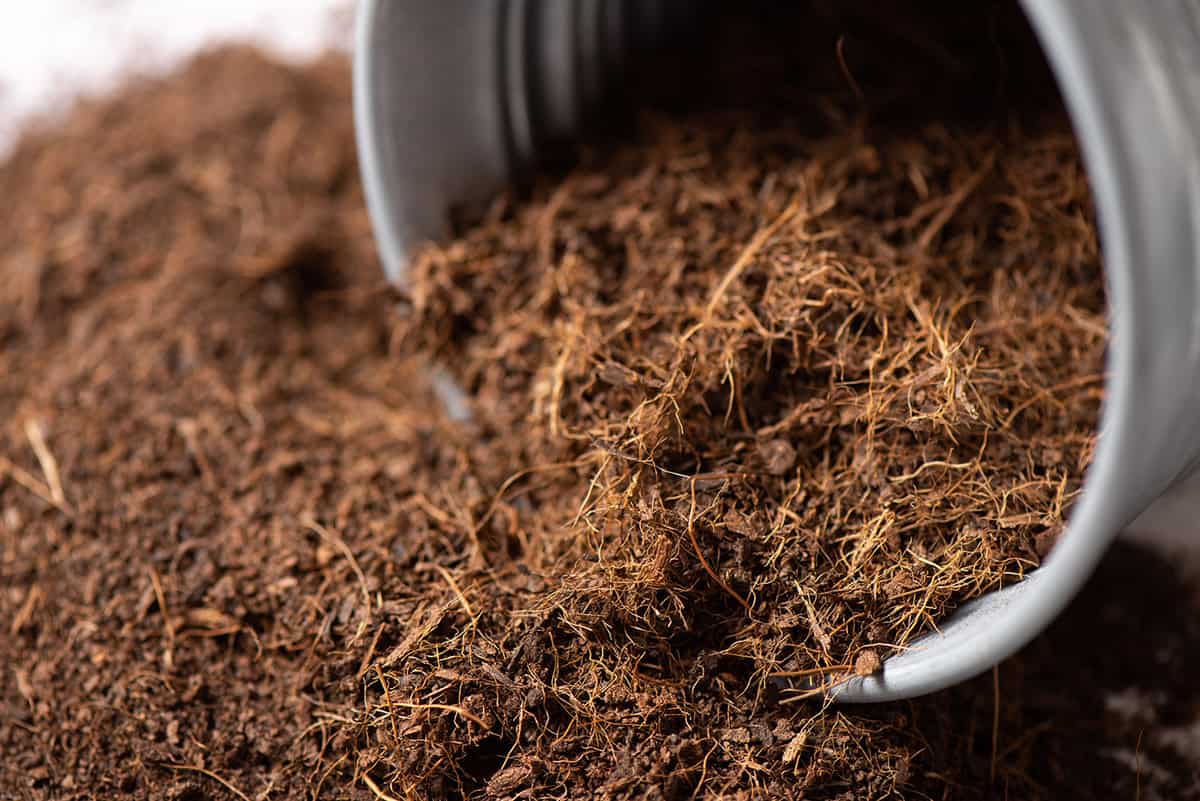 This material is an option you have as a worm bed since it's produced from dried coconut husk and hence fits the bill of being both natural and inexpensive. It's soft, fluffy, and easy to work with, and it does a great job retaining moisture.

Click here to see this natural coir on Amazon.

Newspapers, shredded paper, peat, coconut fiber, wood shavings, and other wood-based materials are all acceptable forms of worm bedding. These are the materials in which your worms surface, and they are also the ones in which they prefer to spend their time when they aren't feeding.

Characteristics Of A Good Worm Bedding

Worm bedding will help worms thrive and be at ease as long as it has the following characteristics:

How To Add Worm Bedding To Your Bin 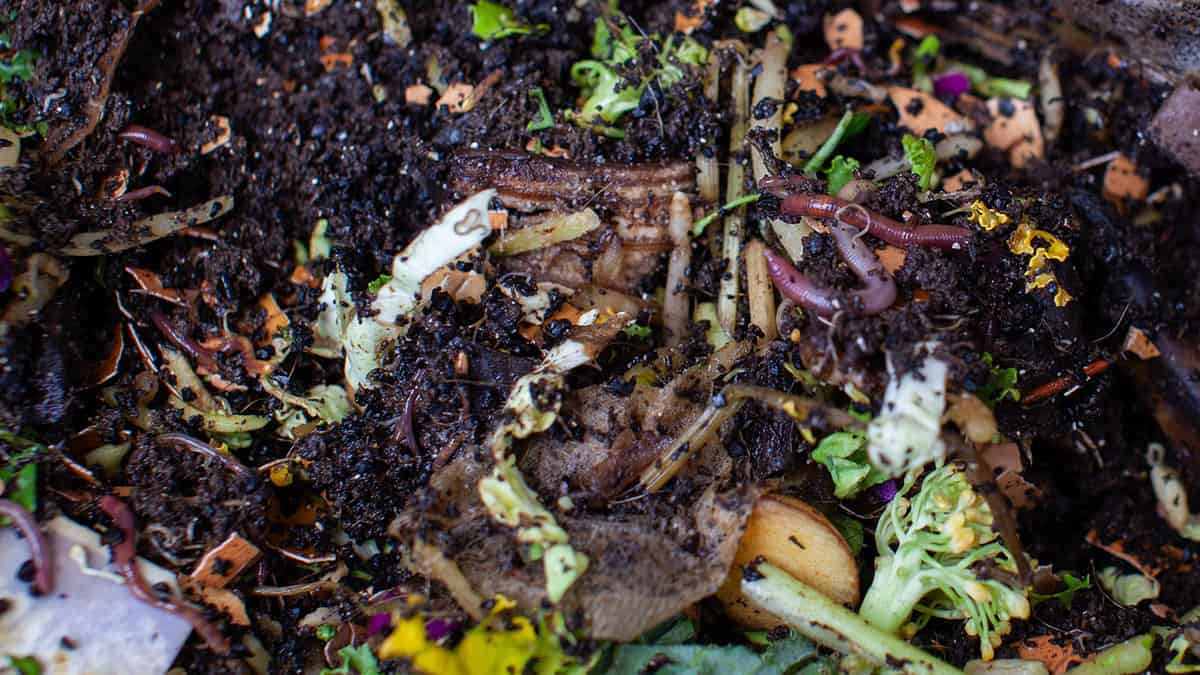 Here are some quick tips to get you started using the right materials to their full potential. If you do not have the resources to make your worm bin, you can always purchase one on Amazon for a low price.

Below are simple steps to add worm bedding to your bin:

Select your materials carefully and get rid of anything that could be dangerous. You can start by sifting through your home for items that could serve as safe worm bedding.

You must ensure that the material you use poses no threat to the worms by removing any potentially harmful substances. Remove any harmful materials from papers, such as staples, globs of glue, or tape.

Shredding can begin once the materials have been sorted. You can shred them into small pieces for this procedure. This will make it simple to add them to other materials and turn them into compost.

Soak the shredded material in water. It can aid in flushing out any lingering pollutants.

Keep in mind that worms and red wigglers have specific preferences for moisture levels.

Squeeze the excess water by straining and squeezing the materials. Moisture is necessary for making bedding, but too much can lead to problems. Squeeze and test the wet items to reach the ideal moisture level. Consider using a salad spinner if the material has wood particles on it.

Break down the material into smaller pieces. Once you start squeezing it, it may hold together as one and shape itself into a ball. Separate it into pieces. After that, you are free to make the substance more fluffy.

It does help in making essential components of the bedding. In that instance, you can fold them all up into a single unit after spreading them out evenly before adding the worms.

If you are looking for a worm bin, you can find a good one online.

Check out this worm bin on Amazon.

The Ideal Moisture For A Worm Bedding 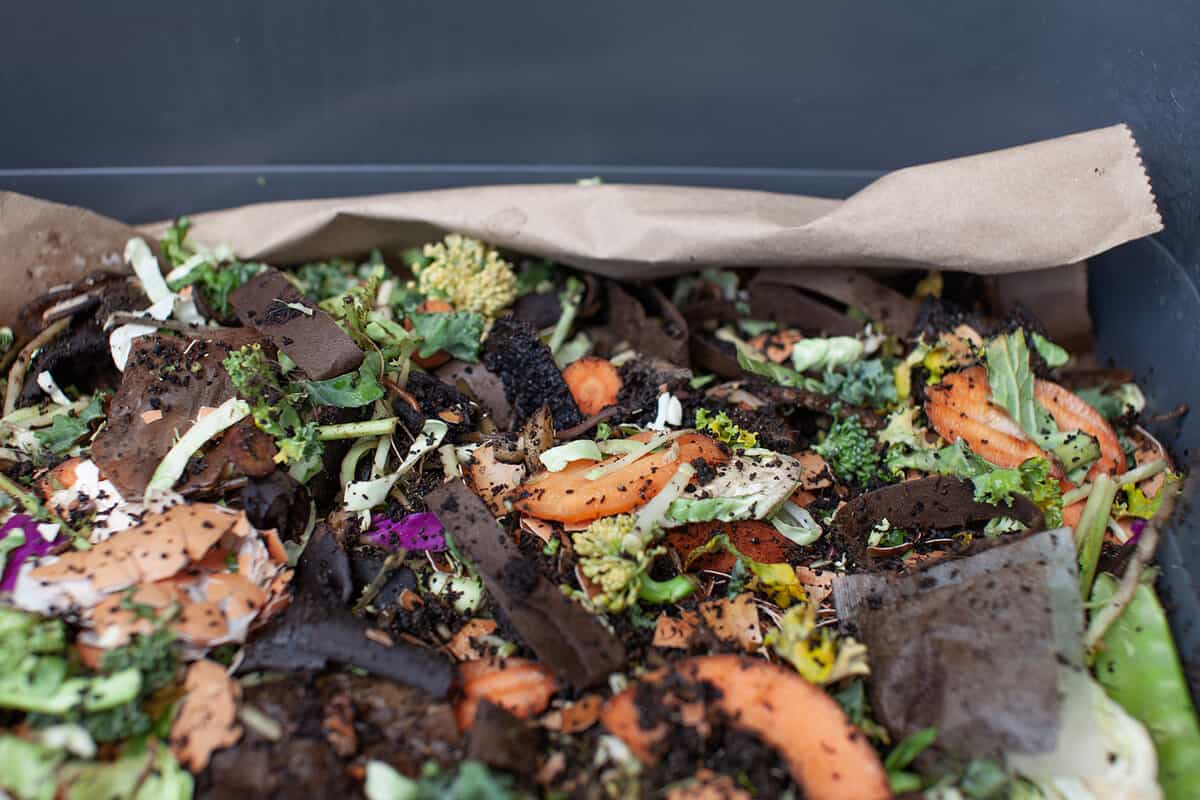 Proper moisture in your worm bedding is crucial for the health of your worms. Extreme wetness might cause the bin to become dirty and stinky. Worms may not have as much oxygen if their bedding is too damp.

So, when creating worm bedding, you want to ensure it doesn't get too dry or too wet. The general recommendation is to provide worm bedding with about 80% moisture.

When the bedding becomes excessively concentrated with worm castings, it's time to replace it. In addition, the bedding you have and the number of worms you're trying to nurture will dictate how often and when you need to change the bedding.

If worms are already abundant, replace the worm bedding as often as possible. It's also important to pay attention to the bedding material. For instance, if you're using peat moss, you should replace everything every two weeks to prevent protein intoxication.

It might look easy to dig deep for worm bedding, but proper depth of worm bedding is necessary when starting your worm farm. Knowing the materials you can use as bedding, the required amount needed, and how deep they need to be is important for farm maintenance.

Check out  these posts if you want to discover other options besides worm bedding:

Can I Put Worms In My Compost Tumbler?

What Can Go In A Compost Tumbler?