Do you find your Cub Cadet riding lawnmower too slow. Mowing your backyard takes up too much time, and you want to know if you can speed it up? You’ve come to the right place, for we have researched this question, and we have the answer for you.

The safest way to increase the speed of your Cub Cadet is to swap out the pulley for one with a bigger diameter. Additional modifications to speed it up include:

Let’s talk more about the ways to speed up your Cub Cadet riding lawnmower in the succeeding sections. 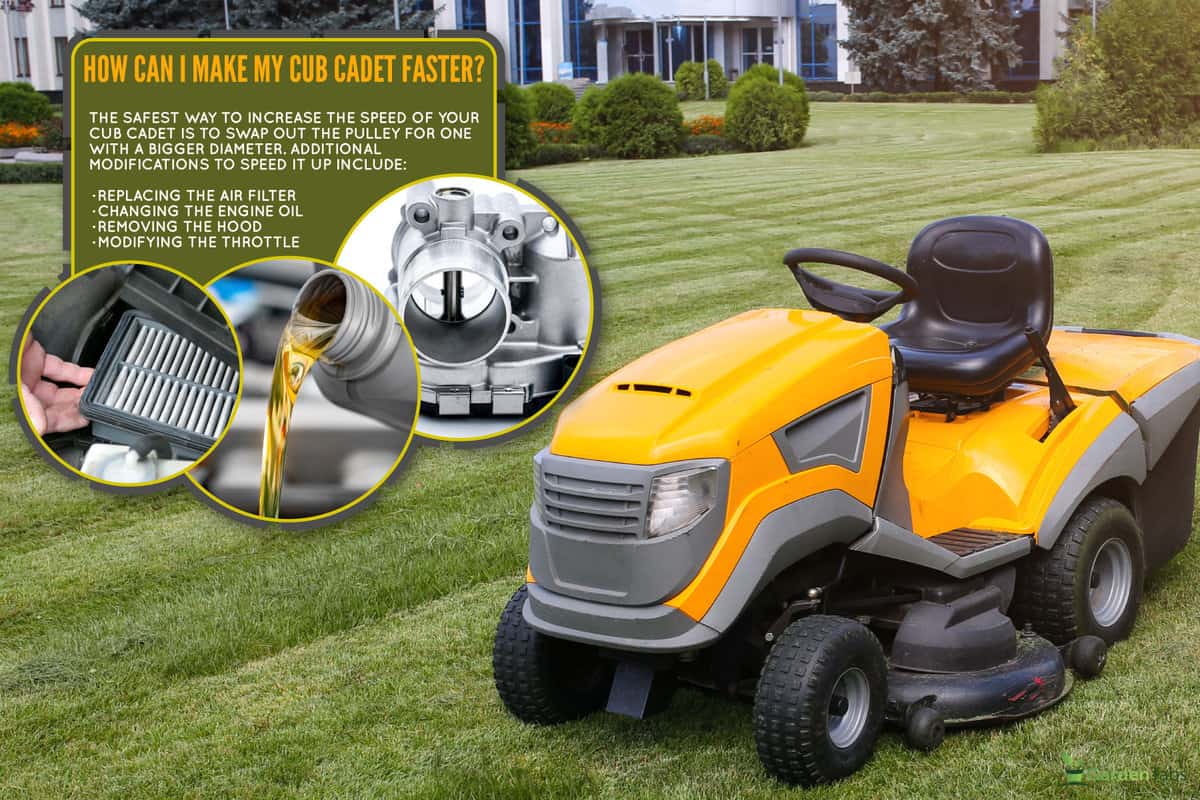 What is a riding lawnmower?

A riding lawnmower, riding mower, ride-on mower, lawn tractor, or tractor mower is equipment that allows you to mow a large area in less time and effort.

A riding lawnmower’s operator rides on the lawnmower like a go-cart. It has grass-cutting blades between the two pairs of wheels. Most riding lawnmowers have controls that are like those of a car—it has a steering wheel and brakes.

The engine of riding lawnmowers is powerful enough to provide power to the blades and the wheels, plus a little extra. Some models can have accessories like lawn sweepers, aerators, and baggers that the engine can power, too.

The engine of a riding lawnmower can be powered by gasoline or electricity through batteries. And because there is very little to no soundproofing in them, it is important to wear hearing protection as well as eye protection and heavy footwear.

There are several subtypes of riding lawnmowers with specific differences. Let’s take a closer look at those below. 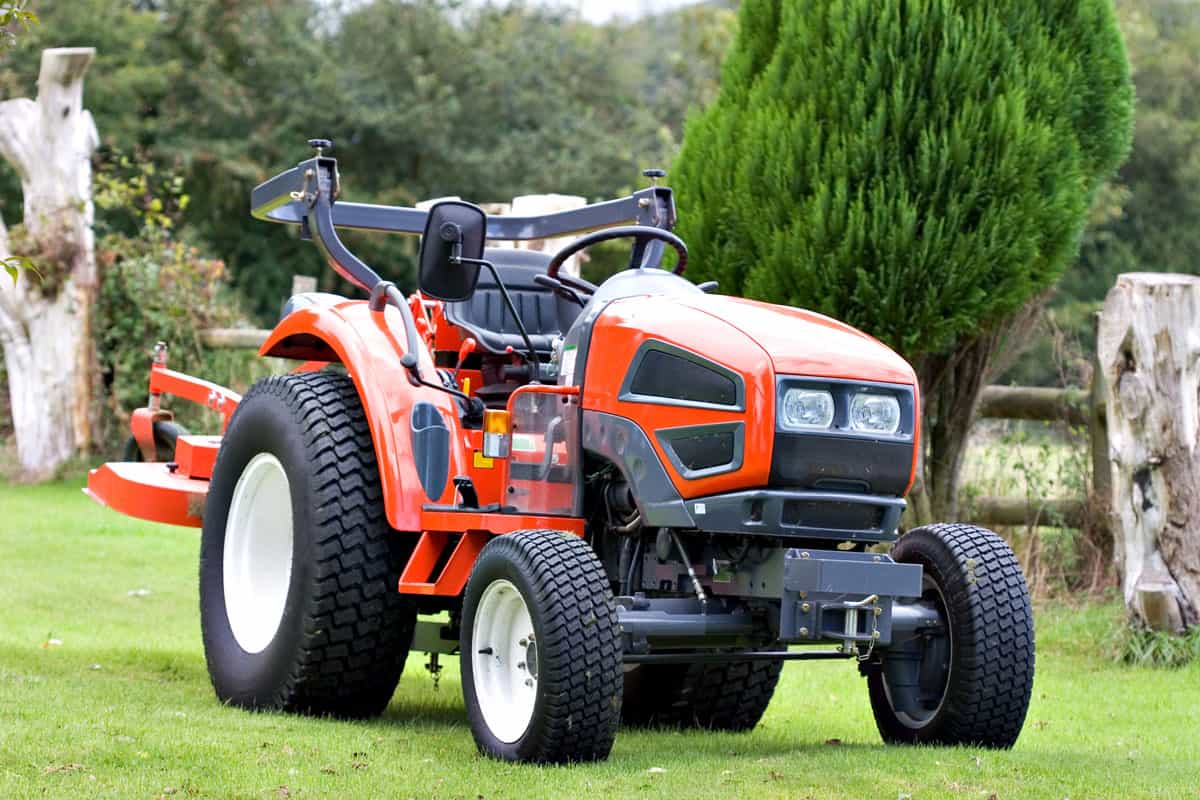 This is the type of riding lawnmower that most people are familiar with. It has a front-mounted engine with controls reminiscent of a standard automobile. It looks like a miniature version of a farm tractor.

Modern lawn tractors have optional accessories that can help you maintain your lawn. Since the engines in this type of riding lawnmower have extra power for accessories, you can easily modify them for extra speed.

This type of lawn mower is smaller, lighter, and more agile than a lawn tractor. As its name suggests, the engine is at the back of the lawnmower rather than at the front. Because it is smaller, it has narrower blades.

A rear engine rider often has its engine under the seat. This is made possible by a smaller and less powerful engine, which makes this a cheaper option. Its smaller engine has only enough power for the blade and wheels.

The downside is that it cannot expand its capabilities through add-on accessories. It is a singular-purpose lawnmower.

The unique feature of this riding lawnmower is that it has a different set of controls. It is a more powerful version of a rear-engine rider type.

It uses levers to control speed, braking, and direction. The different controls make it intimidating to use at first.

The levers allow it to turn 360 degrees, making it mobile and creating crisp cut patterns on the grass.

It has more powerful engines, allowing it to offer multiple add-on options and functionalities. It has better safety features than any of the other riding lawnmower types. 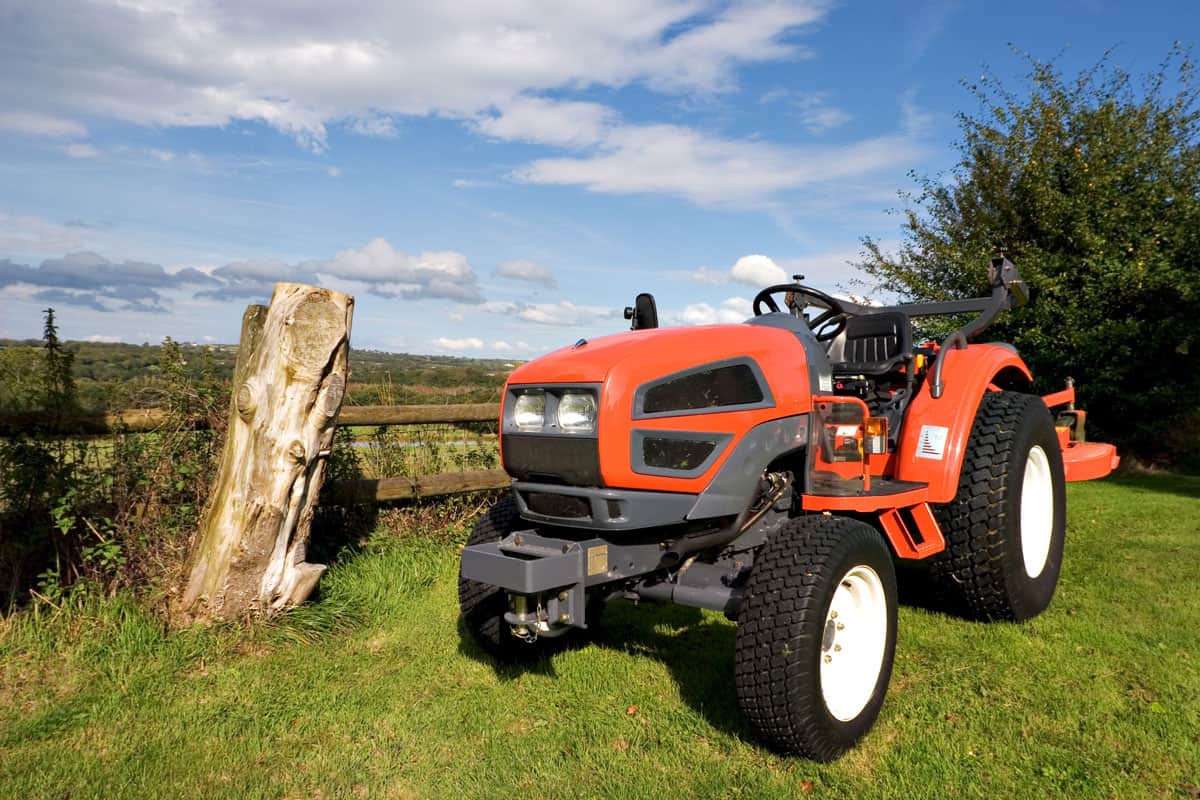 This type of riding lawnmower is like a lawn tractor that has a few more levels.

A garden tractor is no longer just a riding lawnmower. Its more powerful engine allows it to have accessories that expand its functionality, like plowing snow, tilling, and even towing.

How to speed up your Cub Cadet riding lawnmower? 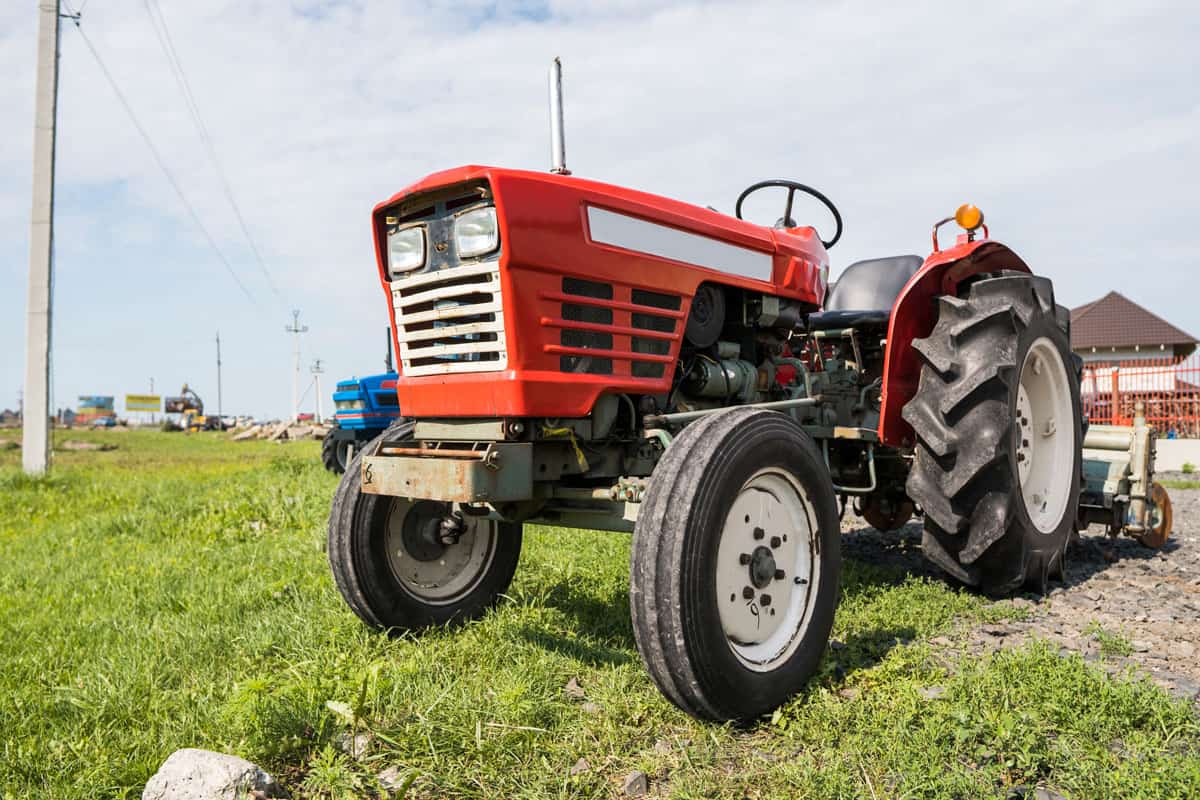 Cub Cadet riding lawnmowers can either have the single cylinder engine or the dual cylinder engine that can produce up to 25 horsepower. Tapping the engine’s true power can easily net you additional speed.

The original pulley coming from the engine of a riding lawnmower is small. It goes to a large pulley that provides power to the blades. A riding lawnmower has multiple blades, allowing it to cut grass faster and more efficiently.

There is another pulley that goes to the gearbox to move the riding lawnmower forward or reverse.

And don’t forget to replace the belt to match the new and bigger pulleys.

You can also swap out the rear tires for bigger ones. Although, this might require you to make other changes to the lawnmower, like increasing the clearance between the wheel and the rear fender.

How to replace the air filter on a Cub Cadet? 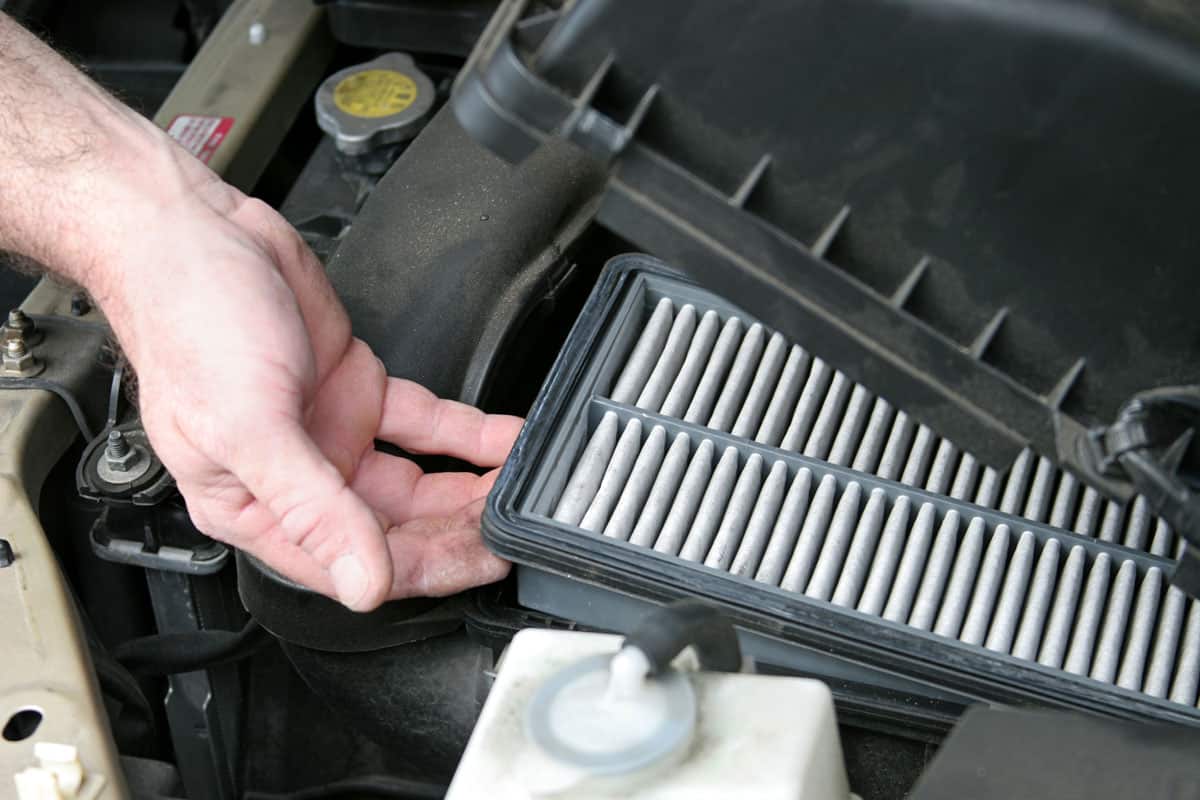 Follow these simple steps to replace the air filter on your Cub Cadet riding lawnmower.

Panari 7000 series Air Filter for Cub Cadet is available on Amazon through this link. 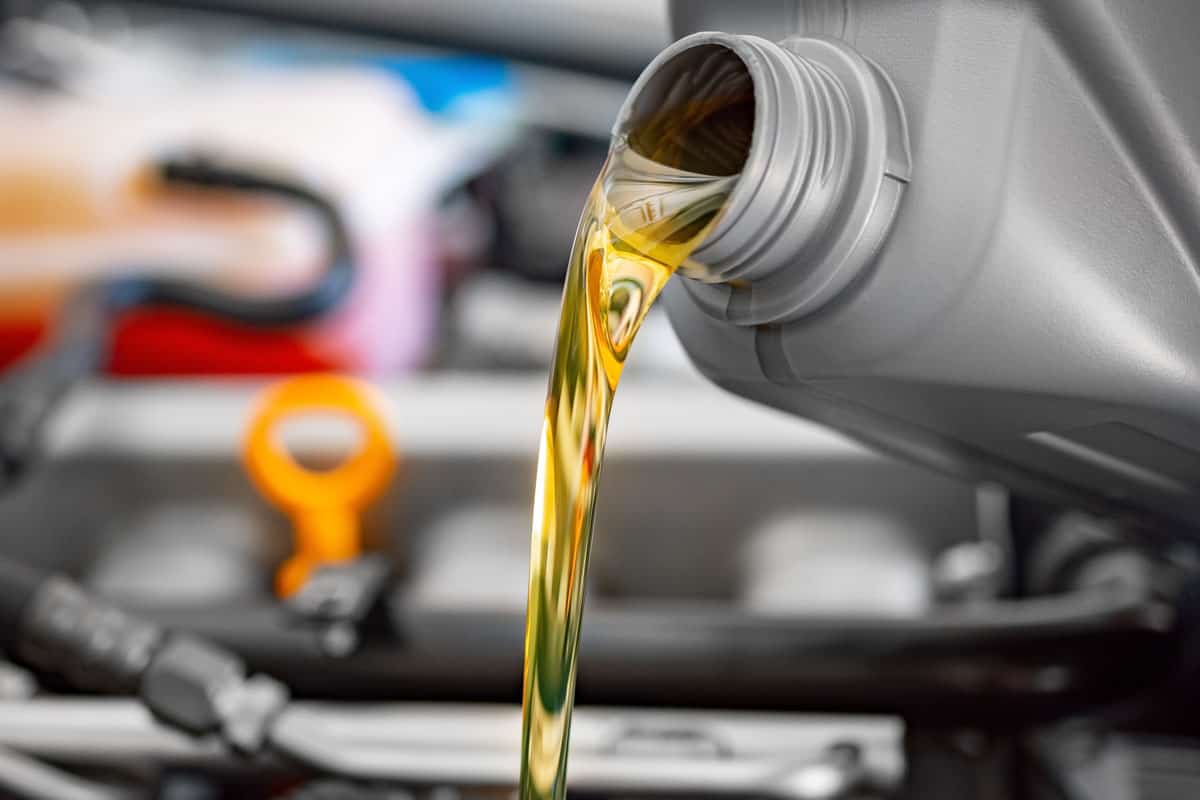 It’s no secret that the engine oil keeps your lawnmower's engine well-lubricated, letting the engine parts move more freely. This allows your engine to maximize the energy that it gets from the fuel. And this allows you to get more power from the engine.

Removing the hood allows your lawnmower to get more air easily. This provides your engine with better combustion. Better combustion leads to more power and more speed.

Moreover, this reduces the overall weight of your lawnmower. The lighter overall weight means that the engine has more extra power that can go to making it run faster.

You can look for other non-essential parts of your riding lawnmower. Remove these parts to shave off extra pounds off the total weight to let you add more speed. 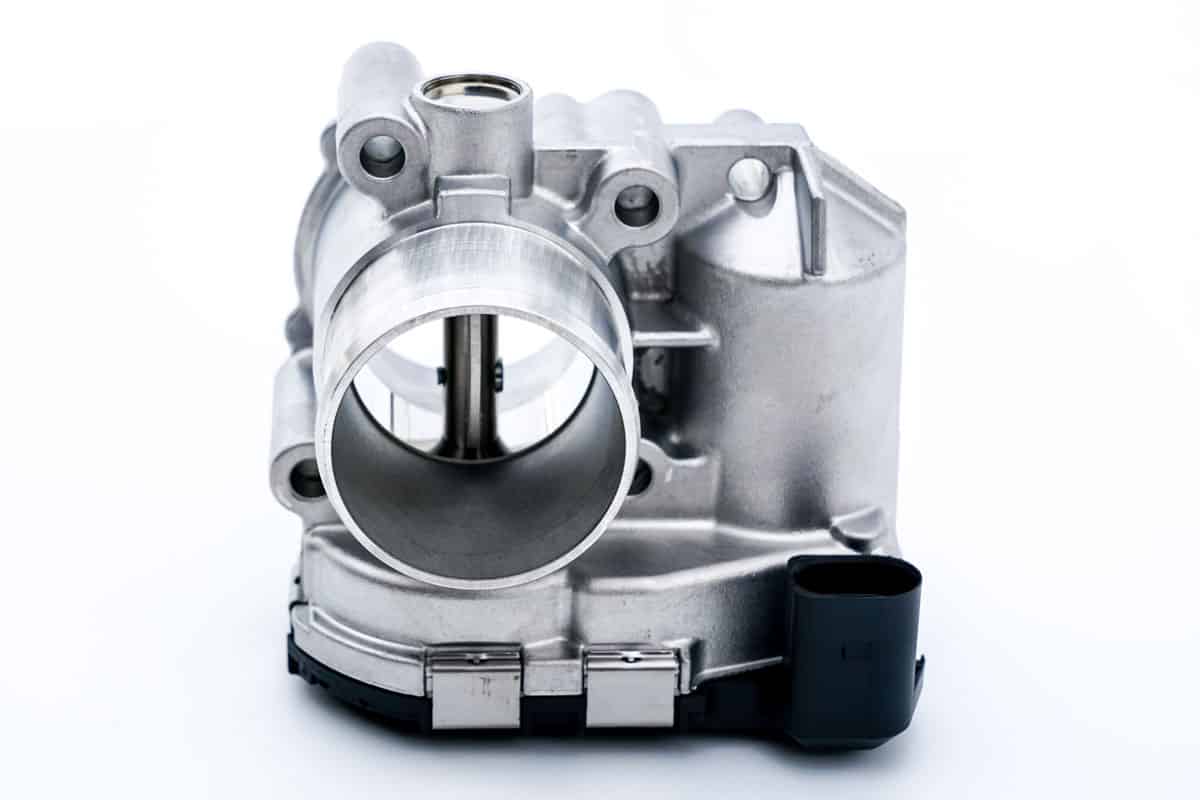 All riding lawnmowers have a throttle limiter or a “governor.” The governor’s primary purpose is to increase the lifespan of the lawnmower's engine because it wouldn’t allow you to get the lawnmower to a very high RPM. It also reduces the amount of maintenance that the engine would need.

Removing the governor in your Cub Cadet riding lawnmower will allow it to reach higher RPMs by allowing more fuel to get into the engine. This will directly result in higher speeds.

Keep in mind that getting higher RPMs in your lawnmower can make it consume more fuel and produce more heat faster. You should change the engine oil twice as often to help protect the engine from additional friction caused by higher RPMs.

Moreover, the additional modifications below can help prepare your riding lawnmower for higher speeds.

The wheel axles of your riding lawnmower—especially the front ones—are not made for high speed. If you’re going to speed up your lawnmower, you also need to make sure that the axles will be able to handle the extra speed.

Backyards aren’t exactly as smooth as an asphalt road. The occasional bump when you’re going at high speed can damage an axle that is not ready for that kind of impact force. 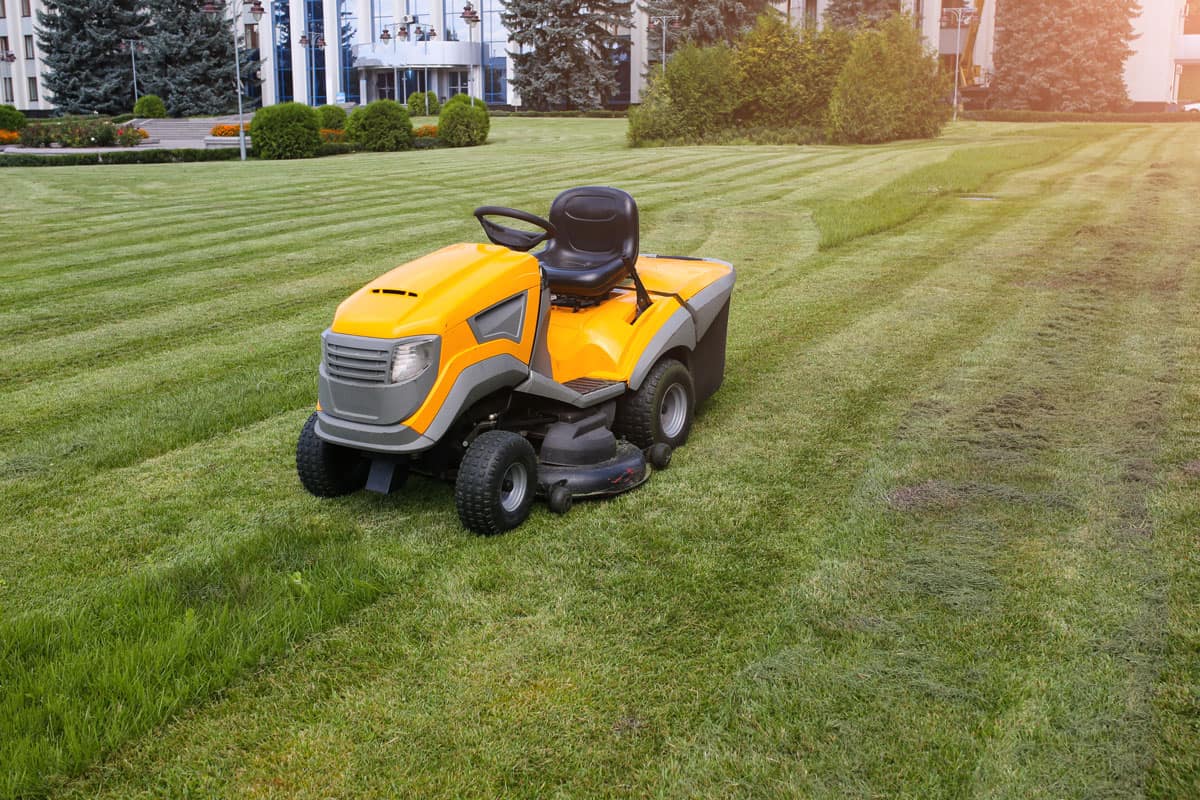 Some riding lawnmower types have engines that pack extra power under the hood. Some simple modifications can give you access to that extra power.

If you enjoyed reading this article, you might find the articles below equally enjoyable to read:

Self Propelled Lawn Mower Too Fast – [How To Slow It Down]

Gas Coming Out Of My Lawn Mower Exhaust – What’s Wrong?