Finding the perfect plant for your home or garden can sometimes be tricky. Do you want to look into getting a venus flytrap but have no idea how big they get? What about their lifespan? Do venus flytraps live for a long time?

We will answer these questions and many others throughout this article. Let's dive right in!

On average, you can usually expect a venus flytrap to live between ten and 20 years. However, this greatly depends on where one is (inside or outdoors) and whether your plant has easy access to flies/small bugs.

When it comes to mature size, a venus flytrap should grow 5-6 inches in diameter. A mature venus flytrap will also have traps measuring 1.5 inches.

As we begin, we will cover all things venus flytraps and discuss how long one should live and how big it will get. Whether you want something new for the window sill or can grow your flytrap outside, we're here to offer some help. With that said, let's get right into this topic below! 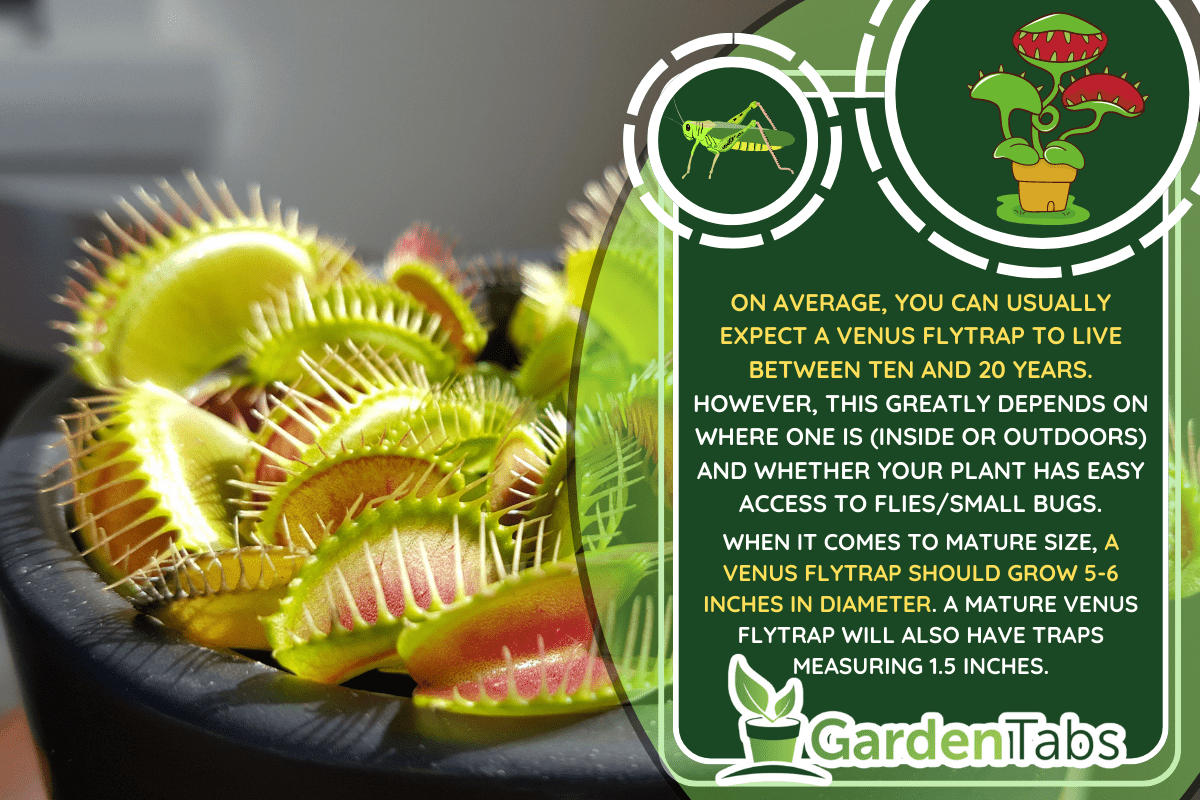 Do Venus Flytraps Get Big? 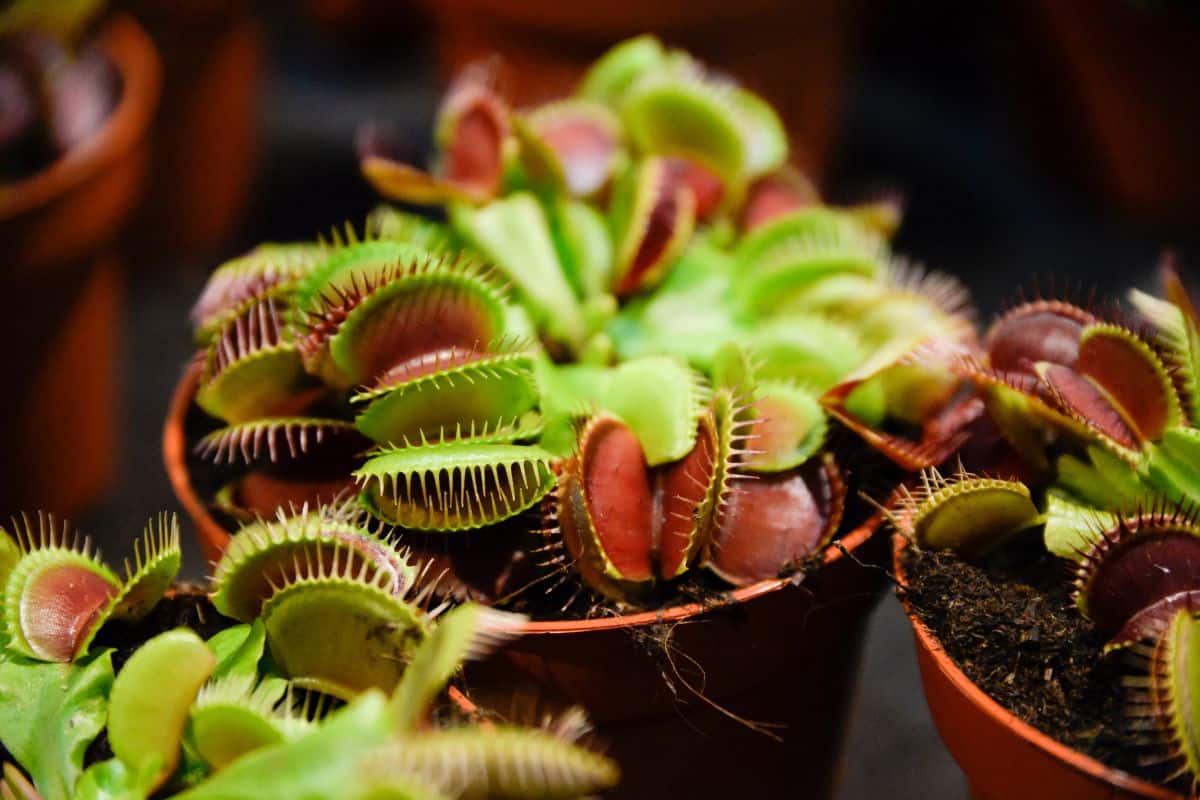 No, a venus flytrap will not become a massive plant inside or outdoors. Generally, your plant will reach a mature diameter of 5-6 inches.

Unlike a sci-fi movie, venus flytraps don't become very large at any point in their lifetime. As we mentioned, each trap on your plant can become 1.5 inches tall, but that's not always the case.

Many people grow their venus flytraps in terrariums with heat lamps, as they don't become very tall.

This can be a great way to watch your plant work its magic from a distance, but you'll need to supply it with flies so it can eat. 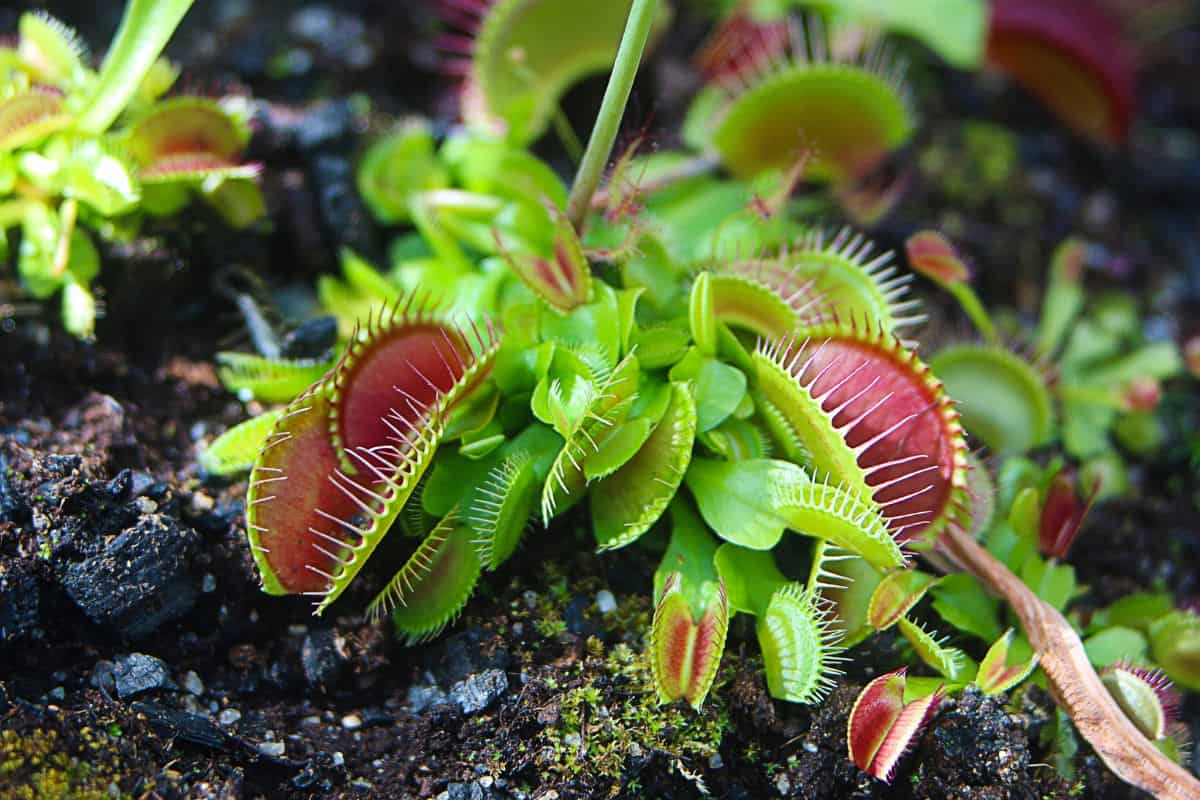 For instance, a venus flytrap typically begins showing its carnivorous traps soon after germination. However, your plant won't flower for 3-4 years, so this is a waiting game.

Considering a venus flytrap can live over two decades, this allows for enough time for your plant to mature (slowly), so don't be discouraged if yours isn't showing much progress.

On the other hand, germination periods for a venus flytrap are relatively fast. You can usually see sprouts within 10-14 days post-planting, so there's good news for you.

It's also worth mentioning that venus flytraps grow faster outdoors, but their ideal conditions can be tricky to replicate.

Yes! One of the many benefits of having a venus flytrap is its lengthy lifespan. As we covered earlier, a typical flytrap will live between ten and 20 years and even longer in ideal conditions.

Furthermore, these carnivorous plants mature rather slowly, so this long lifespan comes in handy.

One thing to note, a venus flytrap relies heavily on photosynthesis to grow, so if yours doesn't have enough sunlight, it could live for a shorter time.

Additionally, venus flytraps need energy from flies/small bugs to develop, so ensure your plant is well-fed and adequately located.

Considering these plants do best in nitrogen-deficient soils, they'll need to get that from the insects they eat.

How Do You Keep A Venus Flytrap Alive Indoors?

For anyone wanting to grow their flytrap inside, this is pretty easy. First, you want to locate a venus flytrap somewhere with bright light.

That said, your plant doesn't need to be in full sun, as this can lead to burning. Instead, a window sill with the indirect sun is fine if you're somewhere in the southern hemisphere, while six hours of sun is needed for anyone in the north.

If you can't replicate these conditions, you can also try placing your venus flytrap underneath a grow light for 10-12 hours daily, which should suffice.

Again, you likely won't need a grow light unless you don't have any sun-facing windows, so think of that as more of a last resort.

It's usually best to let the actual sun shine down on your venus flytrap, as it can photosynthesize properly.

How Often Should You Feed A Venus Flytrap? 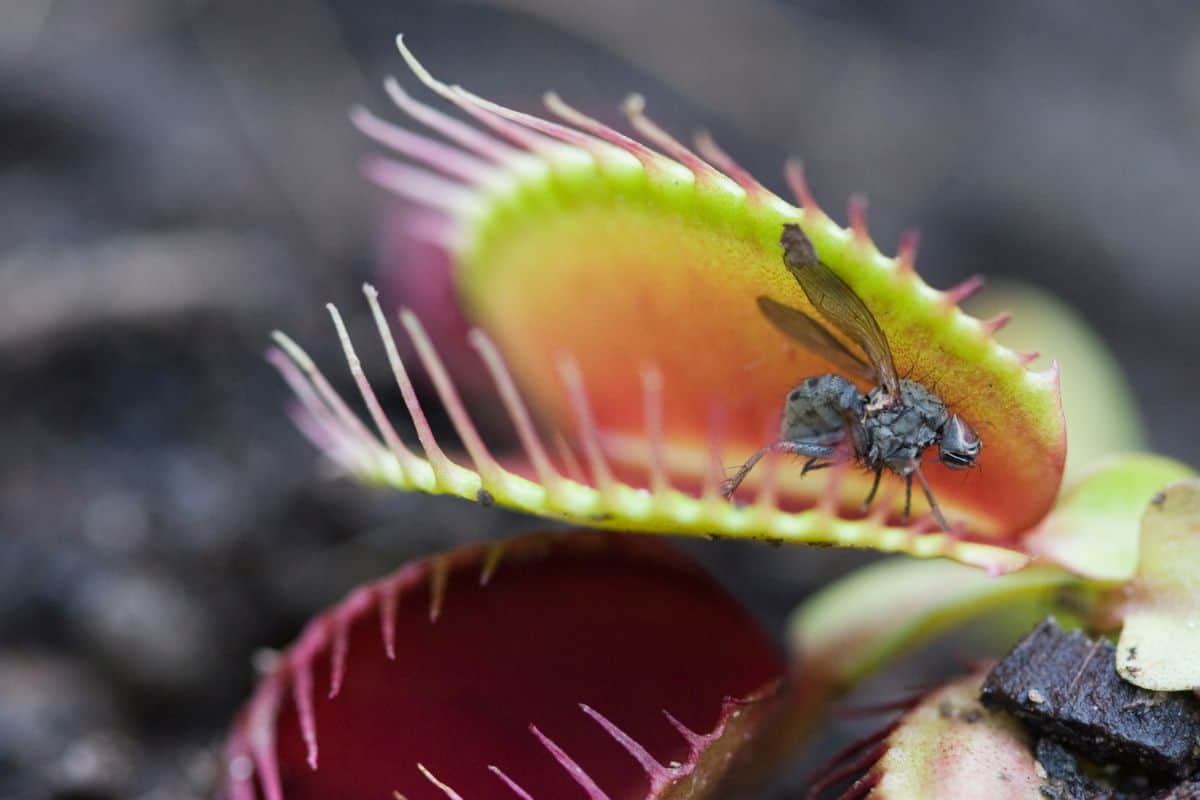 Now that you know the basics, it's time to feed your venus flytrap. Typically, you want to release a fly or two near your plant every two weeks.

However, some experts recommend weekly feedings for faster-growing plants, so this will be different for everyone. Remember, the more nutrients a venus flytrap has, the better/quicker it will grow.

Although a venus flytrap can survive without food for extended periods, starving one isn't beneficial. Considering you want to see yours flower and grow bigger, it's not a good idea to skip a feeding.

On the other hand, if your flytrap is outside on the porch or even in-ground, you shouldn't need to feed it at all. This carnivorous species is pretty self-sustaining outdoors, so many prefer to keep theirs out of the house.

You can also move a venus flytrap outside during summer if you have colder winters, so you won't need to feed it during that period.

So, for less work, we recommend keeping your venus flytrap outdoors.

How Long Can A Venus Flytrap Live Without Food? 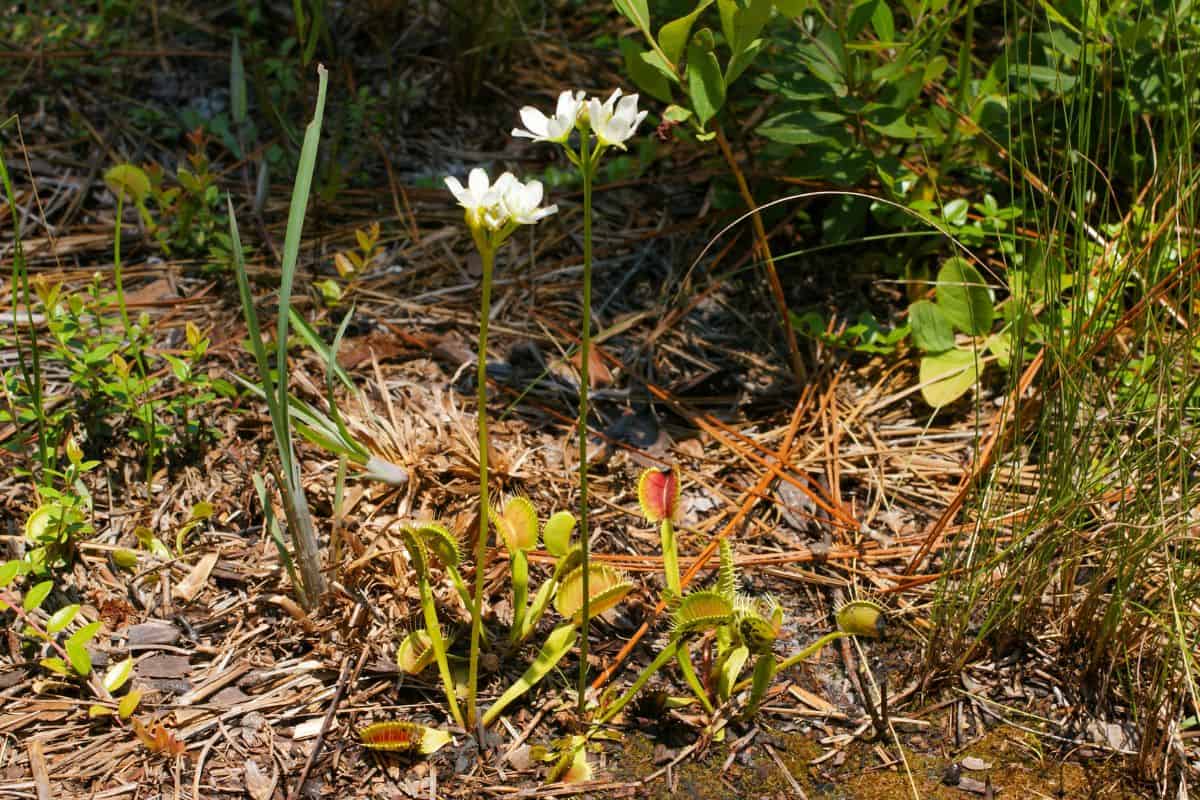 You can generally skip feeding a venus flytrap for a month or two at a time. Considering that even indoors, your plant will likely find a fly, this isn't likely to happen.

However, let's say your plant doesn't catch any prey, and you don't feed it. Although this may seem like a death sentence, your venus flytrap can go for long periods without eating anything.

As we mentioned above, this species relies heavily on photosynthesis. Therefore, as long as a venus flytrap has enough sunlight, it will be able to survive lengthy periods without flies.

With that said, we don't recommend starving your plant in its younger years, as this is a pivotal time for its development and growth.

Without enough food, your venus flytrap won't get bigger and may not flower.

What Happens If A Venus Flytrap Bites You?

Suppose you place your finger into one of your plant's traps. Generally, you will see the trap close quickly on your finger, although this won't harm you.

Especially if your plant is hungry, touching one of its carnivorous traps can result in a bite from your houseplant. Although this sounds scary, a venus flytrap has more eyelash-feeling teeth than spikes or prickles.

A common misconception about venus flytraps is that they have cactus-like teeth which clamp shut on their prey. This is untrue.

So, if your plant bites you, it's more likely to feel like a tickle rather than anything painful or serious.

How Much Water Does A Venus Flytrap Need?

One of the benefits of growing a venus flytrap is that it doesn't require much water. Usually, you only need to water a venus flytrap every ten to 14 days, so this won't be too often.

Most times, the soil around your flytrap should become somewhat dry before you add more water. However, you don't want to create drought-like conditions for your plant, so try and find a happy medium.

Using a moisture meter in the soil is also a good idea to ensure you don't overwater a venus flytrap. As you can guess, these plants don't enjoy tons of moisture and can become susceptible to root rot.

So, every two weeks is a good starting point for a watering schedule. 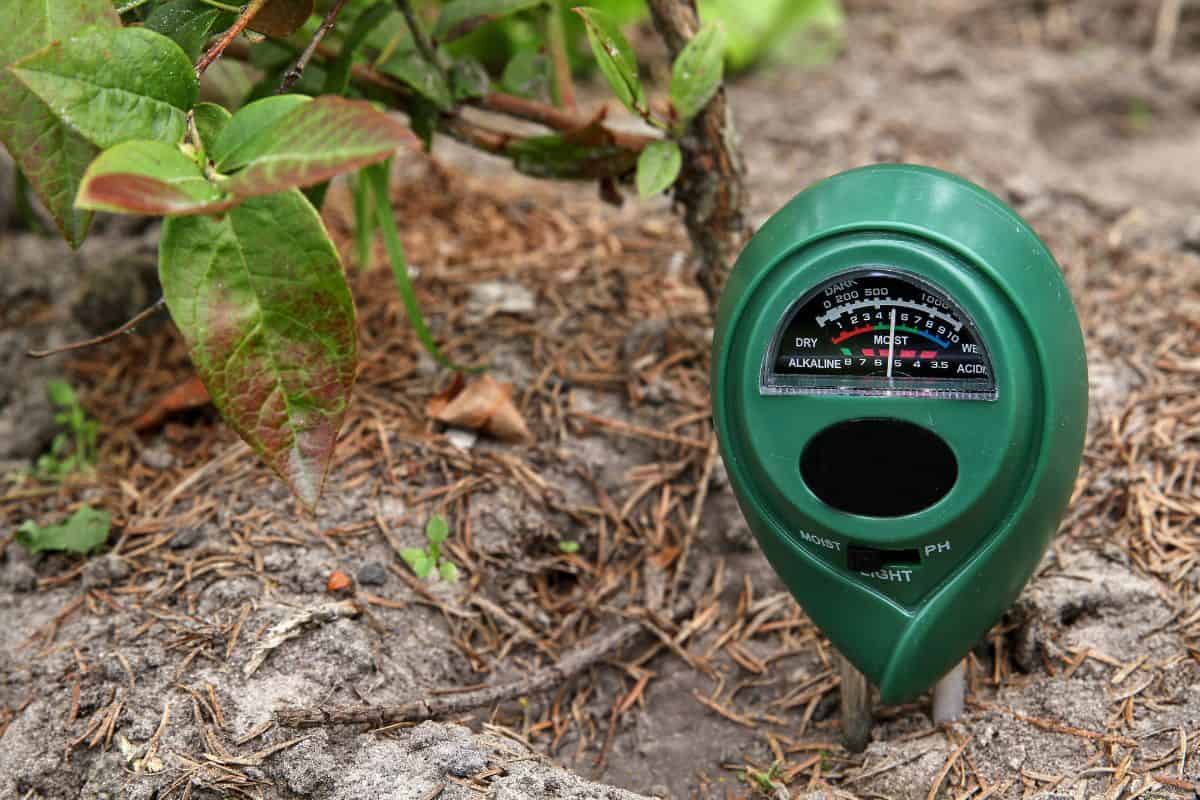 This meter reads the water levels in the soil, works inside and outdoors, promises a fast and accurate reading, has a 6.89-inch probe, and doesn't require batteries.

View this moisture meter on Amazon.

What Happens If I Overwater My Venus Flytrap?

If you overwater a venus flytrap, the best thing to do is let it drain for a few days. Surprisingly, this species can tolerate sitting in water for a couple of days without issues, although you want to try and avoid this.

As we said, venus flytraps do best when you water them, let the soil dry, and repeat. However, if your plant becomes saturated, it's not going to die.

You want to place your flytrap in a sunny spot and let the water evaporate or seep into the ground. From there, you can cut back on your watering frequency, as letting this happen too much will cause long-term damage.

Many experts warn against overwatering and underwatering a venus flytrap. Doing these things can damage your plant's roots, leading to premature death.

You may also notice stunted growth if you regularly over/underwater a venus flytrap, which can become a serious problem with repeated instances.

Is It Worth It To Grow A Venus Flytrap?

Furthermore, these plants live upwards of 20 years and produce flowers after 3-4, which is great for long-term gardeners.

Whether you have a venus flytrap or want one, it's always good to understand a plant. From what we found, venus flytraps will grow to be 5-6 diameters, often with 1.5-inch traps.

It's also worth noting that venus flytraps can live between ten and 20 years, which is impressive. On top of that, these plants don't require much attention or feeding, but they need to get enough sunlight.

How Much Does A Venus Flytrap Cost, And Where Can I Buy One?

Best Indoor Compost For Plants [And How To Apply]