There's rarely a yard so beautiful as one that celebrates hostas. Even so, you may find yourself looking for hosta alternatives that thrive in full sunlight. You're in luck because we did the research to bring you some suggestions.

Five of the best hosta alternatives for full sun include:

Just because these plants make excellent full sun hosta alternatives doesn't mean that you can treat them like hostas, though. Instead, you need to understand the care that each of these plants requires before you integrate them into your landscaping. Fortunately, you can work with local landscapers—and the information provided here—to determine how best to craft your yard to these plants' needs. 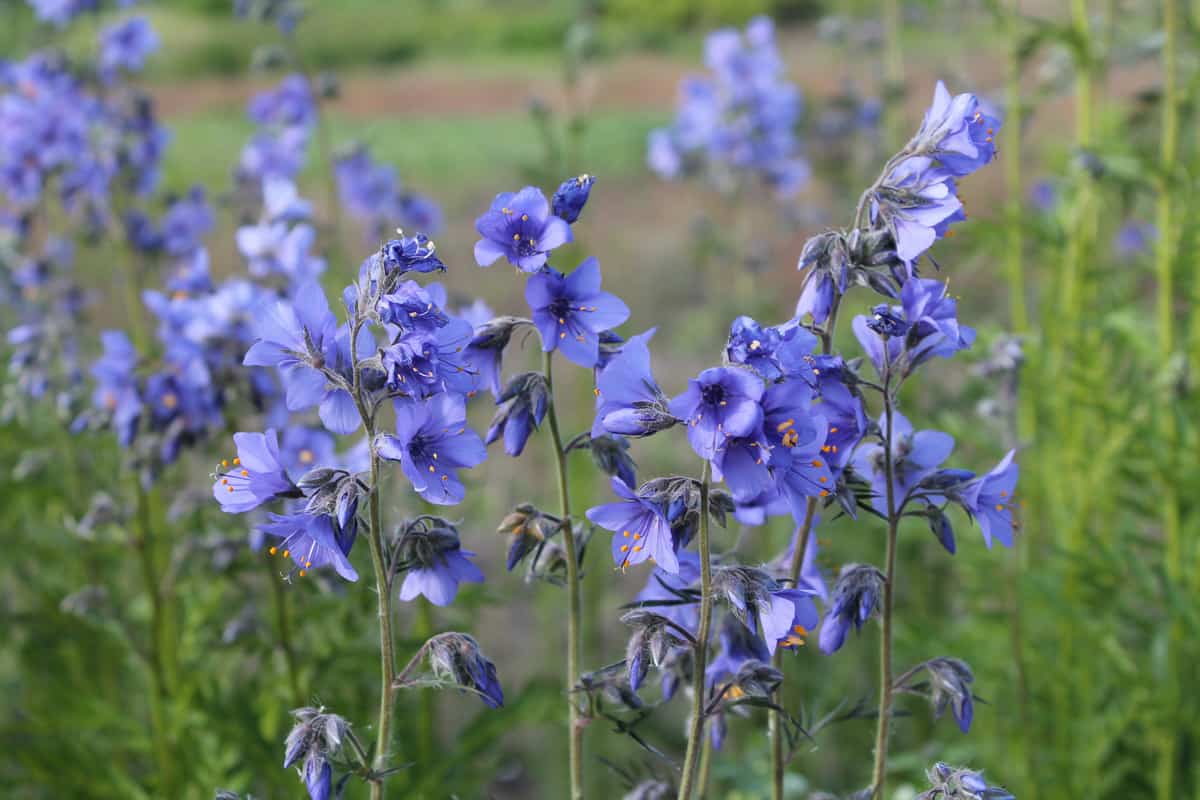 There are a few reasons you may want to replace the hostas you have flourishing in your yard. While these plants are easy to foster and can thrive in just about any environment, they are deer magnets. If you're noticing that you're losing the bulk of your landscaping to hungry neighbors, it may be time to swap your hostas for a deer-resistant strain of plant.

Read more: How To Get Rid Of Hostas From Your Yard?

Similarly, hostas aren't the native plant lover's best friends. These plants are considered invasive plants by some. A hosta's root system can become so vast that it chokes the life out of many of the other plants around it.

To get ahead of a hosta's invasive nature (and your local deer population) without compromising the beauty of your yard, you can instead consider planting:

Referred to as Trillium chloropetalum, giant trillium produces large green leaves and crimson blooms. Giant trillium tends to thrive in Zones 6 to 9 and can serve as decorative scrub alongside other statement plants.

While giant trillium, like hostas, does enjoy a bit of shade, it can flourish in the sun with the proper care.

If you integrate giant trillium into your landscaping, you should prepare to contend with its size. Giant trillium can grow to be up to two feet in height, and they tend to sprawl. The leaves of the giant trillium tend to stop growing once they've reached eight inches in length.

That said, giant trillium tends to retreat in on itself as the weather starts to cool. If you want to enjoy consistent greenery throughout your yard, you can pair a giant trillium with plants that begin to flourish as the fall months set in. 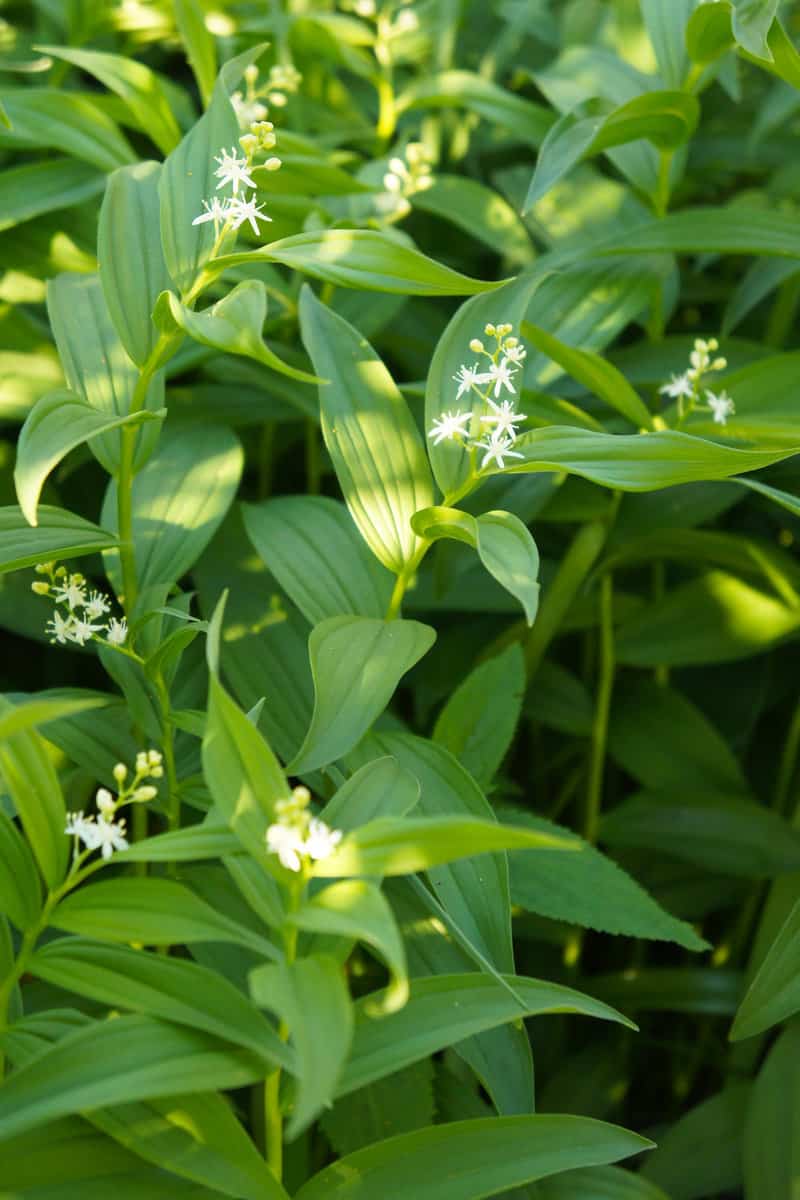 Specifically, starry Solomon's plume flourishes in the spring. It sprouts leaves in the shape of stars and peaks at between a foot and a foot and a half.

You can count on the starry Solomon's plume to sprout its beautiful white flowers in the spring, too, thus adding a pop of color to your yard. Later in the fall, these flowers will be replaced by berries that may be unsafe to eat but that are beautiful to look at.

Starry Solomon's plume is considered a robust plant. It can withstand droughts and will not attract deer to your yard. The plant does, however, grow rather thickly.

While it does not constitute ground cover, you'll want to ensure that any plants you plant alongside your plume can stand up to the plume's tendency to spread.

Homeowners living between Zones 3 and 8 will have the best luck planting starry Solomon's plume among their landscaping. 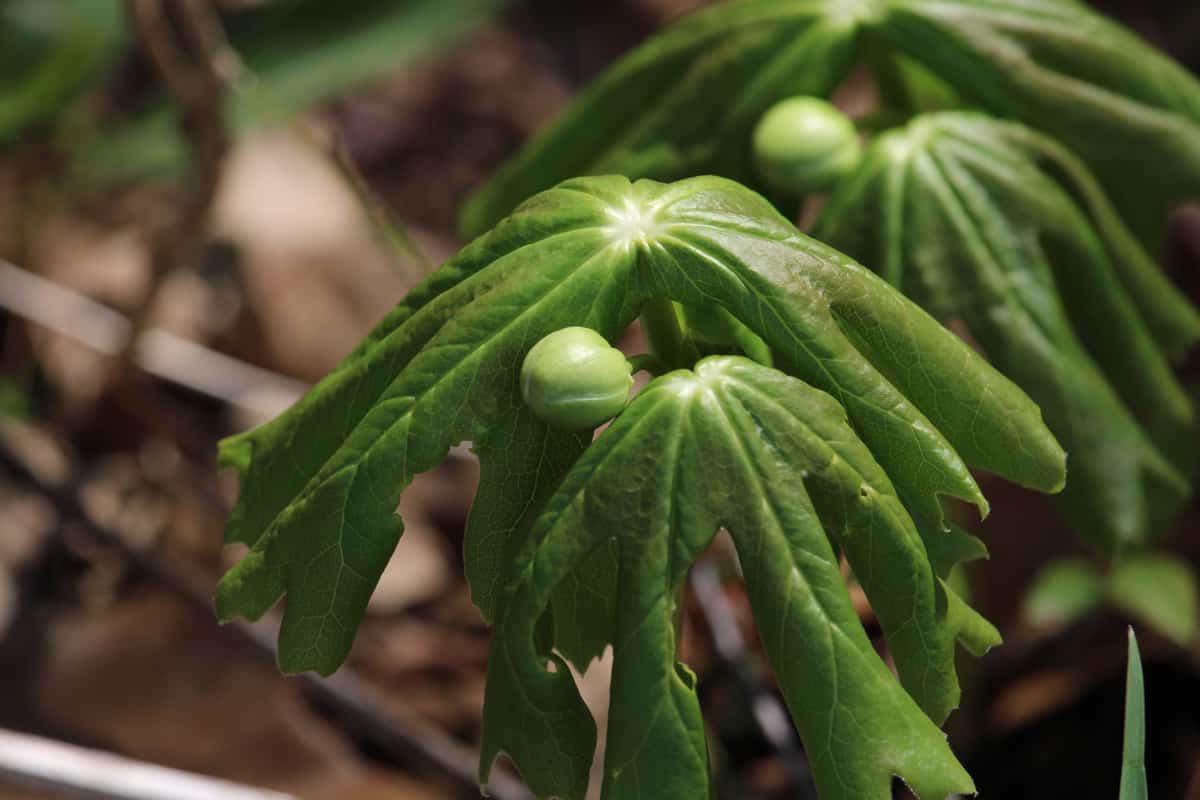 Like starry Solomon's plume, mayapple, or podophyllum pelatum, thrives between Zones 3 and 8. This plant tends to grow in patches, though its height is capped at between one and two feet. The width of the plant can grow to match its height, making it a predictable grower.

Also like starry Solomon's plume, mayapple finds its stride somewhere between ground cover and leafy greens. The almost sassafras-like leaves tend to grow in thick, making it difficult for shorter plants to compete with the mayapple's growth.

That said, the purple flowers that appear on the plant during the spring can more than make up for the pops of color that other foliage may be expected to substitute.

Mayapples do tend to attract pollinators in the spring. If you miss consistent butterfly or bee visits throughout your yard, you can count on the mayapple to draw them back. Similarly, when the plant fruits in the fall, you can expect to see all manner of critters eating from the plant.

With that in mind, mayapple plants are not as deer or animal resistant as some landowners prefer them to be. Even so, the plant's tolerance for sunlight and ability to grow in peace alongside larger landscaping features make it a welcomed hosta alternative. 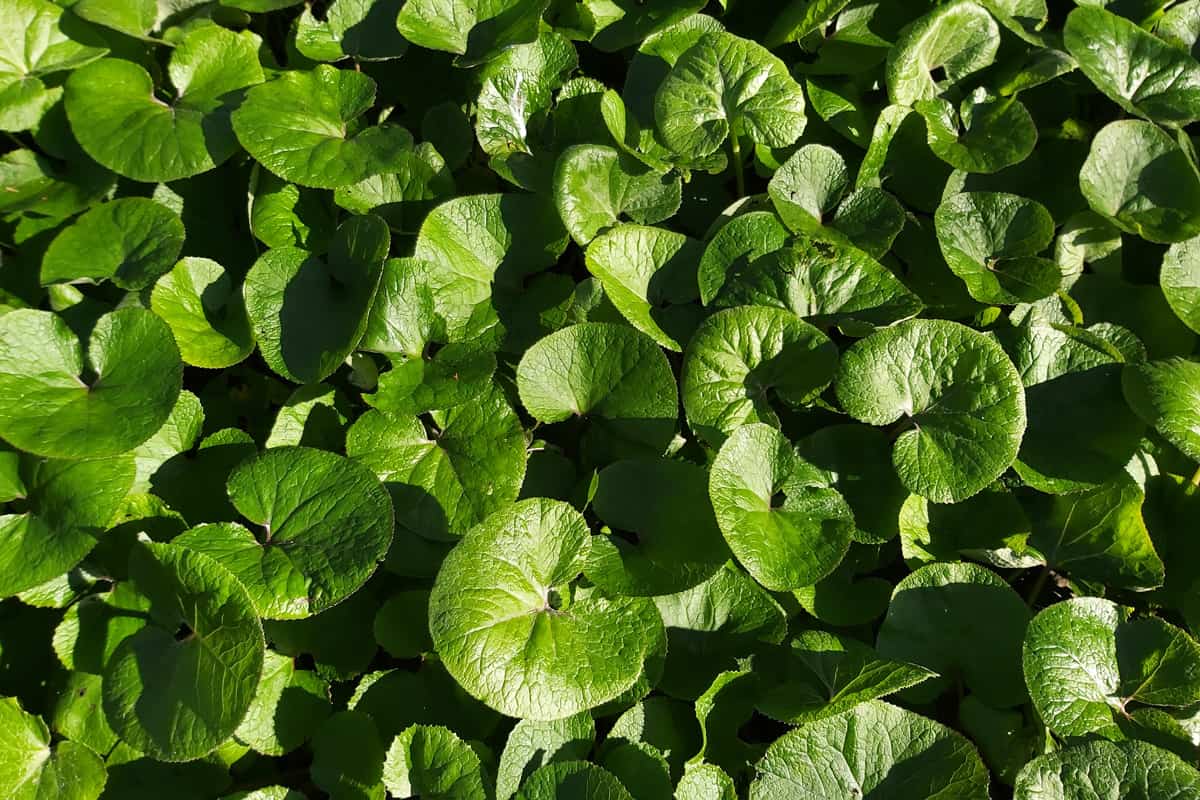 Wild ginger, or asarum canadense, is one of the smaller hosta alternatives to appear on this list. Unlike its larger cousins, the leaves of a wild ginger plant only grow to be a few inches long. That said, wild ginger makes for fantastic ground cover that flourishes in both sun and shade.

You can find wild ginger growing fruitfully between Zones 4 and 8. If you allow wild ginger to grow unchecked, the plant can cap off at a foot tall.

It's the spread of the plant that you have to stay on top of if you want to control the look of your landscaping. Wild ginger can form colonies and grow to cover a substantial amount of land in a short period of time.

Just because "wild ginger" sounds like an ingredient you might find in your kitchen doesn't mean that it's the same ginger you'd use in traditional Asian dishes. In fact, wild ginger as a hosta alternative is usually decorative.

That said, the plant is safe for humans to consume, usually as some manner of cooked sweet. If you want to invest in dual-purpose landscaping, asarum canadense may be for you.

Last but not least, consider Jacob's ladder, or polemonium reptans, as a hosta alternative. Most often found in Zones 3 through 6, this plant thrives in a cooler climate but still loves a healthy dose of sun. Jacob's ladder is best loved for the purple flowers it produces in the spring.

The growth from Jacob's ladder plant tends to be dense and fern-like. The plants tend to cap at three feet in height but can grow up to two feet wide as a cluster.

One of this plant's best features, however, is its low-maintenance approach to life. You rarely need to do more than trim and water Jacob's ladder to keep it blooming. The plant is also resistant to deer and diseases, making it a beautiful addition to a landscaping newbie's lawn.

Should You Plant Hosta Alternatives In Your Yard?

Hostas alternatives make a beautiful addition to any lot they're placed in. What's the need, though, to invest in hosta alternatives when you have access to traditional hostas?

As it turns out, there are a few benefits to exploring your hostas alternatives, whether you're building out pre-existing landscaping or creating something new. 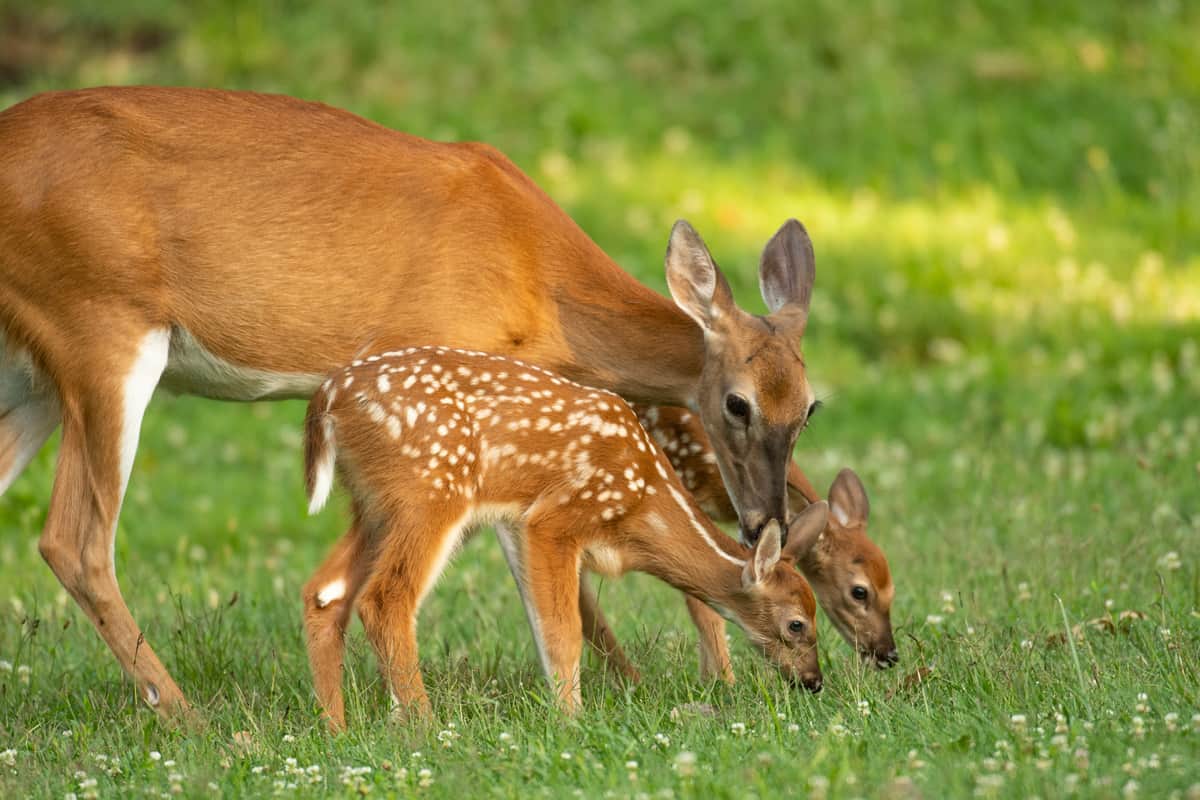 Hostas tend to attract deer to your yard. While this in itself is not a bad thing, these unwanted visitors can eat through your landscaping in little to no time at all.

Unprotected hostas can subsequently result in the loss of not only their own beds but also those beds of other plants. In a short while, you may find that all of the work and money you put into landscaping turned out to be for naught.

There are anti-deer measures that you can invest in, of course, to keep the deer out of your hostas. Bright lights and tall fences can both protect your landscaping in the long term.

However, these features may draw visitors' eyes away from the beauty of your yard. If you find that they decrease your enjoyment of your hostas, it might be in your best interest to invest in a landscaping alternative.

Click here to see this deer repellant on Amazon.

Hostas And Their Rapid Growth

There's nothing wrong with a plant that thrives in any condition. Hostas, however, threaten to do more than thrive.

A flourishing hosta can choke the life out of other plants you may have in your yard. Their extensive root systems put a significant demand on your lawn's natural resources and can subsequently make it difficult, if not impossible, for other plants to grow.

Investing in a hosta alternative allows you to enjoy a hosta's trademark features without compromising the rest of your landscaping.

Do Traditional Hostas Thrive In The Sun?

Hostas usually prefer to spend their days in semi-shaded parts of your lawn. However, there are several types of hostas that thrive in the sunlight. If you want to keep traditional hostas alongside their native alternatives, you can plant the following in full sunlight:

You can work with representatives at your local nursery to determine how well these hostas will grow based on your zone and soil type.

Hostas are well loved throughout the United States. When it comes time to contend with an unwanted deer problem or an unusual die-off in your yard, you'll want to explore alternative plants.

The good news is that there are several hosta look-alikes that not only drive off the deer but thrive in the sun. You can work with local professionals to determine which of these plants is available in your area and compatible with your lawn.