Honeysuckles are commonly grown as garden plants due to their thick climbing foliage and attractive flowers. There are, however, specific conditions that have to be met in order for them to develop fully. We have researched every aspect you need to know about honeysuckles and how to revive them.

The principal reasons honeysuckles are dying are lack of water, poor soil nutrients, insufficient sunlight, and plant disease. You can remedy this by keeping the soil moist, applying fertilizers, planting in well-lit areas, and removing the infected foliage.

If you own and cultivate honeysuckles, this article aims to provide essential information on how to maintain and proliferate your plant as well as restore dying growths. 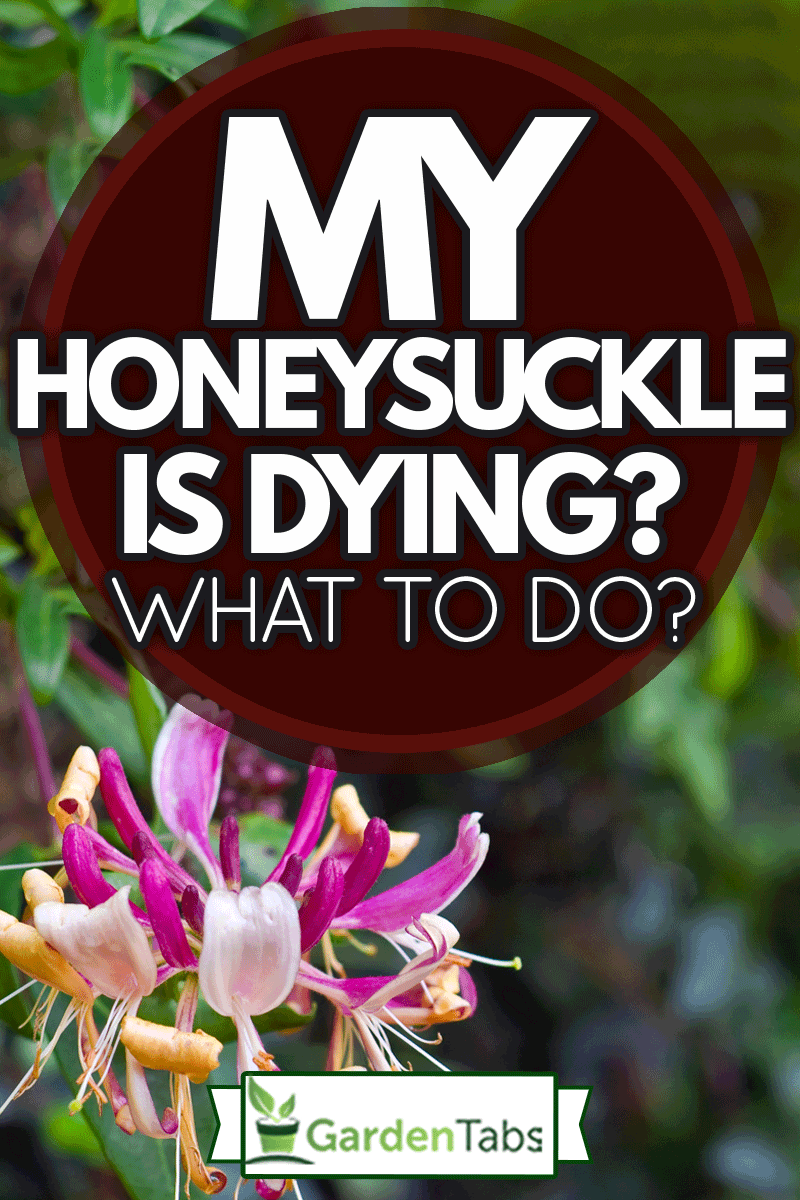 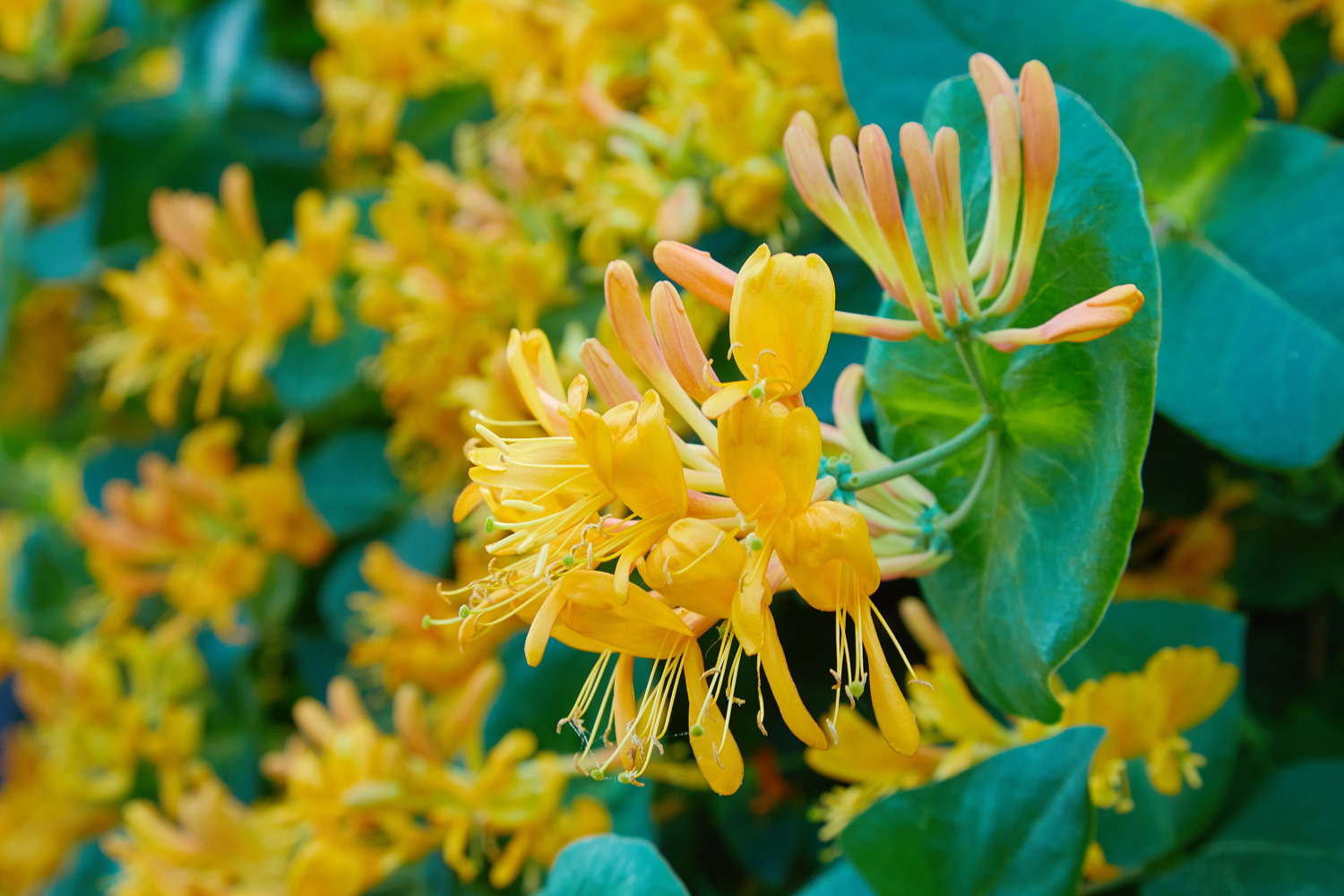 Honeysuckles, also referred to as Lonicera, are relatively easy to care for. They can grow in the form of ornamental shrubs or twining vines that are a native of and can be found in Asia, Europe, and North America. The majority of the varieties are located in China.

An understanding of the natural habitat of honeysuckles would enable you to provide the optimal conditions for their growth and sustainability. The plant is commonly found in woodlands which is synonymous with a forest except that it features an open canopy or less dense foliage which allows sunlight to penetrate.

During ancient times, people believed that placing flowers under the pillows invokes pleasant dreams. Although it is an old belief, flowers are still used today by manufacturers of herbal pillows.

Throughout winter, the leaves of some varieties are deciduous or they fall off when they reach maturity, while others retain their green foliage through more than one growing season.

Honeysuckles produce pairs of trumpet-shaped flowers that release a strong sweet scent, particularly during nighttime. Hummingbirds and butterflies are the two most common pollinators of this plant.

One distinct and fascinating characteristic of honeysuckles is that the color of the petals changes from white to yellow after pollination. Not only that, the leaves, nectar, and stem have been found to be edible to humans, however, the berries of most species can invoke nausea and vomiting when consumed.

My Honeysuckle Is Dying 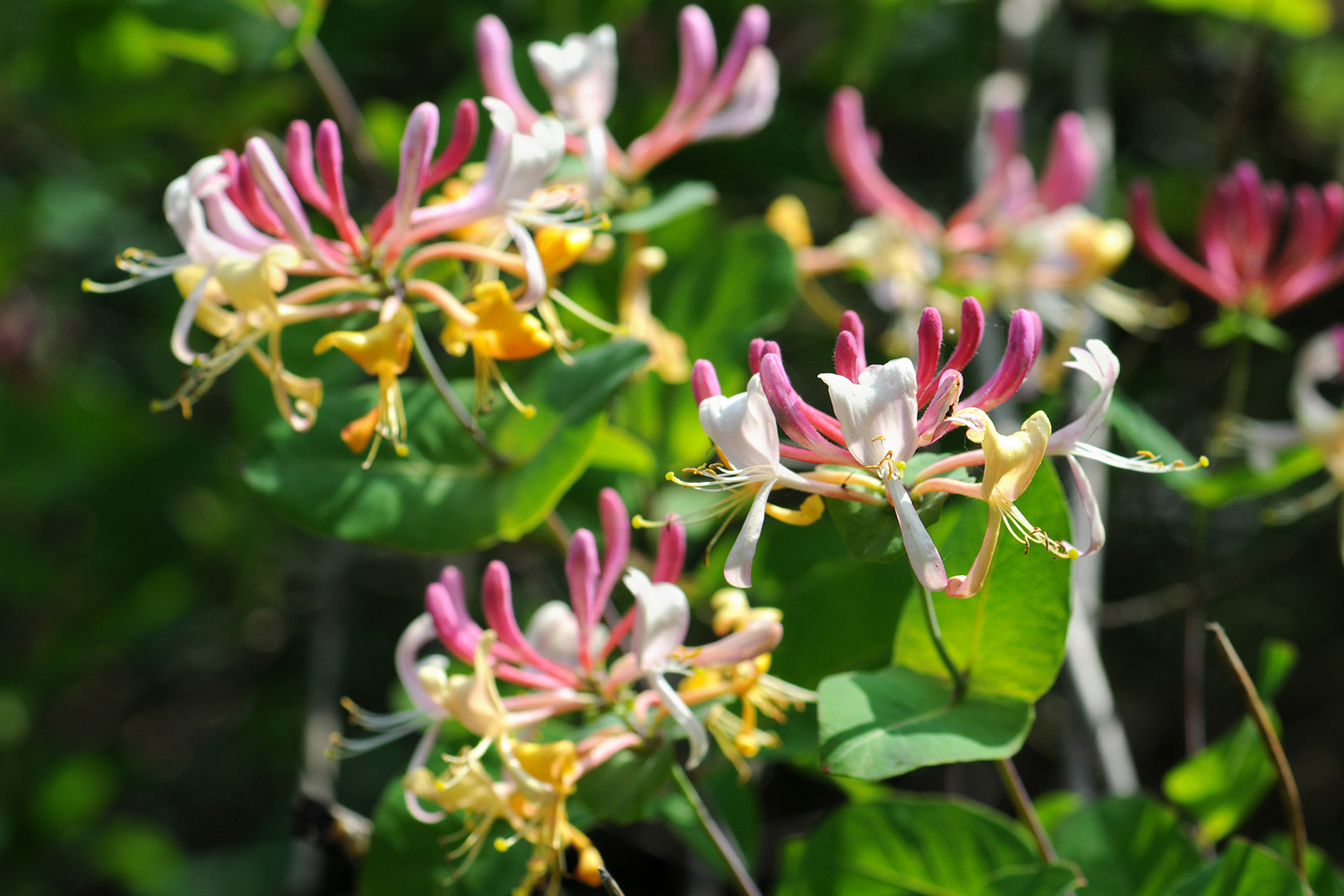 As mentioned, woodlands feature a natural layer of mulch which maintains moisture and generally keeps the underground environment damp. Decomposing leaves are porous and provide good drainage for excess water.

Planting honeysuckles in your garden may result in plant drought due to soil conditions, rapid evaporation, and the general climate.

If the ground is too sandy or rocky, water drains too quickly for the plant's roots to absorb enough moisture. Even with frequent watering, the leaves may turn yellow and fall off since they do not receive adequate hydration.

Excessive exposure to sunlight coupled with poor soil compositions will also result in dry conditions that are harmful to the plant.

Honeysuckles grow best in soil that has high organic matter content. Carbon and other elements are the byproduct of decomposing matter and are derived from substances that microorganisms synthesize.

In their natural habitat, the presence of fallen leaves and microbe activity provide honeysuckles with a continued source of nutrients. When planted in household gardens, the soil may become depleted over time and cause your plant to develop poorly. Yellowing of the leaves that eventually drop is a sign of inadequate nutrition.

Almost all flowering plants require adequate sunlight, including honeysuckles. It is necessary for the process of photosynthesis where plants utilize light to manufacture their own food to grow, bloom and reproduce.

When planted in the shade, honeysuckles tend to develop poorly and die. You may notice the vine growth to be oriented towards the source of light, long spaces between nodes, and sparse leaf development.

When the plant fails to produce buds and flowers, it needs to be cultivated and placed in a better-lit environment.

Lack of moisture, inadequate nutrients, and insufficient sunlight contribute to the deterioration of your plant's health which renders it susceptible to disease. The most common type of ailment that affect honeysuckles is a fungal disease called powdery mildew.

The plant develops gray and white mold with scattered black dots that spread to the leaves and then eventually fall off. If you detect the condition early, there is a good chance to revive the plant.

What To Do - Reviving Honeysuckle 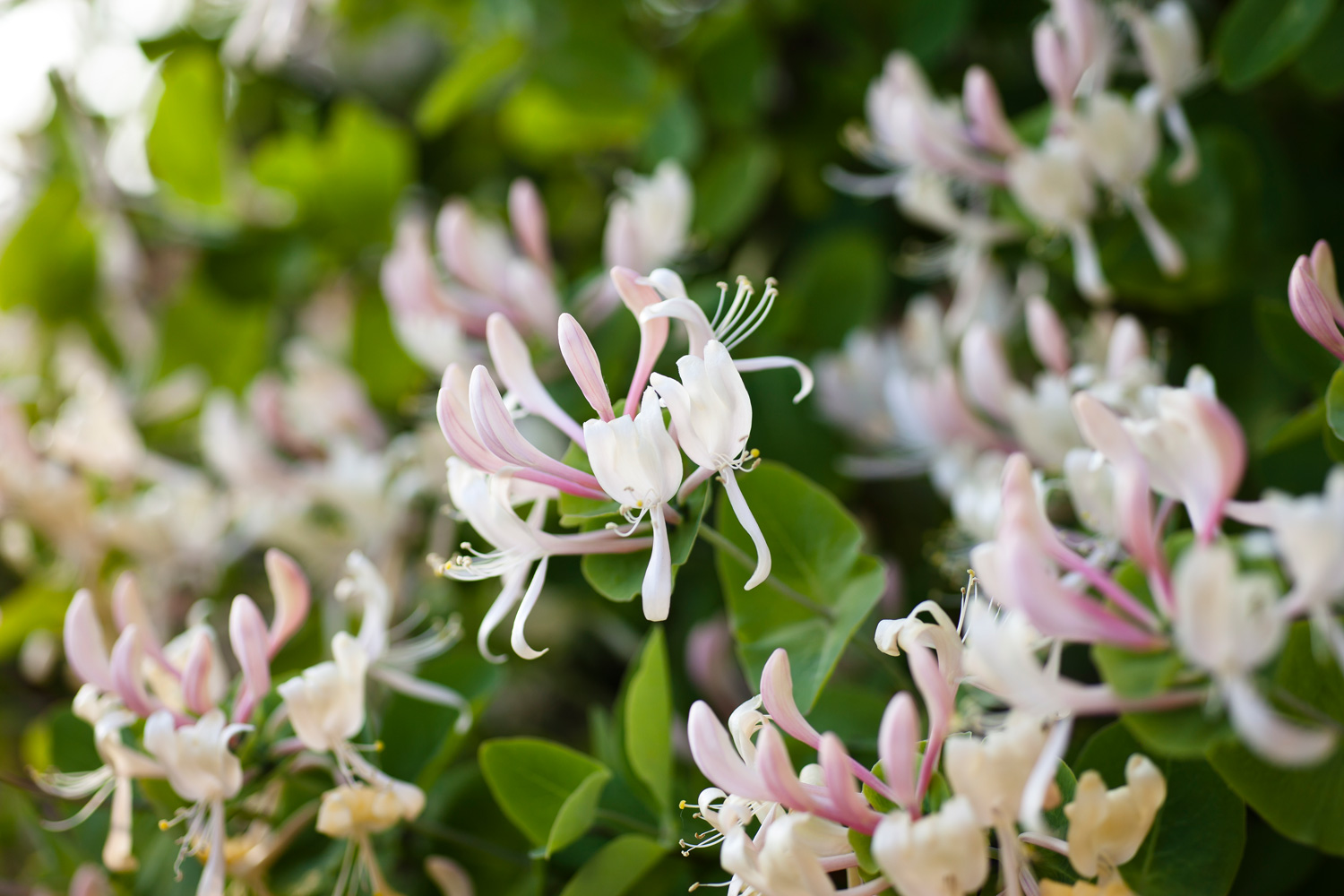 Honeysuckles thrive best on consistently moist soil and are sensitive even to temporary drought. Water your plant liberally at least once a week to promote root proliferation which in turn results in better development and flowering. You may increase the frequency during hot weather when water evaporates more rapidly.

Layer the base of your honeysuckle with mulch to retain the soil moisture, regulate the ground temperature, and prevent the growth of weeds. Before the material totally decomposes, add more dried leaves, tree bark or twigs, compost, and other mulching ingredients to maintain the moisture and availability of nutrients.

If honeysuckles are potted or have been planted in the same place for prolonged periods, they consume and eventually exhaust the soil nutrients. Apply a balanced fertilizer with equal nitrogen, phosphorus, and potassium content during the growth period and lessen the amount when the plant approaches maturity.

Choose fertilizers that release the nutrients slowly to prevent leaf and root burn. When the roots are exposed to high concentrations of plant additives they tend to suffer rather than benefit from the nutrients.

As much as possible, reproduce the conditions in which honeysuckles thrive and develop, that includes adequate sunlight exposure. The leaves of your plant benefit most from light since this is where photosynthesis takes place and determines the overall health of your honeysuckle.

The middle of the garden, an open trellis, and areas not shaded by structures are ideal to cultivate your plant. They grow poorly when potted and displayed indoors so replant your honeysuckles in gardens and plots that receive enough sunlight.

The appearance of gray or white mold with black dots on the leaves is a sign of powdery mildew. To prevent fungal spores from spreading, immediately trim or cut the infected leaves.

Wipe the blades in between each pruning using a cloth soaked with disinfectant. Afterward, throw or burn the infected foliage to avoid contaminating the rest of the plant.

What Are Honeysuckle Good For? 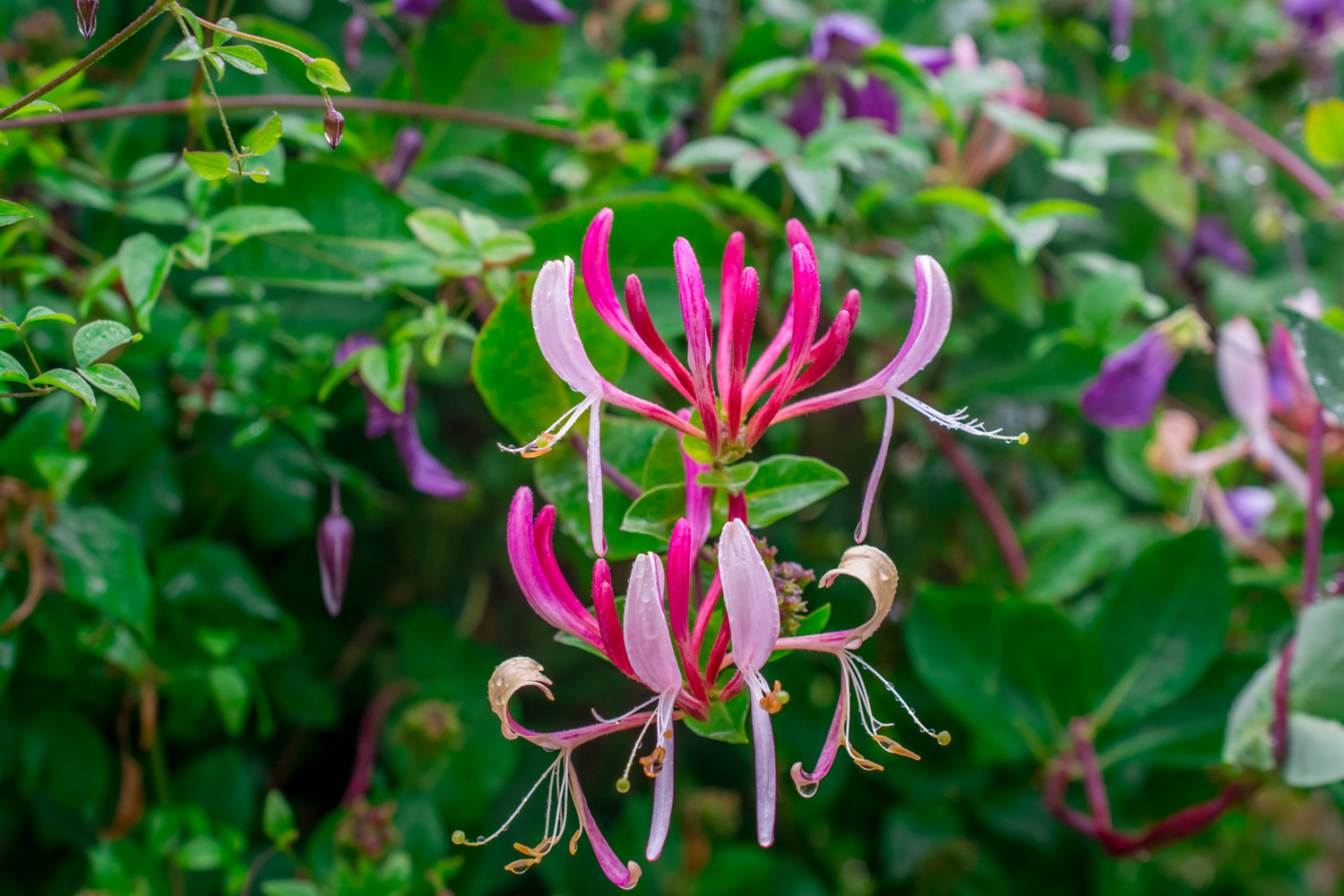 Honeysuckles have been known to have at least 175 known species. Lonicera japonica (Japanese Honeysuckle) and Lonicera periclymenum (Common Honeysuckle) are among the popular varieties because they have medicinal attributes.

The following are the nutritional contents and health benefits of the berries produced by Lonicera caerulea.

Phytochemicals are chemical compounds or nutrients produced by plants that act as their defense mechanism against fungi, bacteria, and infections. It was proven that this element provides certain health benefits such as anti-inflammatory, anticancer, and antioxidant.

Polyphenol is a kind of phytochemical produced by plants. According to studies, long-term consumption of this nutrient protects your body against cardiovascular diseases, lung damage, osteoporosis, gastrointestinal disorders, diabetes mellitus, certain kinds of cancers, and dementia.

The fruits show an incredibly high amount of ascorbic acid (Vitamin C) which considerably soothes inflammation in the body, and helps boost your immune system.

Another organic composition present in blueberry honeysuckle is citric acid. It basically converts digested food into cellular energy. This means that more energy is delivered to different cells of the body - brain cells, muscle cells, liver cells, and so on.

The fruits generally contain less sugar than other kinds of berries, making it a safe and healthy diet for people with diabetes. The total glucose content of Lonicera caerulea is approximately 15 to 25.85 mg/g per fresh fruit as opposed to raspberry with 45.5 mg/g.

During a laboratory test, Lonicera Caerulea has been proven to have the highest antioxidant than strawberries and blueberries. Studies show that consuming high levels of antioxidant have a significant effect on resisting cancer tumors (lowers the risk of developing cancer) and other inflammatory diseases. 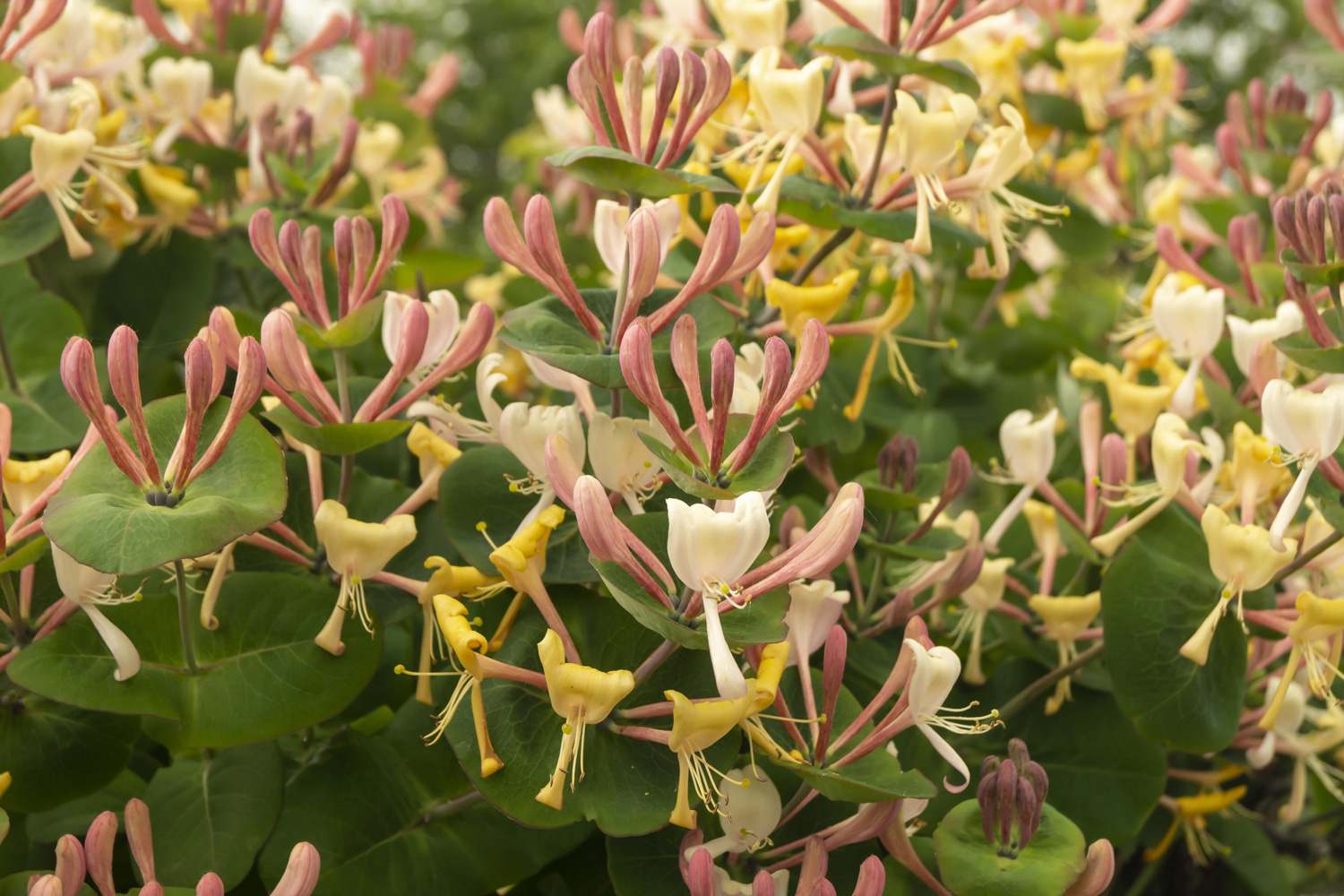 Honeysuckles considerably need moist and sufficient soil nutrients, and enough sun exposure to maintain plant health and prevent disease. These general conditions would allow your plant to develop fully and thrive. We hope the article provided enough information and know-how to enable you to enjoy your honeysuckle.