One of the most desired qualities in a new home is privacy. When most people settle into their houses, they want the ability to sit on their porches or throw backyard parties without neighbors watching them.

Trees can provide a great amount of privacy for people; they protect yards from wandering eyes, yet they offer a sense of peace and beauty that private fences don't offer.

In particular, holly trees are wonderful privacy screens because they have dense foliage that makes for a sturdy wall.

Now that you have a quick list of the 5 best holly trees for privacy, you may want to know more important information about these trees.

For example, what is the yearly growth rate of these trees, and how can you influence their growth? Don't worry, we elaborate on that information and more in this post!

Keep reading to learn more about the basic characteristics and growth rates of the 5 holly trees in this post, how far apart you should pant holly trees for the best privacy screens, when you should prune holly trees, and the lifespan of hollies. 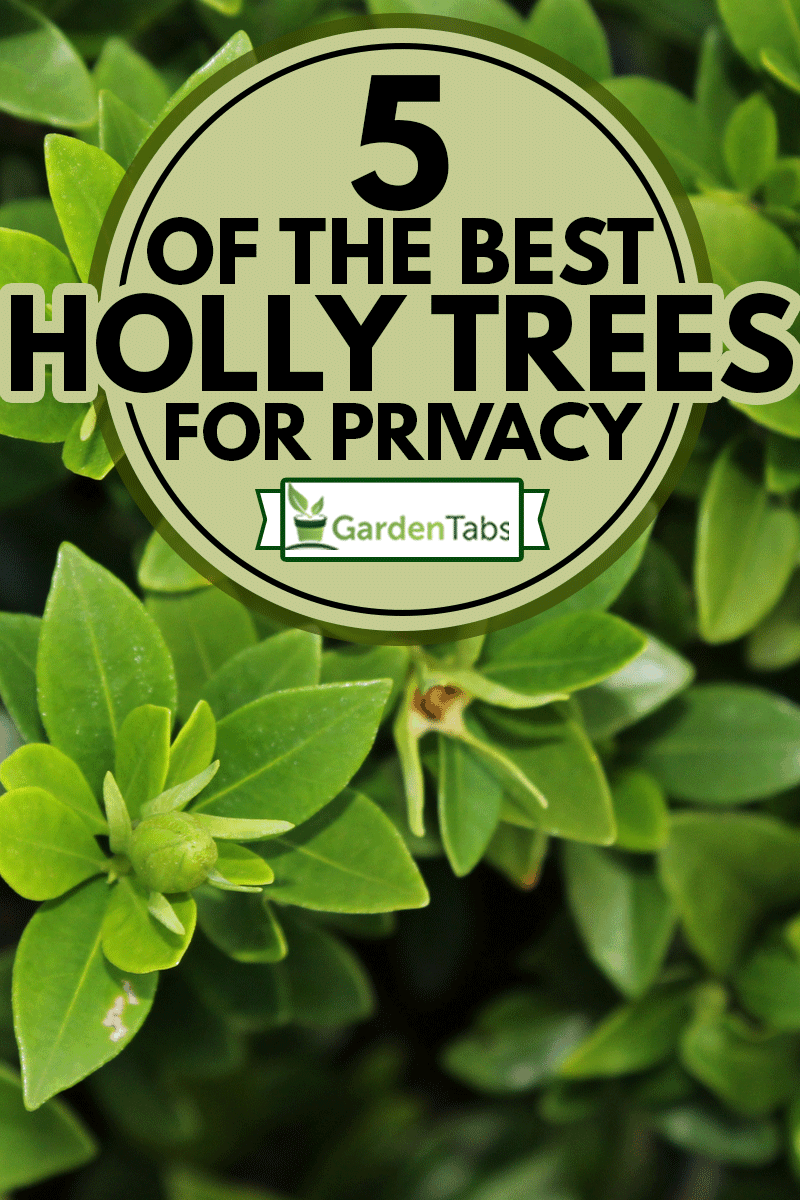 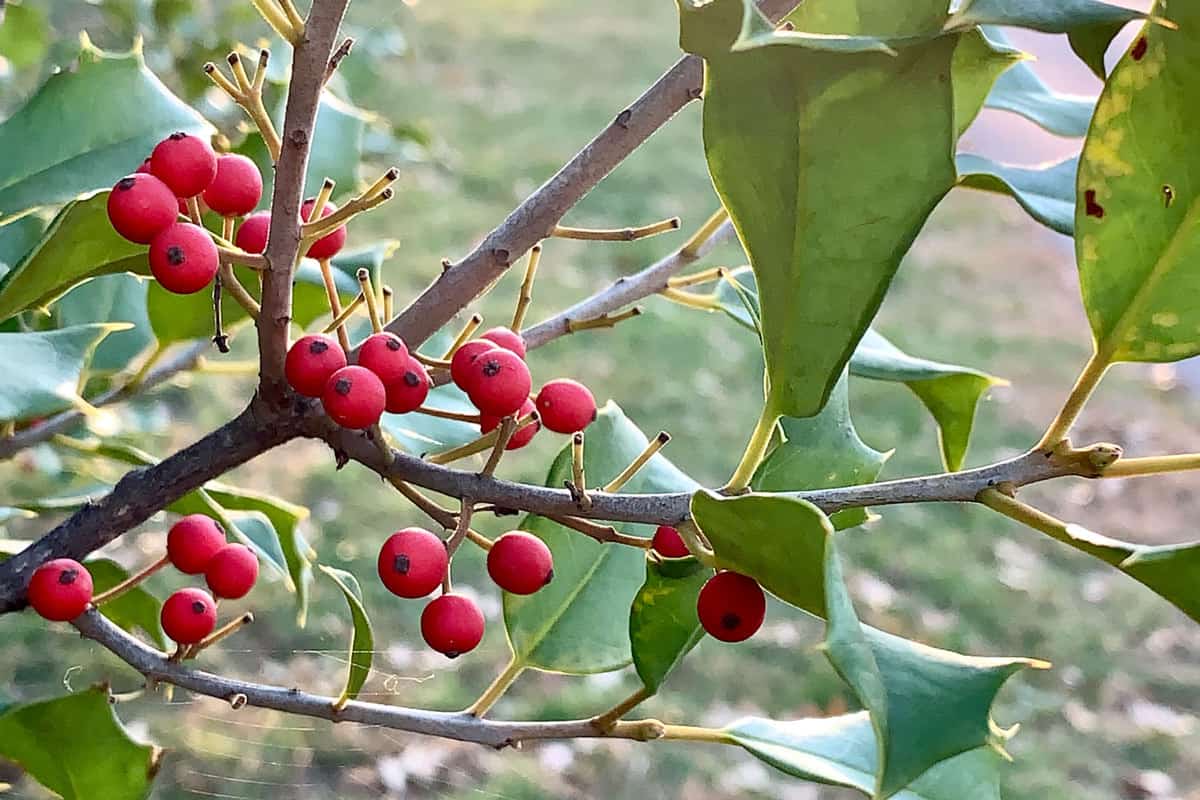 The American holly is native to the eastern and south-central United States. Its leaves have a leathery texture, have sharp tips, and remain green all year.

The American holly has a pyramidal shape, and when it cross pollinates with other trees, it produces red berries, which gives it even more beauty. In addition to red berries, this tree also produces green or cream-colored flowers.

The American holly has an annual growth rate of about 12 to 24 inches, meaning that it grows at a slow to medium pace.

One thing that you can do to influence the growth of the American Holly is to plant it in full sun or partial shade.

A great evergreen fertilizer for the American holly and other hollies is Espoma Organic Holly-tone Fertilizer.

The Dragon Lady holly has an annual growth rate of about 8 to 10 inches, meaning that it grows at a moderate pace.

As mentioned, Dragon Lady grows to about 10 to 20 feet at full maturity. This smaller size means that the privacy screen it provides is better for smaller yards.

As with the American holly, you can influence the growth of Dragon Lady by ensuring that it is given the proper amount of sun and the proper type of soil.

The Dragon Lady holly prefers full sun to partial shade, so if you provide this amount of sunlight, you will encourage the tree to grow. Also, Dragon Lady does well in most types of soil, except for soggy soil.

So, if you ensure that this tree is not planted in soggy soil, you can help it grow.

You can also use a well-rotted manure fertilizer or a broadleaf evergreen fertilizer to influence the growth of Dragon Lady. 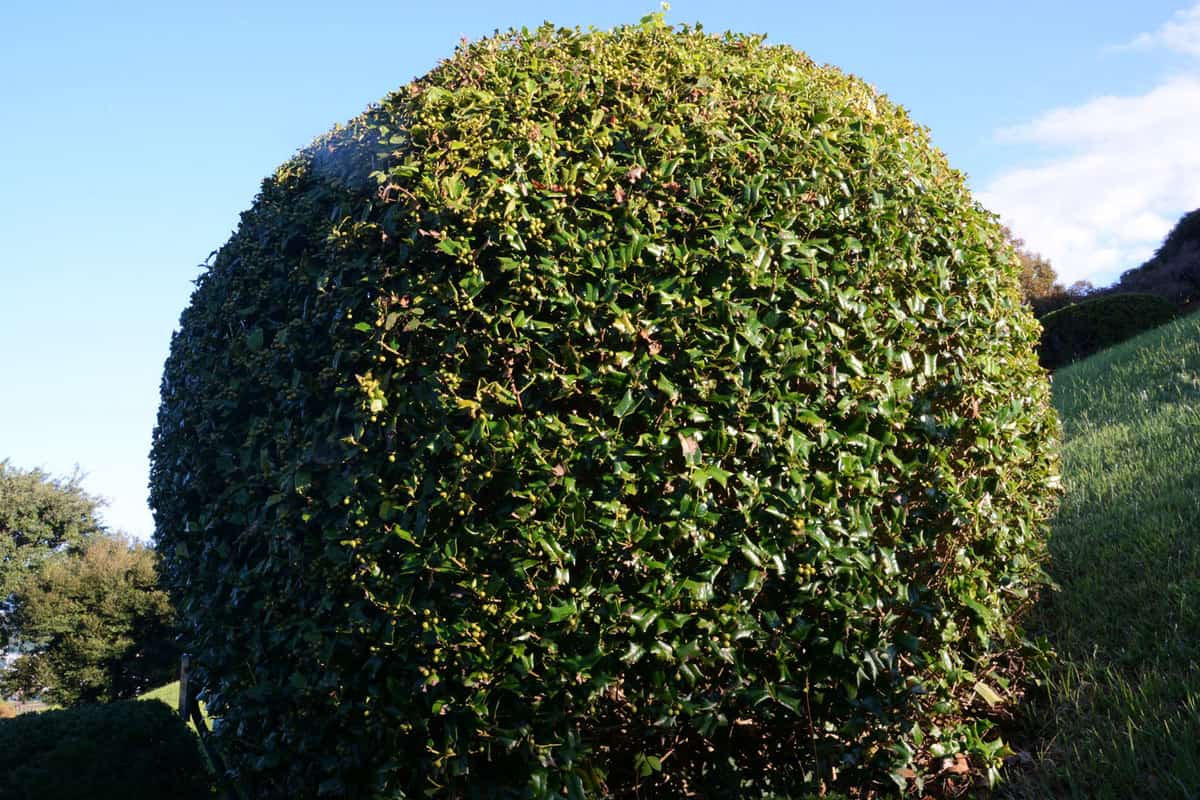 The Chinese holly is native to China, but it is found throughout the Southeastern United States due to its great heat endurance. These trees are bushy and dense. They have spiny, glossy leaves that stay green all year.

Unlike the American holly and the Dragon Lady holly, the Chinese holly is circular in shape.

However, like these other trees, Chinese holly does produce red berries; some types of Chinese holly even produce yellow-colored berries. The flowers that bloom from this tree are yellow or green in color.

The Chinese holly has a moderate annual growth rate. Because their foliage is bushy and dense, they make very effective privacy screens.

However, due to its bushiness, the Chinese holly can be messy and overwhelming. To keep a neat privacy screen, it's important to prune this tree.

To influence the growth of the Chinese holly, ensure that it gets full sun to partial shade, plant it in moist, well-drained soil, and apply well-rotted manure or broadleaf evergreen fertilizer to it. 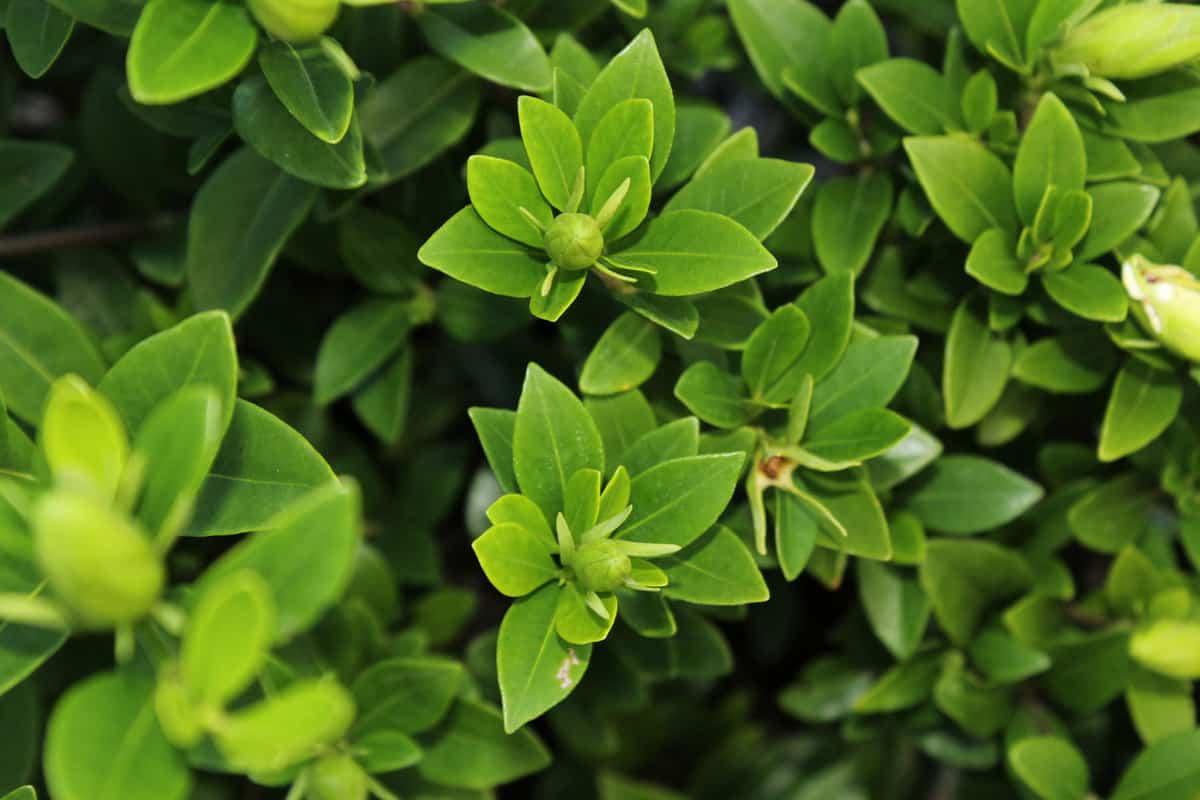 The Nellie R. Stevens holly is a hybrid of the Chinese holly and the English holly.

This holly tree is named after Nellie Stevens, a schoolmistress who took some berries from this particular tree when she visited the United States Botanical Garden.

The Nellie Stevens holly has glossy leaves that have one to three prickly spikes on them. These leaves stay green all year. The tree is pyramidal in shape and produces white flowers and red berries.

The Nellie Stevens Holly is one of the fastest growing holly trees there is. It grows at a rate of 3 feet per year.

To influence the growth of these beautiful, fast-growing holly trees, plant them in full sun to partial shade and in moist, well-drained soil. You can also use well-rotted manure or broadleaf evergreen fertilizer to encourage growth. 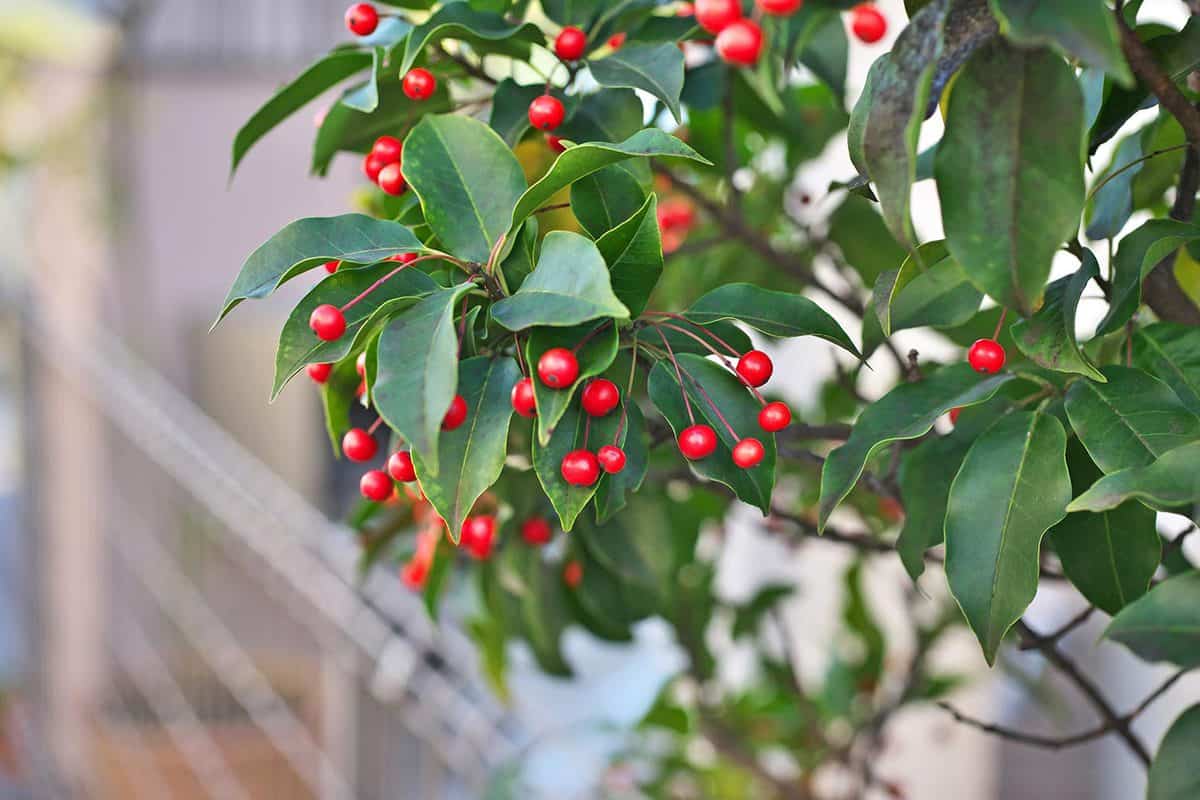 Like all of the other trees on this list, the Longstalk holly has glossy leaves that stay green all year. However, the leaves are not prickly, and during harsh winters, they can become damaged and take on a yellowish hue. The leaves are also fairly narrow.

The tree has a pyramidal shape, and it produces greenish-white flowers and red berries. The berries that the tree produces hang from long stalks, which is where this holly's name comes from.

The Longstalk Holly can reach 15 to 30 feet tall at full maturity. At times, its branches grow in random directions, but this can add to its ability to be a good privacy screen.

As with all of the other hollies on this list, if you want to influence the growth of the Longstalk holly, plant it in full sun to partial shade and in moist, well-drained soil. Well-rotted manure or broadleaf evergreen fertilizer will also influence its growth.

What is the Fastest Growing Holly? 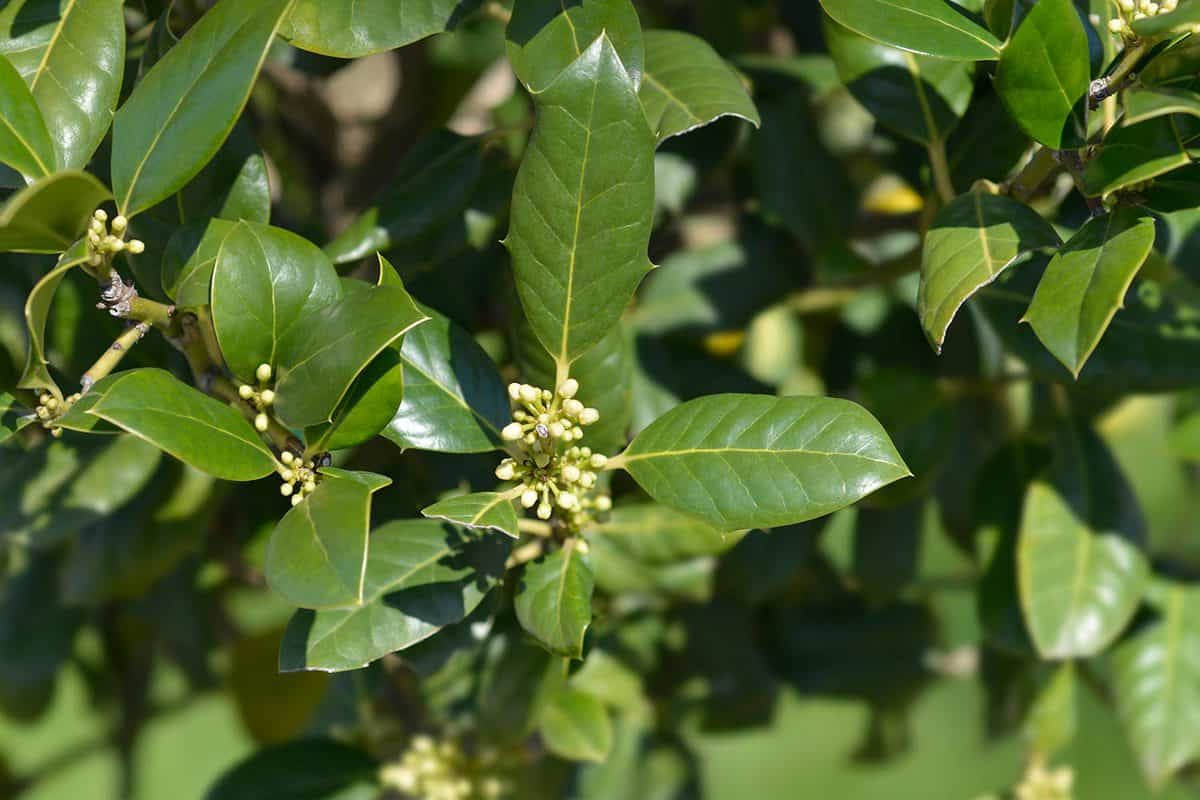 Compared to the American Holly and the Dragon Lady Holly, which both usually only grow a few inches each year, the Nellie Stevens holly grows very quickly.

How Far Apart Should You Plant Privacy Screen Hollies?

If you want to create a privacy screen with pyramidal evergreen trees like Dragon Lady holly, staggered double row planting is recommended.

Because the Dragon Lady holly has a width of about 10 feet, you can plant the trees in the first row about 18 feet apart.

This should give you a solid, effective privacy screen!

When Should Holly Trees be Pruned? 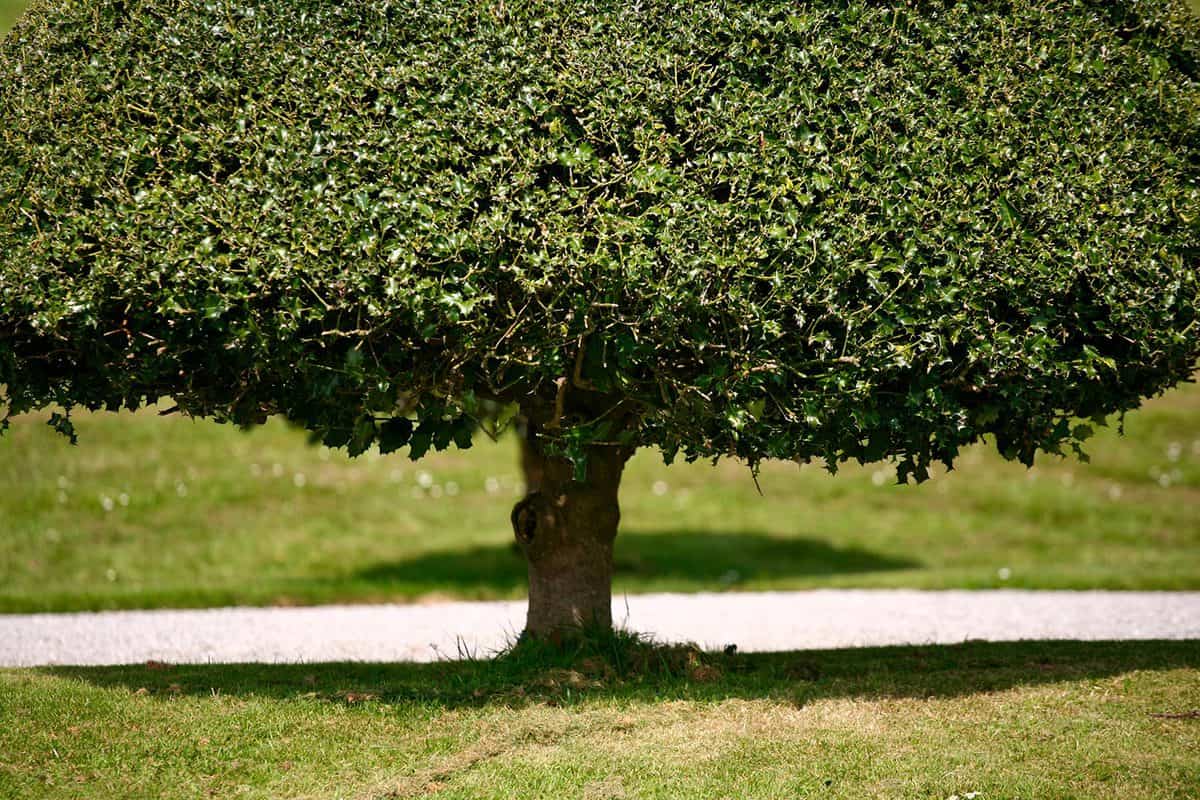 How Long Do Holly Trees Live? 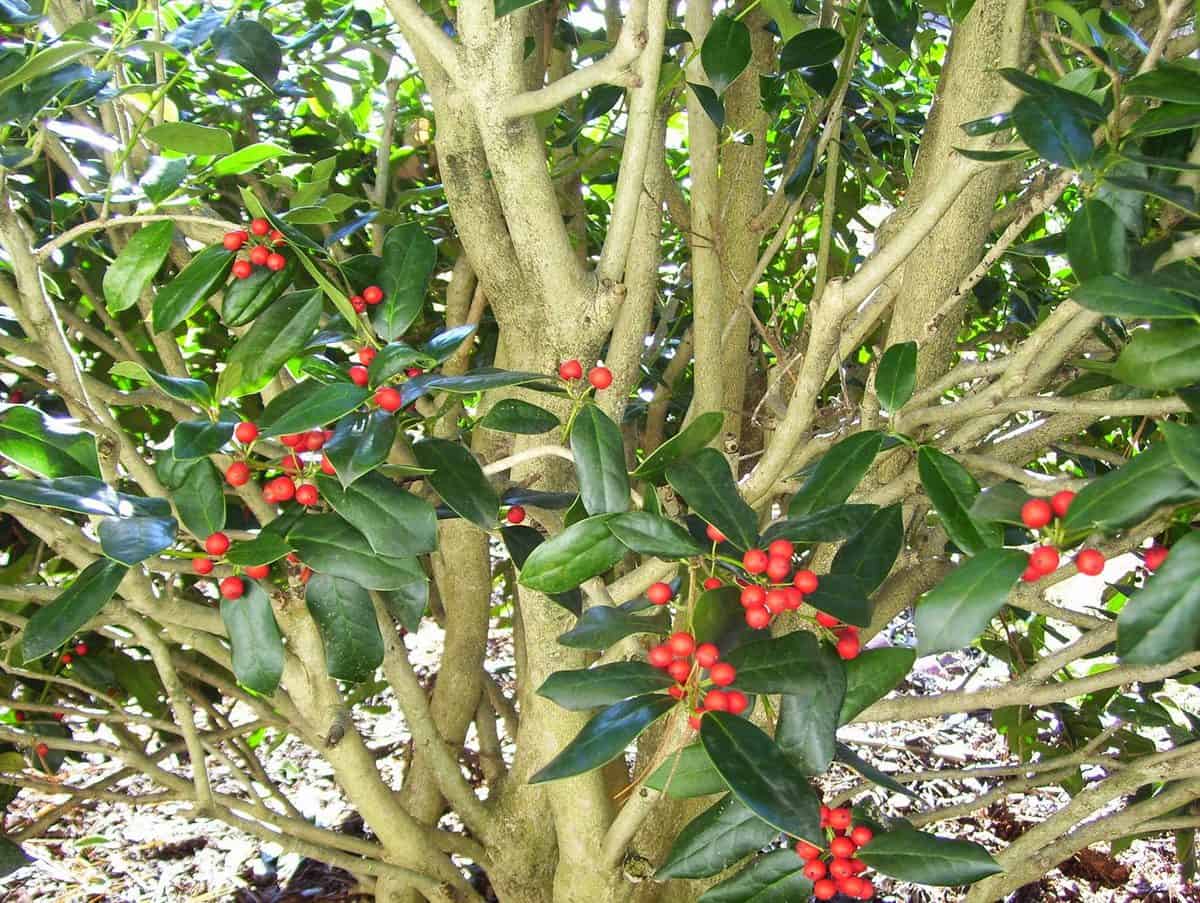 The lifespan of hollies depends on the holly species and how well the trees are taken care of. If you properly care for your holly trees, they can generally live 100 years or more.

Holly trees offer a lot of beauty and can make great privacy screens due to their dense leaves. Five of the best holly trees for privacy are the American holly, the Dragon Lady holly, the Chinese holly, the Nellie Stevens holly, and the Longstalk holly.

Before you go, check out some of our other articles:

How Long Does A Holly Tree Live?

How Much Water Does A Holly Tree Need?