Finding new ways to fill your garden can sometimes require you to get creative. Have you ever thought of purchasing frozen edamame from the store and growing the beans at home? Well, we've done some research and have the answer to this question. Let's check it out below!

Depending on the quality of your frozen edamame, you might be able to grow it. In general, you can wait for your beans to defrost, rinse them off, and plant them into a fresh potting mix.

Your edamame should take between 90 and 150 days from seed to a pod. Of course, this is an estimated timeframe, so you could see growth much sooner.

As we begin, we will cover all things edamame and explain how to grow one that's frozen. Whether you're trying to harvest your own veggies or want to take on a fun project with the family, we're here to offer some help. With that said, let's dive right into this topic! 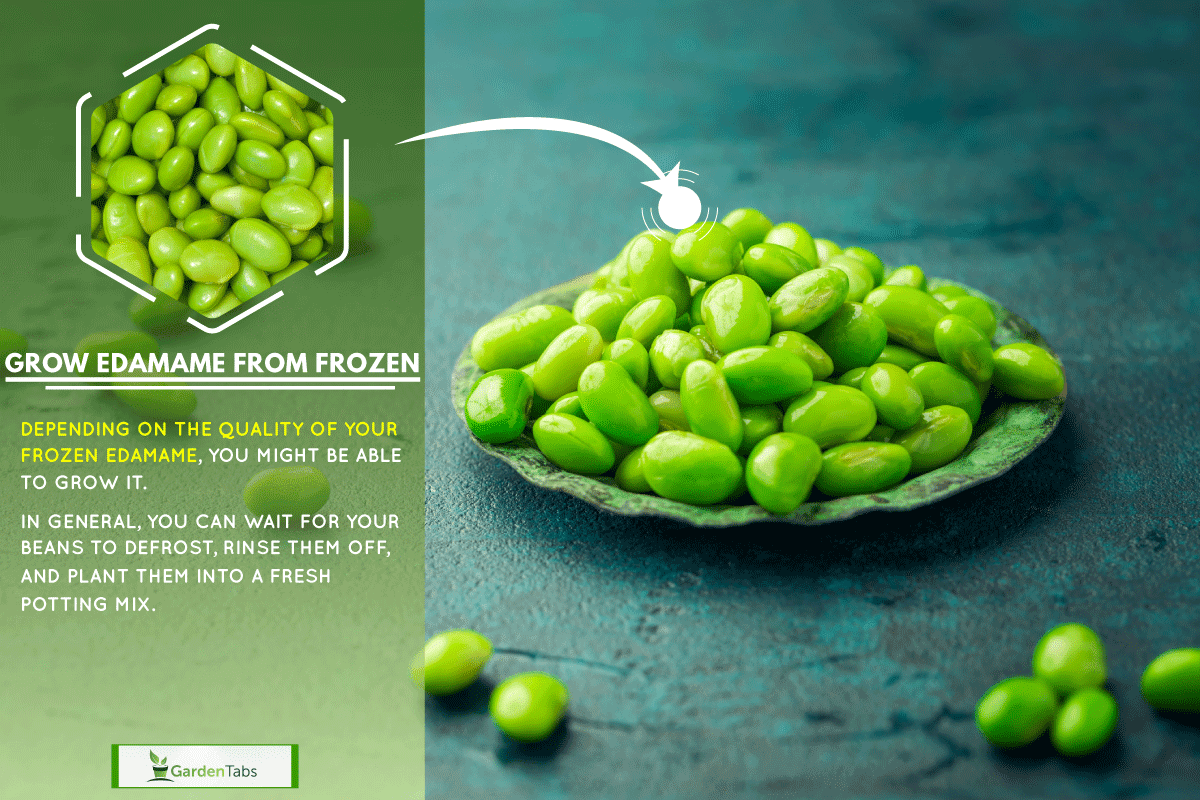 How Do You Grow Edamame That's Been Frozen?

For anyone wanting to grow edamame that's been frozen, you'll need to gather the right materials. First, you want to grab your frozen edamame and let it defrost.

Then, it's essential to rinse your beans before they go into your pot/the ground. There are endless options for edamame "growing kits," although you don't necessarily need one.

Ideal conditions for edamame include slightly acidic soil (a pH of around 6.0).

You also want to ensure your edamame grows with plenty of light. Even though your beans started out frozen, it doesn't mean they want to be cold.

Many experts recommend planting edamame seeds/beans 1 to 1 1/2 inches deep and 2 to 3 inches apart, so try to keep that in mind while you're doing this at home. 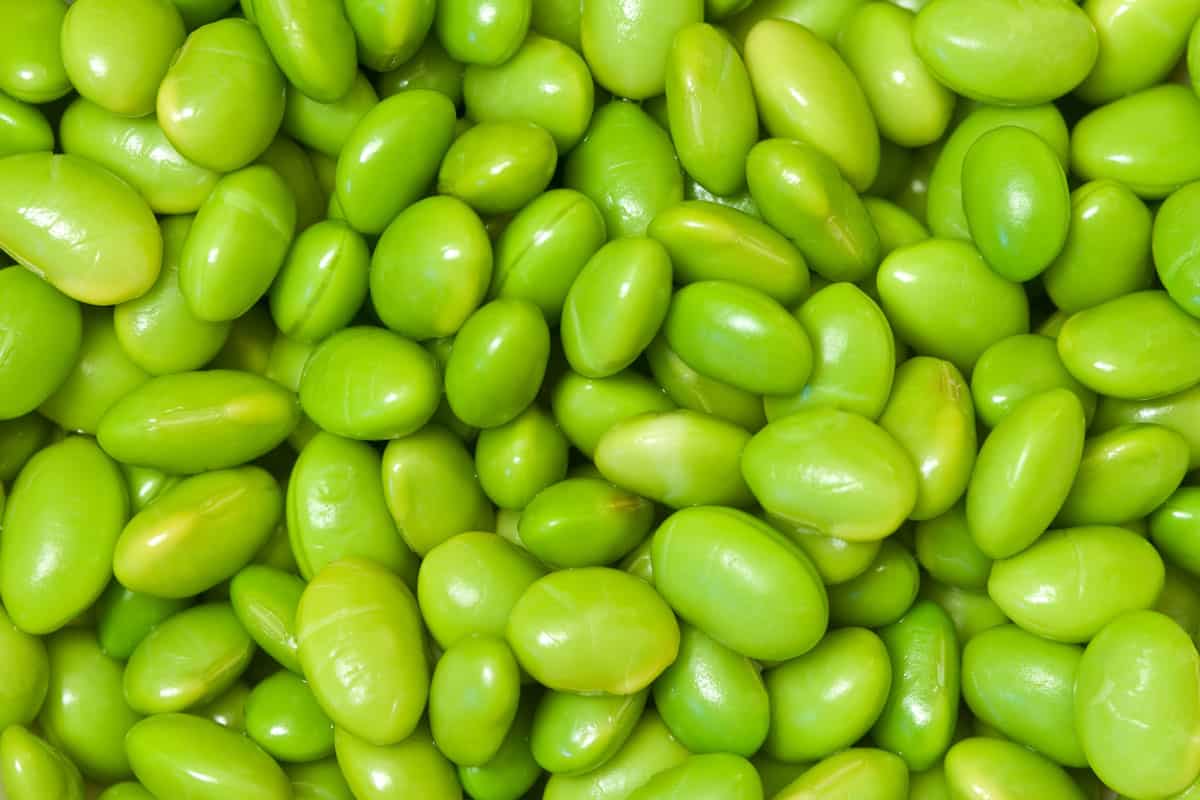 This potting mix has a pH of 6.3 to 6.8, works inside and outdoors, has an aerated texture, and comes in a 12-quart bag.

Do I Need To Soak Edamame Seeds Before Planting?

No. You don't need to fully saturate your edamame before planting it. As we mentioned, frozen edamame will need to defrost before going into the ground and can benefit from a quick rinse.

On top of that, you don't technically need to rinse off edamame seeds/beans if they're clean, so this is a step you can likely skip.

The most important part of this planting process is ensuring your edamame is deep enough in the soil. You want to give your seeds one inch of depth, allowing them to form roots and eventually sprout.

You also don't want to overwater your edamame once it's in the soil. Doing this can cause the beans to crack, which will cause them to germinate poorly.

How Long Does It Take For Edamame Seeds To Sprout? 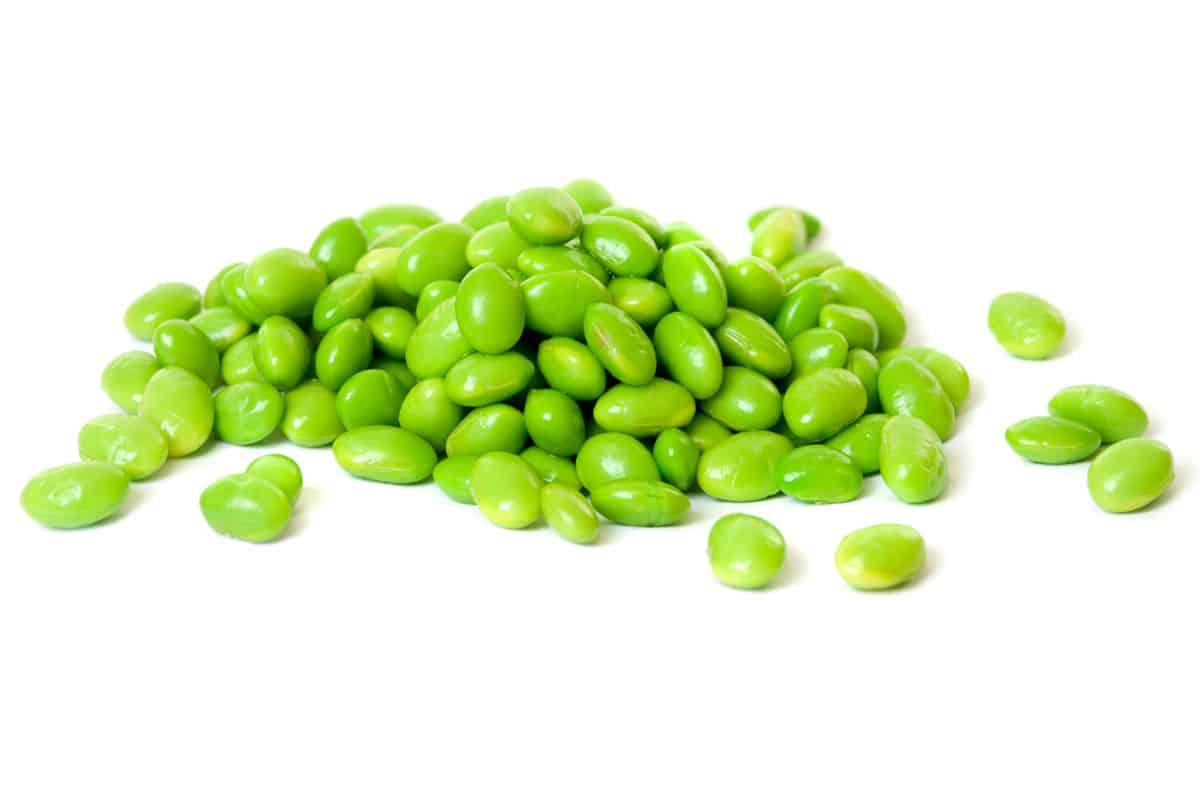 Now that you know the basics tracking the time your edamame takes to sprout is essential. You should usually see a small amount of growth from the soil at around two weeks.

According to Evergreen Seeds, edamame can sprout within seven days, although this can vary by individual plant/germination process.

As we mentioned above, overwatering your edamame right after planting can become an issue. Soaking an edamame bean/seed can also cause poor germination, so the less water, the better.

Edamame will also grow fastest in warm climates, so if you're indoor growing, we recommend placing your seeds near a bright window.

Some gardeners prefer to grow edamame in raised flower beds outside, so there are plenty of great ideas here.

Is Edamame Easy To Grow?

Yes, in general, edamame will be easy to grow and manage. Typically, plants growing in warmer, brighter locations will germinate the fastest and sustain themselves better as they mature.

Edamame can make for the perfect short-term summer crop, hence why growing them from frozen is so popular among gardeners.

Another interesting fact about edamame is that it's frost-hardy. Even if you have some growing in the ground outdoors, a freeze or two won't cause much or any damage.

However, that's not to say growing edamame from seed is always simple. For example, if you're somewhere that gets freezing through the early spring, you may want to wait before planting.

Even though edamame can handle a bit of frost, younger plants tend to be more tender to the cold.

Again, the milder the conditions, water and weather-wise, the better edamame beans will grow.

These seeds will produce pods within 80-90 days, are high in protein, come in a pack of 125, and have excellent online reviews from customers.

View these edamame seeds on Amazon.

Can You Grow Edamame Indoors? 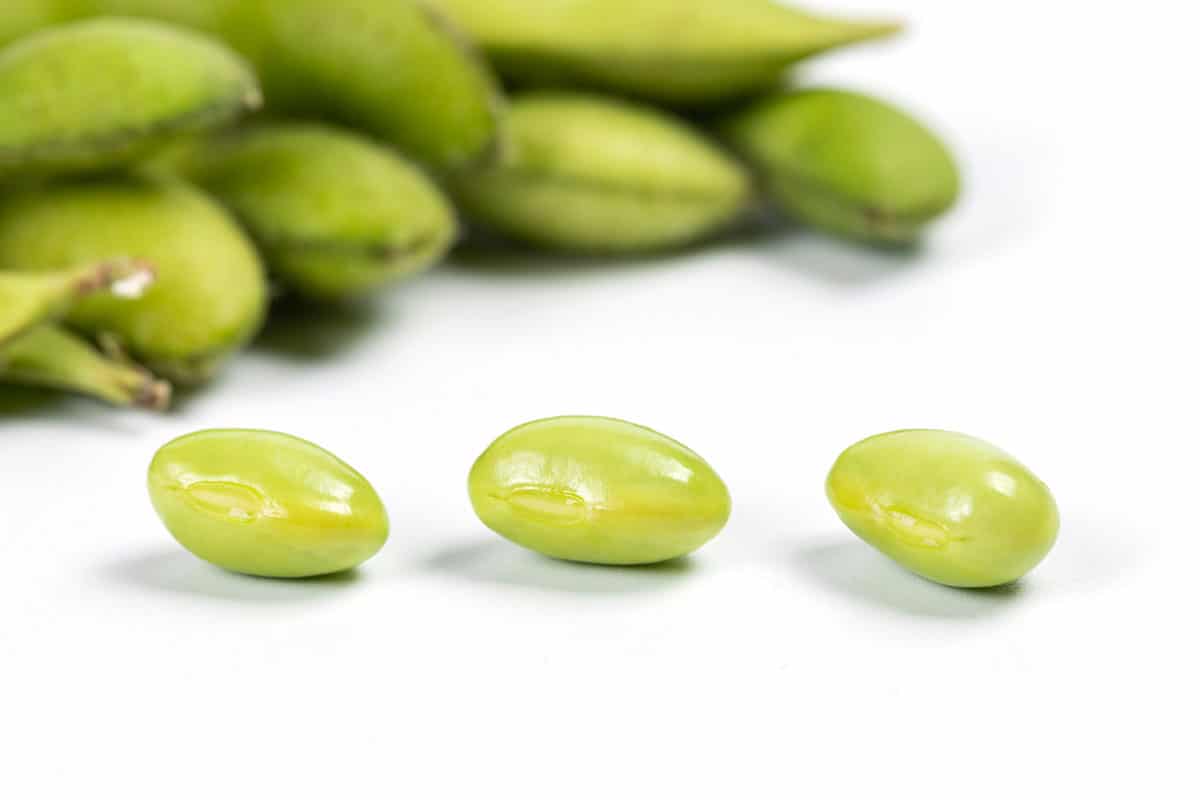 Yes, you can grow edamame indoors if the conditions are right. In general, an edamame plant will need six or more hours of sunlight each day.

So, if one of your windows can provide this, your edamame should be fine.

However, if your home is darker, you won't want to keep your seeds inside. If it's warm enough outside, you want to transplant your edamame into the soil or a pot.

Moving edamame outside in the spring is common, so doing this shouldn't disturb your plant too much. Again, you want to make sure the last frost of the winter has already happened, so your young edamame doesn't go into shock or die.

Many gardeners choose to start their edamame indoors during the winter and then transplant them outside once the temperatures rise.

Should I Grow Edamame In A Pot?

If you prefer pot-growing, this is certainly fine for edamame. Considering your plant won't get taller than 1-3 feet, keeping it in a pot can be a good idea.

Like many small bean plants, edamame doesn't become very large. Therefore, it's not always a good ground cover unless you plant many of them.

You also want to remember to give edamame some space. Ideally, anywhere from 12-18 inches would be best, but you can move your seeds a bit closer if you're short on square footage.

One of the most critical factors for edamame's success is sunlight. Whether growing one in a pot or the soil, your beans require warmth and sun exposure throughout the morning and afternoon.

For those using a pot, make sure it has a drainage hole to prevent your edamame from drowning.

Are Edamame And Soybeans The Same?

Yes, edamame and soybeans are essentially the same. Their difference is that edamame is technically considered a whole, "immature" soybean or "vegetable-type" soybean.

Furthermore, edamame is green, unlike a beige, brown, yellow, or even black soybean. Edamame will also have a different taste than soybeans and is a more popular snack.

LiveStrong also explains that edamame is essentially a soybean harvested when it's immature, hence the green tone.

You're growing and eating your edamame before it becomes a traditional soybean. Again, this isn't going to make a difference in how you grow and care for your beans, but it's interesting to know.

Edamame and soybeans also belong to the legume family, so you'll often find them in that plant category when shopping around.

Does Edamame Taste Better Than Soybeans?

In general, it is more likely for edamame to taste better than a soybean. Think of edamame as the greener, earthier-flavored version of a soybean packed with vitamin B.

Despite being the same plant, edamame tends to have more flavor because it's harvested sooner. Soybeans have a blander taste and are often used to make soy milk, tofu, and other "watery-tasting" foods/drinks.

That said, fully mature soybeans are healthier than edamame but won't be as tasty. Depending on what you're cooking, this may not mean much to you, but we recommend edamame for snack purposes.

You can also find pre-packaged edamame at the store, which has become a super popular snack among those living healthier lifestyles.

Since edamame doesn't contain harmful ingredients, it's worth trying if you're on a health kick.

How Long Does Edamame Live? 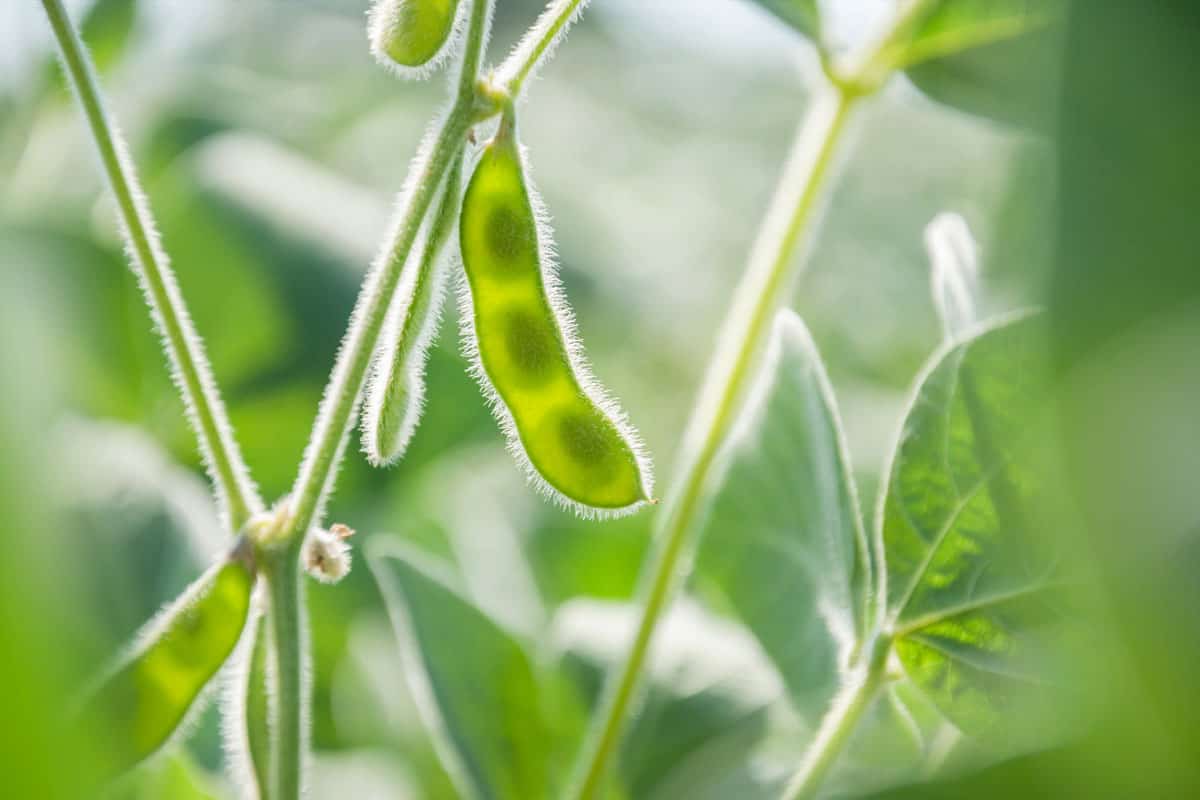 You can usually expect edamame to grow and live for a few months. Considering this bean won't be around too long, you don't want to depend on them for gardening.

Furthermore, edamame needs to be harvested after two or so months so you can eat them. Remember, these healthy beans are essentially young soybeans, so you want to keep them that way.

If you were to wait to harvest edamame, it would either become a blander soybean or die. If your plant is outside, there's also a possibility that an animal could get into your beans, so time is ticking.

How Do I Know When To Harvest My Edamame?

Since the harvesting window for edamame is pretty small, you want to ensure you keep an eye on your plant. Usually, edamame is ready to eat when its pods are plump, bright green, and look like pre-packed options.

As we said, forgetting to harvest your edamame or waiting too long can result in a lackluster taste. Some people compare past-due edamame to a lima bean in flavor and texture, which isn't going to be as tasty.

To Finish It All Up 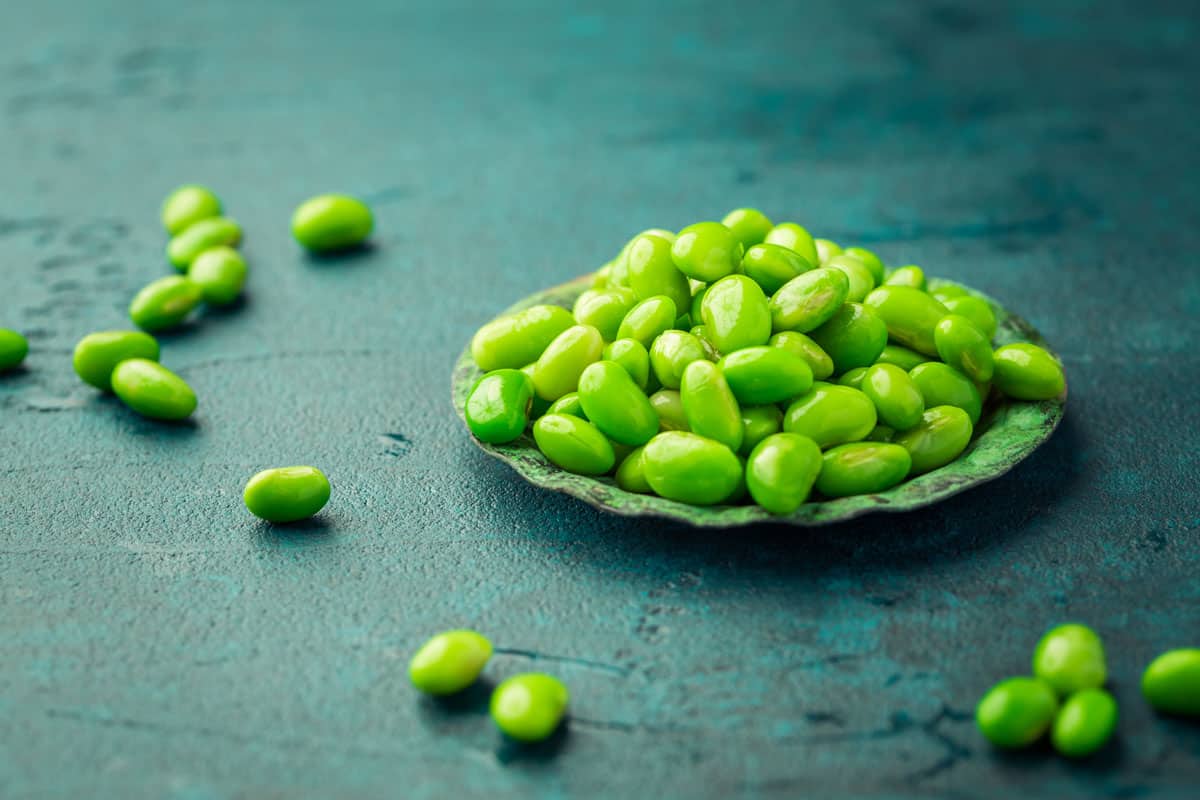 Whether you have edamame in your freezer or want to buy some, it is possible to grow some from seeds. We found that edamame can go into the ground after being frozen, as long you allow it to defrost.

You might want to give your beans a quick rinse, but this isn't always necessary.

Made it to the end? Check out these helpful related posts below!

Can You Grow Beans And Chick Peas From Dried Beans? [Or Fresh!]

How To Grow Mung Beans Indoors

How To Grow Beans Indoors