Figuring out the best way to remove a plant from your garden can be challenging. For example, do you have a cluster of brambles you need to get rid of but don't want to dig? Since this shrub species can be prickly, is there an alternative way to clear them?

Well, we've done some research into this question and have the answer below!

If you don't want to dig up brambles from your yard, there are other ways to clear it. Generally, you want to use an herbicide with the active ingredient "glyphosate" to kill off brambles entirely.

Since these shrubs can be prickly and dense, it's best to spray a good amount of your product onto them (even a few times). Furthermore, you might want to cut the branches of your brambles with garden shears before applying herbicide, but that's up to you.

As we start this article, we will cover all things getting rid of brambles and discuss how to clear them without digging. Whether you have too many brambles growing in your garden, keep hurting yourself while digging, or need other help, we've got your back. With that said, let's dive right in!

Can You Remove Brambles Without Digging Them Up? 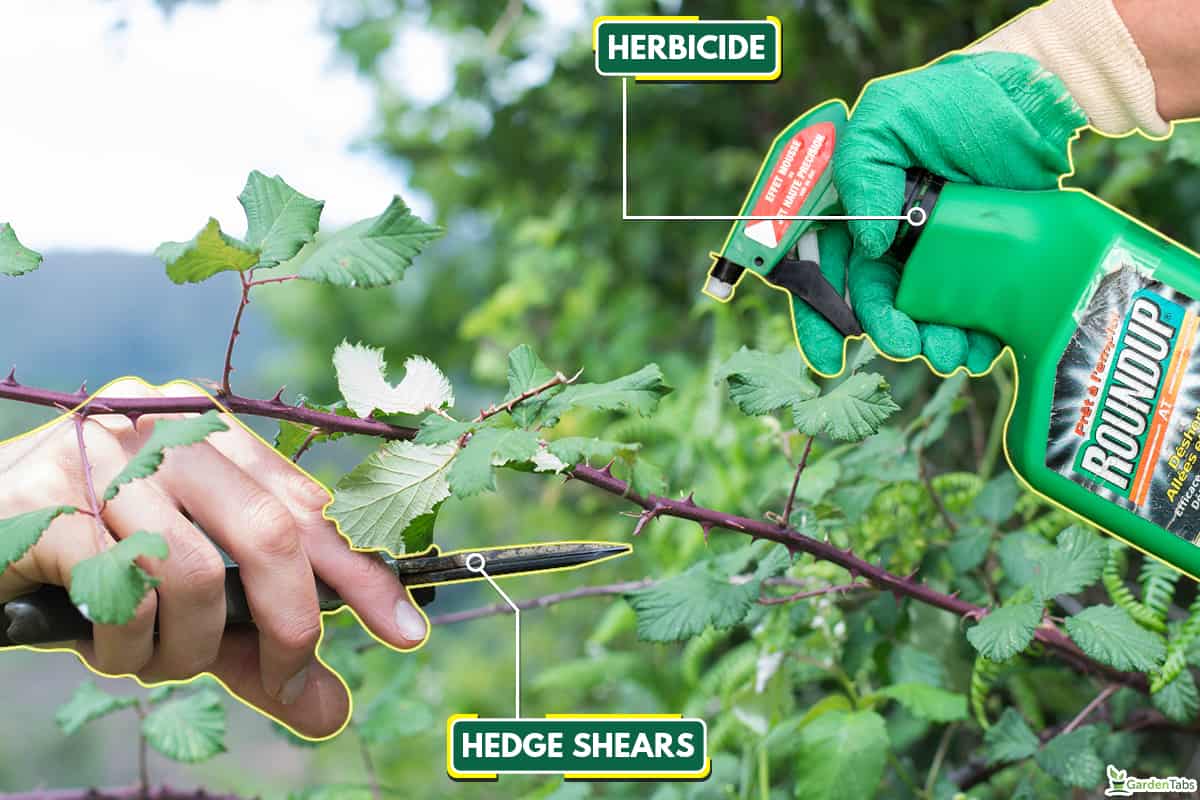 Yes! Since brambles aren't always easy to dig and can be prickly, there are alternatives to digging them up for removal. Generally, you want to start by pruning the brambles you see growing with a pair of garden shears.

Next, you need to apply an herbicide product with glyphosate to the remaining bramble shrubs. This will work to kill your plant and keep it from coming back later on.

Many experts recommend cutting a bramble down to six inches using a hedge trimmer or shears. Of course, you want to assess how big your bramble is before choosing your tool.

For smaller brambles, that's when garden shears are appropriate, while larger plants require an automatic trimmer/whacker. It's best to treat brambles like weeds, especially if they exhibit invasive or aggressive behavior.

Once you cut back/down your brambles, that's when you want to douse them in herbicide. That will kill them within a few days and should prevent future shrubs from sprouting.

How Do You Quickly Kill Brambles? 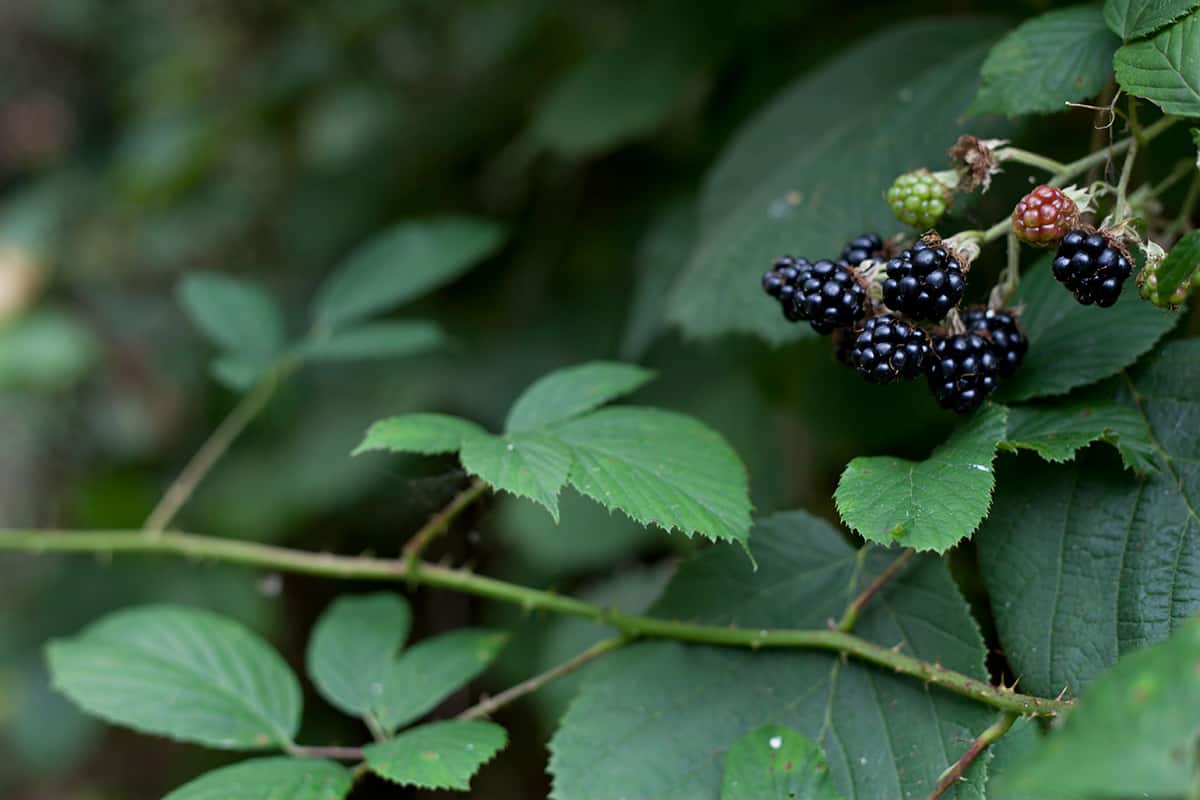 We recommend using a targeted herbicide if you need to get rid of brambles quickly. As we said before, glyphosate is an active ingredient to look for, as it works wonders for this species.

Whether you use a name-brand herbicide or one that comes from a smaller company, you want to use products that kill all or most plant types.

Luckily, glyphosate doesn't discriminate and kills essentially any plant you apply it to. Therefore, adding it to the branches and base of your brambles should prove to be successful.

Remember, some pros recommend cutting down brambles before using herbicide. That will help speed up this killing process. Especially if you spray weed/plant killer on brambles immediately after cutting them back, this opens them up to glyphosate even further.

The easier access your herbicide has to the bramble, the faster and more effective it will work. This is also perfect for people who do not want to spend time digging each shrub from the soil, so it's a win-win.

Can I Use Roundup On Brambles? 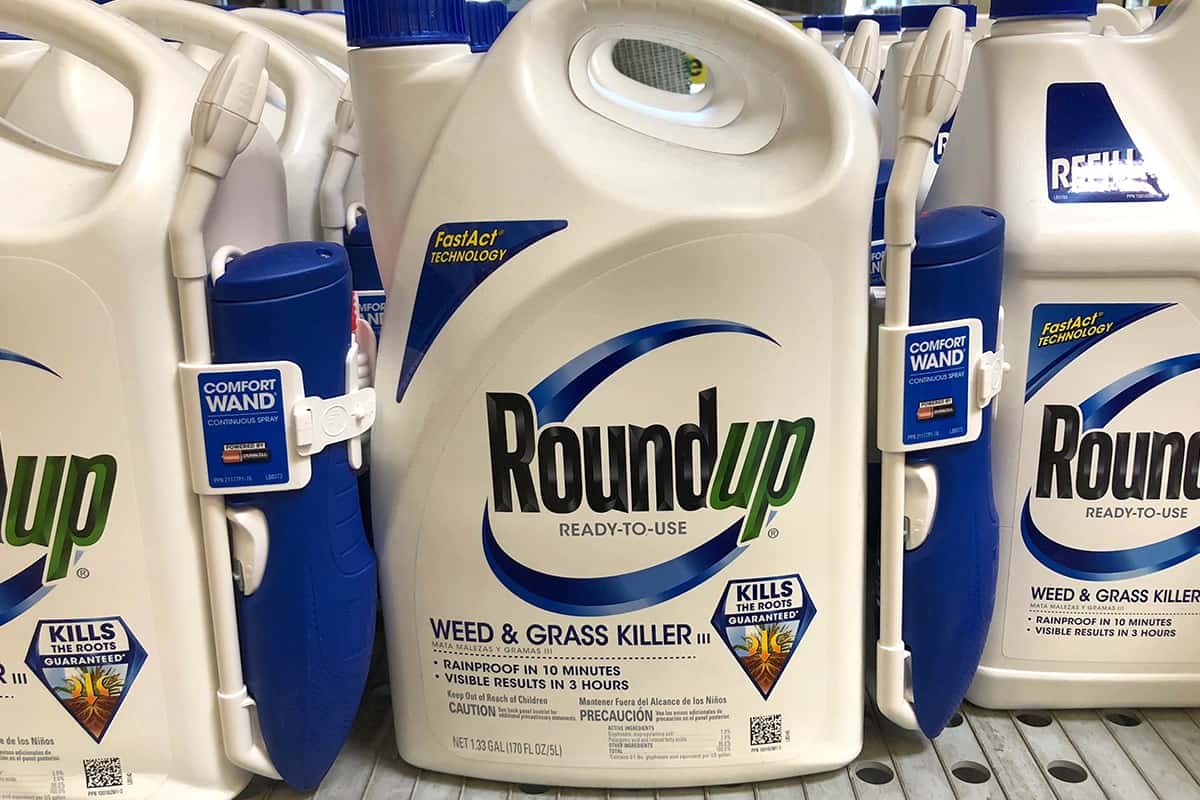 Yes! If you don't want to dig or pull up your brambles, you can certainly use Roundup. As we covered above, an herbicide is a quick option for killing brambles.

Roundup's main ingredient is glyphosate, making it perfect for woodsy plants. According to experts, you want to spray 'ROUNDUP® Tough Ready To Use Weedkiller' on your brambles.

That's because this targeted herbicide works for woodsy shrubs like brambles and mentions them specifically for the application.

On top of that, you can expect Roundup to start killing brambles as soon as it touches them. So, you might begin to notice wilting branches and discoloration within a few hours.

Again, you need to follow the directions on your Roundup to get the most out of its formula, so keep that in mind. Luckily, Roundup usually comes with a spray wand for weed spraying, making the process easier and safer.

One thing to remember, however, is that Roundup is not selective in the plants it kills. Therefore, you have to only spray it on the brambles you need to kill, as it will overpower any plant it touches.

This herbicide kills the toughest grass and weeds, has a pump-and-go design, doesn't require mixing, is rainproof in ten minutes, should give results in as little as three hours, and comes in a 1.33-gallon container. 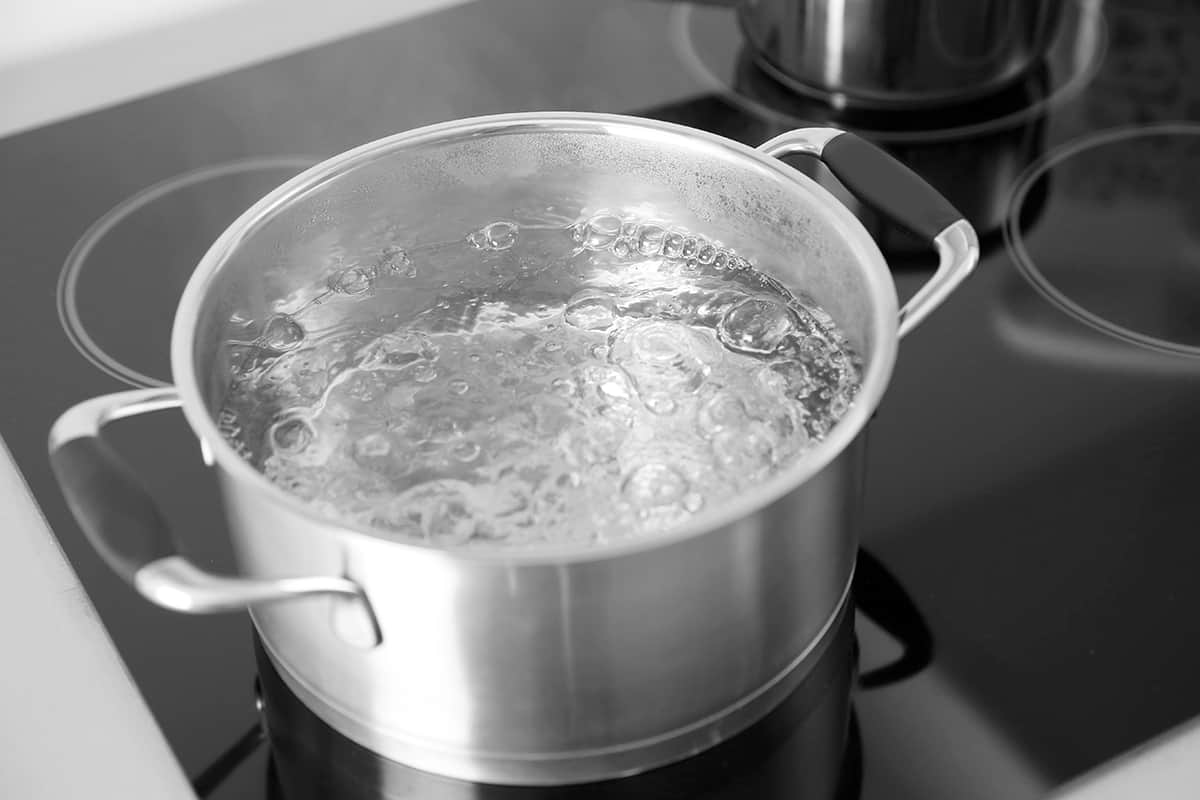 If you want to try a more natural alternative to herbicides for your brambles, boiling water may be an option. Generally, as you pour boiling water onto a plant, this will destroy the structure of its cells.

However, doing this takes far longer than simply pulling the shrubs or spraying them with chemicals. So, if you're worried about timelines, we don't recommend boiling water for your brambles.

On top of that, you can't always rely on boiling water to permanently get rid of a plant. Since the water may not be hot enough when you pour it, this method doesn't have a high success rate for certain species.

If your bramble is mature, pouring boiling water on and around it may be more trouble than it's worth. Remember, it's sometimes better to go the chemical route if you have an aggressive or harmful plant growing in your yard, as they'll work the fastest.

And according to Iowa State University, boiling water is a contact killer. That means it will only kill the plant it comes in contact with. In contrast, like Roundup, herbicide continues to kill far beyond the initial spray.

Yes! Another great way to get rid of brambles without digging is to use salt. Like an herbicide, applying salt to a plant can inhibit it from growing and functioning correctly.

Therefore, they should start to die if you create a salt mixture and sprinkle it on and around the brambles. All you need for this is salt, a spray bottle, and water.

According to Express, you want to create a salt mixture using two parts salt with one part water until the solution fills the spray bottle. Then, you can spray it on your brambles, repeating this process until the plant begins to die.

Of course, this method is another one that will take longer than herbicide. Since you aren't using harmful chemicals on your plant, the salt mix will take a couple of weeks to do its job.

However, that might be worth it if you're concerned about chemicals in your soil. Remember, Roundup and other powerful weed killers don't just target one species: they kill any that they touch.

Moving to vinegar on brambles, this idea can work but won't always be 100% effective. Generally, you need to mix vinegar and salt to kill and control brambles successfully.

In addition, you have to use a lot of vinegar to kill brambles, especially if they're older. This can result in extra time and products being used, which not everyone can handle.

One thing to recall about brambles is that they are stronger shrubs. Therefore, using DIY plant killers like vinegar and salt won't always affect them.

Unlike glyphosate, which is made to inhibit plant growth enzymes, salt and vinegar attack from more of a cellular standpoint.

As you apply them to your bramble, they will penetrate the plant and slowly kill it. This is essentially the long-tail version of an herbicide killing, all without the potentially harmful chemicals.

So, you can try vinegar on brambles to kill them, but we're not sure how effective it will be long-term. 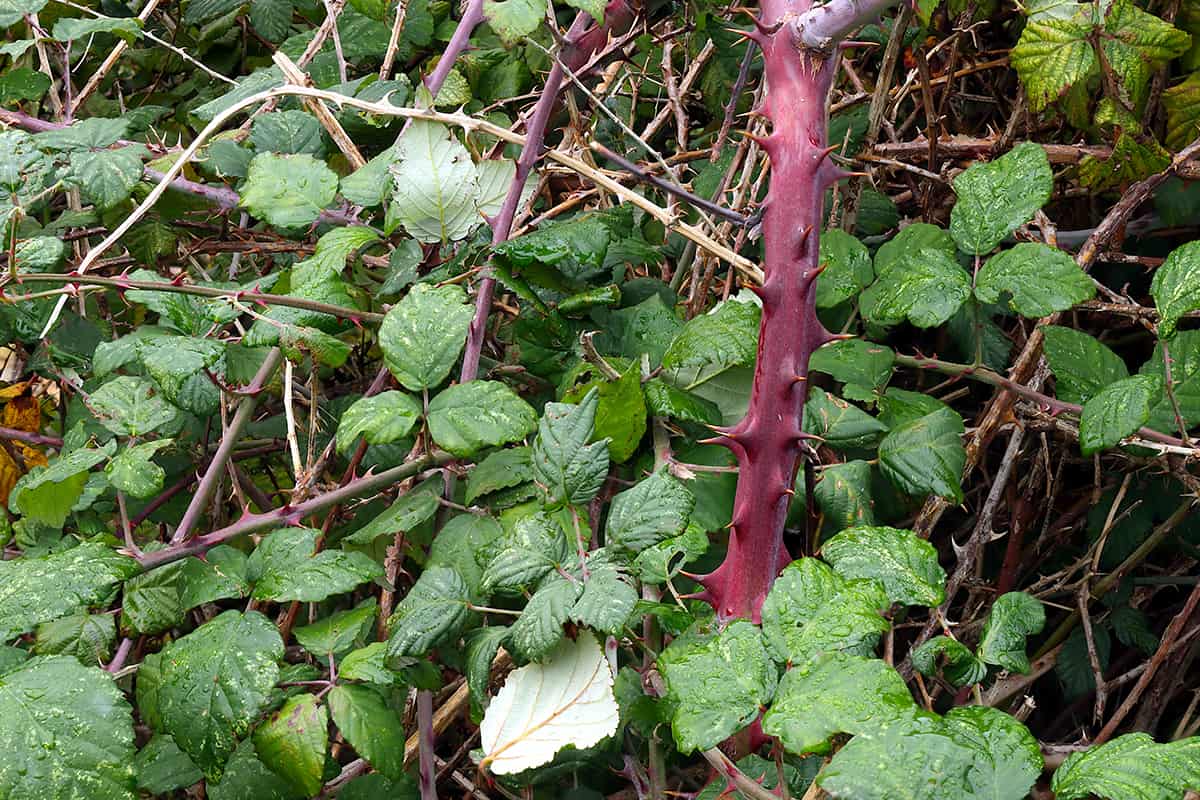 Although there are many bramble varieties that are naturally occurring, there are plenty of invasive ones that make their way into gardens and other spaces.

The same goes for other bramble varieties, whether native or not, to a given ecosystem. Most times, brambles aren't used for landscaping.

Since this species has a more weed-like reputation, you will find it more along roadways and in natural temperate environments. Most shrubs with thorns aren't favorable for gardening, as they're hard to manage and nearly impossible to pull.

Brambles can also latch onto other plants in a garden and overtake them, which is where the invasive behavior begins. Giving them their space is the key to having brambles in your yard.

To keep the peace, you want to section off bramble like any potentially aggressive species. The last thing anyone wants is to introduce an invasive shrub to their once-harmonious landscape accidentally.

Whether you have brambles that are out of control or want to remove a few, it's essential to know your options. We found that the best way to get rid of brambles without digging would be trimming them and apply an herbicide.

An ingredient you want to look for in your weed killer is 'glyphosate,' which kills brambles quickly and effectively. Additionally, you can try pouring boiling water, salt, or even vinegar on brambles to kill them.

However, this will take longer than using chemicals, but if you're not in a hurry, that won't bother you. Be careful around brambles because they're thorny and good luck gardening!

And while we have your attention, check out these helpful related garden posts below:

Should You Trim A Yucca Plant To Remove Dead Leaves?

How To Use A Yardworks Weed Puller [Step By Step Guide]

Can You Spray Roundup At Night [Or Does It Need Sunlight To Work]?