Finding new plants to have throughout your garden can sometimes be easier said than done. Do you want to try growing elephant ears but don't know whether they're invasive or not? Are these plants generally aggressive towards other species nearby?

Well, we've done plenty of research and have the answers to these questions below. Let's get into them!

No. You can generally expect elephant ears within North American landscapes to be non-invasive. Although this species is not native to North America, it has become neutralized over the years.

With that said, elephant ears can "invade" certain spaces due to their large foliage, often blocking the sun from the plants underneath them.

So, if you want to grow elephant ears but don't want to have other plants in your landscaping suffer, we recommend giving them some space.

As we begin, we will cover all things elephant ear growing and discuss whether this species is invasive to your other plants. If you're new to this plant, have one in your yard, or want to learn more about them, you're at the right place. With that said, let's dive right into this topic below! 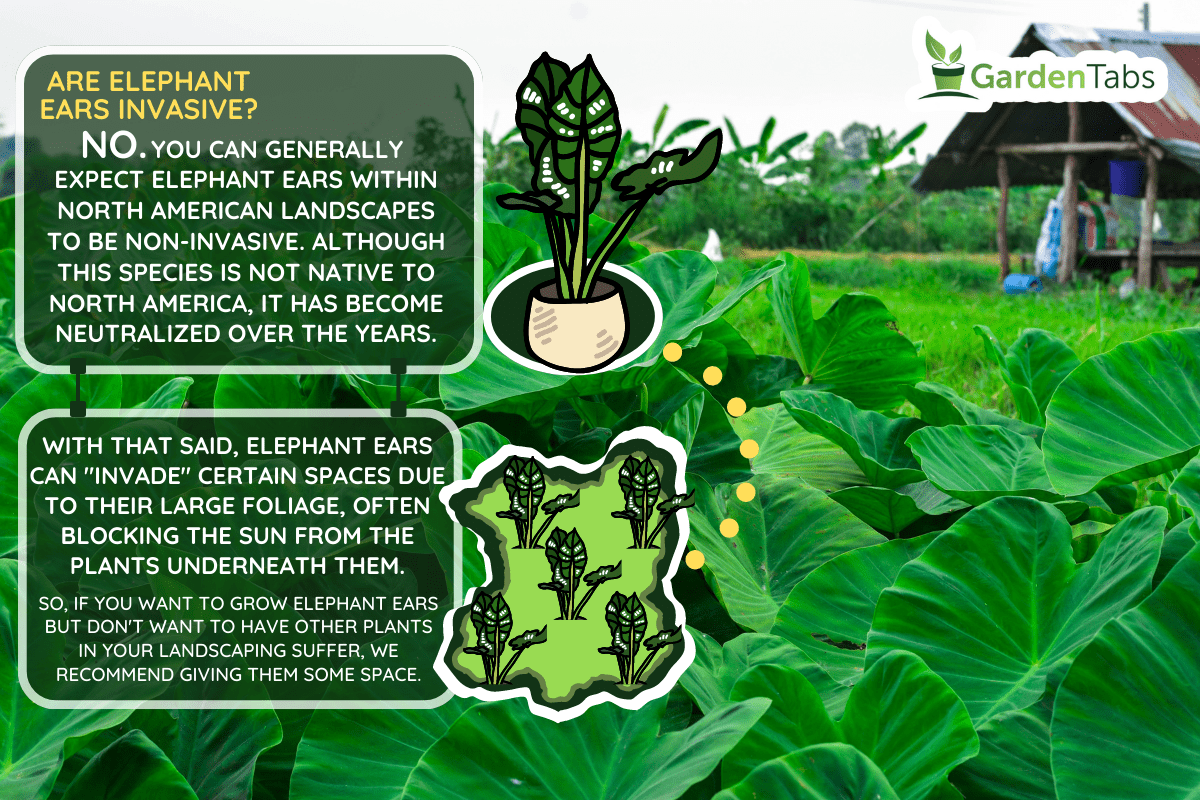 Are Elephant Ears An Invasive Species?

No. Elephant ears are not typically invasive to North American ecosystems. However, this plant can become somewhat of an invader because of its size and foliage, hence the confusion.

One of the reasons many people avoid growing elephant ears is that they can take over sections of a garden. Of course, this is much like any other plant, so if you keep yours pruned, this won't become an issue.

Typically, elephant ears are more of a neutral species within your garden. That means they aren't necessarily aggressive but can become a nuisance for smaller plants beneath them.

Therefore, we don't recommend planting elephant ears beside a smaller, more fragile plant, as this is a recipe for invasion.

You can also section off your elephant ears to keep them growing in one area, so there are plenty of ways to have them alongside other species within your landscaping. 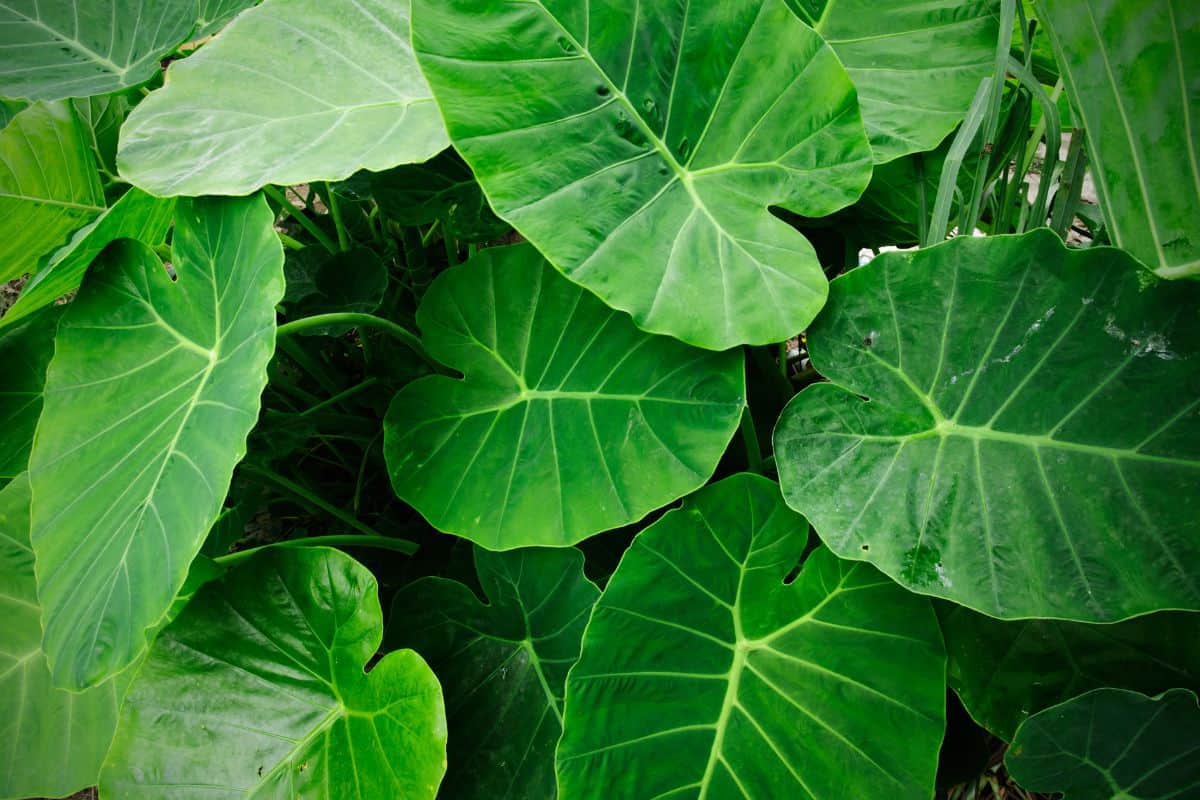 How Do You Keep Elephant Ears From Spreading?

The best way to prevent elephant ears from spreading is to spray all aerial parts with an herbicide. Doing this will prevent your plant from getting bigger or expanding its canopy, ultimately helping whatever's growing beside or under it.

You can expect this to be a slow process, but if you're vigilant, it will be successful. Close monitoring and patience are key to keeping an elephant's ear at bay.

Furthermore, you can also prune your elephant ear every few weeks/months to keep it from spreading, so there are a couple of ways to do this.

Sometimes, it might even be best to remove entire elephant ears if they become too overgrown in your garden. This all depends on the stage of their growth.

This targeted herbicide works to control unwanted weeds and plants, doesn't require mixing or measuring, has a blue dye color, works year-round, and comes in a quart-sized bottle.

See it here on Amazon.

Where Are Elephant Ears Native To? 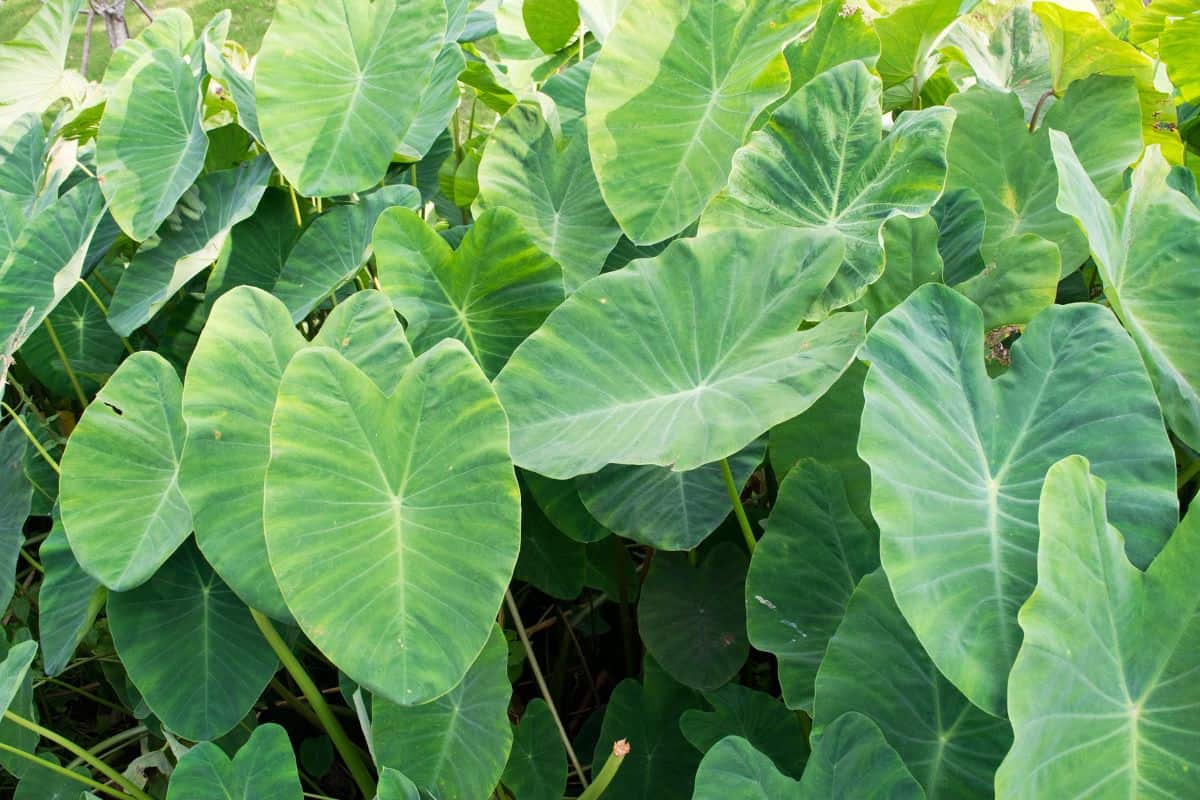 As we said, this species is neutralized here in the United States, and throughout North America, so it won't be necessarily invasive.

Additionally, the 'Xanthosoma' elephant ear variety is native to tropical America, so there is one that originates on this side of the world.

Regardless, elephant ears love tropical weather. This species is also a staple in tropical countries for its edible starchy corms or tubers, so that's interesting.

If you live in Florida, you might notice a massive number of elephant ears growing near Fernandina Beach, which has become a hub for the plant species.

Elephant ears have become so prevalent across Florida that many mistake them for weeds!

Where Do Elephant Ears Grow Best?

The best places to grow elephant ears would be USDA zones 10-11. As we covered above, these plants prefer topical climates and don't do well in the cold.

You want to try and grow these in places with conditions similar to Southeast Asia.

For temperatures, it's best to keep elephant ears somewhere the weather stays between 70 and 85 degrees during the day and down to 60 degrees at night.

However, you can sometimes grow elephant ears as annuals in cooler climates, but you will need to replant them every year.

In general, though, elephant ears will return each year or stay green 365 days, depending on how tropical your growing climate is. 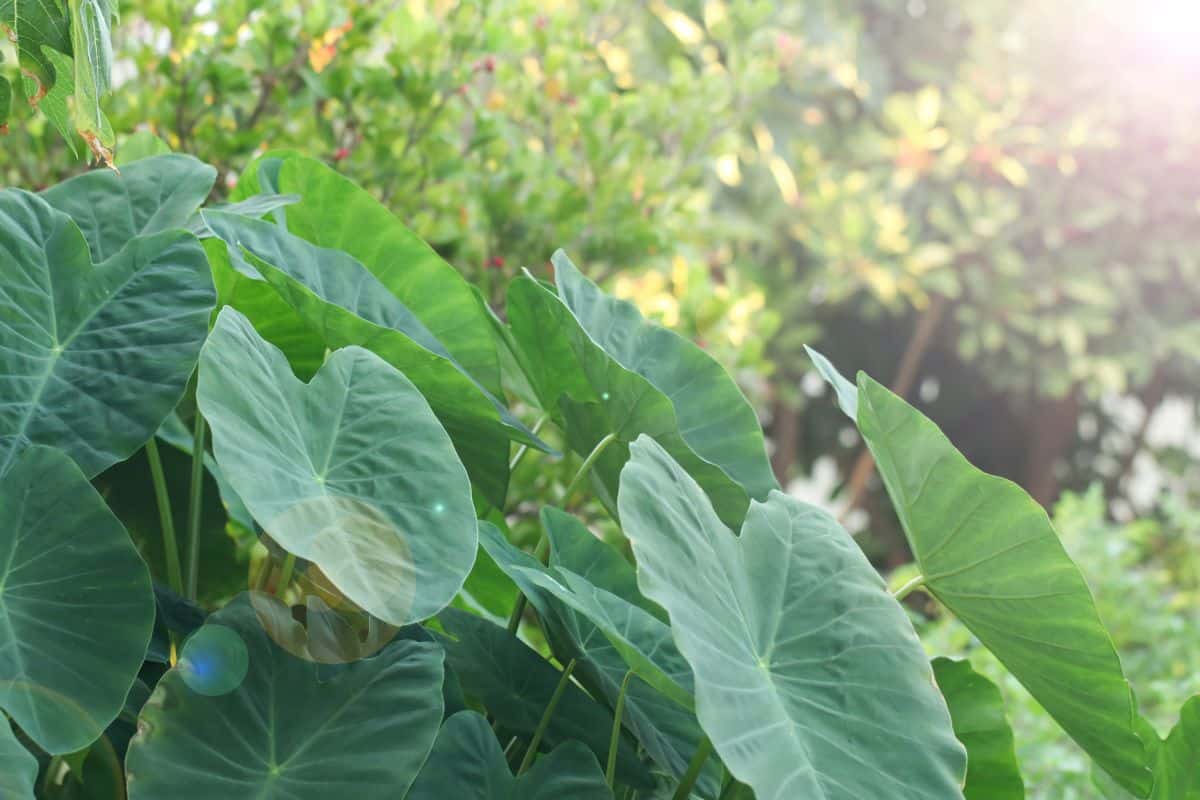 Yes, it is possible and common for elephant ears to multiply. That said, you will likely need to separate your elephant ear by cutting the tuber into pieces and then replanting them.

It's also essential to ensure a "corm" inside the tuber, which is comparable to the eyes of a potato. In contrast, you won't likely see elephant ears multiply in droves without you propagating, so they shouldn't take over a garden independently.

Like any plant species, elephant ears will expand in size and potentially sprout other plants from the soil nearby.

You also want to factor in the climate where you live, as that can affect the chances of your plant growth and multiplying rapidly.

Should I Cut My Elephant Ears Back?

If you notice the elephant ears in your yard become too big for their current spot, that's a good time for pruning. As we said earlier, you can prune these plants to be smaller, which can help prevent invasive behaviors.

Many experts also recommend cutting back elephant ears if you live in colder climates. You can store their tubers indoors during the winter weather and replant them once spring hits.

Again, you want to remember that elephant ears will die if you leave them outside in weather below 60 degrees Fahrenheit, so that's something to be aware of.

Some people compare the overwintering process of dahlias to elephant ears, as they're very similar, so if you have those two species in your garden, try to cover them and bring them indoors or cultivate them.

Specifically, for those in USDA zones 1-6, you need to cut back your elephant ears to roughly six inches tall. In contrast, if you are somewhere tropical, you don't need to do much pruning at all.

Do Elephant Ears Grow Better In Pots Or The Ground? 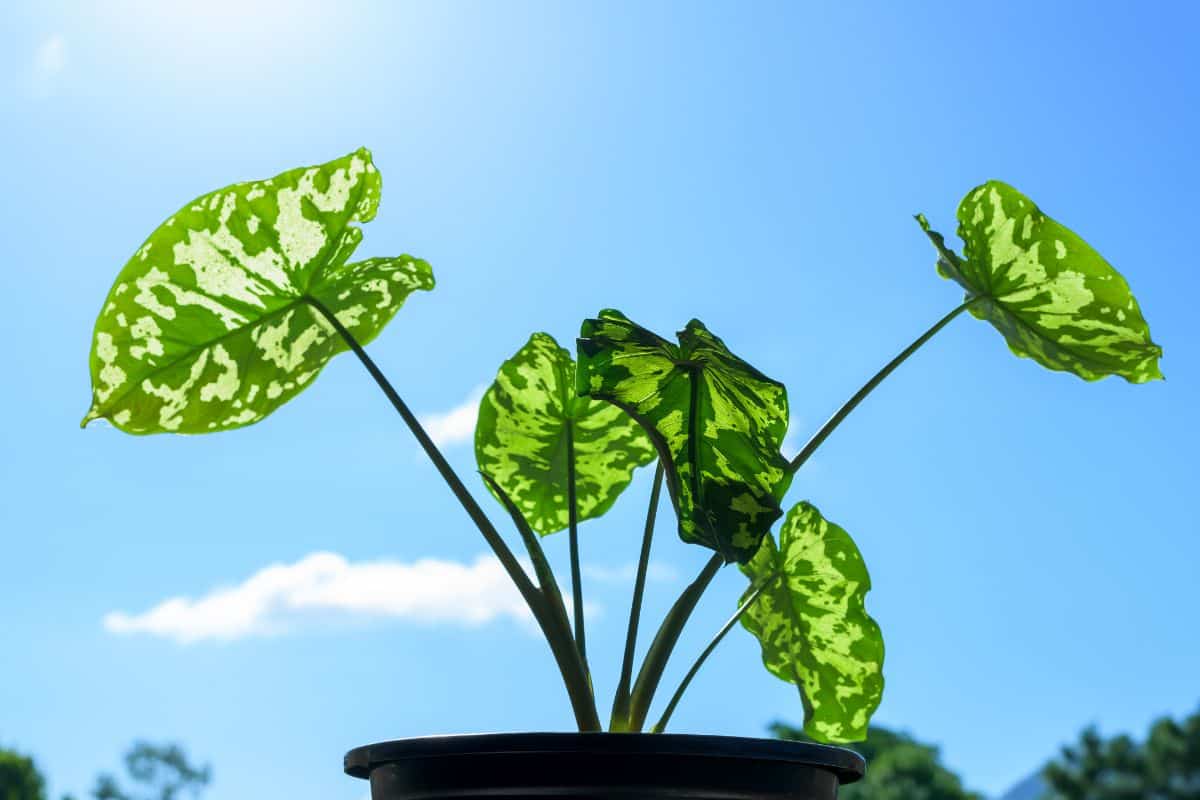 You can expect an elephant ear to grow well anywhere it has enough space. For example, if you decide you want your elephant ear in a pot/planter, it needs to be large enough to sustain its roots.

The same goes for the ground, so avoid growing elephant ears or other plant species too close to each other. Doing this can also prevent possibly invasive behavior, so it's a win-win.

Many experts recommend having elephant ears in larger pots as they dry out slower. That means you don't have to water your plant frequently, which is always good.

It's imperative to consistently keep the ground near an elephant ear moist, as this will aid in a healthy plant for years to come.

So, we recommend using a pot no smaller than 10-12 inches for a newer plant.

This pot is ten inches, has a modern white design, can go inside or outdoors, is fiberstone ceramic material, includes a drain hole, and comes in black.

How Big Do Elephant Ears Get?

You can expect a mature elephant ear to reach anywhere from three to six feet tall. You can also expect the spread of your elephant ear to be around the same as its height, so this plant can be massive.

Of course, the size of your plant depends on how well you care for it. Furthermore, elephant ears won't become very big if they don't live somewhere tropical, so that plays a role too.

In general, as long as your plant gets enough sunlight, and moisture, and has space to grow and mature, it will become quite expansive.

The soil your elephant ear is in should also be more acidic, ideally having a pH of 5.5-7.0. If you can try and recreate these conditions in your own backyard, it's possible to see your plant become six feet tall within a few years. 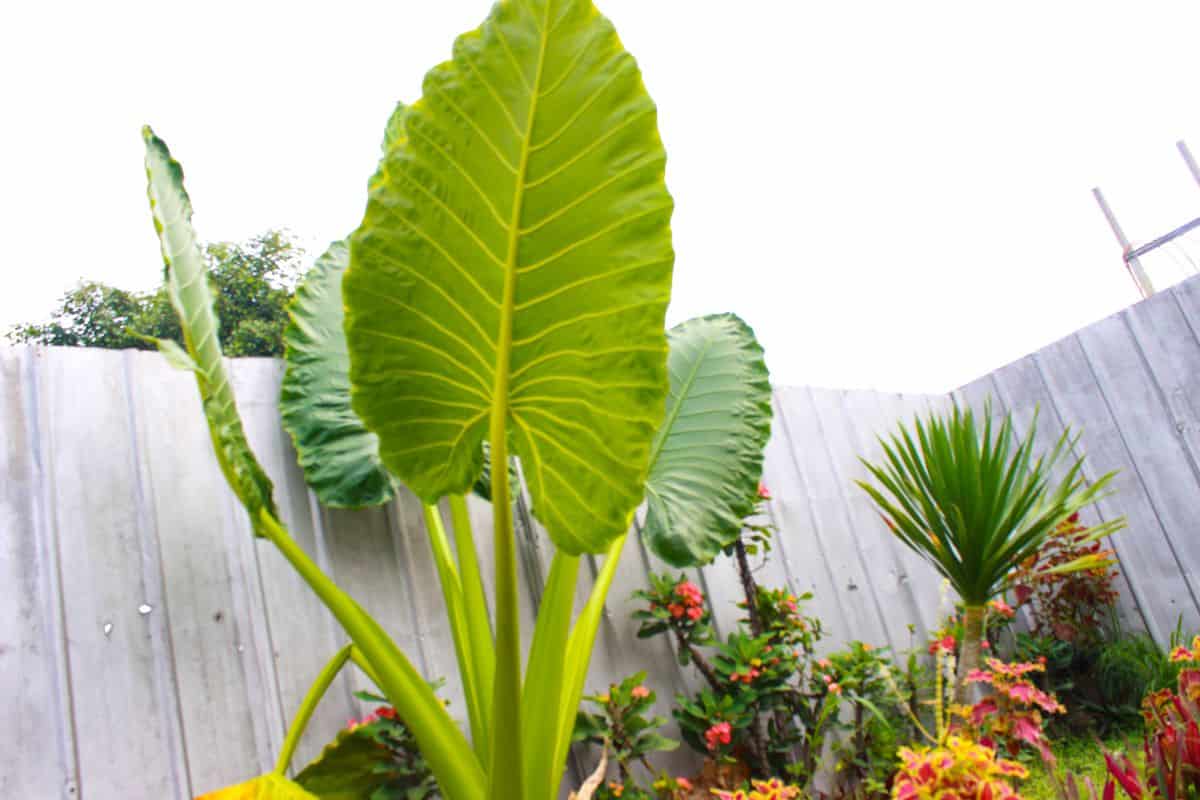 Depending on where they live, elephant ears can last indefinitely. Considering this species is technically perennial in tropical growing zones, you can expect one to live for years if the weather's nice.

On the other hand, if you are somewhere with freezing winters, your elephant ear won't see more than one year outdoors. So, a good way to keep one alive is to bring it inside during winter.

Many people have elephant ears as houseplants, so if you want to have one but don't live in the correct USDA zone, you can certainly grow one indoors year-round.

Whether you have an elephant ear plant growing in your garden or want to get one, it's essential to know whether this species is invasive or not.

Luckily, we found that an elephant ear won't exhibit invasive or aggressive tendencies throughout North America. Furthermore, this species can be trained to stay small if you regularly prune it, so that's what we recommend for worried gardeners.

Overall, elephant ears prefer tropical climates and aren't difficult to maintain, so if you want a unique species in your landscape, they're worth considering.

Made it to the end? Check out these other related garden articles below!

Why Is My Elephant Ear Dying? [And What To Do About It]

7 Perennials That Thrive In Acidic Soil