No, viburnum beetles do not attack other plants. Viburnum leaf beetles feast strictly on the leaves of the viburnum species.

This post will cover the relationship between viburnum plants and the viburnum beetle. Keep reading to learn how to protect your plants from these pests.

What Are Viburnum Beetles? 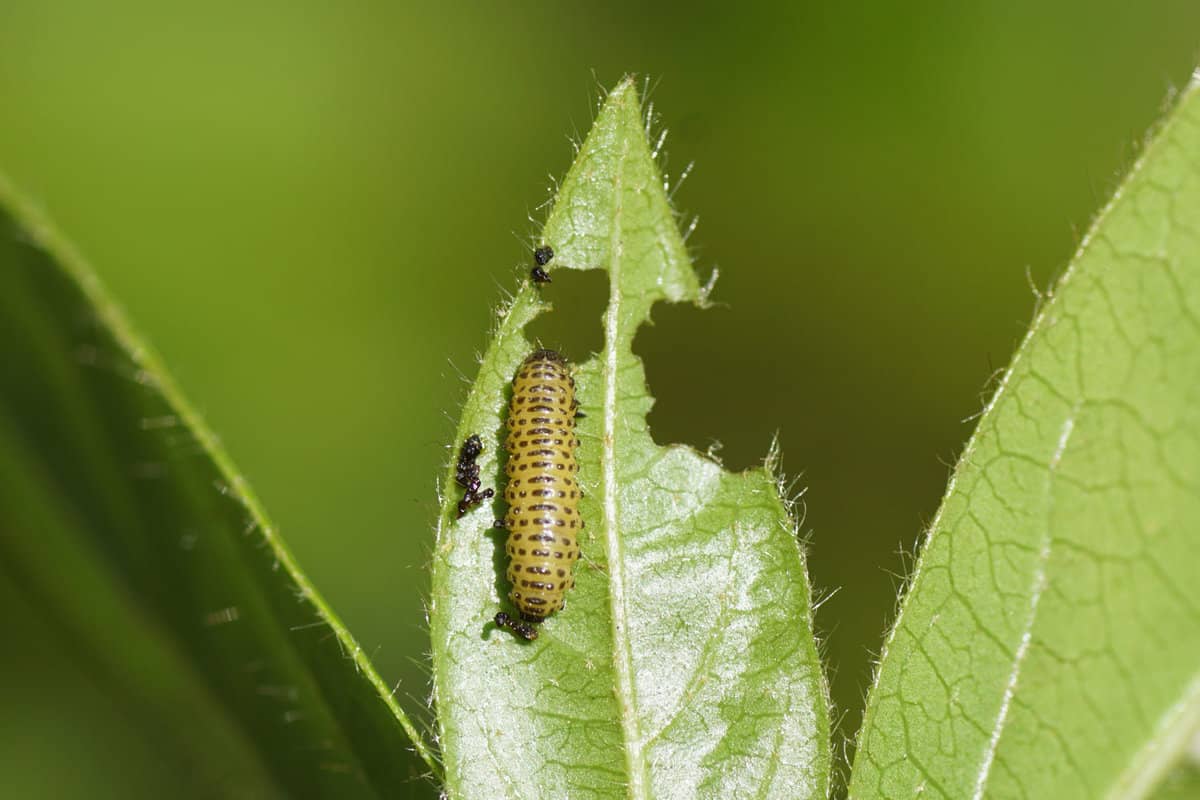 The viburnum beetle is just one of the 37,000 different species of leaf beetles. Every single one of those leaf beetles is a strict herbivore. As their name leads on, they mostly eat leaves. Although, occasionally, leaf beetles will eat the flower or fruit of a plant.

Leaf beetles are named based on the plant they flock to. A few other examples of leaf beetles are the mustard beetle and the asparagus beetle. Classifying leaf beetles is an interesting process. It involves something called a tarsal formula.

Leaf beetles are easily recognizable due to their 5-5-5 tarsal formula. They are part of the Chrysomelidae family, which is built from a number of insect characteristics. This means there is a culmination of traits that entomologists consider before grouping them.

How Do Viburnum Beetles Attack? 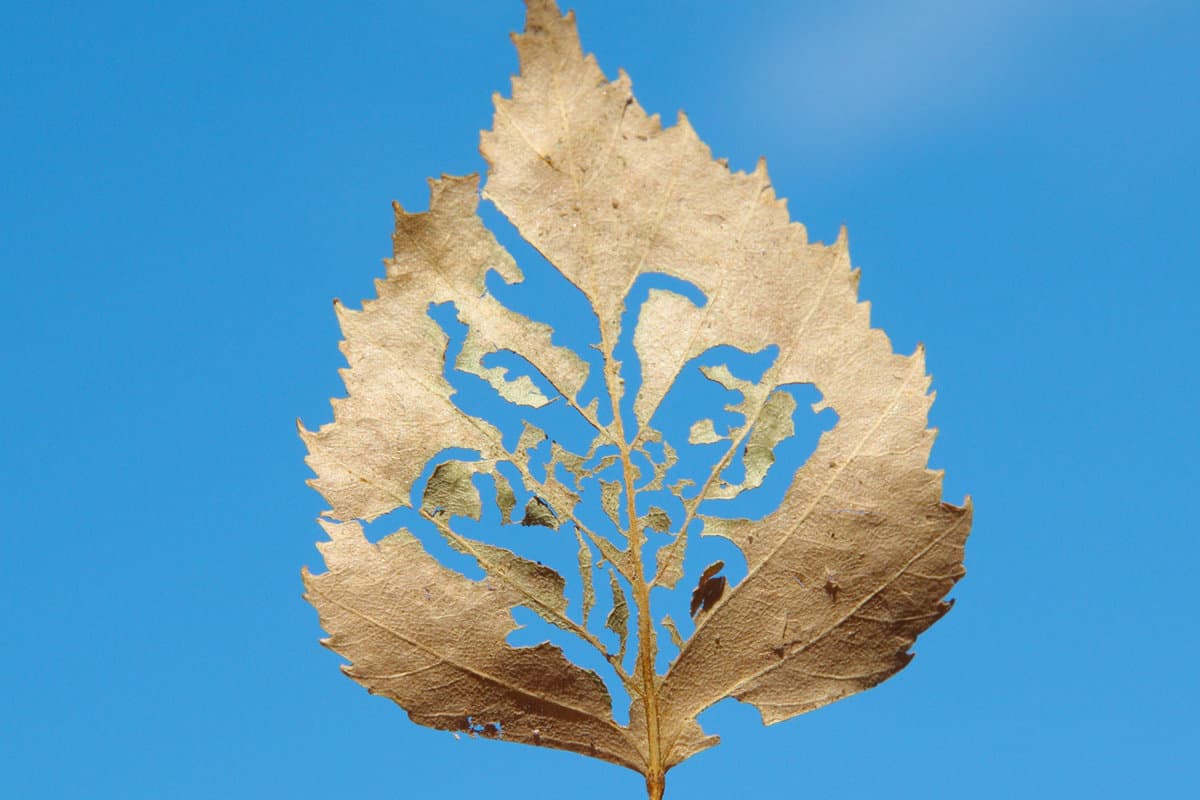 Adult viburnum beetles will lay hundreds of eggs in the summer and fall. These eggs will sit on the plant until spring. Summer is when the real action happens.

The eggs hatch, and the larva exit hungrily. The Royal Horticultural Society writes that the majority of viburnum leaf damage is performed by the beetle larva. After two months, the larva transitions into adult viburnum beetles. Females lay eggs on the underside of the plant, and the cycle repeats.

Viburnum leaf beetles have a distinct way of chewing through leaves. They essentially strip the leaf of tissue, leaving behind only the veins. This process is called leaf skeletonization.

A handful of viburnum species have developed a resistance to the beetles. These include, but are not limited to, tea viburnum, dawn viburnum, Korean spice viburnum, and the Japanese snowball plant.

How Do You Get Rid Of Viburnum Beetles?

The most simple way of removing viburnum beetles is to prune infected branches. Since the larva does the most damage, targeting the eggs will dramatically decrease the summer infestation.

Other forms of removal include introducing predatory insects. This can be tricky because you want the bugs to consume the beetles, not the plant.

Lacewing larvae are experts at eating unwanted pests while protecting foliage. If introducing more bugs sounds like a horror story to you, fear not, for there is always insecticide. It is often not the most environmentally friendly and can cause serious soil damage if used recklessly.

Imidacloprid is an insecticide used agriculturally and as a topical medication to treat fleas. The compounds are absorbed into the soil and taken up by the plant. When bugs consume the plant matter, the chemicals mimic nicotine and attack their immune systems.

For more information on removing pests, check out our related post here: How To Get Rid Of Caterpillars Without Killing Them.

Are Aphids A Type Of Leaf Beetle? 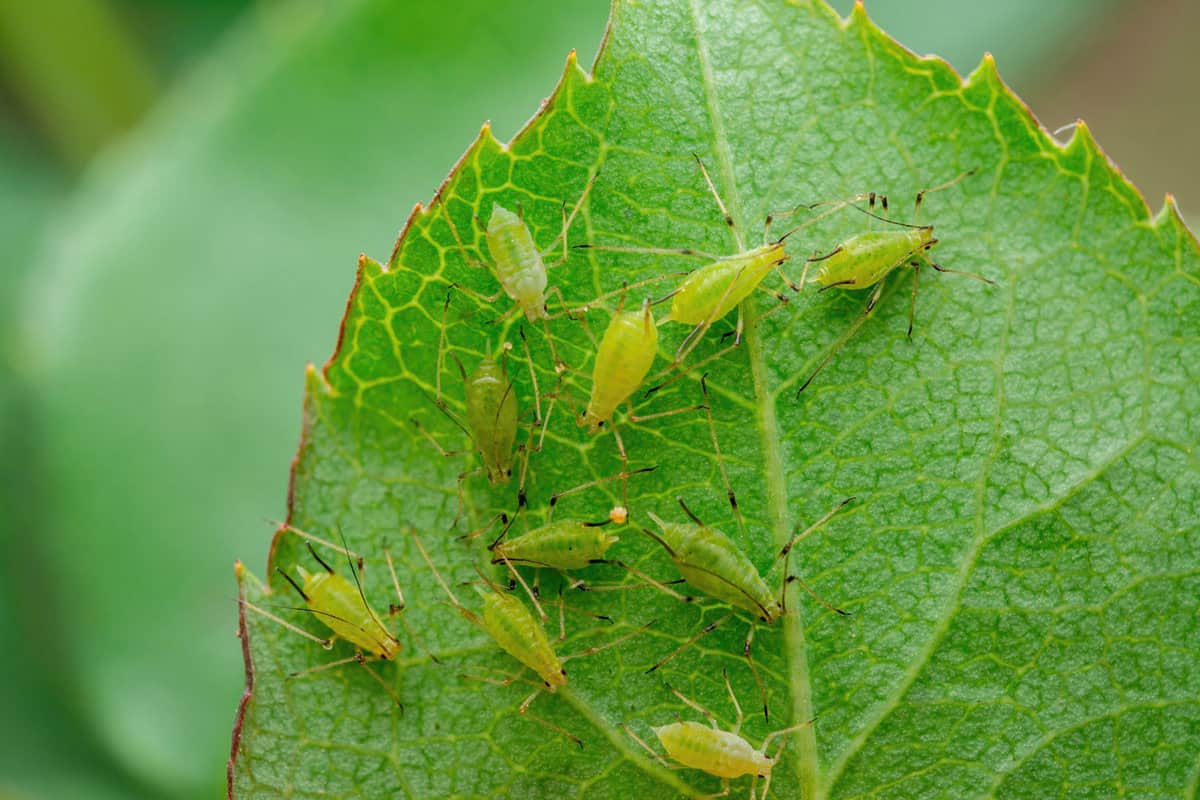 No, aphids are not a type of leaf beetle. They are not even a beetle at all! To accurately identify the differences, let's first look at these insects' phylogeny. Both aphids and leaf beetles are in the Insecta class, in case that wasn't obvious.

The difference begins in their order, which is one specification lower than the class. Beetles are in the Coleoptera order, and leaf beetles are a family within that order. Aphids, on the other hand, are part of the Aphididae family of the Hemiptera order.

Fun fact! The Hemiptera order is commonly known as the True Bug order.

Other genera in the Aphididae family include pentalonia, hyadaphis, and myzus. While closely related to aphids, they are not quite the same. They can be found in Southwest Asia, Central Asia, and North America.

If aphids invade your garden, one useful trick is to introduce ladybugs to the area. Ladybugs are incredible, dedicated aphid murderers. 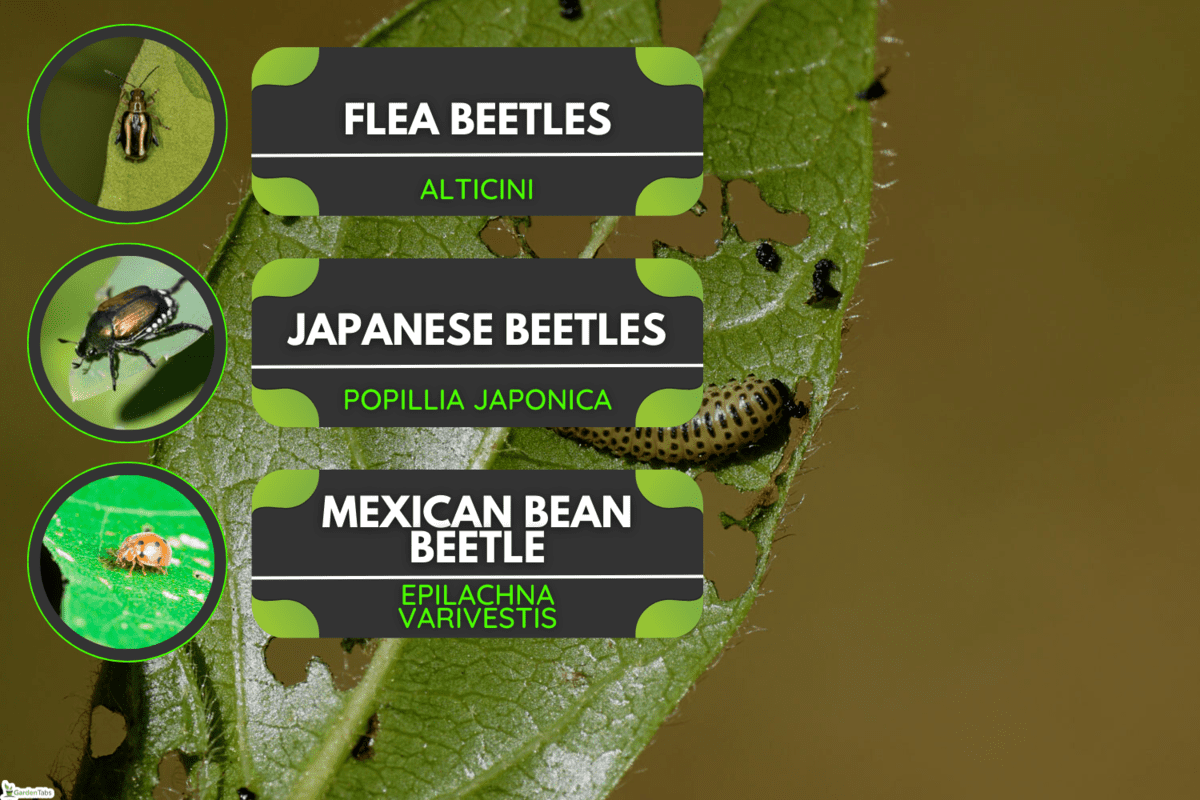 Flea beetles are common insects that jump from leaf to leaf. It is no surprise that they are part of the leaf beetle family.

According to the University of Florida's Institute of Food and Agricultural Sciences, flea beetles have 11 segments in their antennae. This is particularly astonishing because these bugs are less than 9 millimeters in size.

Japanese beetles are ranked to be one of the most destructive beetles out there. In Japan, Japanese beetle populations are controlled naturally by predators [such as birds, skunks, and moles].

Rather than targeting leaves, these beetles focus on grass and roots. The signs of a Japanese beetle infestation include brown patches of grass and excessive digging by small predatory mammals.

For more information on Japanese beetles, read our post here: Where Do Japanese Beetles Go At Night? [And How To Keep Them Away] 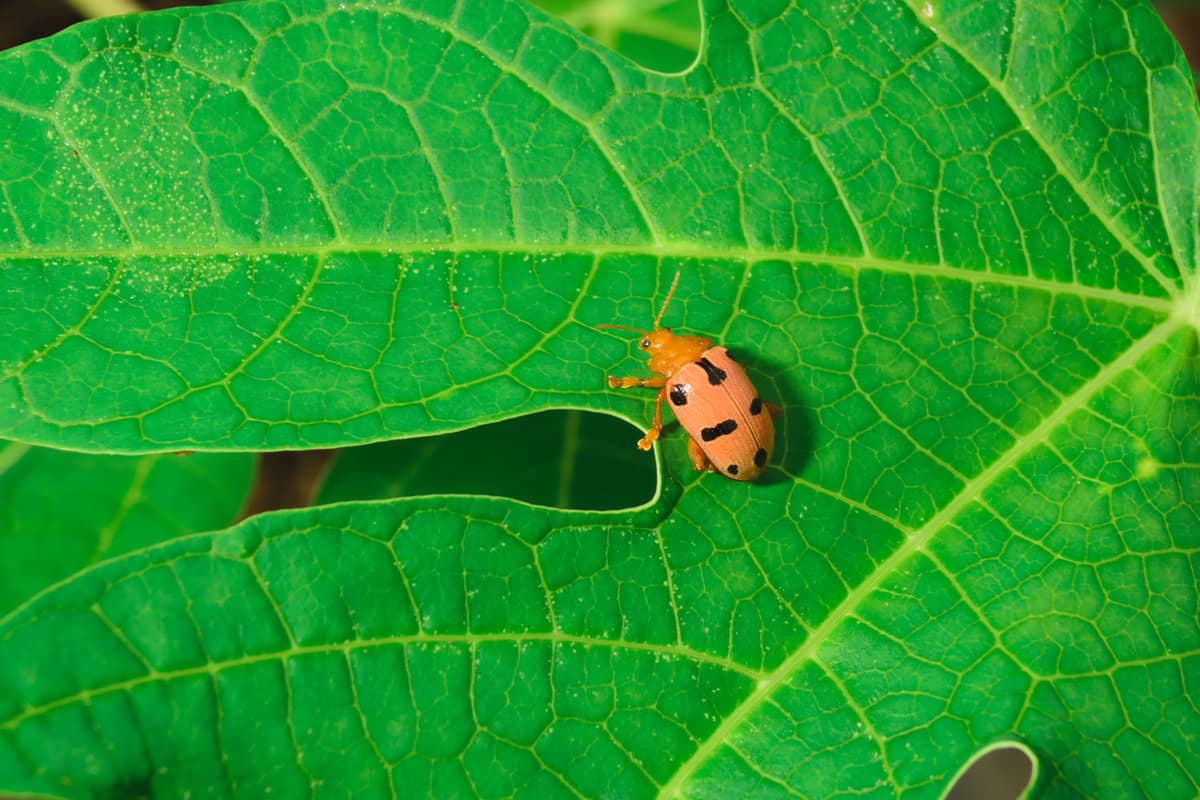 The Mexican bean beetle is native to Mexico and all of North America. There is a variety of bean plants that this insect targets, including soybeans, lima beans, and mung beans.

Typically these beetles will focus on the leaves and stems of the bean plants, although it is not unheard of for them to pick at the fruiting bodies.

One important suggestion for repelling pests is using a trap crop. The best trap crops for beetles include radishes, nasturtiums, and blue hubbard squash.

What Is A Trap Crop?

A trap crop is exactly as it sounds - a crop used to attract and trap pests, guiding them away from the main crop. Alternatively, poisonous trap crops can also be used as a barrier protecting the main field.

This solution is typically used by agricultural farmers that are opposed to pesticides. Although, at times, the trap crop is also used for profit [a cash crop]. In these instances, pesticides may be applied only to the trap crop. 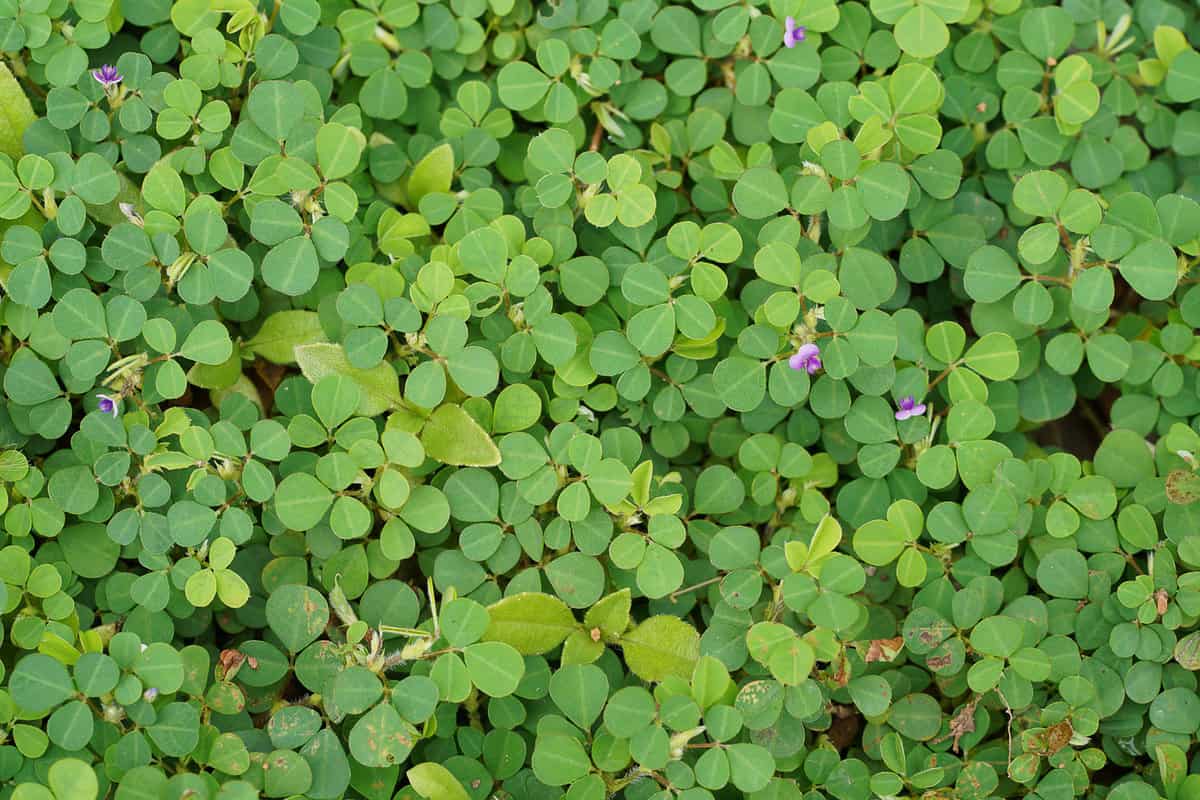 Within trap cropping is a method called push-pull agriculture. Essentially, farmers use both repelling and attracting plants in between rows of crops.

A very popular push crop is the Desmodium genus of legumes. There are some plants with odd names within this genus, such as the panicledleaf ticktresoil or the desmodium sweetheart. They are special candidates for push crops because they can emit chemicals that repel stemborer moths. 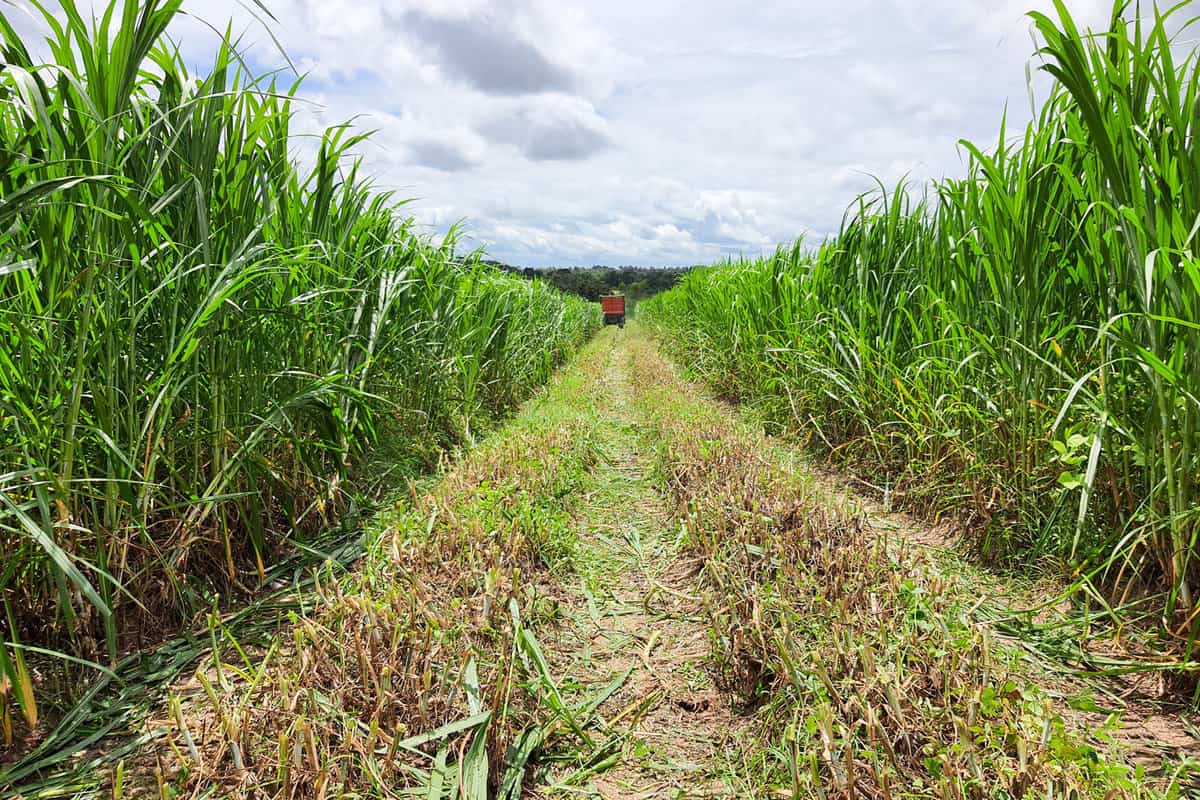 The pull crops are meant to distract pests from the main garden. Many types of grass attract insects, like Napier grass and signal grass. These two, in particular, release volatile compounds that many pests can detect.

Napier grass, sometimes called elephant grass, especially traps eggs and larvae because it will produce a sticky substance once it realizes it is being eaten. As a result, the majority of the larvae die on the host plant.

For specific information on planting grass, check out this related post: How To Rake In Grass Seed? [Step By Step Guide]

Let us recap as our post concludes. Viburnum beetles are leaf beetles that feast only on the viburnum plant. Other leaf beetles also attack host plants specific to their species' names.

There are many methods to remove pests, although not every way is equally kind to the environment.

If you found this post useful, be sure to read a few of our other articles below.

Can I Mix Fungicide And Insecticide? Are They Compatible?