Native to Asia and North America, poison ivy has found its way into our backyards and gardens. Known to cause irritation, people find it necessary to rid the plants from their lawns. When is the best time to actually do the task? Does poison ivy die back in the winter? We have researched the question, and here is what we’ve found.

Poison ivy does not die in the winter. Instead, the plant enters a dormancy period. During this time, urushiol, the oily sap on the plant's leaves, is still present on the surface. Poison ivy can cause allergic reactions upon contact with the skin, even during winter.

So if you want to remove the plant, do so in the winter after the leaves fall off. And do not forget to wear protective gear. Read on and find out how you can identify poison ivy, its symptoms and treatment, and other species you need to watch out for.

Urushiol: A Scratch Is In Our Midst

Urushiol is an organic compound and a known allergen produced by plants classified under the genus Toxicodendron or poison tree. It is a light yellow oily substance, which is found covering all plant parts within this genus and can last for months and even years.

Although it is not known to affect wildlife, urushiol causes human skin irritation. In severe cases, rashes develop into blisters. How exactly does the compound react with our bodies?

It is important to note that any foreign matter that comes in contact with the skin can be regarded as a potential microbe or bacteria. As a response, the body's immune system attacks these foreign invaders as a way to protect our body.

Once urushiol touches the skin, the compound is absorbed by proteins present in skin cells, resulting in the cells changing shape and form. The immune system does not recognize these healthy cells and attacks them as if they were foreign matter. Skin tissues break, causing inflammation, pain, blistering, and itching.

How Do You Identify And Avoid Poison Ivy? 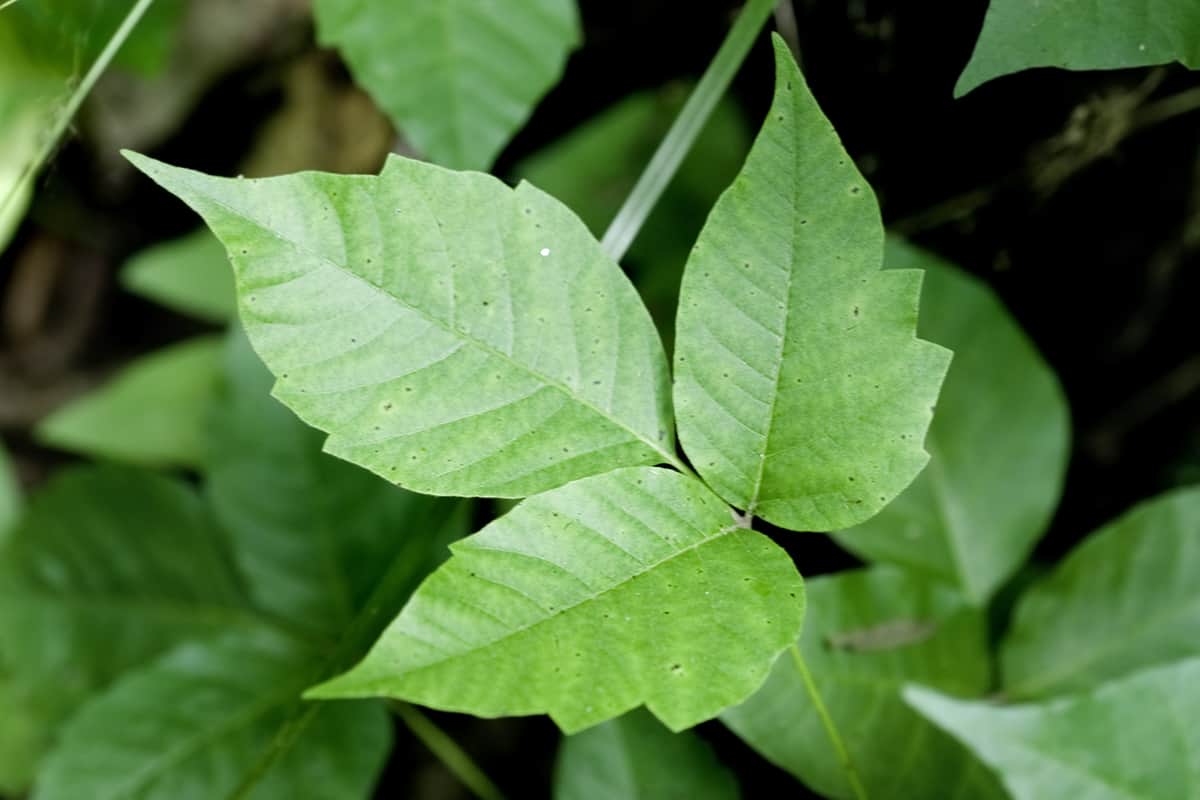 Poison ivy can cause considerable harm to people and is poisonous all year round no matter the appearance. The section includes information as to how you could identify as well as avoid the plant.

Poison ivy has two distinct growth characteristics – trailing vine and shrub. In the eastern part of the states, the plant grows as a climbing vine and is mostly seen in the south, Midwest, and east. On the other hand, western poison ivy develops as a shrub.

Both feature three-pointed leaf clusters with a glossy surface, the edge of the leaves may either be smooth or serrated. 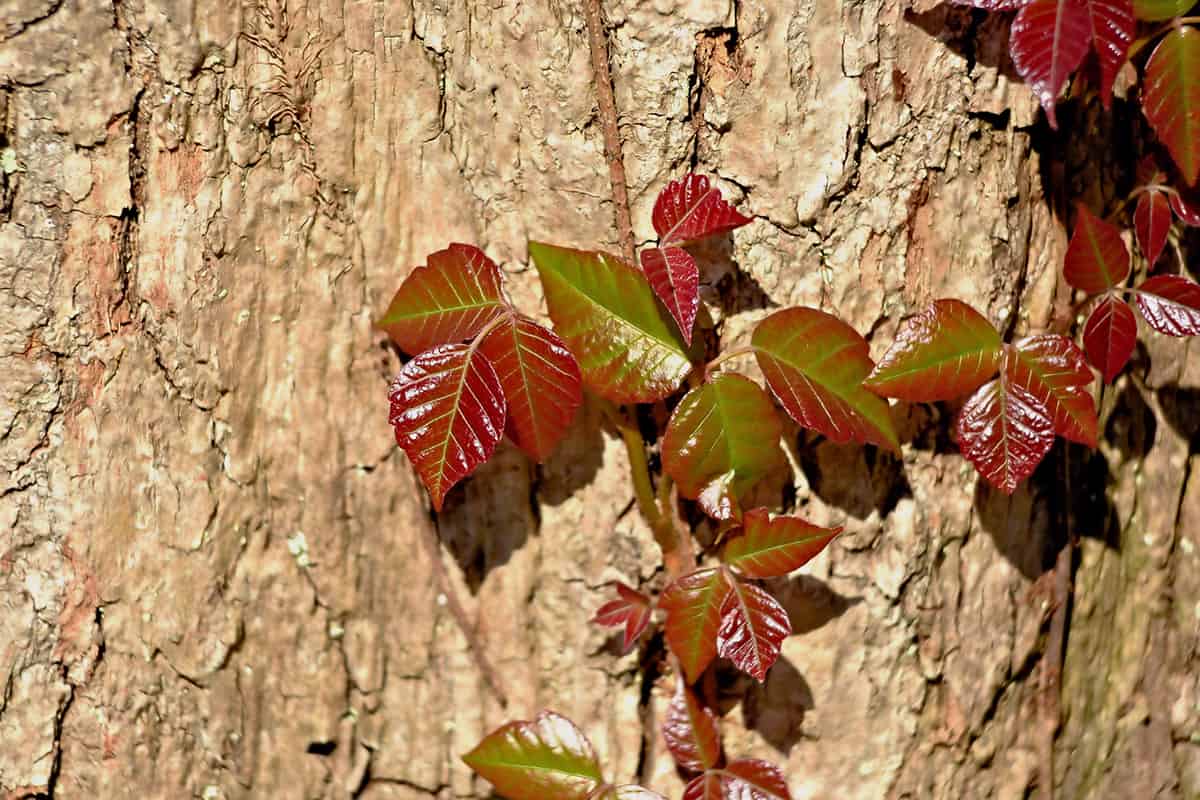 You can recognize poison ivy by looking at its leaves, berries, and aerial roots. However, the color of the foliage changes throughout the seasons.

In the spring, as the plant begins producing white blooms, leaves appear red or a mixture of red and green. During the summer, the foliage matures and turns green while new leaf growth still emerges as red.

As fall approaches, the plant exhibits a spectacular show, with its leaves turning vibrant colors of red, orange, or yellow.

During winter, when the leaves of the ivy fall, you can identify the plant through thin, hair-like structures that develop above ground, clinging through trees and nearby structures. These are aerial roots present in more mature vines that also contain the oil and produce the same symptoms.

What Part Of Poison Ivy Is Poisonous?

All parts of the plant – stem, leaves, and roots – are covered with urushiol and are considered poisonous; that’s why it is important to avoid the plant at all costs.

Once you have come in contact with urushiol, you will exhibit symptoms of infection. The transmission does not have to be direct.

Indirect contact with the substance causes skin irritation. If a portion of the oil sticks onto any part of your clothing, bag, or similar items, your skin will develop rashes or blisters upon contact with the said belongings. You should immediately wash the items with detergent and dish soap.

Furthermore, the harmful effects of urushiol could be transmitted through the air only if any parts of the poison ivy are burnt. If the smoke is inhaled, it causes respiratory and eye irritation.

What Are The Symptoms Of Ivy Poisoning?

The allergic reaction caused by poison ivy is medically referred to as contact dermatitis, a condition that occurs when the skin is exposed to any irritant.

The initial symptom is itching, followed by red rashes and, eventually, blistering. It may take several hours to a few days before any signs of exposure appear, but the reaction can last for two to three weeks.

The severity and duration of the symptoms depend on the amount of urushiol you are exposed to. Different body parts absorb the oil at varying rates; the usual reaction site involves the hands and arms.

The rash itself is not contagious and only occurs where the plant oil has contact with the skin. Contrary to common notion, a person with poison ivy can't spread it on the rest of the body by scratching but it can cause the existing condition to worsen. Coming in contact with the rash of an inflicted individual will not result in any reaction.

However, it is worthy to note that the plant oil, urushiol, can linger for months or even years in items such as clothing, shoes, garden tools, and virtually any surface that have come in contact with the plant.

Eye irritation and respiratory problems can occur when the plant is burnt and a person is exposed to the fumes.

How Do You Treat Poison Ivy Rash?

Most home remedies can treat mild cases like cold compresses, hydrocortisone cream, calamine lotion, or a mixture of baking soda and water. Taking a mild over-the-counter antihistamine is relatively safe and will help relieve the symptoms.

It is important to control the itch since scratching will worsen the inflammation and could cause the skin to break. At this point, the afflicted individual becomes susceptible to bacterial infection.

More severe afflictions may require medical consultation, especially in children and the elderly. If the rashes cover most parts of the body, the doctor will prescribe a corticosteroid, an anti-inflammatory cream, to reduce itching and inflammation.

How Do You Remove Poison Ivy?

Poison ivy growing in your yard or garden poses a threat, especially to children and anyone that may be exposed to it. That being said, you should remove the plant immediately before it invades your property.

Here are simple methods you can use to remove the plant completely from your yard.

What you need to do is to find the main stem that connects all branches and cut it off using garden shears, sickle, or knife.

Let the upper portions wilt and completely die back before manually removing them. If the plant has already developed aerial roots, you may have to pull them off immediately.

Apparently, you should not disregard the lower section because the root system is still thriving – new shoots will eventually grow.

Simply dissolve a cup of salt in a gallon of water mixed with a tablespoon of dish soap. Spray the solution directly on the plant’s base and be careful of nearby vegetation because the mixture can still harm other growths.

Once the roots absorb the solution, sodium chloride will suck up the liquid inside the plant, disrupting its water balance and eventually killing it. Reapplication is necessary for efficiency. 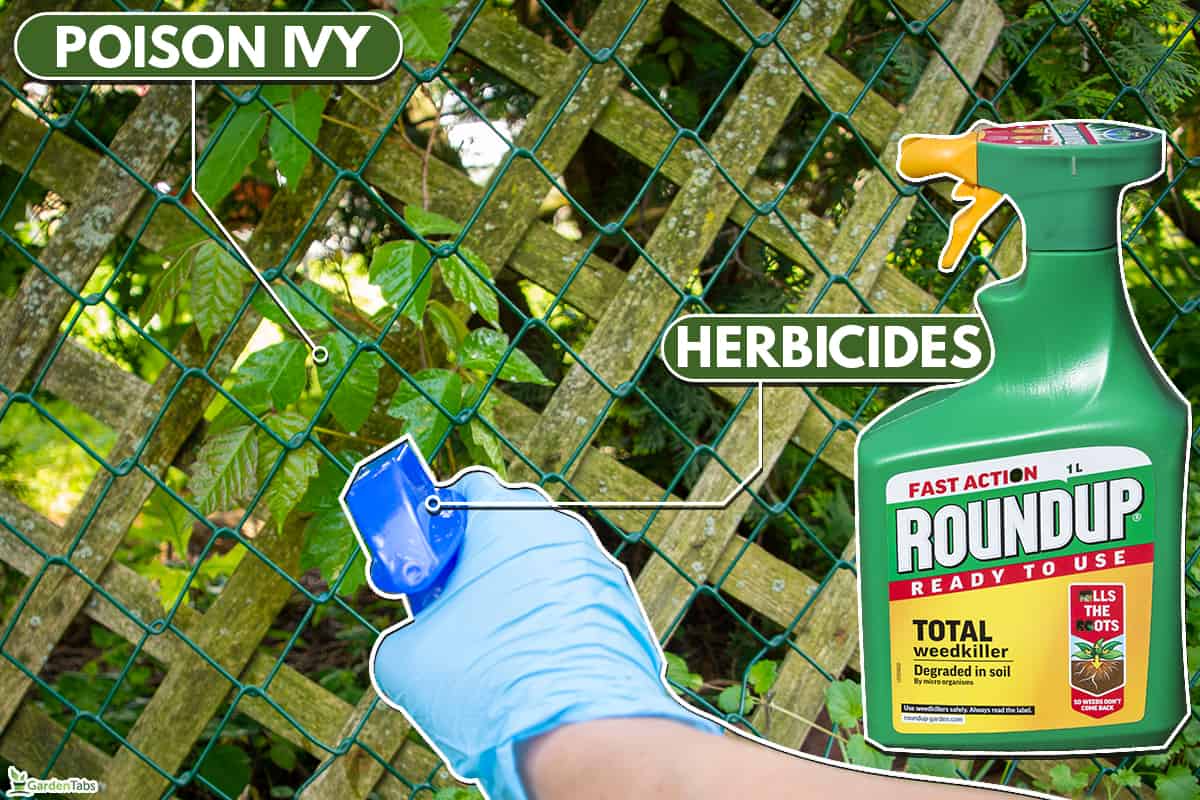 Herbicides are very effective in killing poison ivies permanently. However, some products pose a serious threat to your health as well as the environment if not used properly.

Use a solution with triclopyr (slightly toxic to birds) as its active ingredient. Be careful when applying the product and follow the safety measures and instructions indicated on the label.

What Other Plants Cause Similar Effects To Poison Ivy Plant?

Poison sumac and poison oak belong to the same genus – Toxicodendron. The species classified under the genus produce urushiol and exhibit the same effect, which is why you should not come in contact with the said plants.

Their foliage has similar physical attributes as that of the poison ivy – three leaves form into clusters. Poison oak develops a more serrated leaf blade than sumac and ivy. Either way, remember to steer clear of these plants.

Does Poison Ivy Affect Everyone?

Statistics reveal that about 85 percent of the American population is allergic to poison ivy. They develop relatively mild symptoms like itching, rashes, and swelling.

Of those who are susceptible to affliction, 10 to 15 percent exhibit severe reactions, which, apart from the usual signs, may include blistering and open wounds. 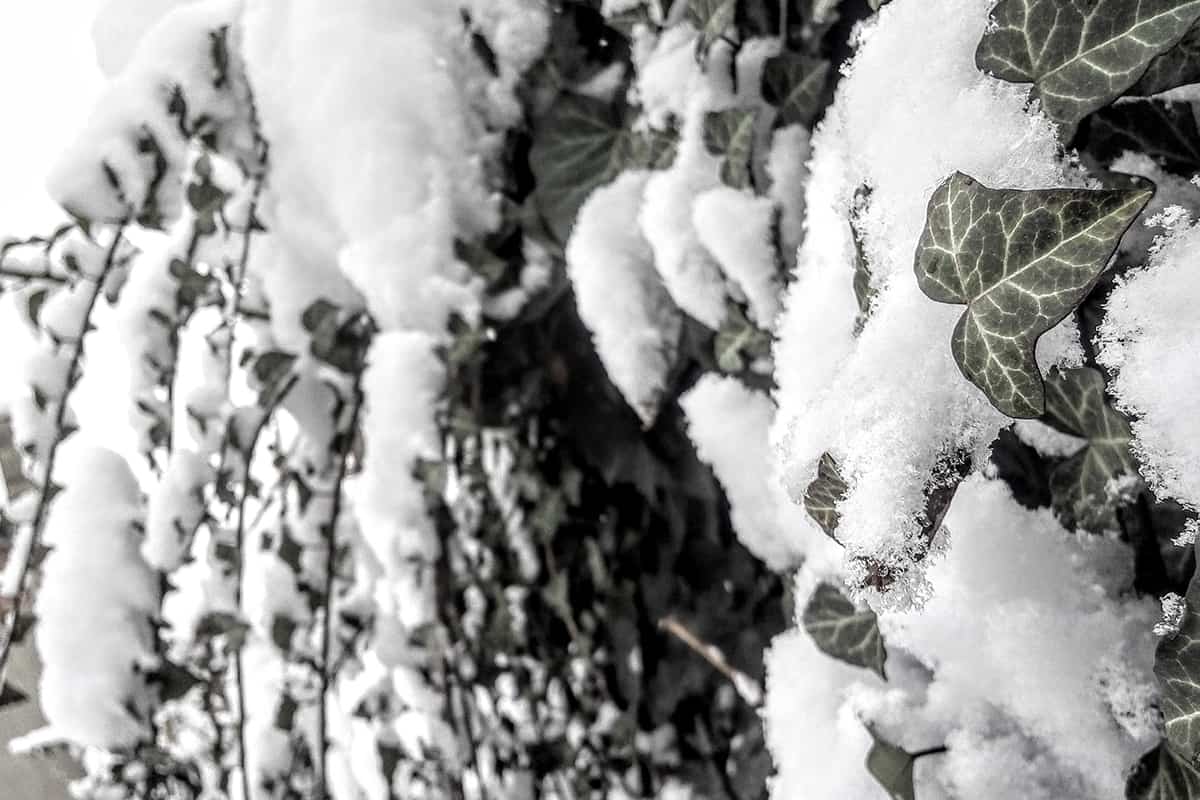 Poison ivy may be dormant in the winter, yet it is still poisonous all-year round. If you happen to come in contact with the plant, don’t panic; wash your skin and apply the necessary treatment. If you haven’t, lucky you! It is best to steer clear of the plant and remember! “Leaves of three, leave them be.”

Is Tenacity Herbicide Safe For Pets?