In contrast to most other fungi, Chaga begins to develop from within the wood rather than on the tree's exterior, and as it ages, it emerges from the tree. Chaga has black skin that resembles something that has been burned, and its interior is brown or deep orange with a rugged outer feel.

Does Chaga, however, grow on fir trees? Well, we have the answers below, so keep reading!

No, Chaga does not develop on fir trees. The white and yellow birch trees' exteriors are where such fungi thrive. However, there are instances where Chaga is claimed to thrive on beech, poplar, alder, oak, and maple trees.

Despite being a fungus and belonging to a similar species as mushrooms, Chaga does not look like a regular mushroom. Instead, it is a parasite that thrives on some hardwood trees, primarily the stems of birch trees. Read ahead to learn more about Chaga and the types of trees they grow on.

What Trees Will Chaga Grow On? 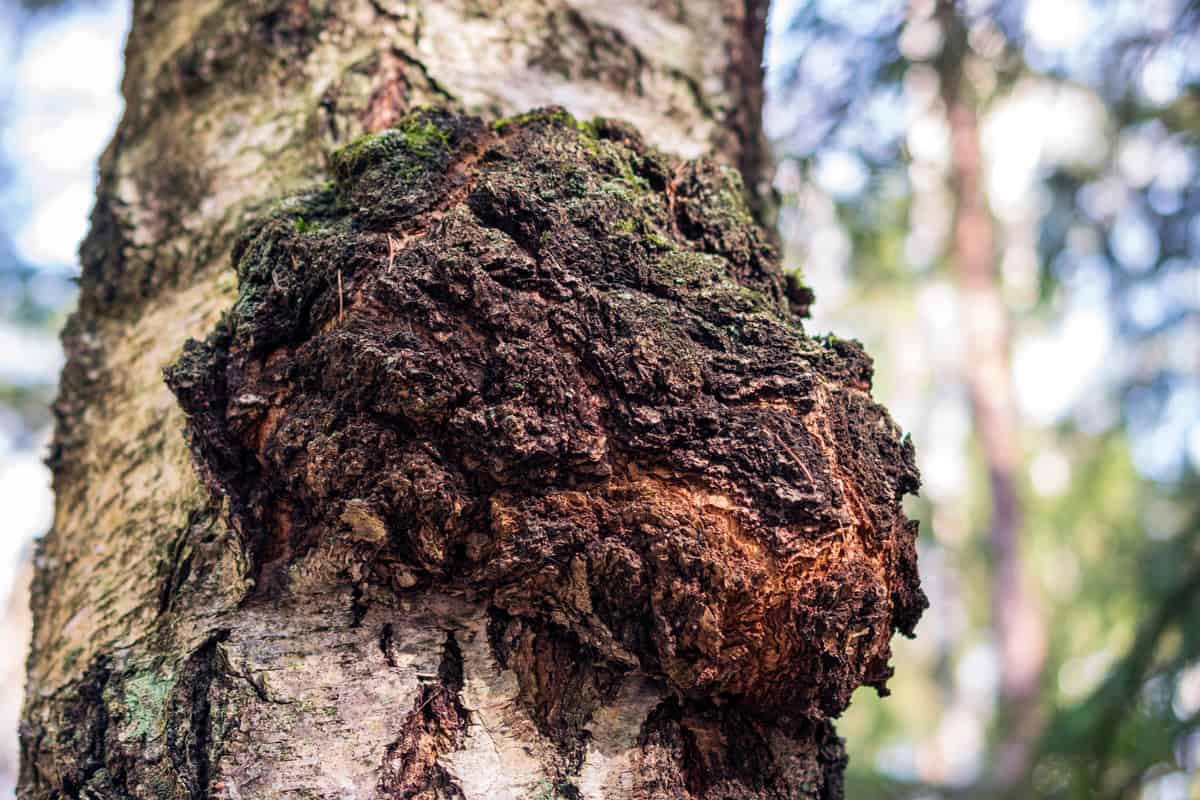 Environmentally, the parasitic known as Chaga develops on the trunks of hardwood trees in cold environments. Therefore, Chaga does not develop randomly or on randomly chosen trees.

The woody tree to which Chaga thrives is specific. Although birch trees are primary hosts of Chaga, numerous species of trees also support it, including: 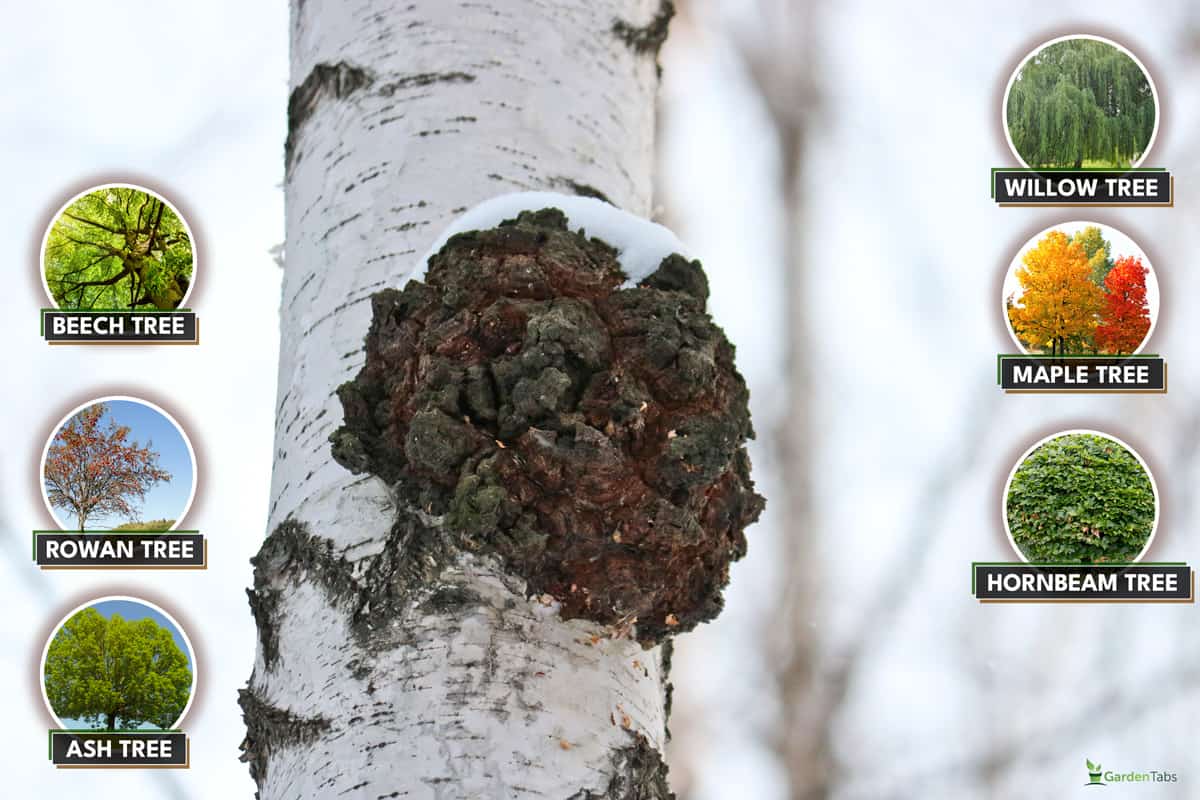 Where Does Chaga Grow?

The best places to look for Chaga are typically in northern areas. Siberia, Canada, Russia, and northeast China are a few places Chaga can be found.

Additionally, this kind of mushroom can be found throughout the northern regions of both the United States and Europe.

Finland, though, is a place where Chaga is a prolific plant. It is one of the pioneering nations to attempt inoculating birch trees to promote the mushroom for the Chaga collection.

How Does Chaga Grow 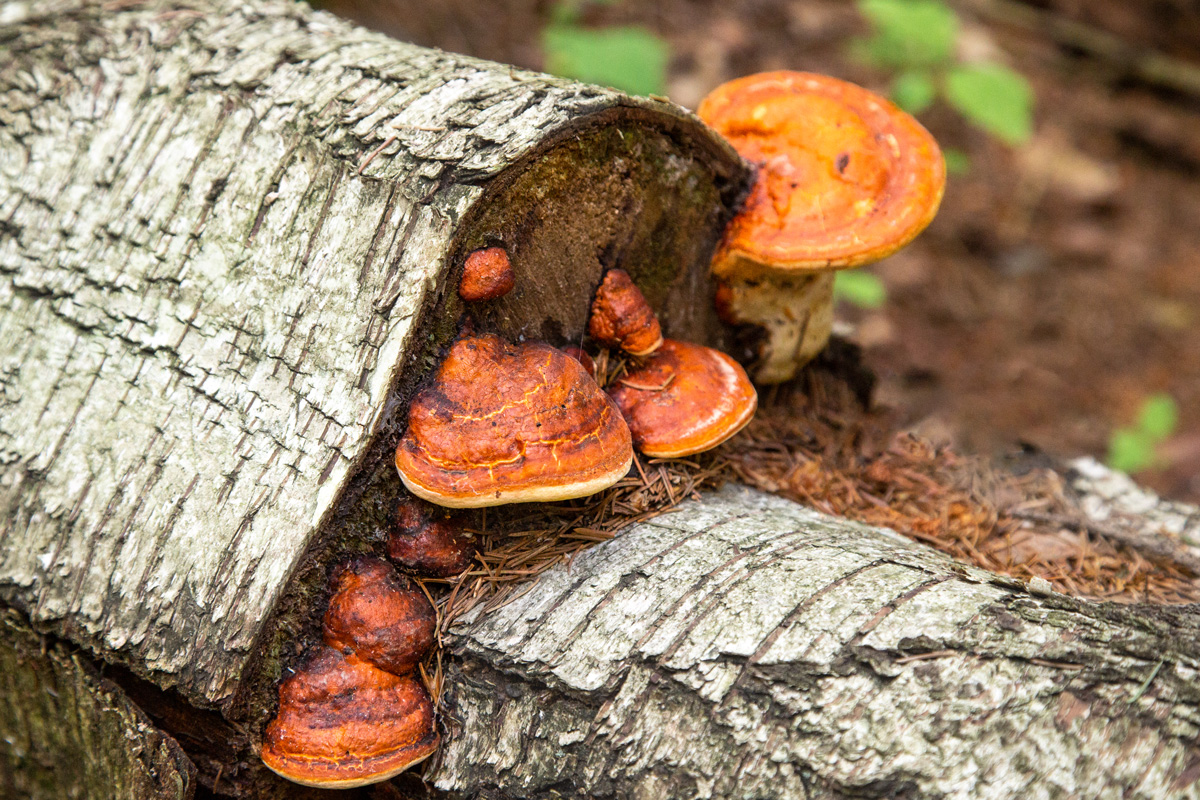 Chaga develops on living trees. This indicates that such fungal mycelium reaches the stems of an established tree through a crack or fracture at the bark and begins to take up or produce beneficial chemicals.

Birch trees contain betulinic acid and antioxidants, which are two elements that give Chaga its significant health advantages. As the tree's flesh continues to degrade or weaken, the fungus will consume it until it reaches its decomposition stage.

This is also known as "trunk fracture."

The tree gradually becomes damaged from the inside out by the fungi. When the conk can be seen breaching the tree's exterior, you can tell the tree is infested with Chaga.

Conk grows best when it protrudes from the tree's side.

What Are Chaga's Stages Of Development

The different development stages of Chaga. Let's discuss them below:

Most Chaga develops on wood fiber and includes lignin, a nutrient-rich substance obtained from the host plants like oak, birch, and walnut, among others, to hold numerous nutrients.

In most cases, 20 years pass before a tree becomes infected or dies.

What Does Chaga Look Like? How Do I Identify Them?

Searching for birch trees that thrive in the right area constitutes the first way to identify Chaga mushrooms. A Chaga mushroom's appearance on the trunk of a tree is best described as resembling a sizable piece of burned charcoal.

Then, you should keep an eye out for a rough-appearing, blackened bulk projecting from such a birch tree's trunk, which usually has a domed or conical appearance.

There is a softer orange core inside. Because there is a lot of melanin within the outermost surface, Chaga has a rich black coloration.

The skin of humans contains melanin, the pigment that causes individuals to tan in the sun. Chaga is very much an orange tint when it initially appears from such a tree trunk.

Exposure to sunshine causes it to turn a dark brown gradually with age.

Instead of the mycelium being concealed as it is with other fungi, Chaga's sporophyte is visible. An accumulation of mycelium known as a sclerotium makes up the enormous bulk you can observe on the tree's exterior.

A Chaga mushroom's fruiting bodies, which are seldom seen, are located within the host tree.

Other Things To Consider With Chaga

Inexperienced eyes may mistake Burls for Chaga. But unlike Burl, Chaga has a few characteristics that set it apart. Chaga has a rough, burnt, and blackened exterior, yet it has a smoother interior that is orange or gold.

One of the most noticeable differences between a Chaga and a Burl is that the interior looks mellow amber. Additionally, there is a significant possibility that it may not be Chaga if the amorphous mass in issue is developing on a tree other than a birch tree.

An outgrowth on a tree's bark that is a component of the tree is known as a burl. Burls upon woods apart from birch can resemble Chaga, but unfortunately, there still are clear distinctions.

A burl will then be noticeably darker or nearer to the true appearance of the bark. It would be nearly the same hue both inside and out after removal.

Chaga has a distinctive orange hue and a somewhat unusual, cork-like feel from the tree as well as the outer layer of the mushroom.

What Are Chaga Mushrooms' Health Advantages 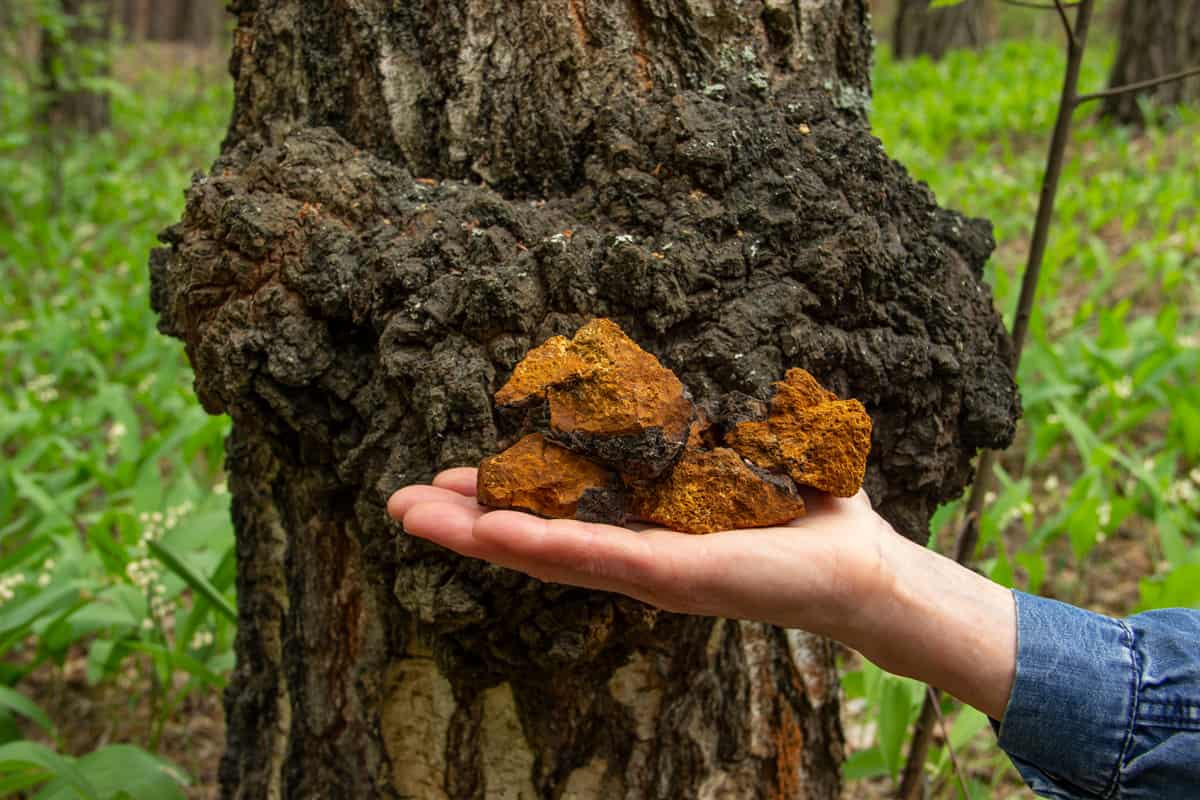 According to studies, Chaga may offer a variety of health advantages in addition to promoting general body equilibrium. The first time you come across Chaga mushrooms in the woods, you probably do not have high expectations.

This common fungus seeps out of birth trees, appearing as charcoal, and is occasionally mistaken for disease because it is ordinary and unattractive.

The Chaga mushrooms, though, offer a staggering number of health advantages. Continue reading to find out how Chaga can strengthen your inflammatory response, safeguard your genetics, and provide many other benefits.

According to research, Chaga mushroom extracts contain anti-inflammatory qualities that can aid with a variety of illnesses. Chaga reduces inflammation by modulating cytokine secretion.

This may then aid in the battle against autoimmune disorders.

Chaga mushrooms have several intriguing advantages, one of which is their capacity to alter immune function. This suggests that Chaga can soothe the immune function and lessen the reaction whenever it is overwhelming.

It is because of this ability of the mushroom to aid in easing allergy symptoms that Chaga has been prescribed to cure autoimmune diseases.

Chaga works as an antioxidant that may help lower harmful cholesterol. Reducing the likelihood of heart ailments is good for health. Additionally, Chaga may be used to combat hyperglycemia or diabetes.

According to research, Chaga can reduce levels of blood sugar.

Traditional medicine has employed Chaga extracts to relieve symptoms, including cancer. According to laboratory tests, Chaga extracts are efficient against cancerous cells in humans and animals.

The capability of the Chaga extract to shield DNA molecules from free radical harm has been demonstrated.

How To Prepare Chaga Tea 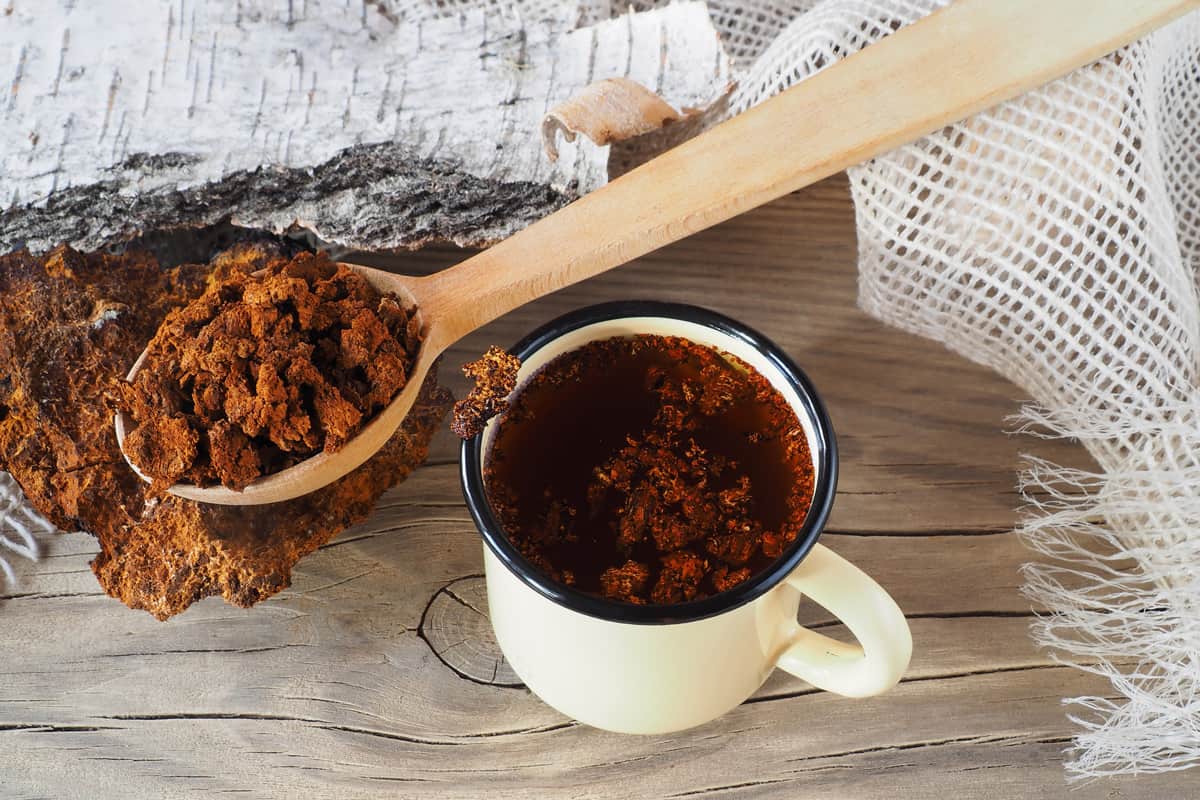 There are two primary types of Chaga tea, chunks and pulverized tea bags. Even though the Chaga mushrooms in tea bags aren't relatively as fresh as they could be, they create Chaga tea considerably faster than chunks.

The time your tea seeps increases with the size of the Chaga chunks utilized. But whichever approach you choose, the goal is to go low and gradual, particularly if you want to get the most therapeutic benefits out of the Chaga chunks.

View these Chaga chunks on Amazon.

See this powdered Chaga on Amazon.

Fir trees don't support the growth of Chaga. Such fungi are found outside the white and yellow birch trees. It has been asserted that Chaga can grow on other trees such as maple, alder, poplar, oak, and beech.

And while we have your attention, check out these helpful related articles:

Is Fir Tree Sap Poisonous? [Is This Tree Safe For Your Yard?]

Do You Need Vermiculite To Grow Mushroom?