Holly bushes conjure up images of Christmas; they have become a symbol of the holiday season with their green leaves and bright red berries. Holly bushes require very little maintenance once established and add pops of color during the dull winter months. Although these hearty plants are pretty, people often wonder, do holly bushes have deep roots, and are they invasive? For your convenience, we have brought you the answer.

Holly bushes have very deep, strong roots. They grow between 17 - 25 inches below the dirt. The root system is a taproot. This means holly bushes have one large root that grows straight down and then smaller, less hearty roots that spread out.  The horizontal roots are responsible for gathering the majority of the nutrients needed to flourish. This type of root system can be invasive.

The holly bush is a bit complex, but it is very possible to have a good planting experience. In the following, we will discuss the holly bush in more detail, including what makes the root system so invasive. So be sure to keep reading. 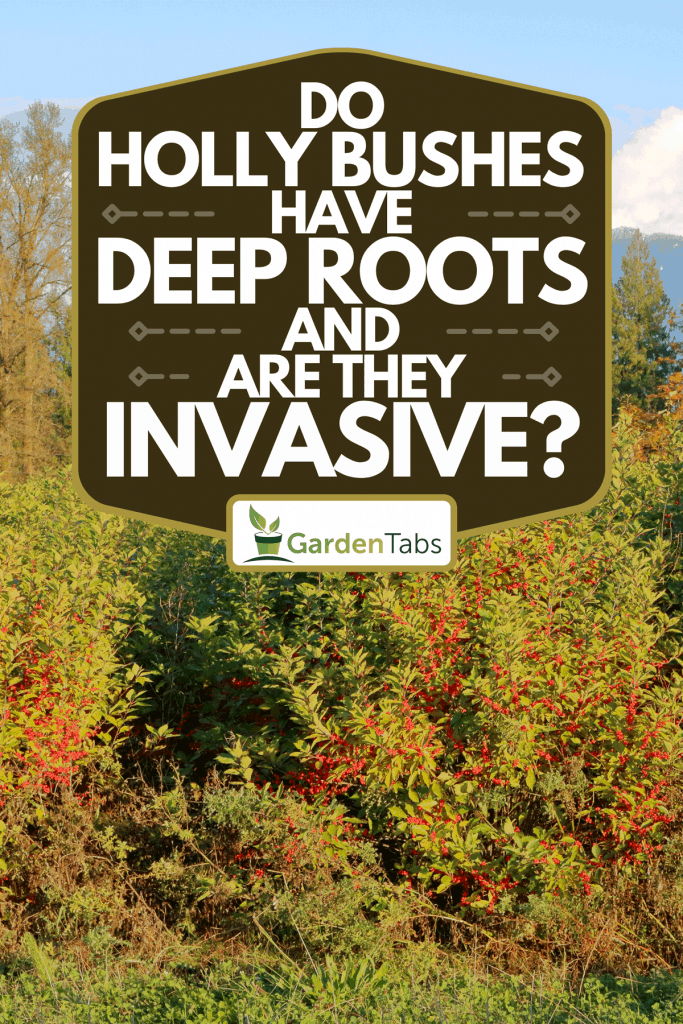 All About Holly Bushes

Holly bushes are usually chosen for their pretty berries and robustness. These bushes are primarily evergreen (though there are some deciduous varieties). After the first year, they need very little care; weekly watering through the summer and annual pruning. Pruning keeps the plants looking nice and not taking over will keep hollies healthy.

It is ideal to plant holly bushes on the outer areas (along the fence line) of a garden, to ensure that the root systems will not affect house foundations or pipe systems.

If choosing to plant holly bushes, it is important to know that most varieties of the plant are dioecious. This means that in order for berries to form, there must be a male and a female plant planted between 50 and 200 feet of each other. As a result, you must plant more than one holly bush for the plant to produce berries. Since more than one plant is required for pollination, there is more potential for very deep and invasive root systems.

It is important to fully understand the root system of the holly bush in order to have a successful experience with the plants. 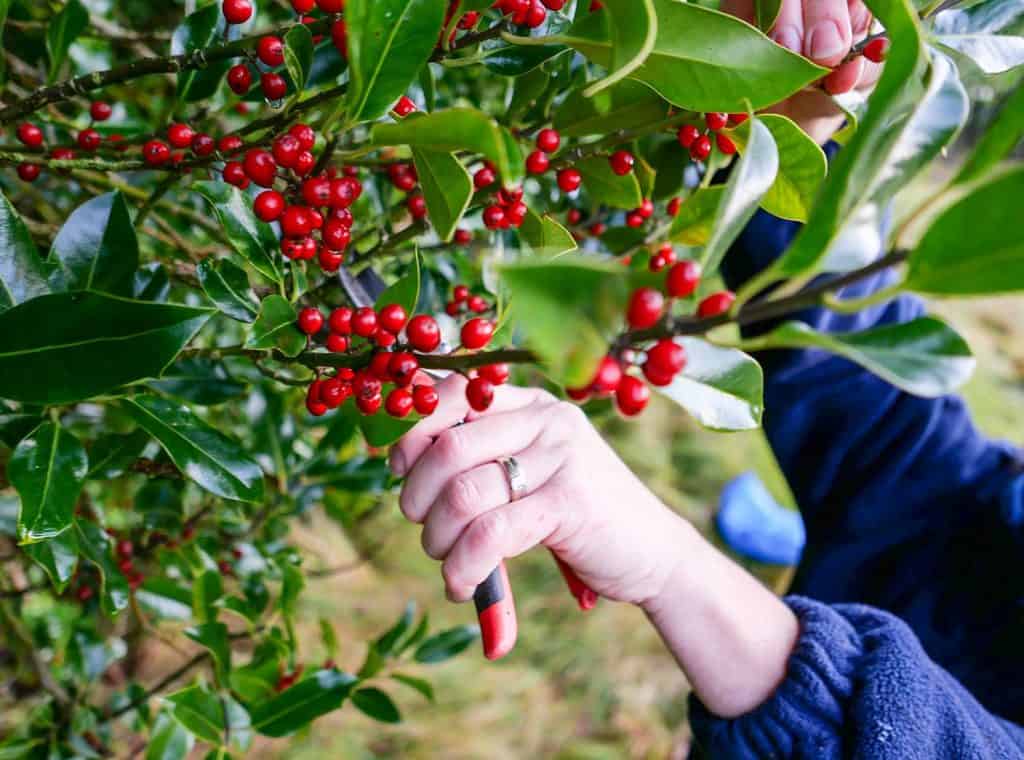 The term "invasive root systems" can have several meanings. The following definitions will help you to understand just how invasive holly bush roots can be:

Holly bushes, if left unkept or planted too close to a foundation, can do all of these things. The root system is very strong and can cause holes in underground piping, move home foundations, take over a garden, and continually grow back if not removed properly.

The root system of the holly does take years to become invasive. Newly sown plants traditionally do not flower or form berries until sometime between years three and five. The roots must get deep and established before flowering.

Holly bush roots can be aggressive. Because of the structure of the root system, the main stem of the roots is very strong and the roots that grow out are prolific. There is potential for the roots to take over and continually grow suckers that will spread out and take over a garden. If roots are left during removal, the holly bush has the potential to regrow.

Can You Plant Holly Bushes Near A House? 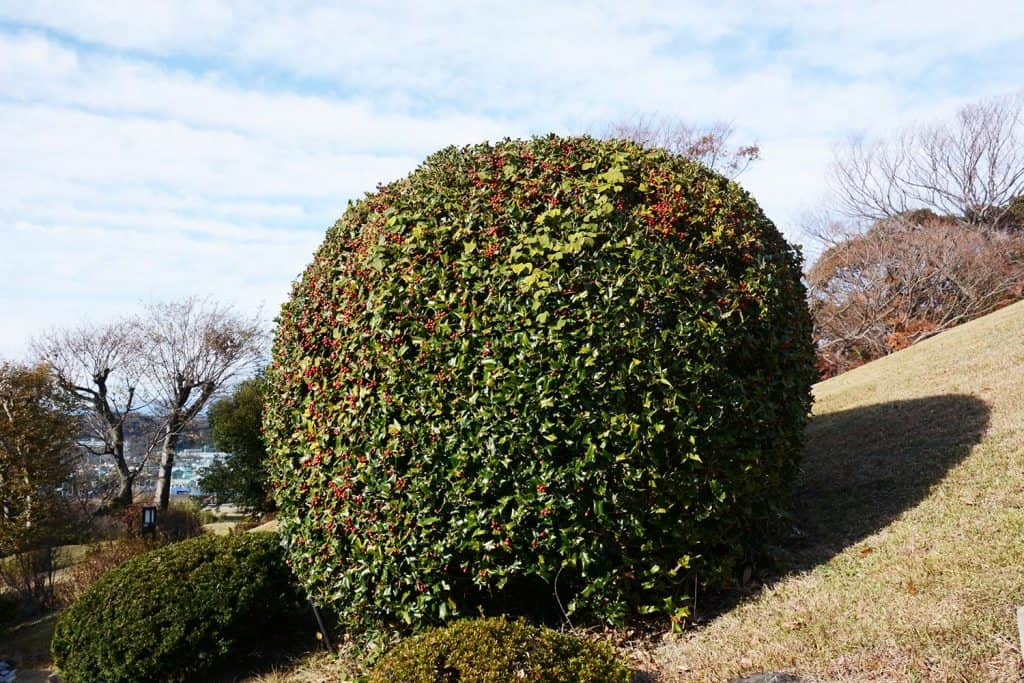 Holly bushes are best planted at a minimum of two feet from a house. Due to the potential invasiveness of the plants, they should be planted on the outskirts of the yard. On average, they can grow between 3 and 16 feet tall. There are dwarf species that do not get as large. However, given enough time, all holly bush root systems are strong and can be detrimental to foundations if planted too close to the home.

Click here for an example and specifications for a dwarf holly bush.

Will Holly Bushes Grow Back If Cut Down?

Holly bushes are very hearty and even if they're completely cut down, they can still grow back. It is imperative during removal that as many of the roots are eradicated as possible; it is not enough to just cut the plant off at the base and leave the root system. Proper removal of the plant will safeguard that the roots will not regrow.

Check out the following article, which speaks to the true heartiness of holly: How To Grow Holly From Cuttings [Holly Propagation Guide].

How Do You Get Rid Of Invasive Holly?

Sometimes it is necessary to remove an unwanted bush. Due to the deep root system on a holly bush, there are specific steps to take to properly remove it. Here are the best steps in removing holly:

If the bush has become too large and the root system seems to be beyond manual removal, there is also the option to contact your local tree removal professional. These contractors have the proper knowledge, tools, and experience to remove invasive bushes and trees. Be sure to hire a contractor that will guarantee the work performed, and is licensed and insured.

Holly bushes are a pretty way to add year-long greenery to your garden. Maintenance is minimal and they will grow if planted properly. On the other hand, it is important to keep in mind that holly bushes are best planted around the perimeter of the yard, away from pipes and foundations. If planted too close to the home, the invasive nature of the root system can wreak havoc on your home and garden.

If you find yourself in need to remove unwanted plants, take the necessary precautions to do so properly, or the holly bush will keep coming back.

Before you go, check out these other posts about hollies:

How And When To Prune A Holly Bush