Vegetable gardens are a great way to make use of your backyard to grow organic produce. Beans are a popular choice since they can be prepared and enjoyed in several ways. However, some species need a trellis for support. We have researched everything about garden beans for you, and here is what we’ve learned about growing beans on a trellis.

You can plant a wide variety of beans in your garden, and they are generally categorized based on how they grow. Bush beans develop close to the ground and do not require any form of support to thrive. Pole or runner beans need a trellis since they grow tall on climbing vines.

In this article, we will talk about the two classifications of garden beans- pole and bush varieties - to help you understand which cultivar requires a trellis, and to know the ways on how to take care of them. Read on and find out more about these garden beans! 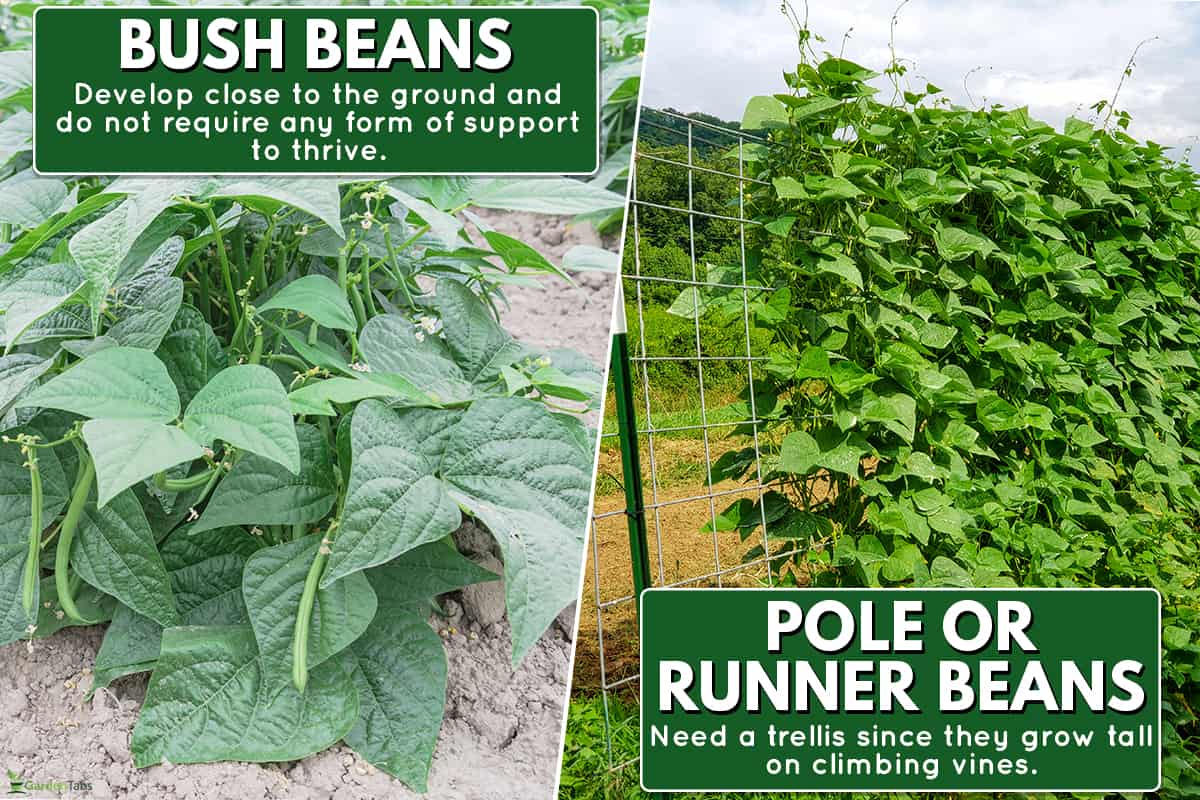 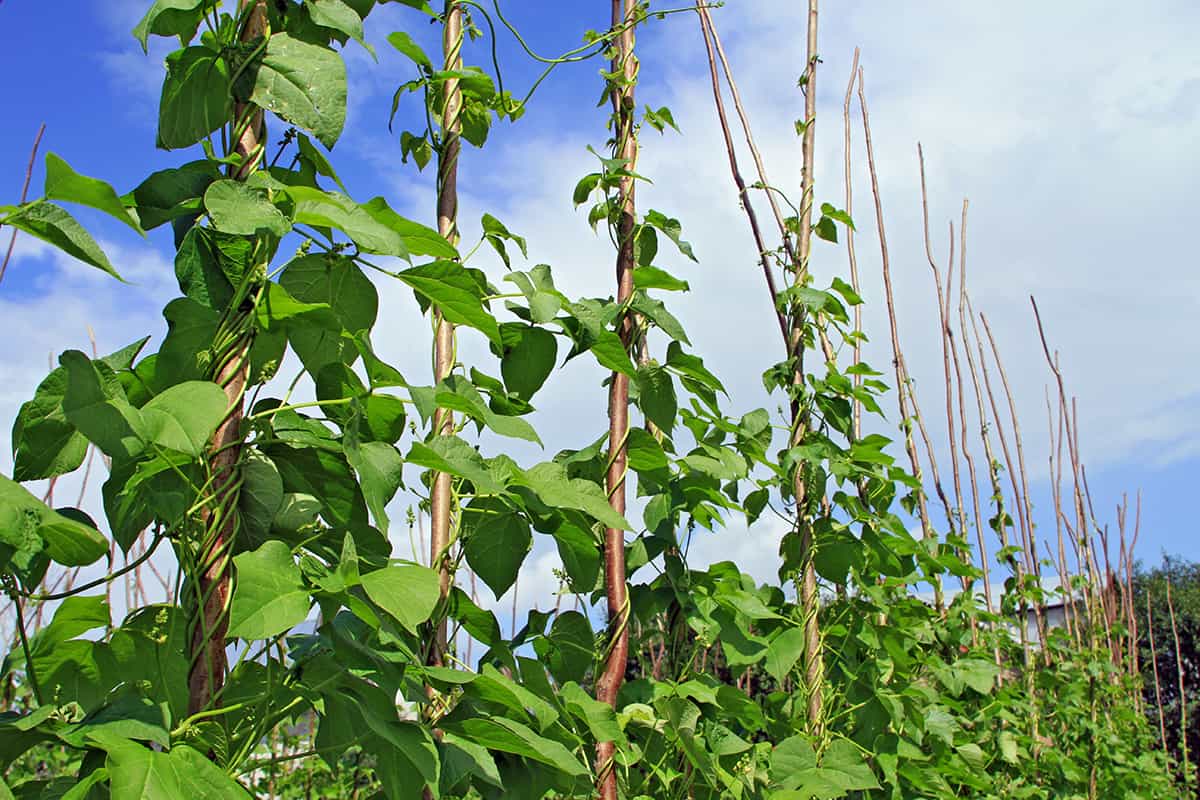 The vines can reach heights between 5 to 12 feet, depending on the variety. They all need to be planted outdoors and generally take more time to mature and produce compared to bush beans.

Supporting Beans In Your Garden

Here are relatively simple ways you could plan your pole beans garden.

Before sowing the bean seeds, it is ideal to set up the supporting structure first to avoid damaging the developing root systems. Allow enough ground space and height to properly accommodate the growth pattern of the ivy.

Line up several bamboo poles depending on the length of the area, six (6) to seven (7) feet high, six (6) inches apart. Each row should be at least two (2) feet away from each other so you can pass between them to water, mulch, inspect, and eventually harvest the beans.

You can add three (3) horizontal poles to strengthen the structure while providing more framework for the ivy to scale. Finally, interconnect the upper portion of each row to complete the trellis. 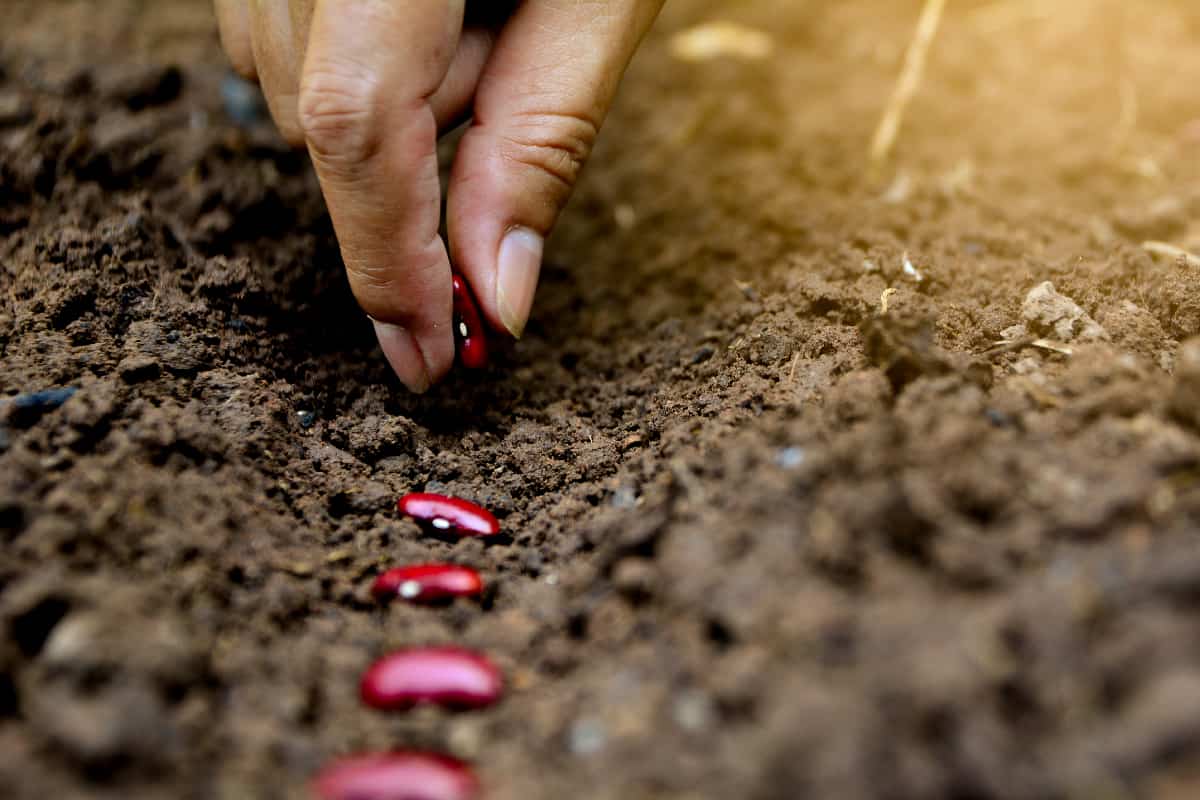 Directly sow the bean seeds into the ground rather than growing them in a nursery. The seedlings have fine, fragile roots that may not survive the transplant process. Bean varieties are a warm weather crop and need to be planted during late spring or early summer.

Plant four to five seeds evenly distributed around the base of each pole about one1 to one and a half inches deep. Water after sowing until the topsoil is moderately damp. The seedlings would usually appear in 8 to 10 days.

Sow bean seeds every two weeks to increase the yield and harvest time. 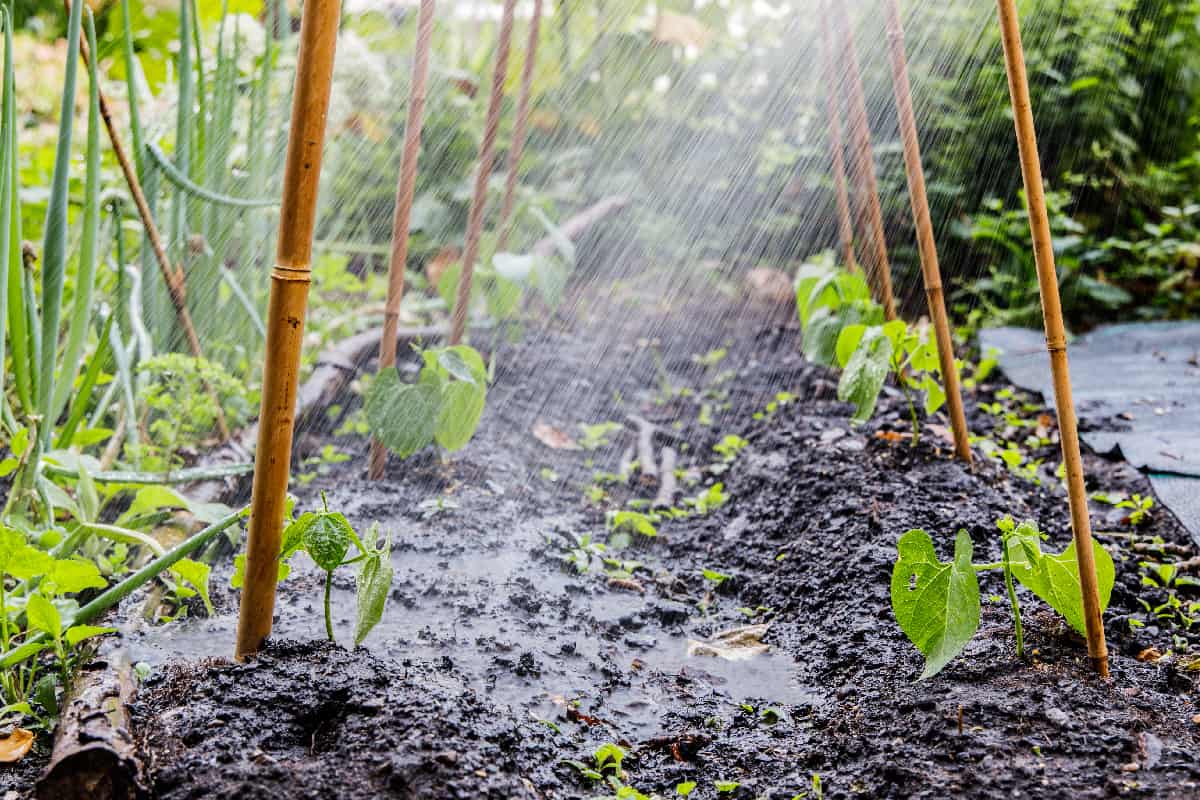 Pole beans need to be watered regularly and should not be allowed to totally dry out. Check and monitor the moisture level of the topsoil, especially in the early stages of growth.

Once the seedlings emerge, slightly lessen the amount of water to avoid root rot and gradually adjust it when the vines begin to scale the supports.

Plant them in an open area that gets six to eight hours of sunlight a day. Beans are categorized as warm-season crops and thrive with full sun exposure.

If you sow the bean seeds close to the middle of summer, you can provide garden covers during the early stages of growth.

Beans can obtain and fix nitrogen from the air and do not generally require fertilizers. Once the vines are about a foot from the ground, adding a layer of mulch would provide organic nutrients, help in maintaining moisture, and regulating the soil temperature.

Pole beans need their vines to grow and develop before producing pods, and it takes roughly two months from sowing to harvest.

They take longer to mature than other varieties but continually produce for weeks. Regular picking stimulates the production of more pods.

The bean pods do not mature all at the same time, but you can begin harvesting once they become firm and crisp. If you are not sure which to pick, note the time of flowering, and wait two weeks, then harvest. 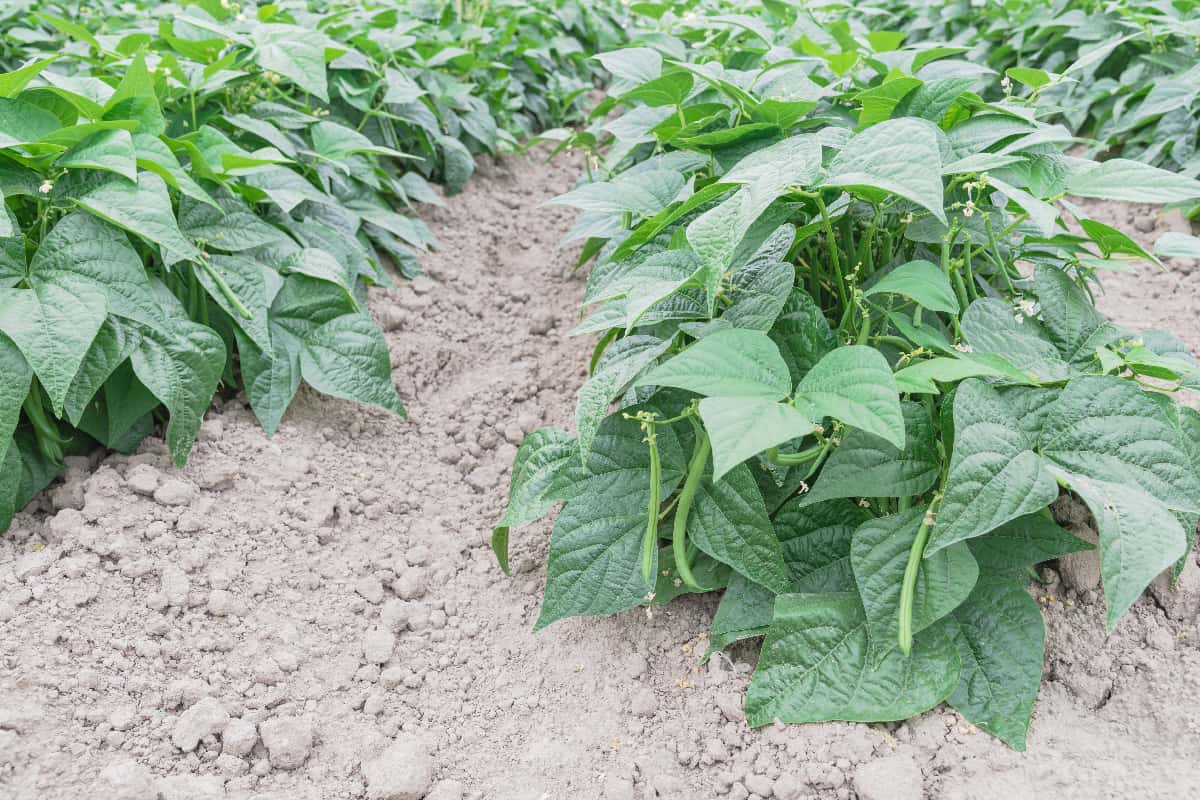 Bush beans are known to be warm season crops. They are cultivated right after the cool season and when the environment can be worked with. Growing the vegetation in a considerably cold climate can affect yield quality.

Bush beans do not mature as climbing vines, and as such, they do not particularly require a trellis for support.

As the name suggests, the plant grows into a small bush or shrub that is typically two (2) feet tall. This makes the plant ideal for garden beds with fairly small planting spaces.

Unlike pole beans, this variety matures quicker and is generally set for harvest two months after being sown.

The plant produces all of its vegetation in a relatively short period. After the phase passes, it can no longer generate crops and will begin to wilt. Planting regularly will result in continuous yield.

Bush beans may have a slightly different growing requirement than pole beans.  Here are simple ways how you can nurture and cultivate this variety.

Bush beans are particular about the general climate and soil temperature. The ideal soil temperature is between 70 to 80 degrees Fahrenheit, so it is advisable to only begin sowing after the end of the last frost date in order to achieve a better yield.

Unlike pole beans, this variety does not require a wide growing area. Sow the seeds an inch below the ground, and two (2) tofour (4) inches apart. Make sure that the rows are spaced 18 to 24 inches away from each other to facilitate the plants’ growth.

Bush beans are warm season crops that prefer full sunlight exposure of at least six to eight hours a day. Some varieties can tolerate partial shade. However, yield and germination are both affected by lighting.

The plant should be sown in a slightly acidic to neutral well-draining soil to prevent water logging that may lead to root decay and fungal infection. Ensure that the environment is not too compact, otherwise, the seedling may emerge with difficulty from the ground.

Hydrate the newly-planted seed immediately after planting. Afterward, keep the soil moist until a sprout begins to grow. By then, it will not be necessary to moisten the plant frequently in a week.

Since beans acquire nitrogen from the air, feeding the plant with fertilizers high in nitrogen is not recommended – it will only facilitate leaf growth with a lesser yield. Instead, you can nourish the soil even before sowing the seeds.

Organic manure, compost, and vermicast (worm casting) can be added to enrich the growing medium. Amending the soil can considerably improve drainage and soil aeration.

Check out Michigan Peat Compost And Manure on Amazon.

Apart from its general growth requirements, covering the topsoil with a layer of mulch is necessary to help prevent weed proliferation. Ideally, only the surface has to be maintained because beans have a shallow root system. Deep cultivation could damage the roots.

In regions with a particularly short growing season, you can use a garden row cover to keep temperatures warm and ideal for your bush beans.

Begin harvest when the pods are firm, elongated, and have partially developed seeds. Bush beans tend to yield more produce if the crops are continually reaped.

To maximize the production, harvest immediately, especially since bush beans tend to produce all their pods within two weeks after planting.

Make sure that the crops are entirely dry before harvesting to prevent the spread of a plant disease that can otherwise affect your whole garden bed.

Do All Beans Climb?

Beans can be classified as pole and bush beans. Pole varieties climb, redquiring a trellis for growth support. Bush varieties are known to mature as a small bushy plant that does not need a garden lattice.

Pole bean varieties grow in vines and need supporting structures to climb, grow and produce pods. Bush beans develop close to the ground and may be cultivated without stakes. We hope the article helped you provide the growth requirements of both cultivars.

How Long Do Bamboo Garden Stakes Last? [Tips To Make Them Last Longer]

Can You Grow Beans And Chickpeas From Dried Beans? [Or Fresh!]