Similar to all living organisms, trees are composed of specialized organs responsible for mechanisms significant for their survival, growth, and development. Firs and coniferous plants have cellular structures that keep them alive. Luckily, we have the answers for you!

Firs (Abies) are evergreen trees of the pine family with a characteristic dense pyramidal crown. They have cylindrical cones that stand upright, produce sap, generate large amounts of pollen in the spring, and feature flowers called strobili.

Firs have their own physical attributes that will help you understand their general nature. In this article, we will talk about the tree’s prevailing features and characteristics. If you wish to find out more, continue reading! 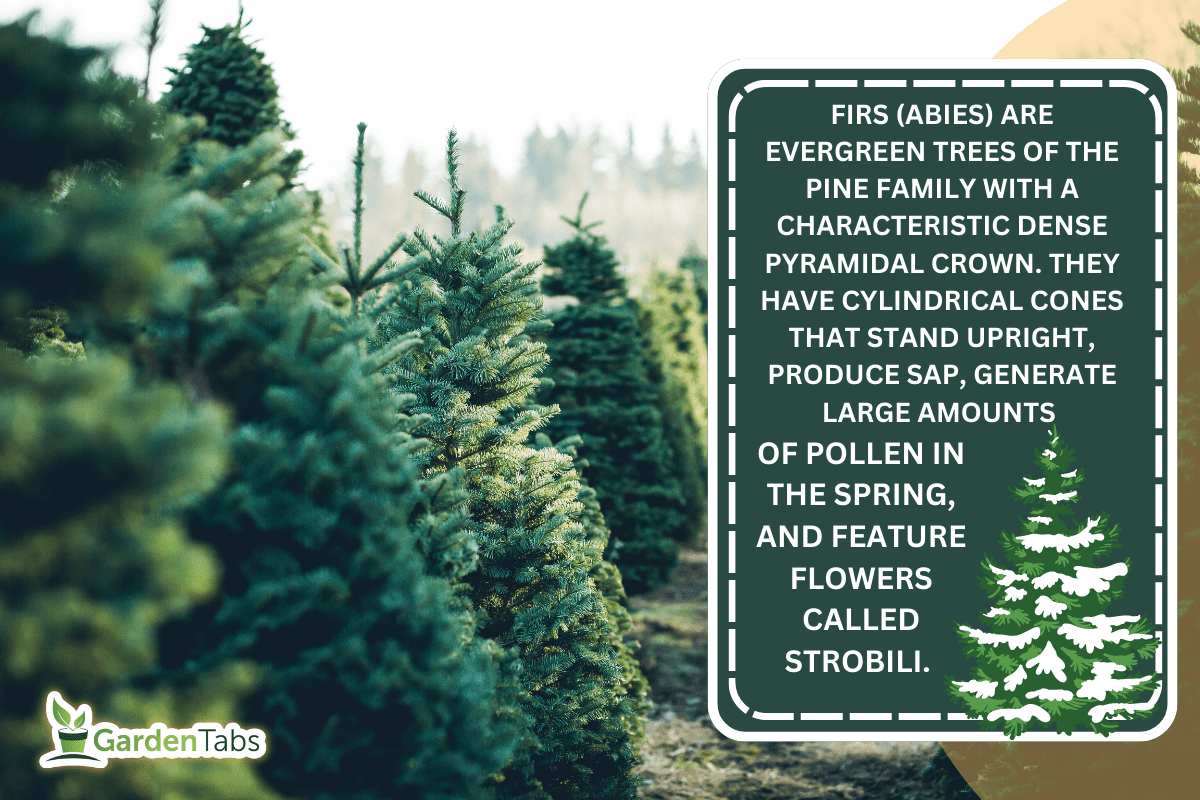 Firs are coniferous trees belonging to the pine family and are found across North America, Europe, Asia, and North Africa. They are large trees reaching a mature height of 10 to 80 meters (33 to 262 feet).

Dwarf varieties are well-suited as Christmas trees because of their size and slow-growing nature, especially when planted in pots.

After the holidays, you can always relocate your fir tree and add it to your garden or landscape. 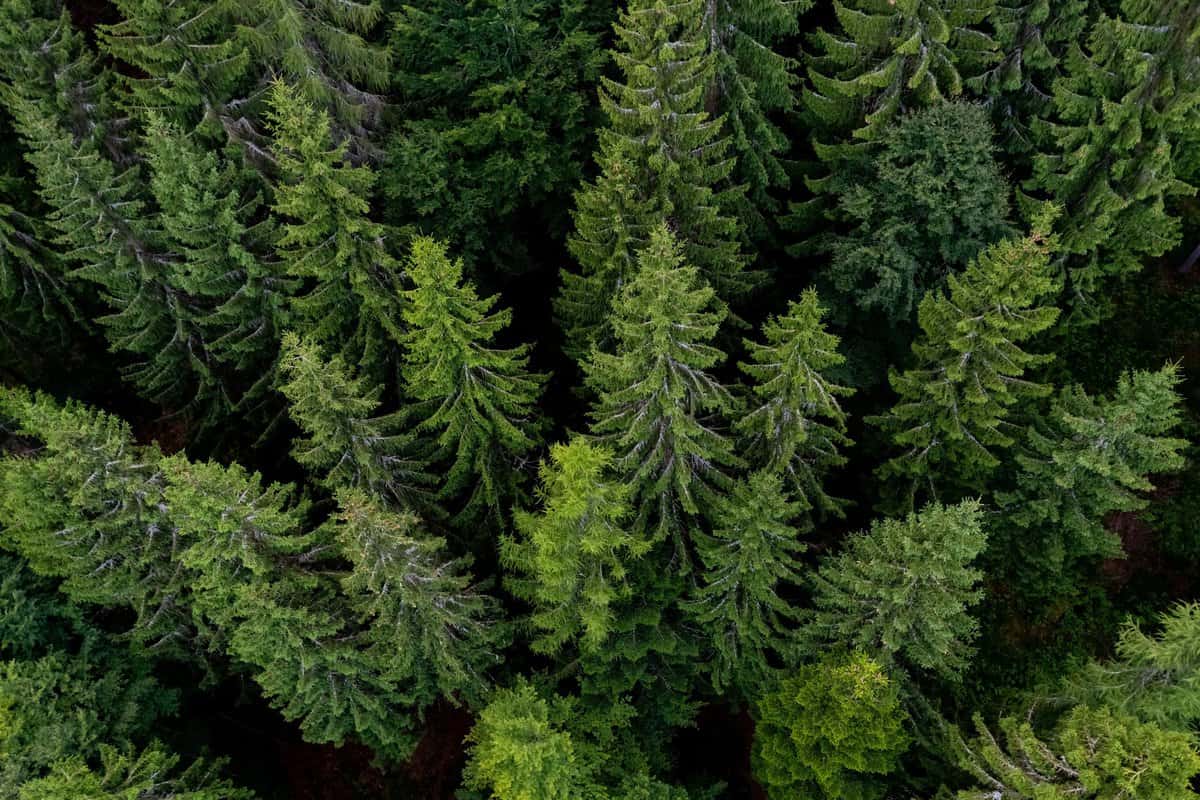 You can distinguish fir from most conifers by looking at the foliage’s overall features.

The needle-like leaves appear flat and are attached individually to the twigs or branches as opposed to the clustered appearance of pines and spruce.

Unlike other plants, the flowers, also known as the cones, are particularly unattractive to insects and birds because of their general appearance, which is why they heavily rely on the wind for pollination. 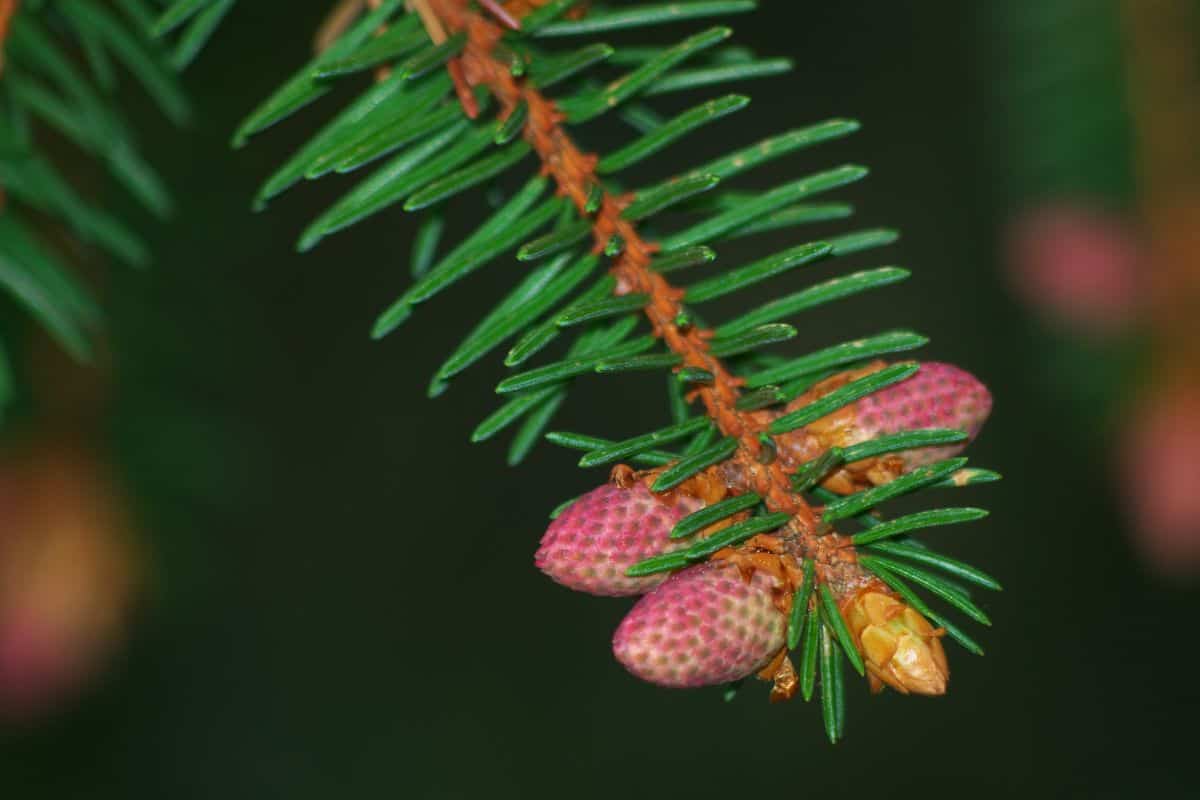 A conifer cone is a plant organ containing reproductive structures found in trees of the pine family. Most tree species, including firs, have two types, male cones bear pollen and appear in late spring.

They are usually smaller and have a soft spongy herbaceous appearance. 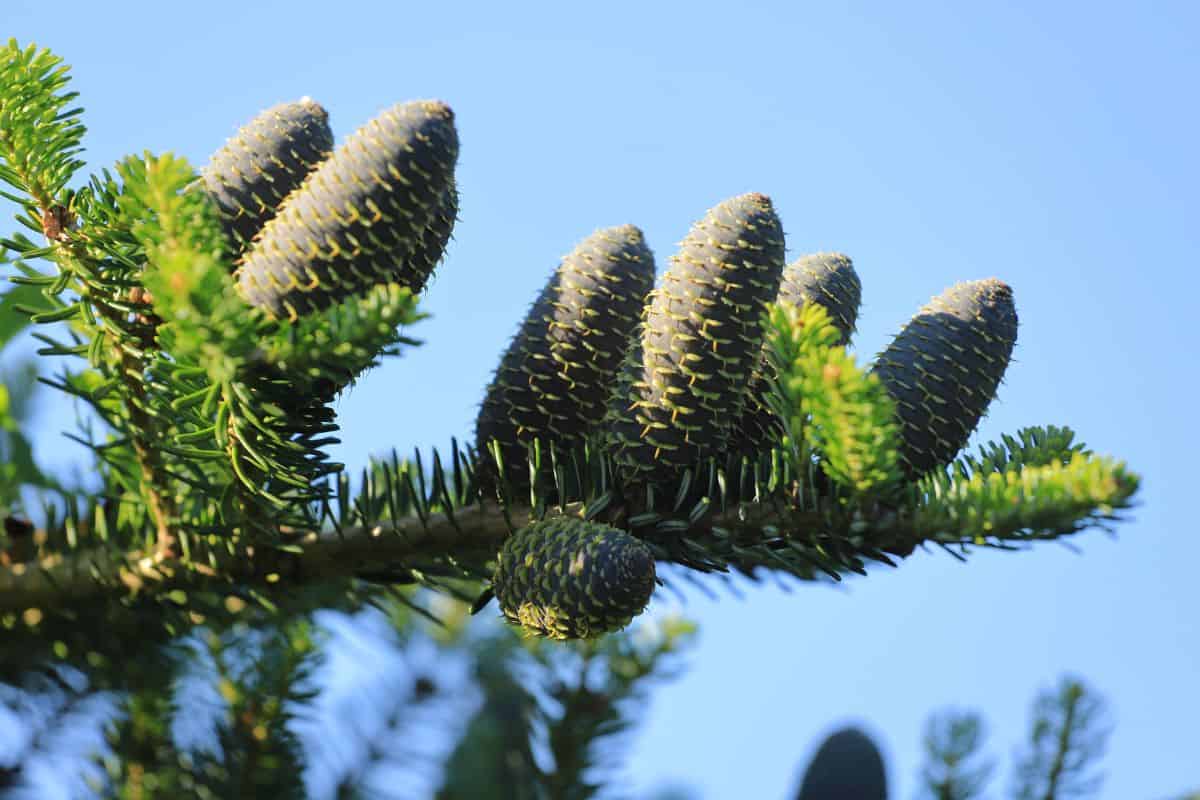 Upon maturity, they release pollen grains and then slowly disintegrate. Female cones contain seeds and are the counterparts of flowers in coniferous trees.

They develop into hard woody cones to protect the seeds and are found on the tree's upper crown.

Fir trees are easily distinguishable because their cylindrical cones stand upright while most others hang from the branches.

The scales or bracts of the cone are relatively longer, and the entire structure measures between 2 to 10 inches long when mature.

Female cones grow on the uppermost branches and open to release the seeds when the conditions are right for germination.

The male cones develop on the lower portions of the tree to avoid self-pollination or inbreeding, which can lead to genetic diversity or abnormalities.

The sap is the equivalent of blood in plants; they transport water and nutrients to the different parts of the tree. Since the tree derives sustenance from two primary sources, the leaves and the roots, the sap has other channels of movement.

The xylem carries water, soil nutrients, and minerals from the roots up to the different structures of the plant.

After each year, the xylem channels die off and are replaced by new ones; they are responsible for forming annual rings, which allows the tree's age to be determined.

The phloem delivers sugars produced by photosynthesis from the leaves to the branches, fruits, and root system. The visible sticky substance oozes on the bark of tree trunks.

Maple syrup may be the most popular derivative of sap, but fir trees offer some benefits.

Since it belongs to the pine family, the sap has anti-inflammatory properties, which may be used to treat wounds, scratches, and itching.

Before the development and popularity of manufactured sealants, sap also served as waterproofing for boats, containers, fabrics, and even boots. It is also an adequate fuel to start fires, especially in wet conditions.

Fir trees are classified as gymnosperms, which means they produce pollen and seed cones to reproduce.

Once male pollen reaches the female's ovules, a fertilized seed is produced and reaches maturity over time.

It is then released from the tree and develops into a new plant if the soil conditions are hospitable enough.

Firs produce considerable amounts of pollen yearly during the spring and early summer. They are relatively large due to the sac or bladder, commonly referred to as wings, present in the grains.

These structures allow them to be carried great distances by the wind, accounting for the abundance of fir trees and their numerous species.

As discussed, the female cones, which contain seeds or ovules, are the counterpart of a flower among conifers. They may not present with the typical structures but are anatomically equipped with equivalent features necessary for reproduction.

Scientifically, they are referred to as strobili.

They appear as woody, conical or ovate organs with alternating scales or bracts containing seeds typical of conifers and certain nonflowering plants.

Apart from the fir’s attributes above, other noteworthy and exciting features still make up your tree’s general characteristics. These include: 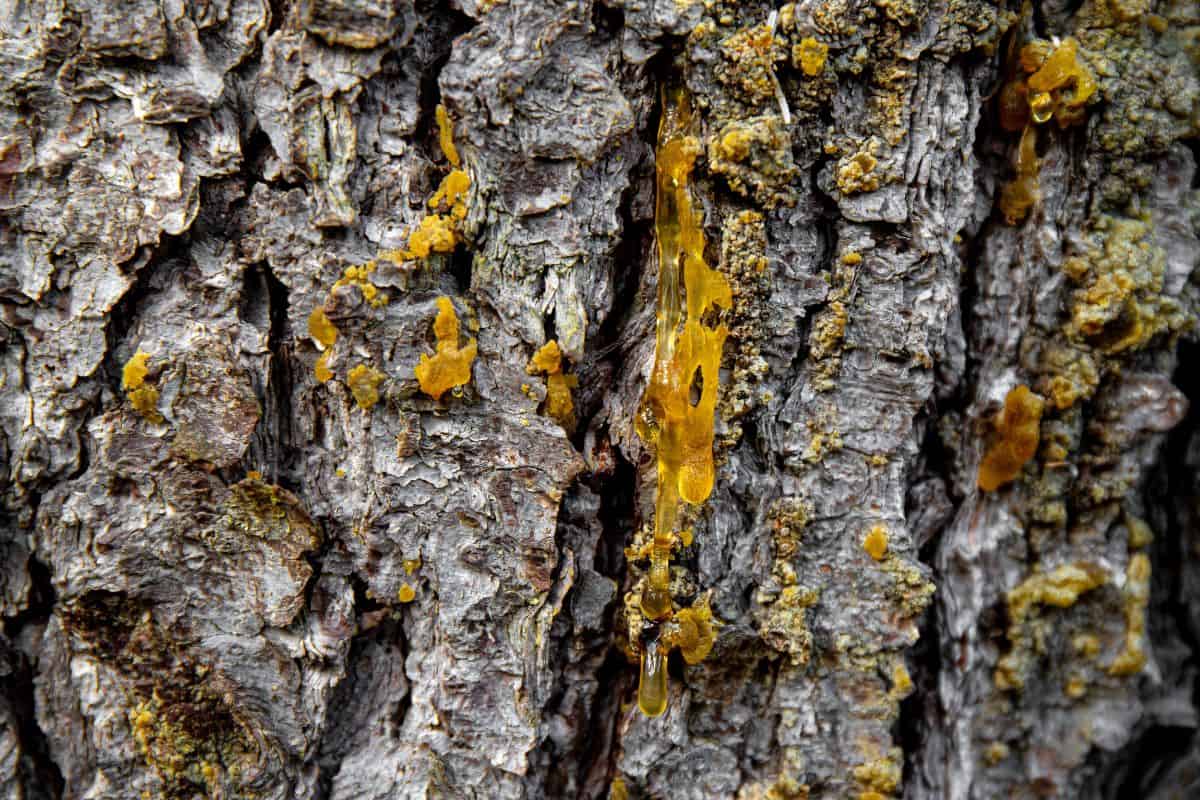 While sap generally transports water and nutrients through the xylem and phloem systems of trees, the resin is stored and released as a defense mechanism.

When a branch or the trunk is cut or injured, it oozes out to create a protective layer over the area of the wound. The viscous substance also traps insects and other small predators and prevents the entry of infectious parasites.

The balsam fir is noted for its production of resin concentrated within prominent blisters on the bark. Pierce the nodes, and the substance will flow, ready for use.

The viscosity of balsam fir resin can stop the bleeding of small cuts and form a protective seal against infection, similar to what it naturally does for the tree.

Smearing the resin over superficial burns will reduce the inflammation and sensitivity of exposed nerves and considerably lessen the pain.

Fir is a softwood primarily harvested and used as pulp for plywood and rough timber. It has tight, close grain lines that render it stable and less prone to twisting and warping but has no decay resistance qualities.

Furthermore, we recommend it for indoor use, such as framing and drywall application. In contrast, it is not good for the outdoors since it may expand or shrink depending on the temperature.

Why Do Fir Cones Open And Close?

Fir cones typically open and close in response to changing climate and humidity.

When the general condition is humid, the scales will clamp up and seal to prevent seed dispersal that is otherwise ineffective during rainy weather.

As the air becomes less humid, the cones open to release seeds essential for germination and survival.

Fir cones that fall on the ground still undergo the process and can sense the change in humidity even though they do not contain living cells.

This becomes possible through the scales’ cellular structure.

The innermost layer is composed of stiff fibers that do not expand, while the outermost portion or the scales’ undersides have flexible cells that stretch and dilate.

If the scales are open during humid or wet weather, water droplets or moisture will slowly fill up the cone’s flexible cells, and as such, they expand, causing the scales to close.

When the general climate is dry, moisture evaporates, and the opposite happens.

Why Are There Many Conifer Cones This Year On My Fir?

Trees have varying degrees of reaction toward climate change.

Conifers such as pine and firs will produce large amounts of cones during long periods of drought and when temperatures are too high for their own survival.

The increase in temperature has been entirely evident over the past several years.

The trees sometimes act as a defense mechanism against insect infestations. This is particularly apparent due to habitat loss. Therefore, resulting in the increase of insect population in one region or area.

Although the general attributes and characteristics are not similar to most plants, they are inherently significant for their growth and survival.

Made it to the end? Check out these related posts!

What To Plant Under Fir Trees