Why won't dahlia buds open? It is not uncommon, and there are a few potential causes. We researched this topic to share some valuable information with you in regards to this issue.

Dahlias may not be blooming due to inadequate sunlight, improper watering, or inappropriate planting. Sometimes, infection with powdery mildew or an excess of nitrogen may also be to blame. To help the dahlia buds to open, here’s what to do:

Continue reading to find out more in detail about why dahlia buds don't open and how to encourage them to bloom. We will also share some guidelines for planting dahlias. 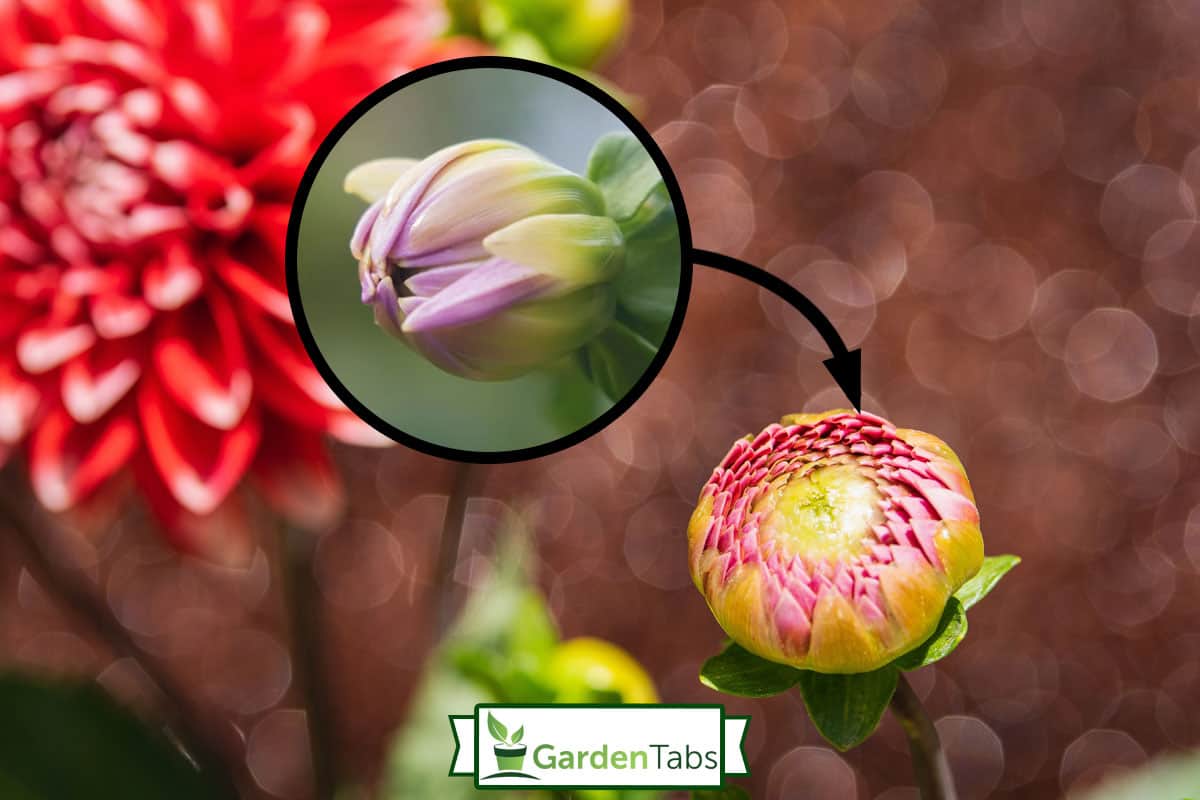 What Kind Of Flower Is The Dahlia? 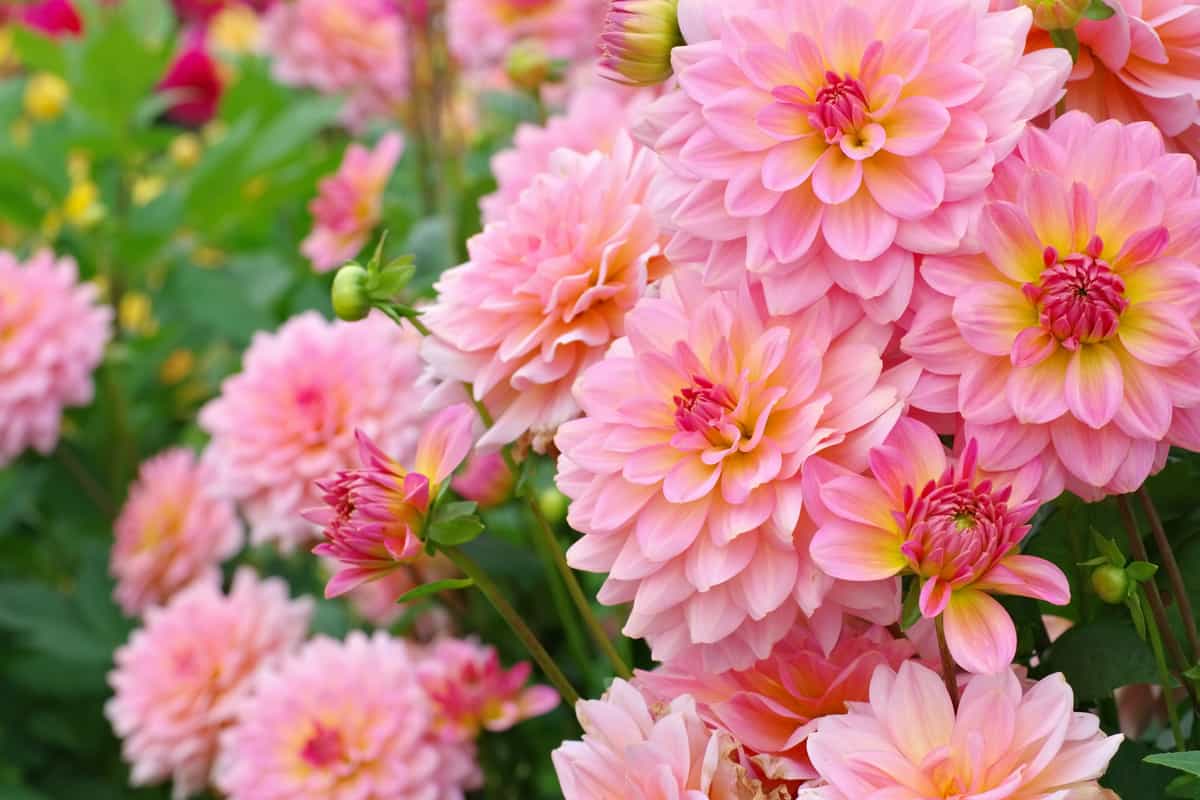 Dahlia is under the family of Asteraceae which also includes the daisy, sunflower, chrysanthemum, aster, and zinnia. Dahlias exude wonder and joy and are usually planted in a row along the border. They make excellent cut flowers.

Moist and temperate areas are ideal for dahlia growth. Dahlias beautify any sunny garden with a growing season that is at least 120 days long. They are not well adapted to severely hot areas such as Texas or Southern Florida.

In the late spring, the tubers are buried. In the colder areas of North America, they are regarded as delicate perennials. Dahlias can either be treated as annuals in colder climates or dug up after the first frost and kept indoors for the winter.

Dahlias are stunning flowers that bloom from midsummer until the end of the season. Most types grow to a height of 1 to 6 feet and come in a wide range of sizes, from tiny 2 inches pompoms to enormous 15-inch blooms.

Why Are My Dahlia Buds Not Opening? 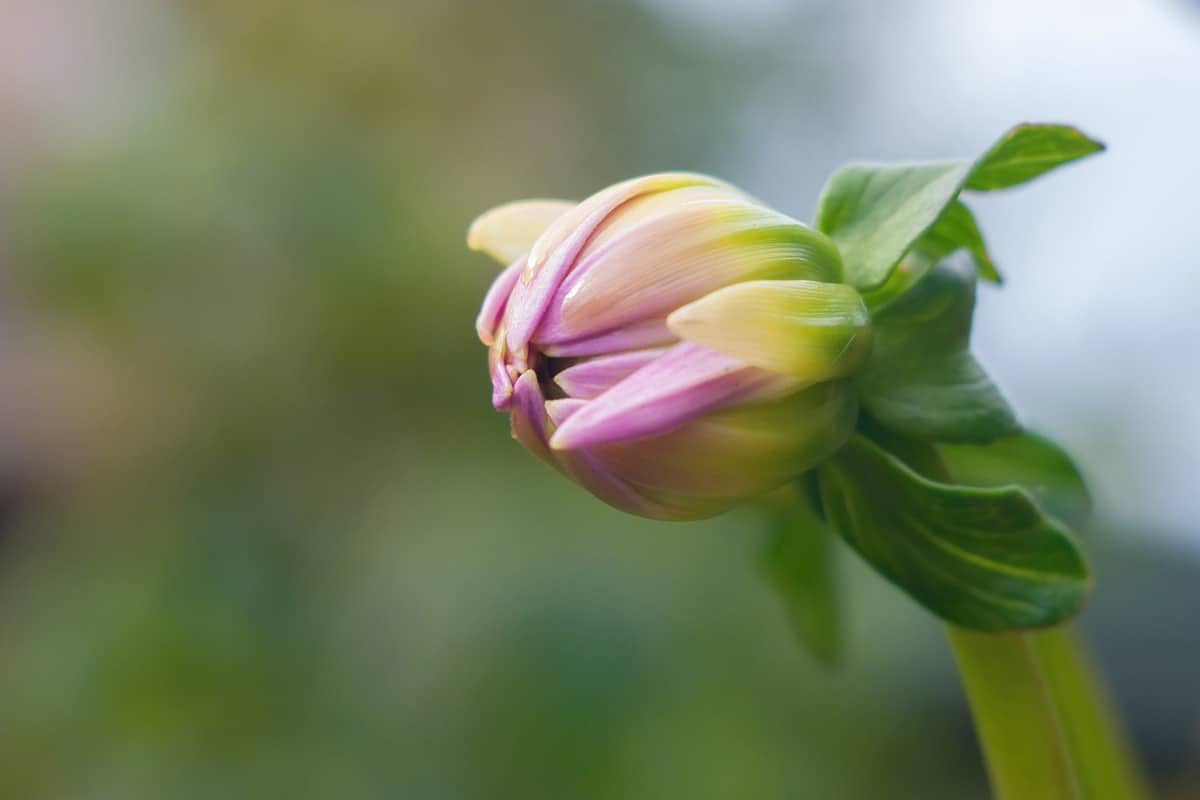 Dahlia's failure to open or bloom is caused by a few factors which will be discussed below:

Planting in an area with insufficient light is one of the simplest mistakes a gardener can make. Dahlias love the sun. Even though a little midday shade won't hurt the plant, too much can hinder its ability to blossom.

Look at the location in your home where your dahlias are kept. The dahlias won't blossom correctly if they are kept inside and away from windows where they might get direct sunlight.

Additionally, if the amount of time that these plants are exposed to direct sunlight is insufficient, their flowering will also be impacted.

All plants require water to survive but they only digest a small portion of what they take in. The remaining amount is used for the transpiration process.

However, lack of sufficient water is another common factor in the failure of dahlia buds to open. If the soil is mostly dry all the time, then it is being watered insufficiency. This plant develops fairly quickly during the growing season, producing new leaves and buds every few days. If you don't give it enough water, it won't be able to bloom as much.

Dahlias grow a lot of leaves when there is an excess of nitrogen in the soil. However, this excess nitrogen may also prevent your dahlias from blossoming. In fact, nitrogen that is administered in excess of what is usually required reduces flowering, especially when it occurs before the dahlia bloom season.

To reach its full height and create an abundant bloom, the dahlia plant needs nutrient-rich soil, but if you treat an already fertile soil or use a fertilizer with a high nitrogen concentration, your bloom will suffer.

Dahlia tubers cannot withstand the post-cold soil when they are planted in the early spring. This is because these plants can only grow and reproduce in warm, tropical climates, where they are native.

Dahlias planted early in the season may not grow as tall, instead produce fewer flowers, and in extremely damp soil, they may even rot. 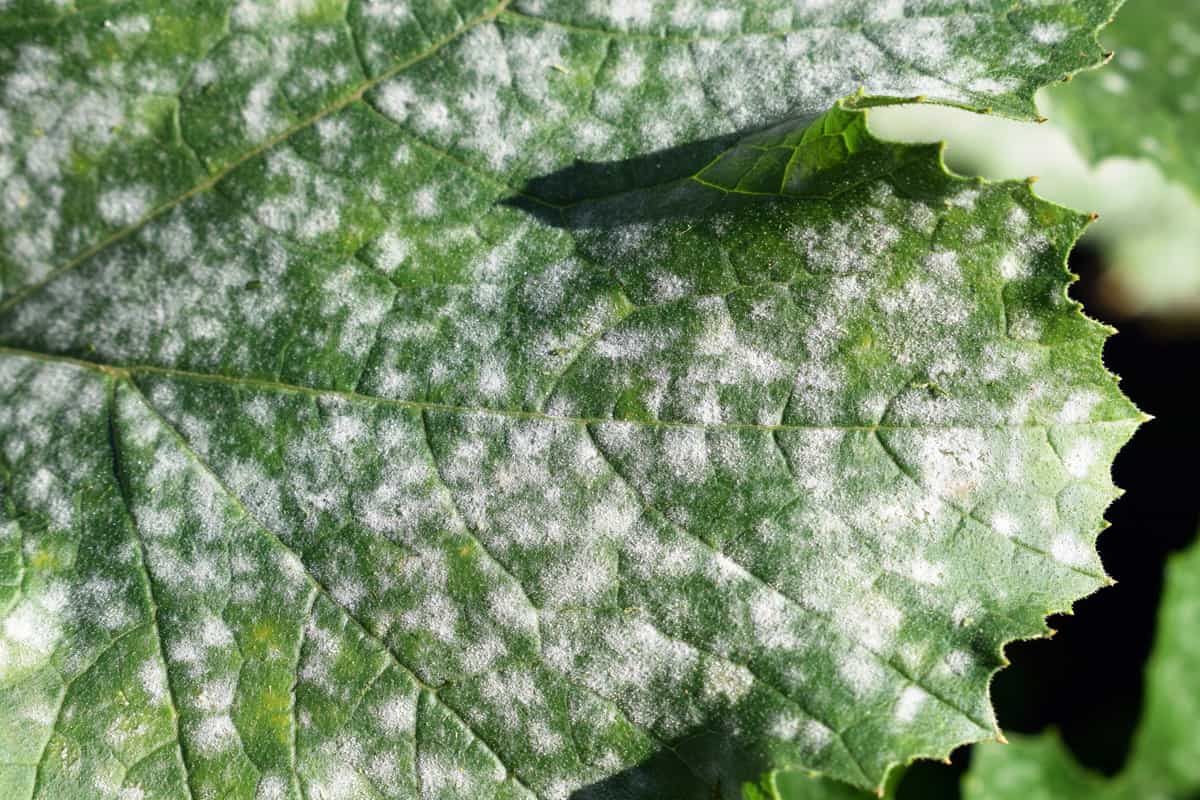 Common fungal infection powdery mildew almost always prevents dahlias from growing. Although it is not a lethal infection, it might greatly damage your plant, which would prevent it from blooming.

The emergence of small, yellow dots on the surface of the leaves is the first indication of a powdery mildew infection. The upper side of the leaf is where these spots initially appear. These spots enlarge and combine as the disease worsens to develop broad blotches that may potentially completely cover your leaf.

The appearance of white powder on leaves is one telltale indicator of a mildew infection. Because they cannot perform photosynthesis, their leaves may begin to fall off. Sometimes the damaged plant's stem also develops growths resembling mushrooms.

Being a heavy bloomer has the drawback that there are only so many resources available. Each bud needs a set amount of resources to develop and bloom, and the flower that results from this needs resources to survive.

The flower continues to consume resources that could be going toward new buds as it ages and starts to perish. As a result, in the middle of its flowering season, the plant may stop generating new flowers.

What To Do To Get Dahlia Buds Open? 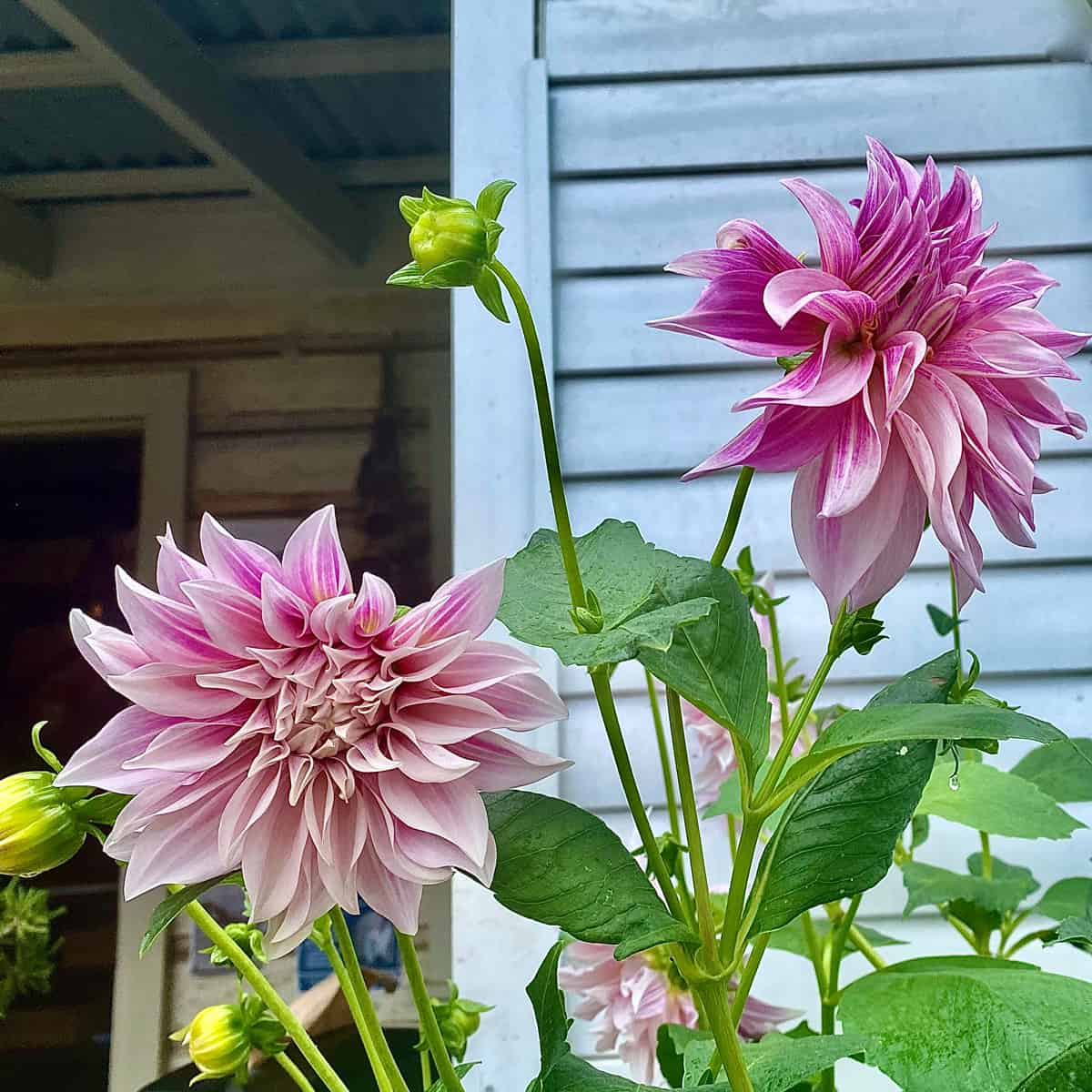 Following are the tips in order to get dahlias to bloom profusely:

Starting in the spring, your dahlia tubers require at least 6 hours of daily direct sunlight if you want them to bloom on time. This time will increase to roughly 8 hours if you live somewhere where the sun doesn't shine for a long enough period.

The greatest place for these plants to flourish is outdoors, but if you must keep them indoors, they should always be placed close to a window. Give your plants 6 to 8 hours of early morning direct sunlight. This will provide these plants with adequate, gentle sunlight without subjecting them to intense late-day sunlight.

The tubers of dahlias require a lot of water, especially from spring until summer when they are in bloom. To get these plants to bloom, water them at least twice a week. Deep watering refers to providing a lot of water each time and continuing to water until the water starts to run out of the drainage hole.

During the warmer months, the soil of this plant must always be moist. Mulching is an excellent way to strike a balance between this and overwatering. To increase the soil's ability to retain moisture, add a few inches of mulch to the top.

Mulch is a substance that is placed around or above a plant in order to improve or insulate the soil such as compost, bark, or decomposing leaves.

Never Fertilize With Nitrogen Before Blooming

Have your soil tested to determine how much nitrogen is actually present. Use a fertilizer with a low nitrogen content if the soil already contains adequate levels of nitrogen.

Pick a product whose nitrogen, phosphorus, and potassium (N-P-K) ratio is low, for example, 5-10-5. These three elements that make up the N-P-K ratio are printed on every fertilizer packet.

Plant In The Late Spring

Dahlia tubers should only be planted in the late spring when the soil temperature reaches at least 50°F. New shoots won't start to sprout and grow until that time. Flowering will begin in the late summer and last until early fall as the weather continues to warm up.

Although powdery mildew is not a particularly harmful infection and seldom kills a plant, it must be thoroughly and promptly treated because it prevents your plant from flowering. It might also be the reason dahlias don't grow very tall.

Neem oil is an excellent antifungal agent if you're looking for a natural solution to this issue. Neem oil should be soaked into a cotton roll, and then applied daily to the dahlia plants' leaves. The white spots will start to disappear in a few weeks.

Making a mixture of baking soda and water is another DIY approach. Remember that this mixture is too severe for the plant to tolerate being administered to it every day. Additionally, you can eliminate powdery mildew by utilizing fungicides sold in stores.

As soon as dahlias begin to bloom, make it a habit to deadhead some of the flowers. This may seem paradoxical, but doing so actually encourages your plant to produce more flowers, and it's a frequent technique to increase dahlia flower production.

Deadheading is an essential element of dahlia care even though it is not necessary for many plants. Also, you are assisting the plant in resource conservation and distribution within its system.

How To Plant Dahlias 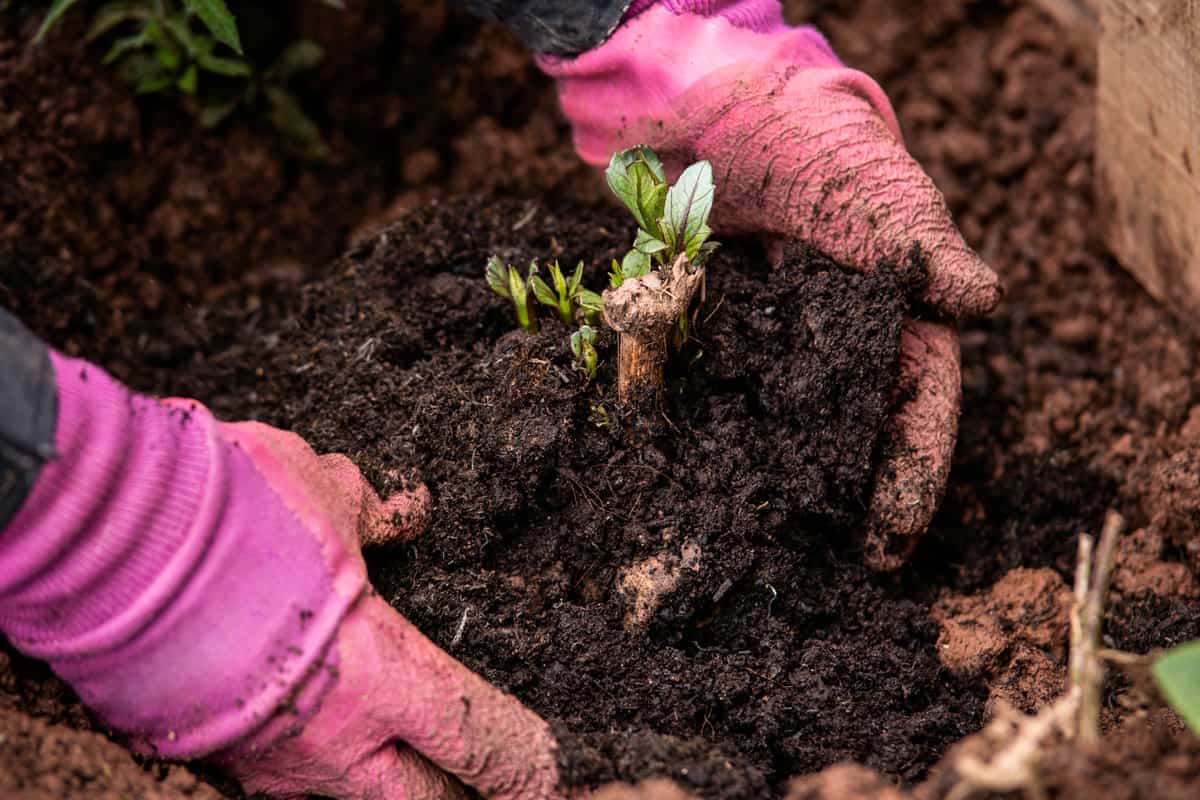 Following are the guidelines for planting dahlias: 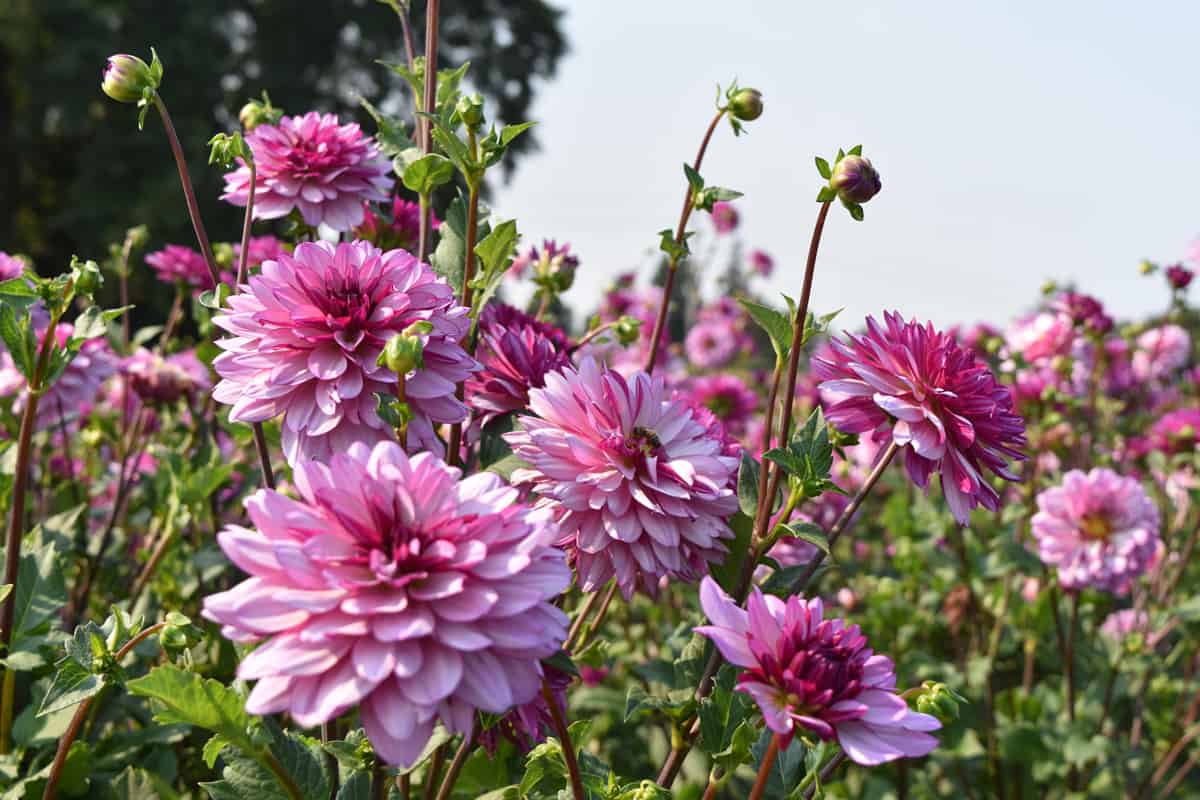 Dahlias unquestionably produce one of the world's most exquisite flowers. So if your dahlias' buds aren't blooming, remember that it may be due to inadequate sunlight, improper watering or inappropriate planting. Therefore, after going through the information in our post. We hope you are able to get those beautiful buds to open.

Check out these other great posts that you may be interested in:

Why Are My Dahlias Dying?