Taking care of the plants throughout your garden can feel impossible sometimes. Do you have laurels growing or winding down after the blooming season you want to prune but have no idea where to start? Is it a good idea to deadhead laurel at all?

We will cover these questions and many others throughout this article. With that said, let's dive in!

You want to cut the flowers off a laurel once they are wilted and lose their color. Typically, it's best to let nature take its course during the blooming season so you don't stunt or shock your laurel flowers.

With that said, we recommend waiting until late spring/early summer to do any heavy pruning. Moreover, you can remove the dead flowers off your laurel as they grow, but try to keep this to a minimum.

As we begin, we will cover all things laurel and discuss when and how to deadhead one. Whether it's your first time dealing with blooms or you're curious, we're here to answer all your questions. Without further ado, let's jump into this post below! 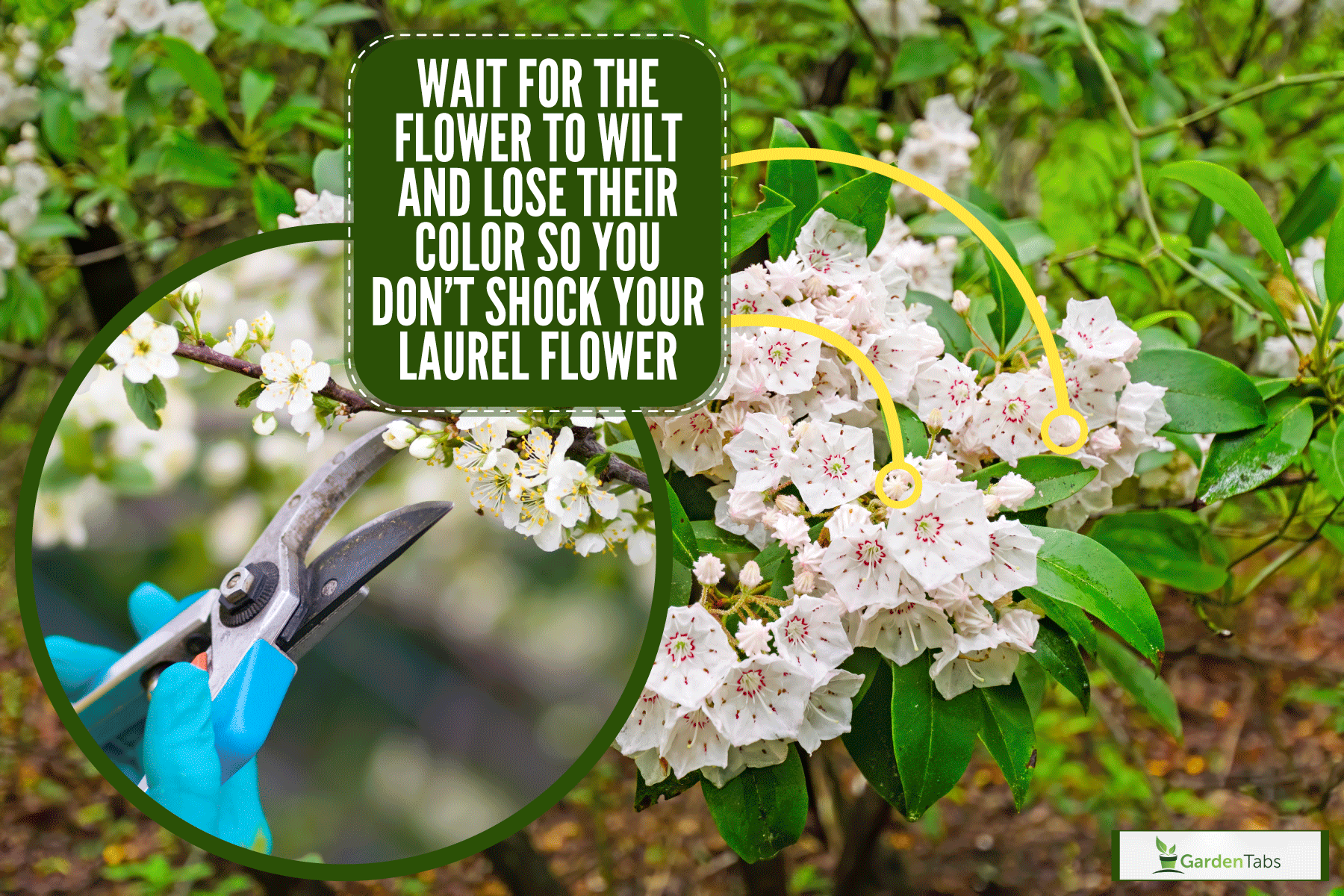 Should I Deadhead Laurel?

If you see dead flowers or leggy sections of a laurel, it is generally okay to prune or "deadhead" it. Like many flowering plants, laurel does best with minimal pruning during the blooming season.

Sometimes, even if a flower looks far gone, it can come back or last a few more days/weeks. Therefore, the last thing you want to do is remove that still-alive bud from your plant.

Doing this can convince your laurel it's time to wind down for cooler weather, ultimately stopping further flowering from happening. 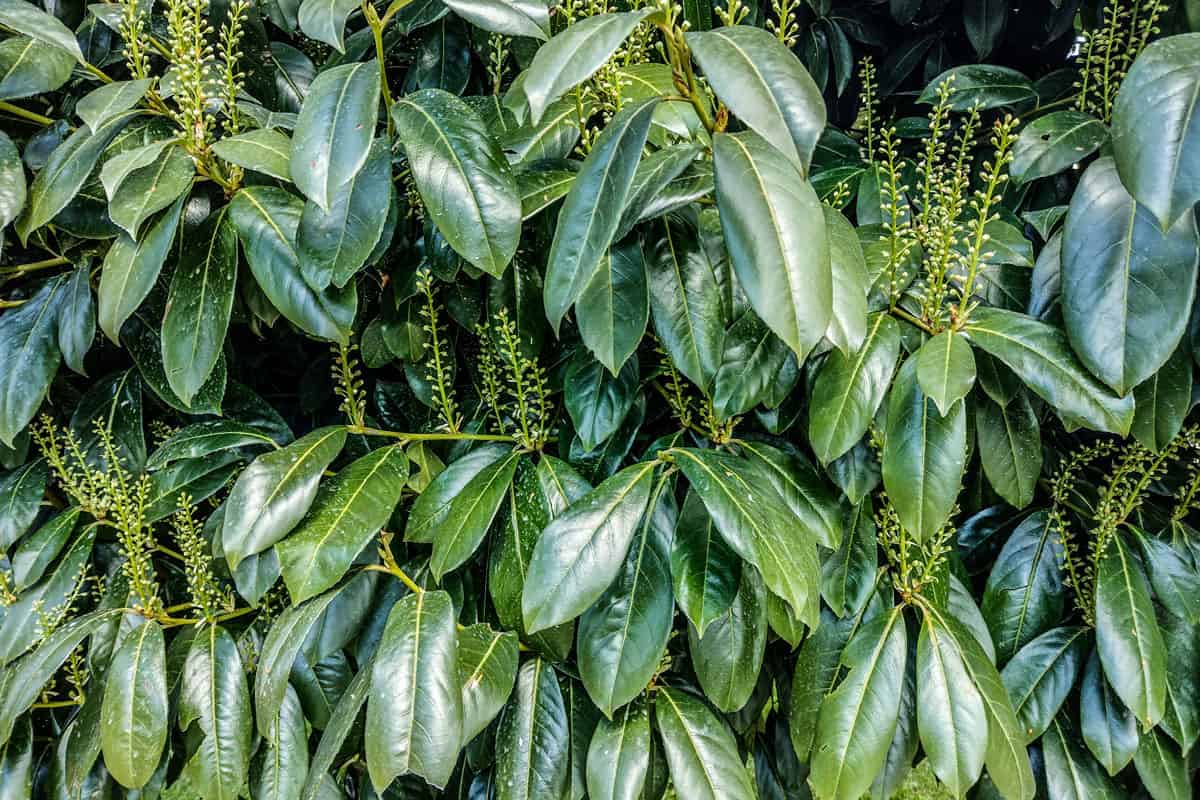 Considering flowers are the best part of springtime in the garden, it would be a shame to have this happen.

According to experts, deadheading needs to be done carefully, as the new buds are usually just below the old dying flower on your laurel.

So, keep a close eye on your plant as you do this, and try only to deadhead if necessary.

When Is The Best Time To Prune Laurel?

In general, a laurel will do best with a once-yearly pruning. You want to try and get this done in the later spring or early summer.

We say this because laurel needs time to adjust after a trimming before the weather gets cold. If you prune a laurel right as the temperatures fall, your plant can go into shock and come back sick next year.

Additionally, deadheading a laurel too late in the year can cause its flowers to be weaker in the spring, which you want to avoid.

All you need is a simple hedge trimmer and some gardening gloves to do this. Typically, laurel doesn't need more than a few inches taken off the top or sides, so this shouldn't be labor intensive.

As we covered, this flowering plant does better when left alone, so the less you do, the better.

Can I Prune Laurel In The Winter?

If you live somewhere cold, it could be worth it to do your heavy pruning in the later winter. Of course, we recommend late spring/early summer for your annual trimming, but if you prefer to wait until your laurel is dormant, that's fine too.

Many gardeners choose to give their laurel a more significant shaping when it isn't growing to keep it from being affected in terms of flowers/new growth.

However, if you prune in the later springtime or early summer, we don't recommend also going in again towards the last few weeks of wintertime.

Think of this like a haircut your shrub needs once each year. Pruning more than the required time can adversely affect your laurel, even stopping it from flowering in the spring.

Remember, you will start to see new growth pop up between March and April, so as long as your pruning is completed by then, you should be fine.

How Do You Deadhead Laurel?

Now that you know the basics, it's time to deadhead your plant. Luckily, this won't be too difficult, as laurel grows slowly.

To start, you want to grab a sharp pair of scissors or garden shears.

Next, you need to assess which flowers on your laurel are dead. Keep an eye out for brown leaves, sparse petals, and crispy-feeling buds. 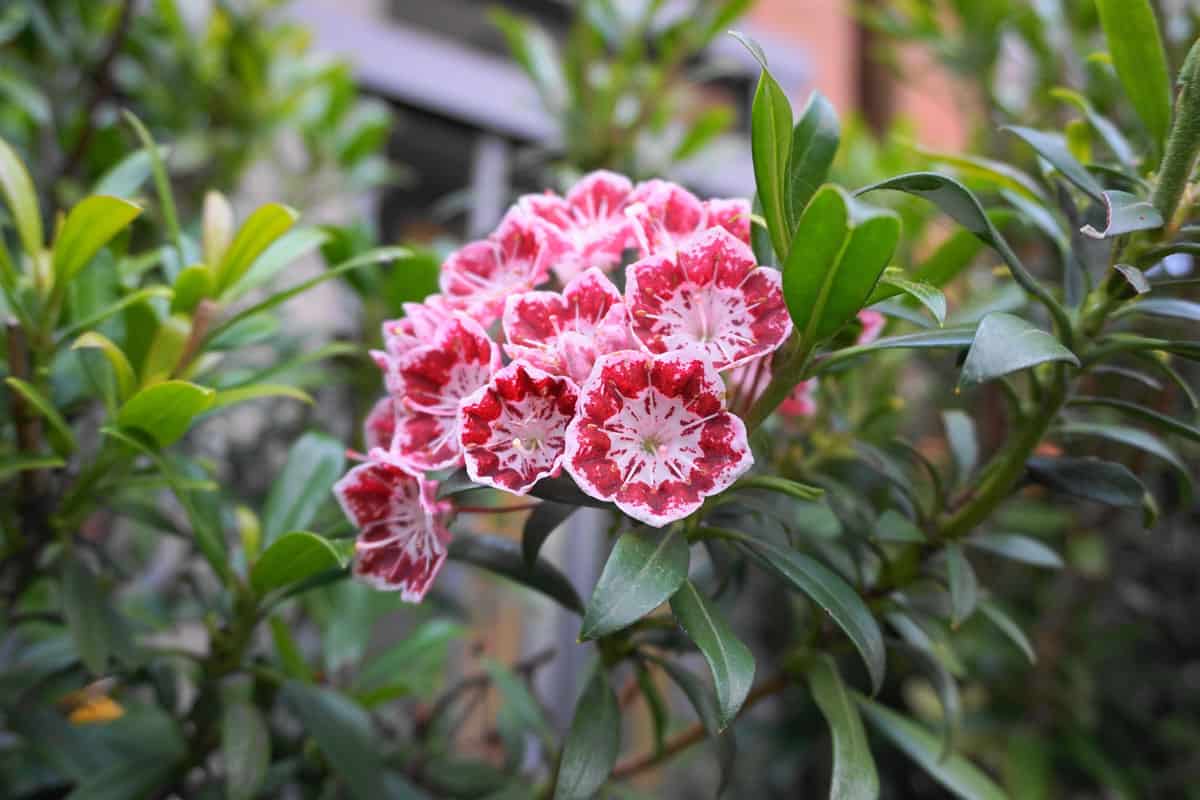 Once you determine the problem areas, cut the flower off as close to its stem. Some more experienced gardeners pinch the flowers off their laurels, so this won't always require a tool.

The key here is not removing any of the future or existing buds from your laurel. These will generally be at the base of your existing flower/bloom, so you don't need to mess with the stem much at all.

It's also worth mentioning that you don't always need to deadhead and prune simultaneously. Since deadheading is more flower-focused, there's not always much need to trim the branches from your bush.

Again, less is more with this species, so try to be gentle and only remove flowers that need to go.

How Far Can You Cut Back Laurel? 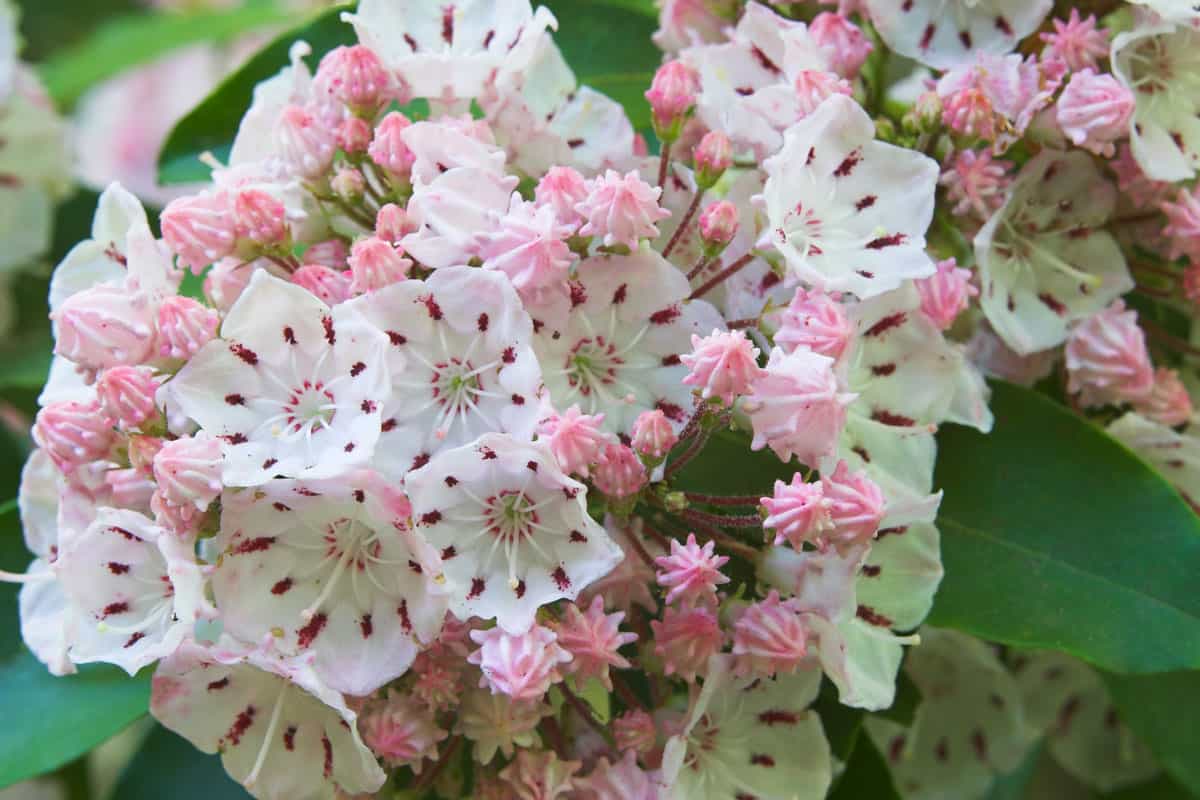 This depends on your garden for those wondering how far they need to trim a laurel. Typically, you don't need to shape a laurel too extremely, so 2-3 inches of pruning should be sufficient.

According to Laurel Hedging, you can also take a "harder" approach by trimming your shrub down to its stump if necessary, as it should grow back in the spring.

Again, we don't find doing this necessary, but if you want to start fresh with a smaller, less woody laurel in the springtime, feel free to go further with your pruning.

In contrast, it's also okay to shape a laurel throughout the year to maintain your desired shape.

Considering this is a hedge we're talking about, don't be afraid to grab a pair of shears and cut your laurel to your desired hedge shape.

How Fast Does Laurel Grow? 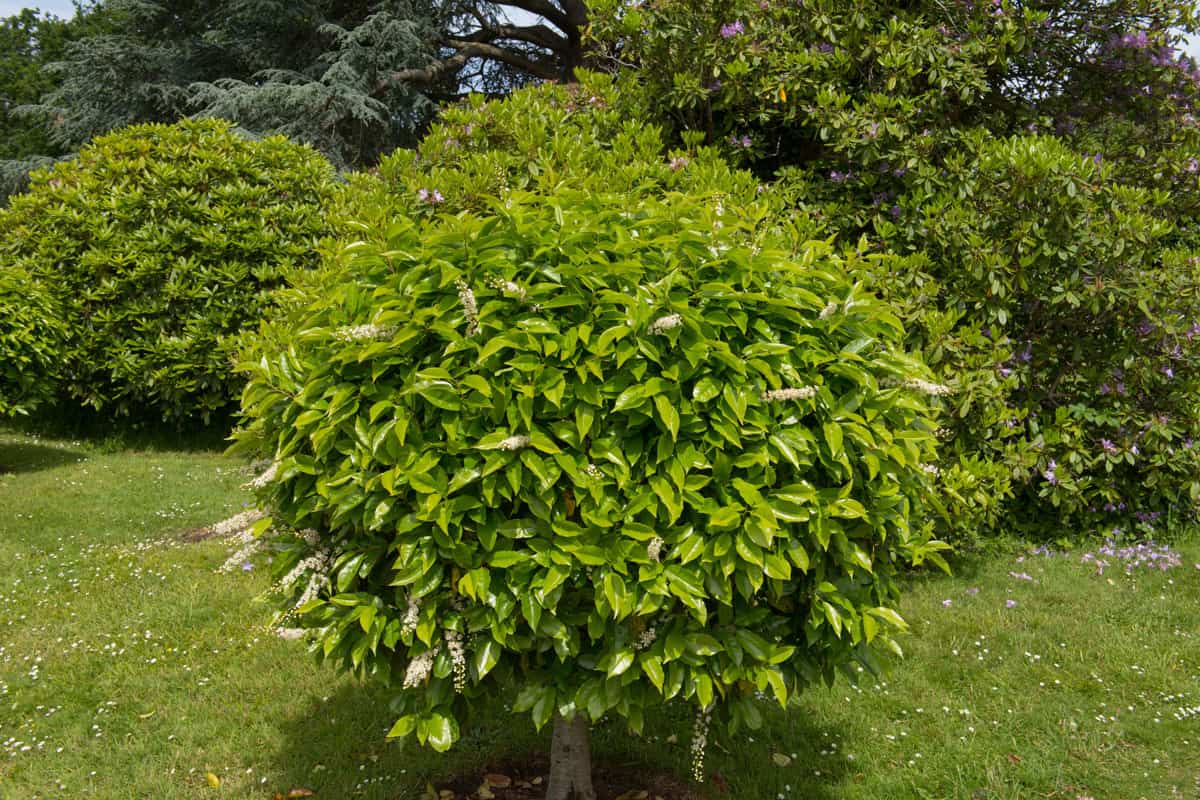 You can generally expect a laurel to grow under a foot each year. As we mentioned earlier, this flowering shrub won't grow too much annually, so pruning isn't always needed.

With that said, if you don't cut back a laurel as it grows, you could end up with a 12-15 foot bush once it's mature, so these can get pretty big.

Of course, most people won't see their laurel become more than ten feet tall for over a decade, so this will take patience.

It may even be worth keeping your laurel at a moderate size and trimming it back each year to ensure it remains lush and full.

Sometimes, letting mother nature take control can mean a leggy laurel in your yard, which won't look as good as the one you manicure.

Again, this all depends on your garden, growing habits, and aesthetics.

How Can I Make A Laurel Grow Faster?

If waiting ten years for your laurel to mature sounds unbearable, there are some ways to speed up the process. Generally, you will want to maintain a pruning schedule for your plant, trimming it back a couple of inches each year.

On top of that, applying a natural, organic fertilizer to your plant will also get things moving. According to Hopes Grove Nurseries, cutting your laurel back as much as 1/4 of an inch annually or bi-annually and then fertilizing seems to be the best option.

Typically, fertilizing and pruning a plant will encourage new growth, which is the same for a laurel.

You also want to ensure your laurel is in the sun and gets plenty of water. Even with trimming and fertilizing, growing a flowering shrub in the shade, or forgetting to water, can lead to slower growth.

In addition, it might be worth it to add fresh soil to your laurel plant once or twice each year. Ideally, try to do this before spring, so your shrub returns to new, nutrient-packed dirt.

This plant food has a continuous release formula, works for laurels, goes right onto the soil, feeds for up to two months, and won't burn your plant's roots.

How Often Should You Water Laurel? 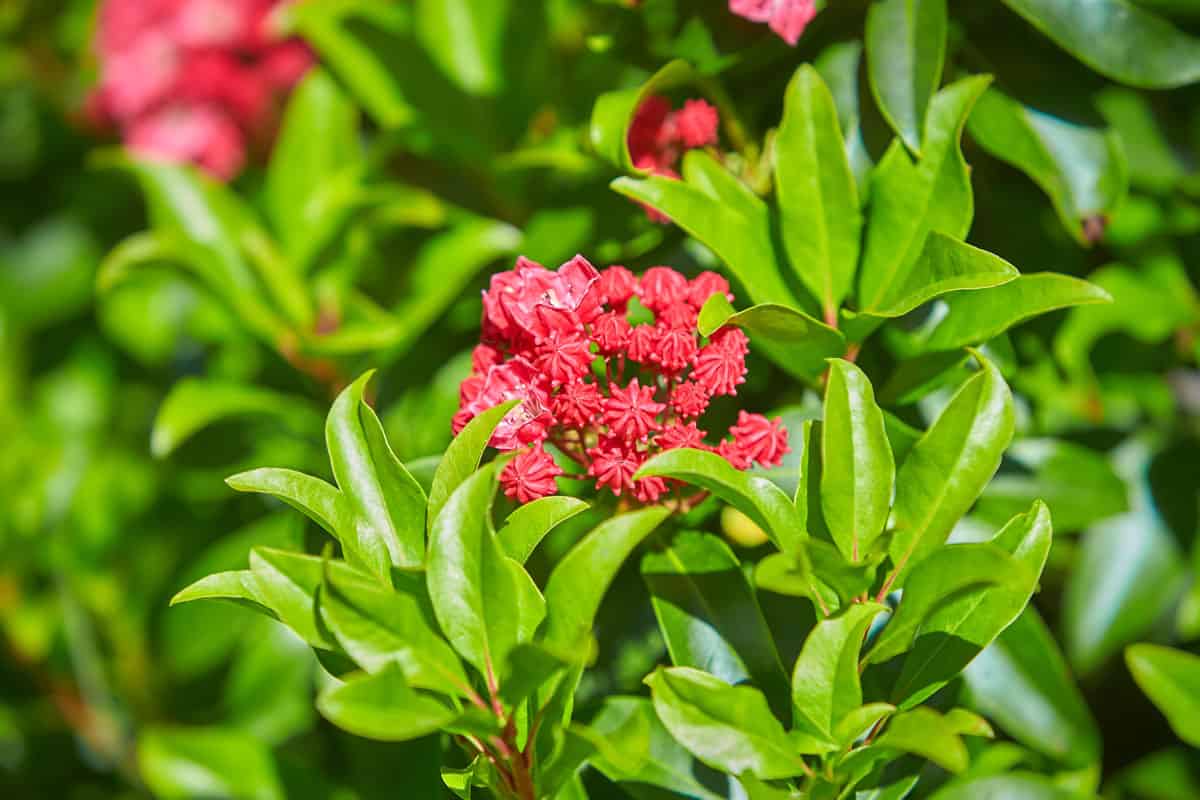 Depending on how young a laurel is, you'll need to adjust your watering schedule accordingly. For newly planted shrubs, give your laurel some water every day for about one week.

After that, you can phase out to around two waterings weekly for the first few months.

Once your laurel becomes more mature, you can cut back to every ten days. Most times, laurels won't mind a little extra water if it's hot or dry outside, so keep that in mind.

This Old House recommends adding 3-4 inches of mulch around the base of your laurels, so it can hold moisture better between watering, so that's a great idea to try.

Especially if you live somewhere dry and hot in the summer, using mulch to retain moisture in the soil can save you money on water and is an easy way to help the planet.

To Finish Things Up 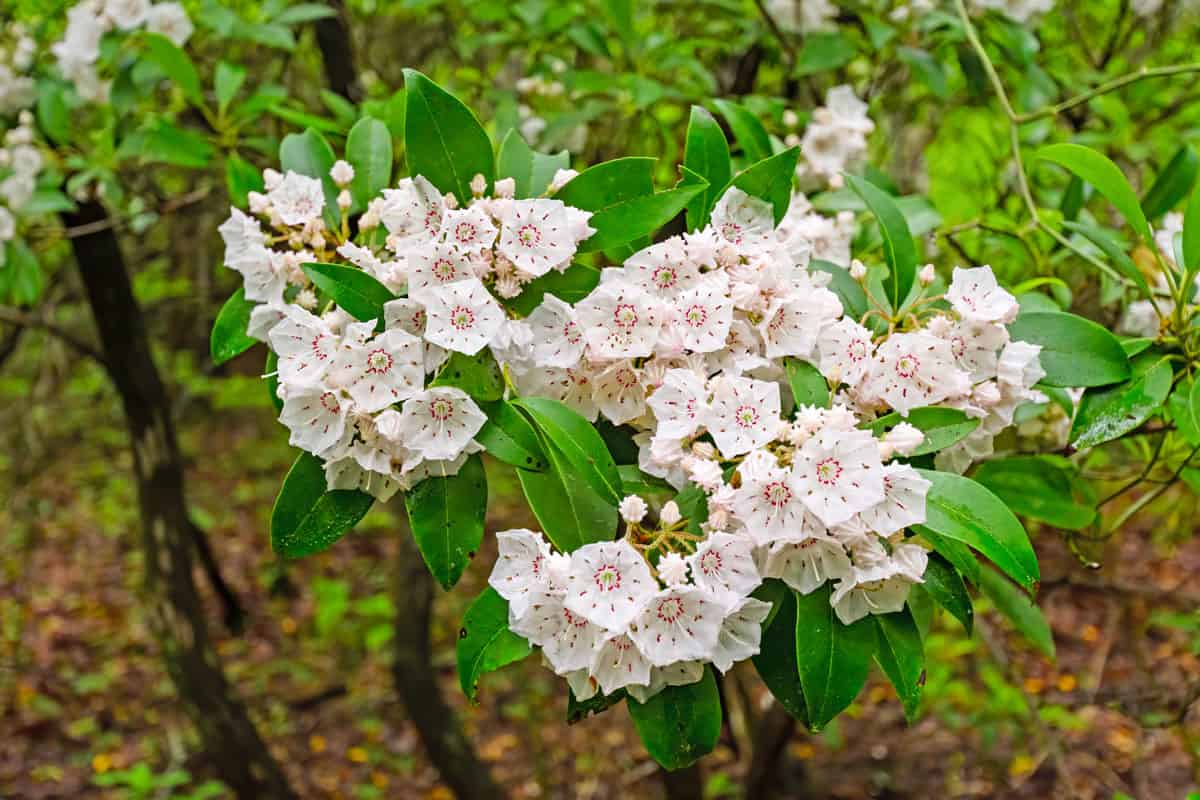 Whether you have laurels growing in your garden or want to plant them, it's imperative to know their pruning schedule. From what we found, you don't need to prune or deadhead laurel often, so focus on doing this once annually.

Furthermore, you can pinch dead flowers from your shrub as needed or use a sharp pair of scissors. The key here is being gentle and removing as few flowers as possible during the blooming period.

Regardless, it's also important to shape a laurel if you want to have it grow thicker while skipping this can result in a leggy plant long-term.

Can Peonies Grow In Shade? [How Much Sun Do They Need?]

Should You Deadhead Amaryllis? [And How To]

Dahlia Buds Not Opening? Here's What To Do