Peonies are a garden treasure. They are one of the best-known and most dearly-loved perennials with their beautiful pink blooms, intoxicating fragrance, trouble-free nature and penchant for longevity. With the fall season nearly upon us, you may be wondering to yourself, ‘when should peonies be cut back and how is it done?’

Herbaceous peonies die back naturally in the fall and regrow again in the spring. Cutting back the dead stems to the ground is a once-a-year task, done in autumn after the first frost has killed the leaves. The purpose of cutting back at this time is to stop insects and disease from harming the plant and to clear the garden grounds, keeping the area looking neat and tidy. End-of-season pruning is easy to do and goes a long way in maintaining the plant for future growing seasons.

Now that you know peonies require maintenance in the fall, let’s take a closer look at when to cut them back and the proper way to do this. We will also discuss whether or not you can cut back peonies after they bloom and what gardeners have to say about the pruning process in general. So, if you’re ready to learn more about peonies and how to care for them year-round, then let’s get started! 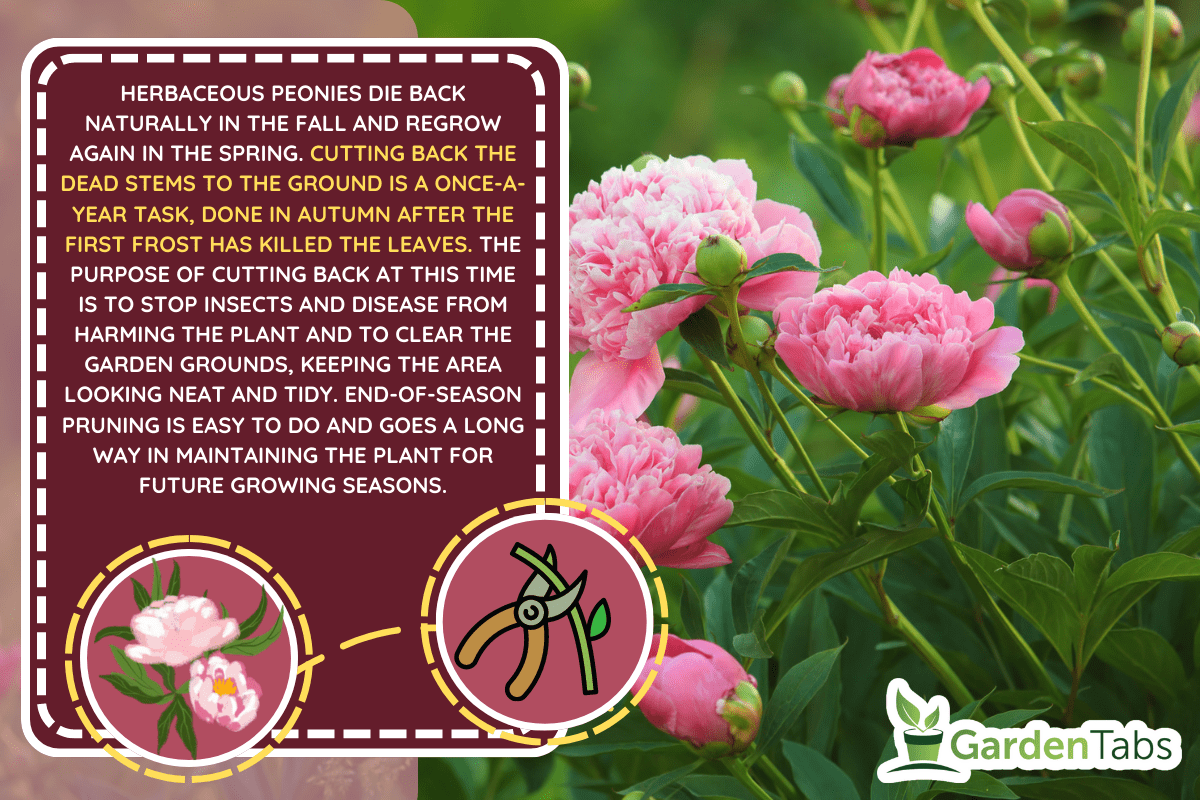 Do Peonies Need To Be Cut Back For Winter?

End-of-season pruning is vital for the health of the peony flower plant. Not only does it protect the plant from insect damage and disease, but it also ensures the return of the blooms the following spring. There are different types of peonies, each requiring specific pruning needs. Let’s take a closer look at the different species below: 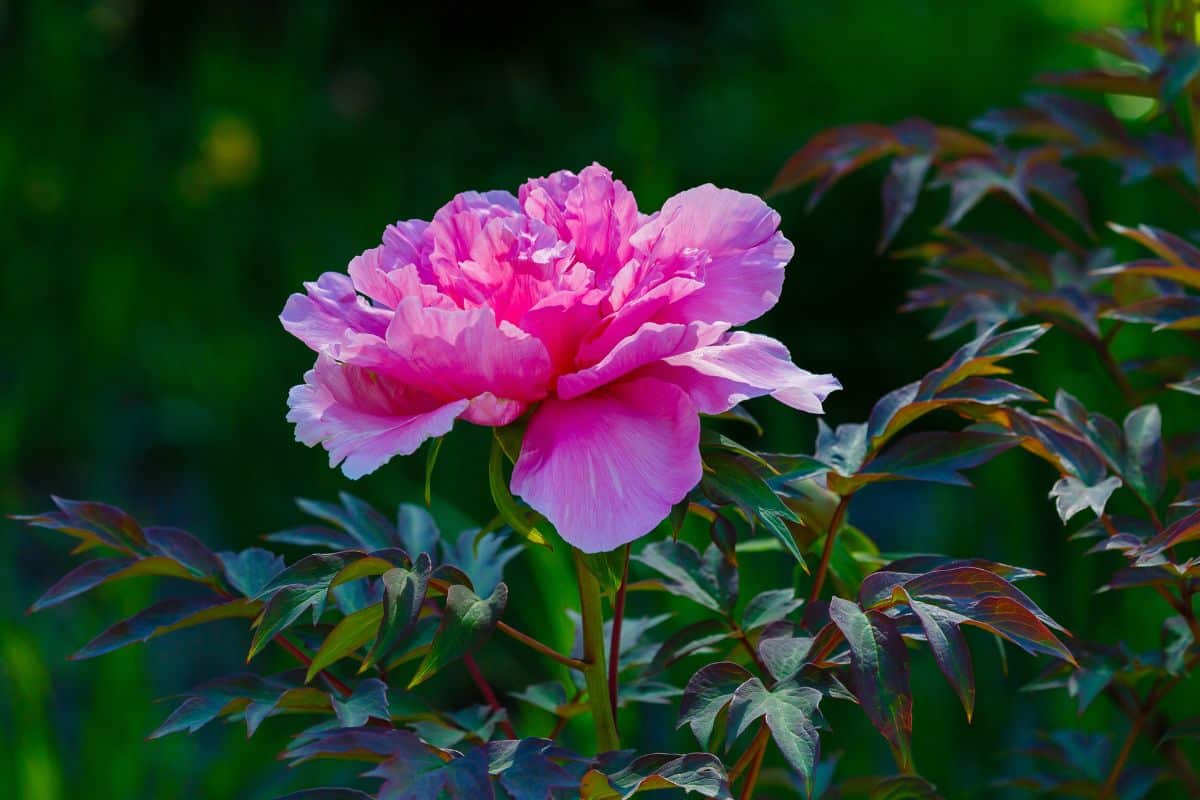 This variety of peony is most commonly found in gardens and classified as an herbaceous perennial. They have soft green stems and typically die back in fall and regrow the following spring. After the first frost, this flower should be cut back to the ground, removing any and all foliage, fallen leaves or dropped flowers to reduce the chances of disease being passed on to the next growing season.

This species of peony has woody stems and is often referred to as a deciduous shrub. They do not die back in the winter but could lose their leaves, depending on the climate. It is recommended to prune the shrub in the spring by removing any dead branches or suckers growing out of the plant’s base. This will also help control the size of the shrub and maintain a nicely rounded shape. 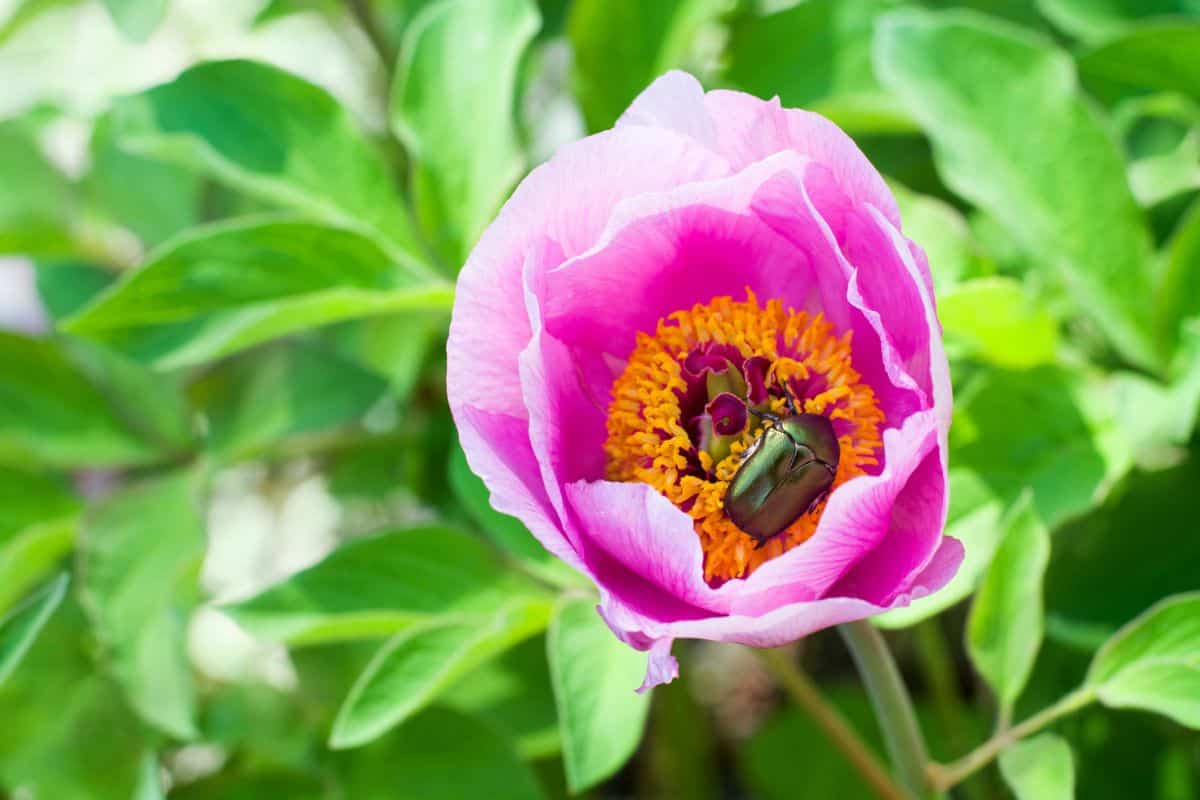 This type of flower is a hybrid cross between an herbaceous peony and a tree peony. It grows like the herbaceous type yet blooms similar to the tree variety. Intersectional peonies should be pruned the same way as their herbaceous cousin, cutting them all the way to the ground in autumn while removing any foliage or ground cover that still remains.

When To Cut Back Peonies For The Winter?

Cut back peonies once the plant starts to yellow or turn brown. This usually occurs in early fall or after the first frost, sometime in late September or the beginning of October. Cutting peonies in autumn removes any lingering foliar diseases and reduces the risk of infection the following year.

In regions where winter temperatures are severely cold, it is recommended to add some very loose mulch (such as pine needles or shredded bark) to the area after pruning and then remove it prior to spring in late March or early April. These areas also tend to get colder earlier in the year and will likely require cutting back sooner, such as mid to late September.

Can You Cut Back Peonies After They Bloom? 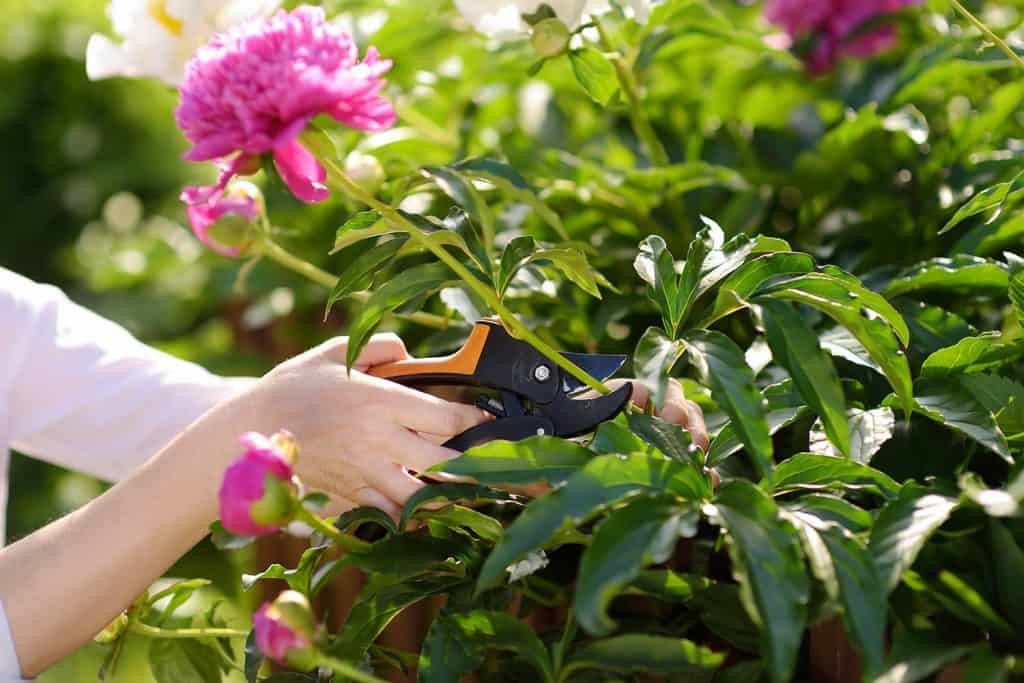 It is okay to trim away the dead peony blooms, but be sure to leave the foliage intact. The plant requires every leaf for regrowth the following year. Unlike other perennials, deadheading will not encourage a second round of blooms. It is still recommended, however, as overblown blooms turn brown quickly and take away from the beauty of the plant.

How Do You Winterize Peonies? 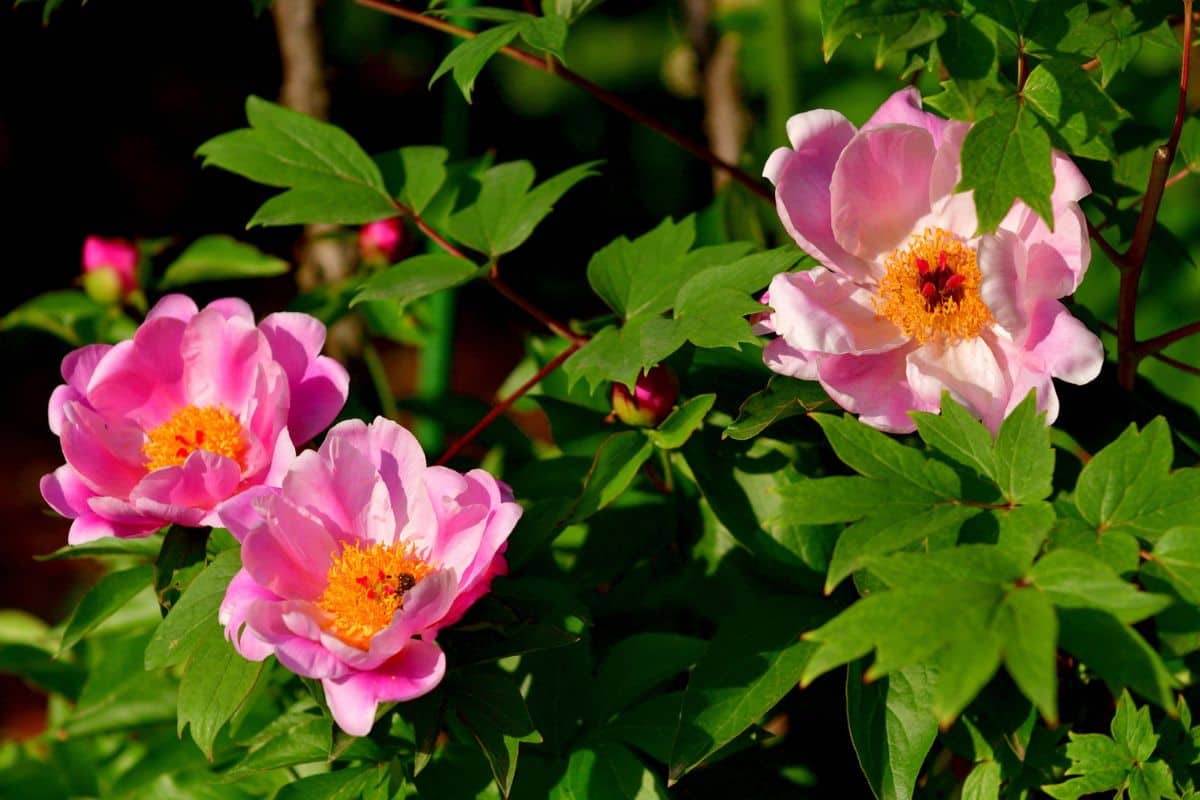 To properly winterize peonies, you need to do the following:

To Prune or Not?

Now would be a good time to mention that some gardeners believe there is never a need to prune or cut back peonies. They just let nature take its course and simply allow the leaves to deteriorate in the peony garden. These same gardeners also don’t believe in deadheading either, saying it has little effect on the plant’s health.

Other gardeners, however, disagree and are in favor of pruning and end-of-season cutting back. They believe it goes a long way in protecting the plant from disease and insect infestation. They also advocate deadheading, arguing that it not only improves the appearance of the plant but also allows it to focus its energy on healthy leaf and root growth rather than seed production.

The final decision, however, is yours to make. However, for the purpose of this article, we argue in favor of cutting back. We believe it does maintain a healthy plant by providing both pest control as well as promoting new and healthy regrowth the following year.

A Healthy Peony Plant Will Last for Years 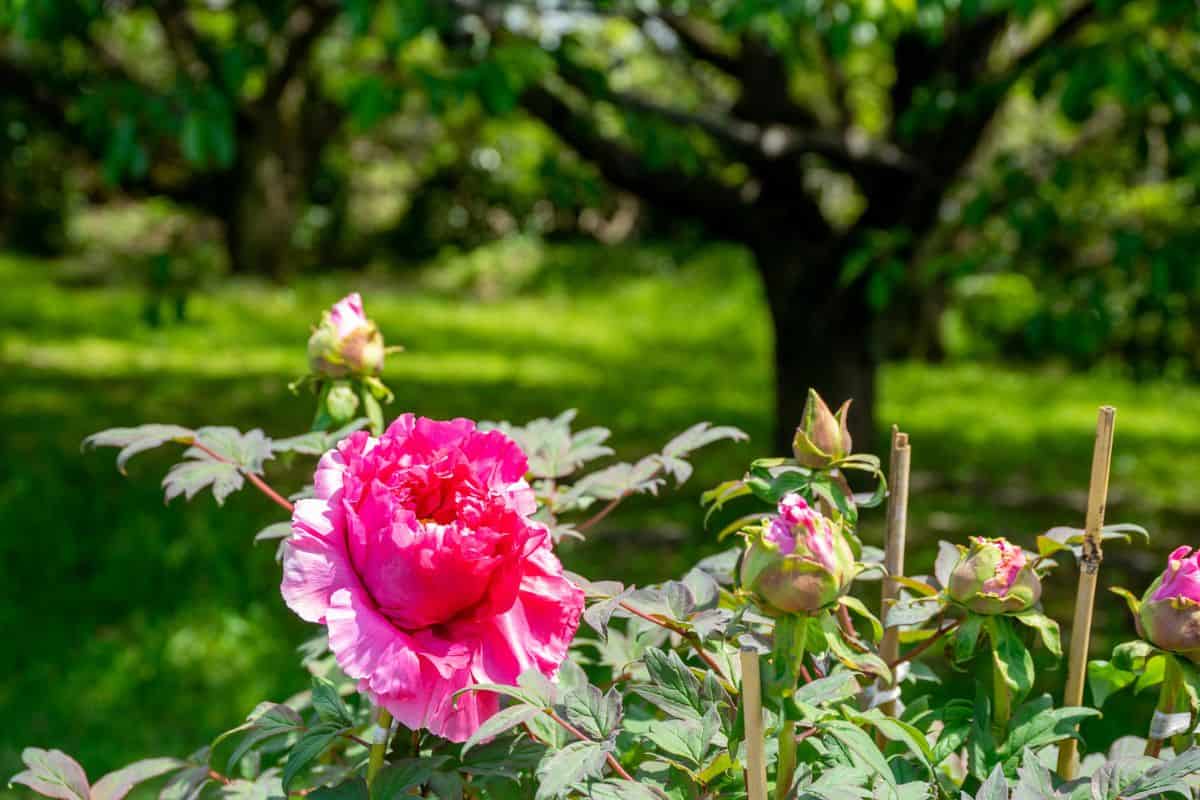 A healthy peony plant can live up to 100 years or more! These hardy perennials require only moderate pruning, if at all. Deciding whether or not to prune peonies is a personal choice, but the practice will aid in maintaining (and possibly improving) the overall health of the plant. Good luck, fellow hobbyists and happy gardening!

If you love peonies, we think you'll find these guides interesting too -

When Do Peonies Bloom (and For How Long)?

16 Peony Companion Plants that will look great in your garden

How to Grow a Bowl of Beauty Peony