Finding new ways to enjoy the plants in your garden can be a great thing. Do you have silver maple trees growing, and you're wondering if you can gather syrup from them? Is it possible to tap a silver maple tree? How much syrup do these trees usually make?

We'll answer these questions and many others throughout this post. Let's dive in!

Although the silver maple won't produce tons of syrup, you can still tap it. Generally, silver maple trees can be tapped once they're old enough to make syrup, although the sap is more watery/thin and has low sugar content.

Compared to sugar maple, silver maple syrup is not too sweet, but again, this can be a fun project and a way to source your own syrup/sap.

As we start this article, we will cover all things silver maple trees and discuss whether you can tap one or not. If you have these beautiful trees in your garden, want to plant one, or have other maple-related questions, you're at the right post. With that said, let's get right into it! 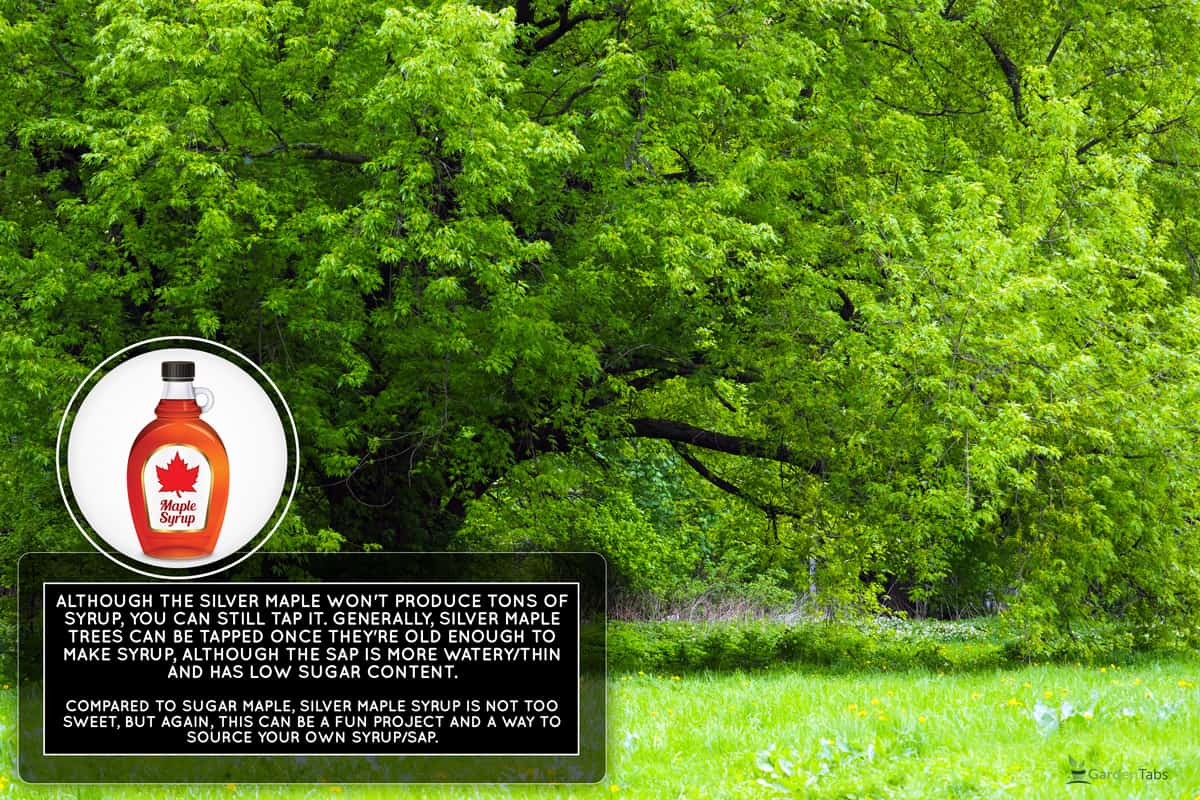 Can You Collect Syrup From A Silver Maple Tree? 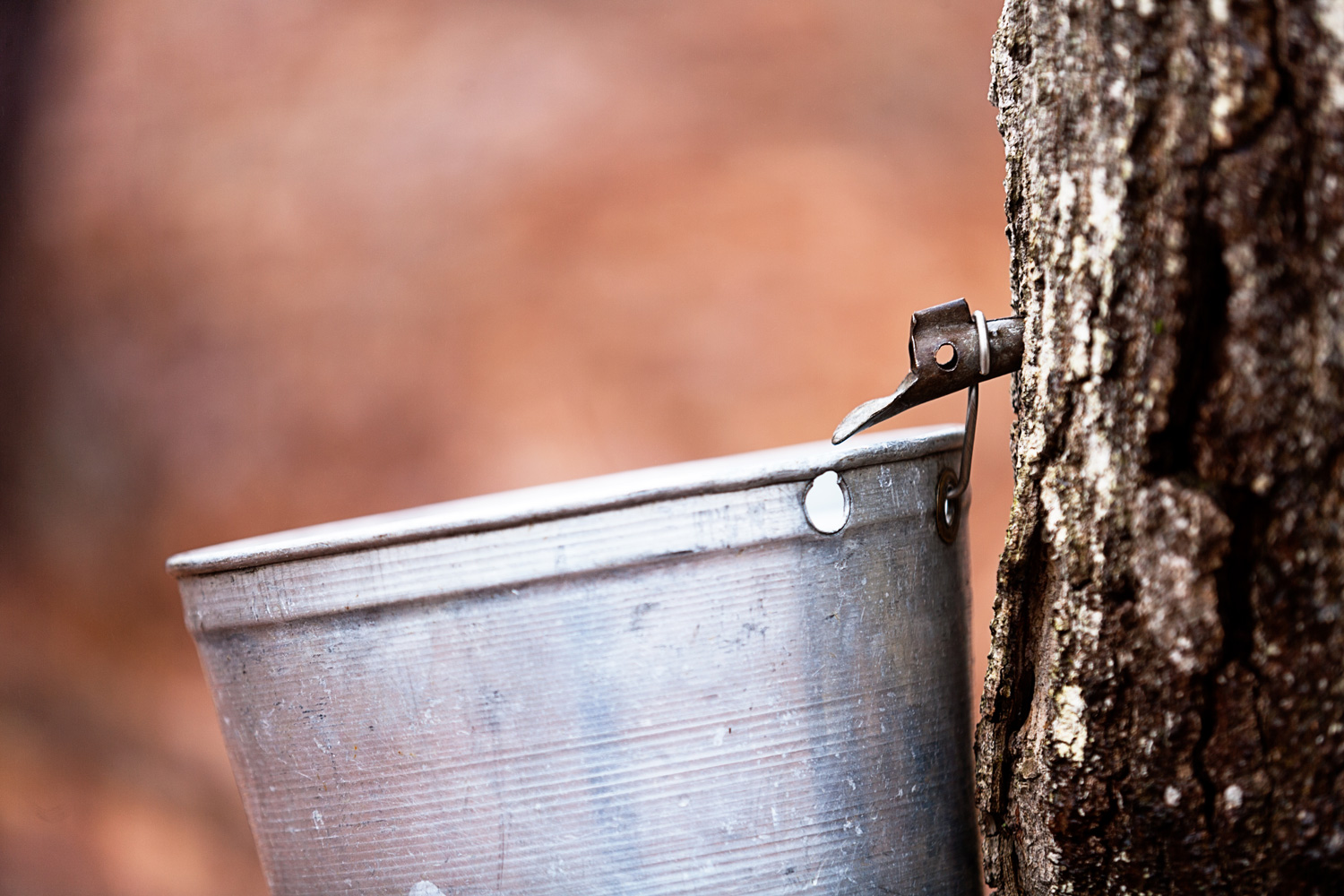 Yes. You can typically gather syrup from all types of maple trees, including silver varieties. However, silver maples don't produce as thick or sweet syrup as other varieties, so they aren't usually fan favorites.

With that said, you can tap a silver maple as it matures, collecting the sap for your next breakfast.

According to experts, silver maple trees produce a watery sap with less sugar than other varieties. So, unlike a sugar maple, your silver maple syrup won't be as thick or delicious in flavor.

However, that isn't always bad, as some people prefer a softer syrup for their food. Tapping a maple is a fun project and is a great way to see the wonders of a maple tree.

Is It Worth Tapping A Silver Maple?

Although the sap from a silver maple won't be as good as other varieties, we agree it's still worth tapping. Learning to collect its syrup is a great skill to develop regardless of your maple.

On top of that, your silver maple will produce syrup either way, so why not enjoy it? As we said above, the syrup from a silver maple tree has less sugar than other varieties, which makes it a bit healthier.

So, if you still want to enjoy a stack of pancakes but don't love the idea of high-sugar syrup, a silver maple may be your silver lining.

Again, we don't recommend starting a syrup company using silver maple sap, but for your own enjoyment, we think it's a great starting point.

How Much Sap Will A Silver Maple Produce? 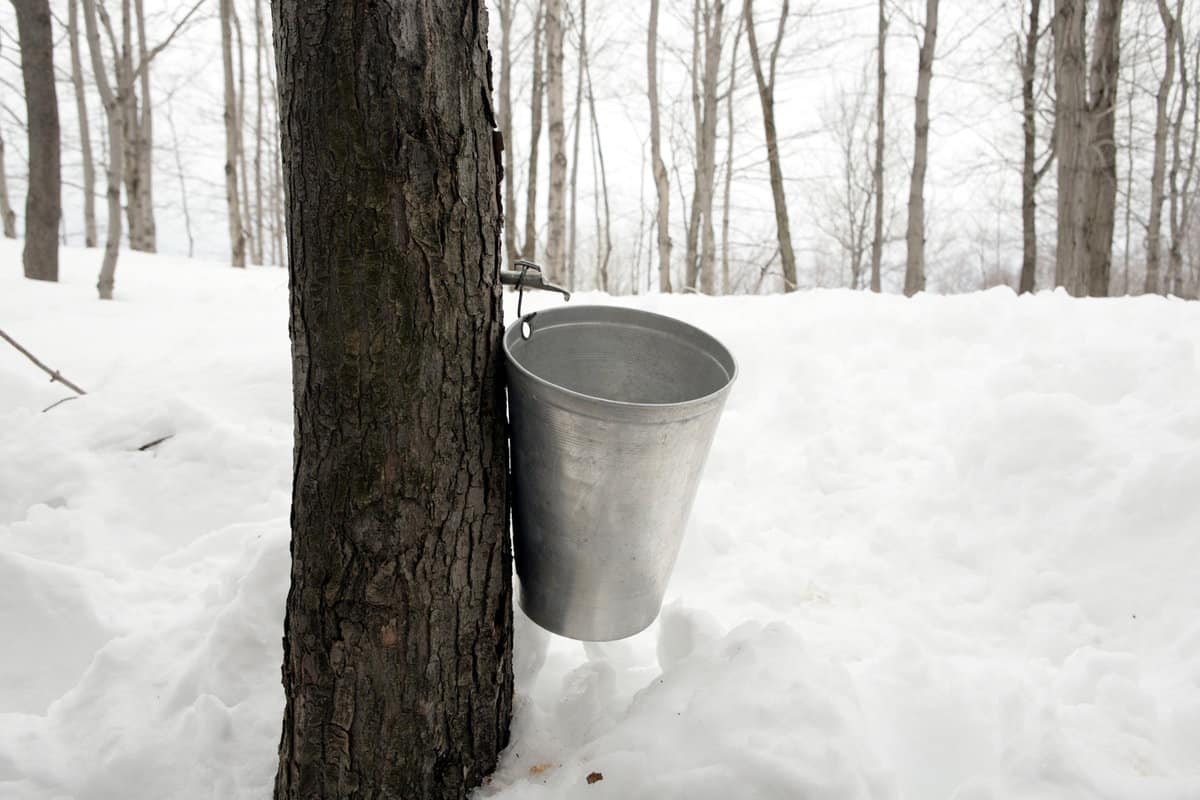 Now that you know you can collect the sap/syrup from your silver maple, it's always good to know how much you can expect from your tree.

Generally, you can't always expect a certain amount of sap to come from a silver maple, so this will be different for everyone. According to MapleResearch.org, collecting sap from 59 silver maples collected roughly 1925.3 liters for the season.

That comes to around 32.6 liters per silver maple and roughly 23.5 liters per tap. Their most successful silver maple tree made 141.9 liters of sap, so this varies by the tree.

One thing to remember is that you need 40 gallons of sap to make one gallon of syrup. So, even if your tree produces a good amount of sap each day or week, you'll need a significant amount for syrup-making.

A common misconception is that ready-to-eat syrup comes from maple trees.

Unfortunately, this is not true, as you need to boil the sap from your maple and concentrate it into a thicker, sweeter final formula.

Furthermore, silver maples have less sugar than regular sugar maples, so you could need more gallons to create an edible container of syrup.

Can I Boil Silver Maple Sap In My House?

We don't recommend doing this indoors if you want to collect the sap from your silver maple and turn it into syrup. Even though boiling sap is relatively safe, it can produce excess amounts of steam, which can quickly fill your kitchen.

Therefore, you might want to boil your silver maple sap outside, moving it indoors once the steam settles. Most syrup-making occurs in large factories where ventilation isn't an issue, so for everyday syrup makers, we suggest the outdoors.

However, if you want to do this inside, we recommend only making small batches at a time. If you're only boiling a small pot of maple sap, there isn't as much chance of problems.

According to Tap My Trees, boiling too much maple sap at a time can lead to your wallpaper peeling, so this is no joke.

How Long Before A Silver Maple Makes Sap? 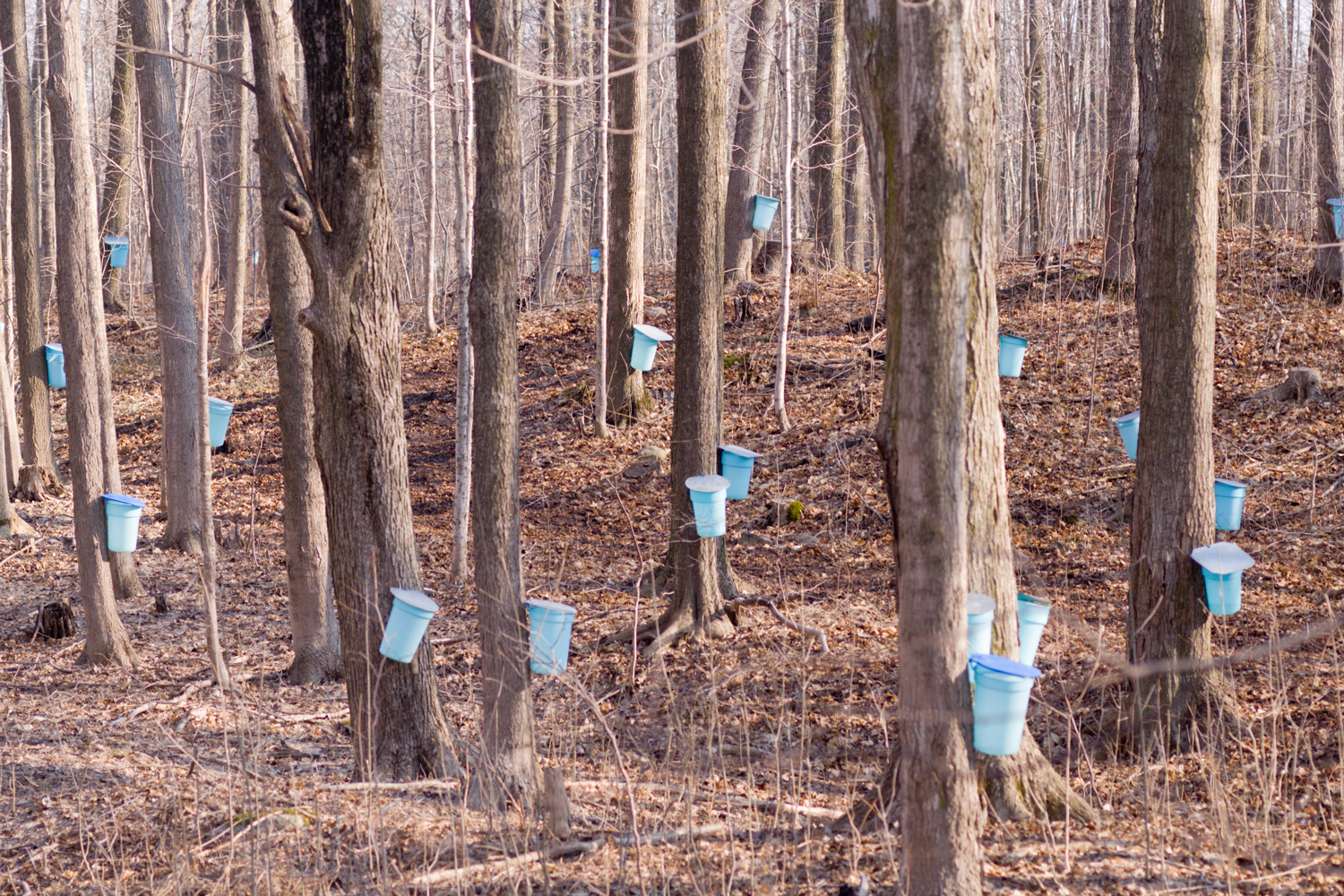 You can generally expect a maple tree to start producing sap after a few years of growth. Once your tree begins to make its sap, you can collect it between mid-February and mid-March.

However, this timeframe will vary depending on your tree and the weather.

Usually, a maple tree won't begin dripping with sap until the temperatures reach above freezing (32 degrees Fahrenheit) during the day and then fall below freezing at night.

According to Penn State Extension, maple trees typically produce their sap for 4-6 weeks. During this period, you can collect the sap from your silver maple and choose to boil it for syrup.

So, if you want to gather your silver maple's sap, you only have about a month or so for this.

Which Maple Tree Is Best For Tapping?

Although virtually all maple trees can be tapped, some are better for this. Generally, sugar maples will produce the best sap for syrup-making, as it's thick and sweet.

Furthermore, you can collect sap from black, red, and silver maple and box elder trees, although sugar maples come in on top.

As we said, you will need to boil the sap from your maple, often needing many gallons for a usable few bottles, so this takes time.

The consistency of maple sap also plays a big role in how well your syrup will turn out, so your tree's variety can make a difference.

Forty gallons of maple sap will typically yield one gallon of real syrup for your food, so this takes a lot of sap, boiling, and patience. Now we know why everyone isn't tapping their maple tree.

How Big Does A Silver Maple Tree Get?

A silver maple tree should reach heights between 50 and 80 feet once fully mature. Like many maples, your silver variety will become quite big and boast gorgeous color-changing foliage for the fall season.

On top of such a major height, your silver maple's spread will also be impressive. You can usually expect a silver maple tree to be around 50 feet in either direction once mature, which is perfect for larger open gardens.

Especially if you want to tap a silver maple, a larger tree will require multiple collection containers. Since your tree will become so massive, it's safe to assume you'll also get plenty of sap during the early spring, which you can boil into syrup.

Silver maples are one of the blander maple varieties, as they showcase green and silver leaves through the warmer seasons and then turn yellowish brown in the fall.

So, we don't recommend planting a silver species if you want a showy, red, or orange maple.

One of the benefits of growing a silver maple tree is that this variety has a fairly quick growth rate. Typically, a silver maple will grow at a rate of 24 inches per year, which is pretty fast for maples.

One drawback of this faster growth rate is that silver maples tend to become top-heavy, with some branches unable to withstand wind, leaf weight, or everyday activity.

Some experts claim healthy silver maples in ideal growing conditions may see growth of over three feet annually, so again, this is a great tree for eager gardeners.

Maple trees aren't always this quick to mature, so if you want one that will produce sap faster and fill out your yard, we recommend a silver variety.

How Long Does It Take For A Maple Tree To Mature? 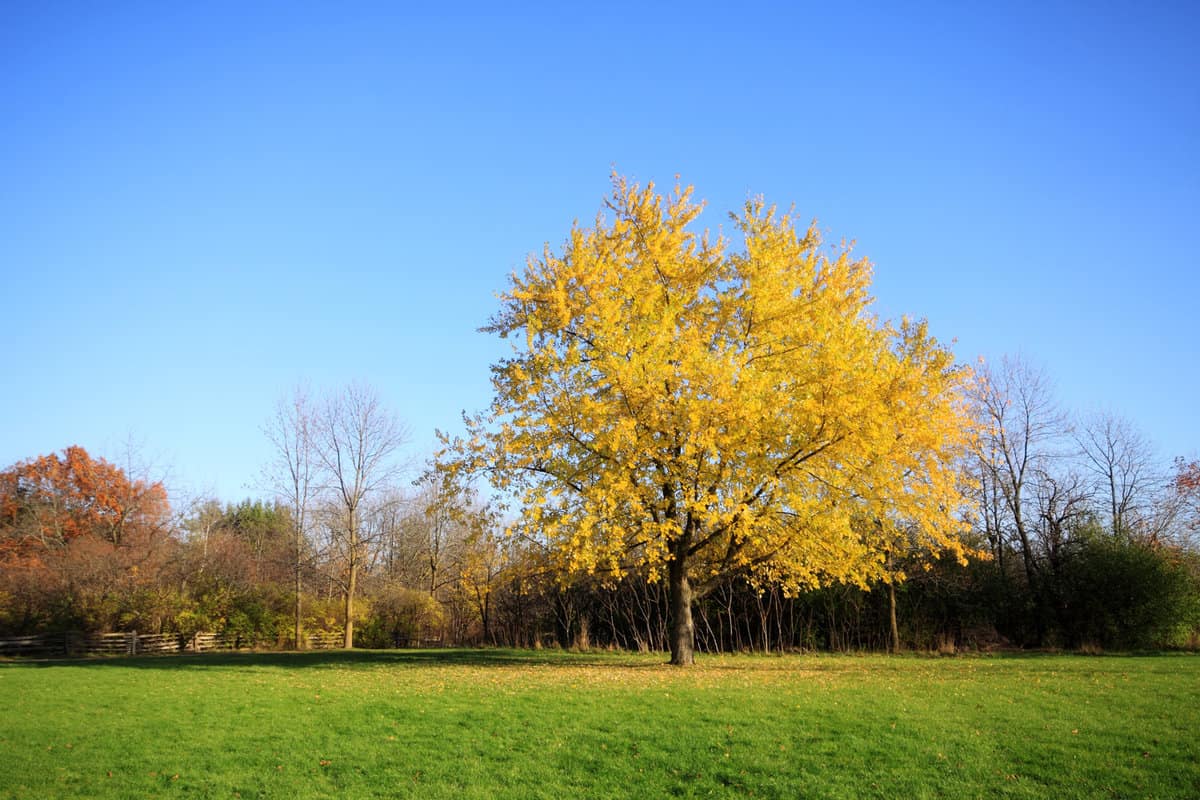 Depending on your maple variety, it could be more than 20-30 years before your tree reaches maturity. As we said above, silver maples are one of the faster-growing maple varieties, so they'll mature in about 15 years on average.

On the other hand, a Japanese maple tree is one of the slower-growing varieties in this species, often taking upwards of 25-30 years to reach its full size.

Red maples are also a bit slower to grow, taking nearly 70 years to reach their final height. It's common for maples to slow down as they age, often producing less sap and foliage.

Luckily with the silver maple, this shouldn't be an issue, hence why they're so popular.

Whether you have a silver maple tree in your yard or want to plant one, it's always good to know whether you can tap it or not. From what we found, a silver maple can be tapped for sap collecting, although it won't produce as high-quality syrup as a sugar maple.

Generally, silver maples grow quickly, meaning you can start collecting sap from them after a year or two. In addition, your silver maple will become around 50-80 feet tall and about 50 feet across, so make sure to give it plenty of space in your garden.

And, if you want to boil your maple sap, try and keep it outdoors!

Made it to the end? Check out these helpful related garden posts below:

Japanese Maple Is Half Green, Half Red - Why? Is Something Wrong?

What To Plant Under Maple Trees [Inc. Japanese Maple]

How Hardy Are Maple Trees, And Which Zones Are They Right For?