If you’ve ever enjoyed a delicious rhubarb pie and considered growing rhubarb in your own garden, you might be wondering if you can grow it from a stalk. Well, we’ve done the research and are ready to share everything we’ve learned about whether rhubarb can be grown from a stalk.

Unfortunately, it is almost impossible to grow rhubarb from a stalk. Rhubarb has a hard time retaining moisture after it is cut, which makes it difficult for it to grow new roots. However, you can easily grow a new rhubarb plant from a small section of the roots of a larger plant.

Don’t worry, though—there are other easy and more effective ways to grow a rhubarb plant, and we’ll tell you how in this article. We’ll also explain in more detail why it is hard to grow rhubarb from a stalk. Let’s get started!

Why Can't I Grow Rhubarb From A Stalk?

Harvesting rhubarb involves removing both the leaves at the top of the plant (they’re very toxic!) and the roots at the bottom, leaving raw edges at both ends that cannot hold in the plant’s moisture. Plus, its thin, delicate skin does not provide a good barrier between the plant’s insides and the drying effects of air.

For these reasons, rhubarb dries out quickly after harvest unless it is kept submerged in water or completely wrapped in plastic. 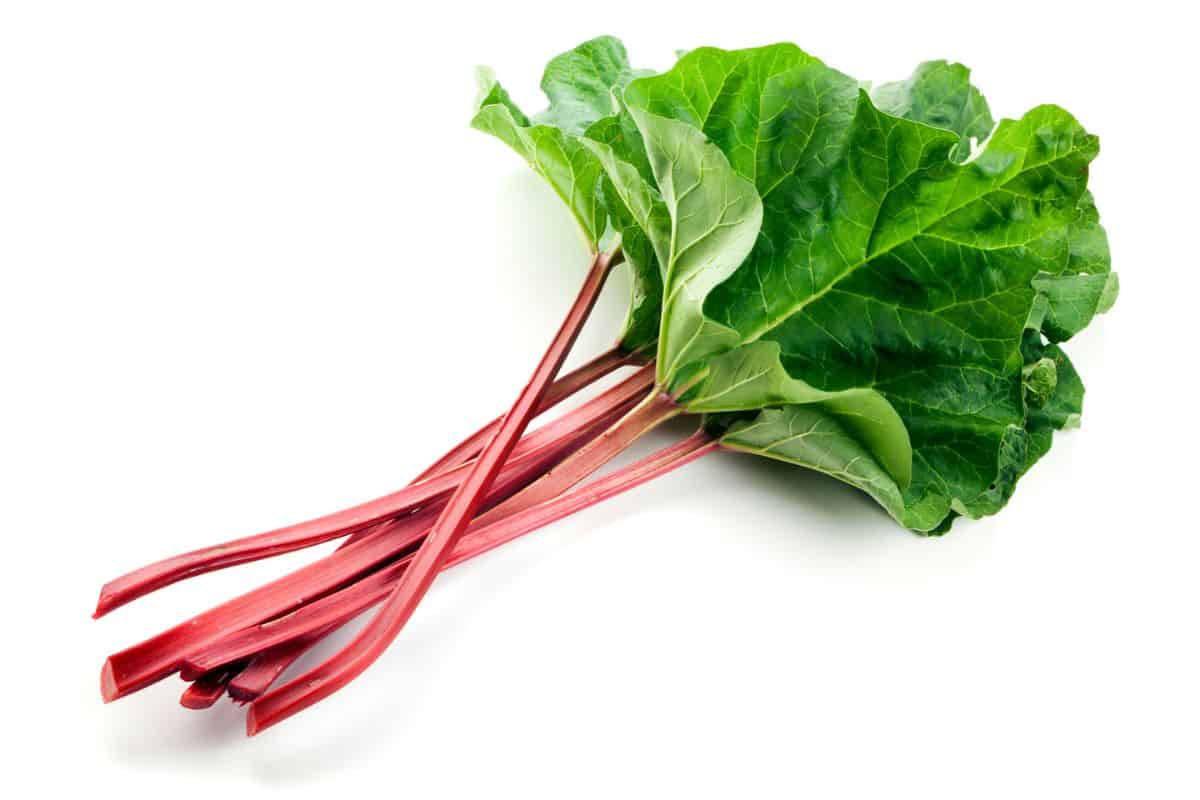 Clearly, neither of these moisture-retaining methods will work if you’re trying to grow rhubarb from a stalk. Even if you keep the leaves on your rhubarb stalks, they won’t retain enough moisture to support the growth of roots.

However, if you’d like to try your hand at growing a different vegetable from a cutting, take a look at this post: How To Grow Kale From Grocery Store Cuttings

How To Grow Rhubarb From A Plant Division

The easiest way to grow a new rhubarb plant is planting a section taken from the root crown of an existing rhubarb plant.

How To Grow Rhubarb From Seeds

Another great way to grow rhubarb is from seed. It’s a little more challenging than growing it from crown divisions, but it’s a good option if you’re unable to get divisions. However, keep in mind that rhubarb seeds are unpredictable, so you might not end up with the exact variety that was advertised.

How To Grow Rhubarb In A Pot

Even though rhubarb is typically grown directly in the ground, it also does well in containers. Consider this option if no place in your garden receives consistent, direct sunlight, because it would enable you to move your rhubarb plant to follow the sun.

It’s also a good idea if you have a small space or are confined to growing on a porch or balcony.

How To Harvest Rhubarb

Wait to harvest your rhubarb until it has been growing for one year. This gives the roots enough time to grow deep and fully establish the plant without the additional stress of harvest. The stalks will also be larger after the first year, giving you more to work with for delicious pies, jellies, and compotes! 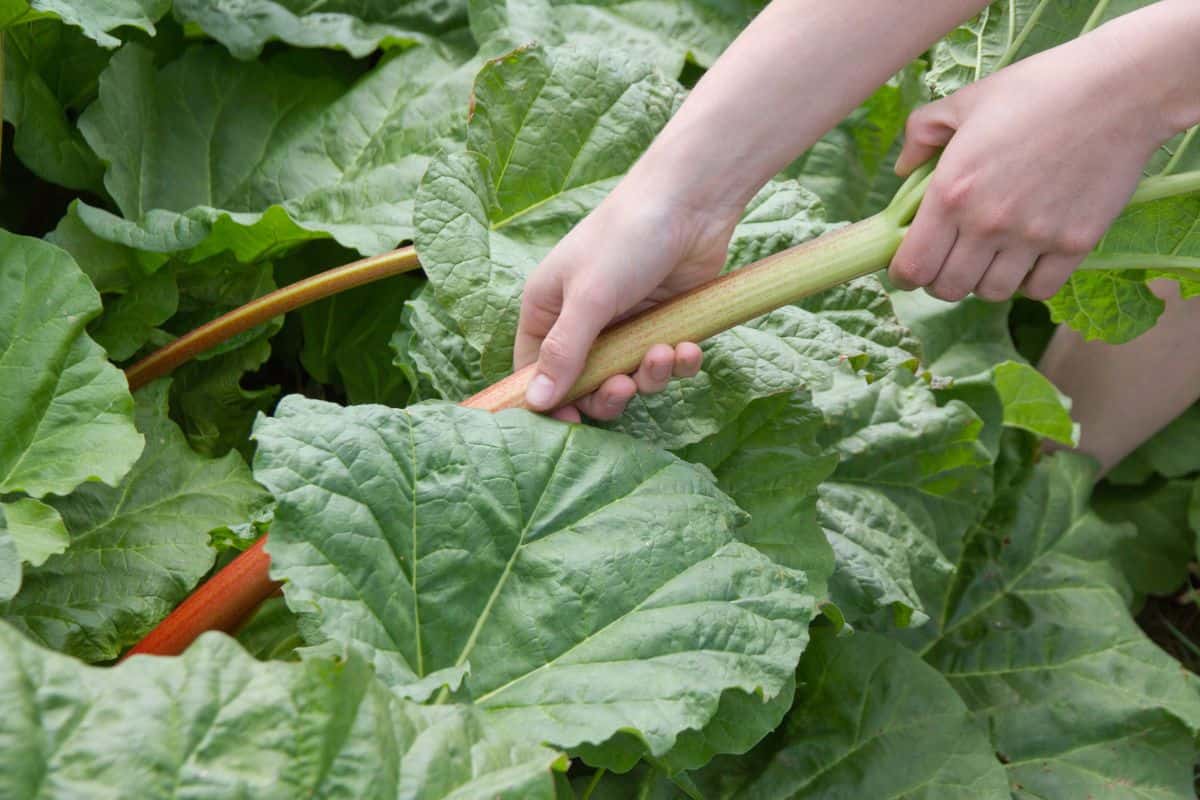 It might seem counterintuitive, but you should not cut your rhubarb stalks with a knife or scissors. Instead, harvest using the twist and pull method.

Hold the stalk firmly at the base and use your other hand to pull it off of the plant with a twisting motion. Using this method encourages more growth and prevents the transfer of disease between plants which can happen when using a knife.

Your rhubarb is ready to be harvested when the stalks reach their full length. This varies depending on the variety but can be anywhere from one to two feet long, and most plants reach this length around April or May.

Avoid harvesting more than one third of the plant’s stalks. You should stop harvesting around mid-June to allow the plants to recover their energy for the winter.

One of the most important things to remember when harvesting rhubarb is that the leaves are very toxic! You should remove them immediately after harvesting because they’ll actually make the stalks wilt more quickly.

What Should I Do If My Rhubarb Flowers? 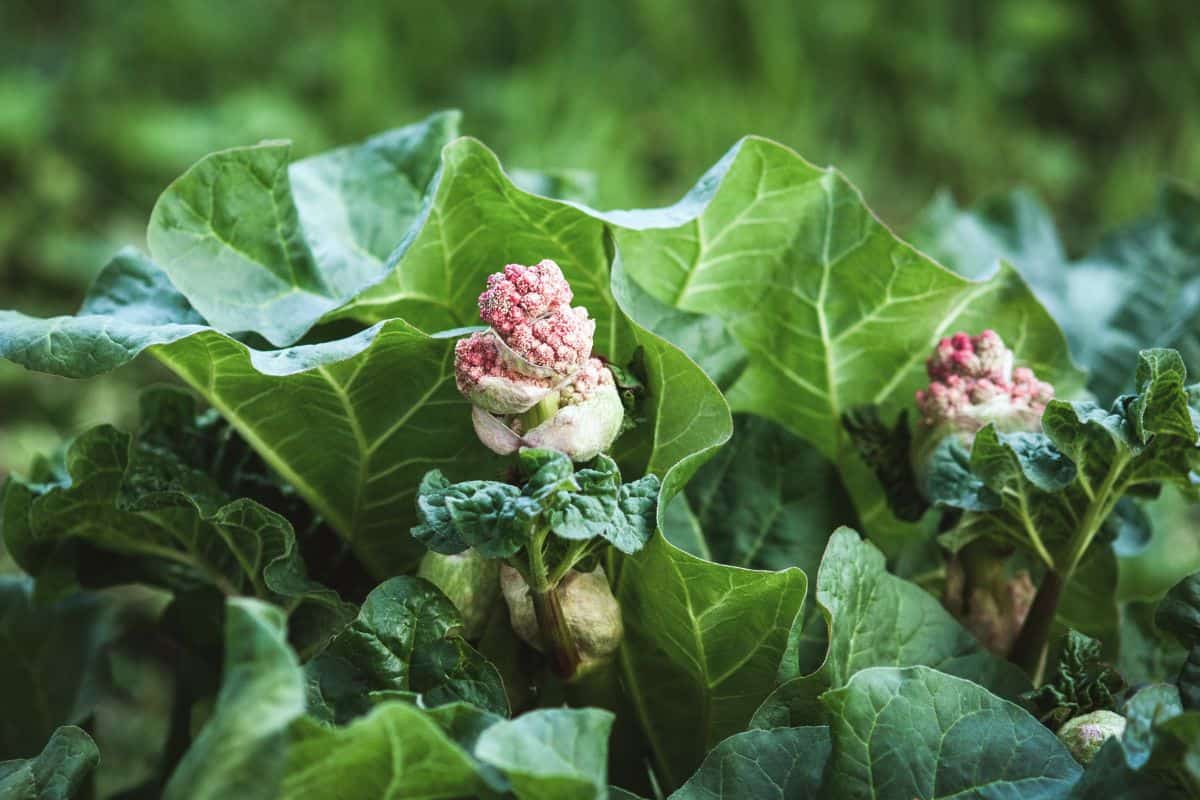 Flowering, also referred to as “bolting,” means that your rhubarb plant is preparing for reproduction by growing flowers and seeds. Since you want your rhubarb to focus its energy on growing stalks, not flowers, any flowers need to be removed immediately.

You can use a knife or pruning shears to remove rhubarb flowers. If you’re in the market for new pruning shears, check out our article Best Long-Handled Garden Shears for some ideas!

Simply cut the flower stalk off as close to the main stalk as possible. Avoid leaving a stump, which is prone to rotting and causing pest infestations. You’ll probably need to do this multiple times throughout the growing season, especially if your rhubarb plants are mature.

Rhubarb plants often flower in reaction to stressors in their environment. This can include a lack of fertilizer, prolonged heat over 90 degrees Fahrenheit, drought, and neglecting to divide the root crown every 4-5 years. Addressing any of these issues should help keep flowering at a minimum.

One upside of this situation, however, is that rhubarb flowers are beautifully unique and can be used in flower arrangements! Also, contrary to popular belief, flowering doesn’t make rhubarb stalks poisonous. You can still eat them with no worries—just avoid the leaves! 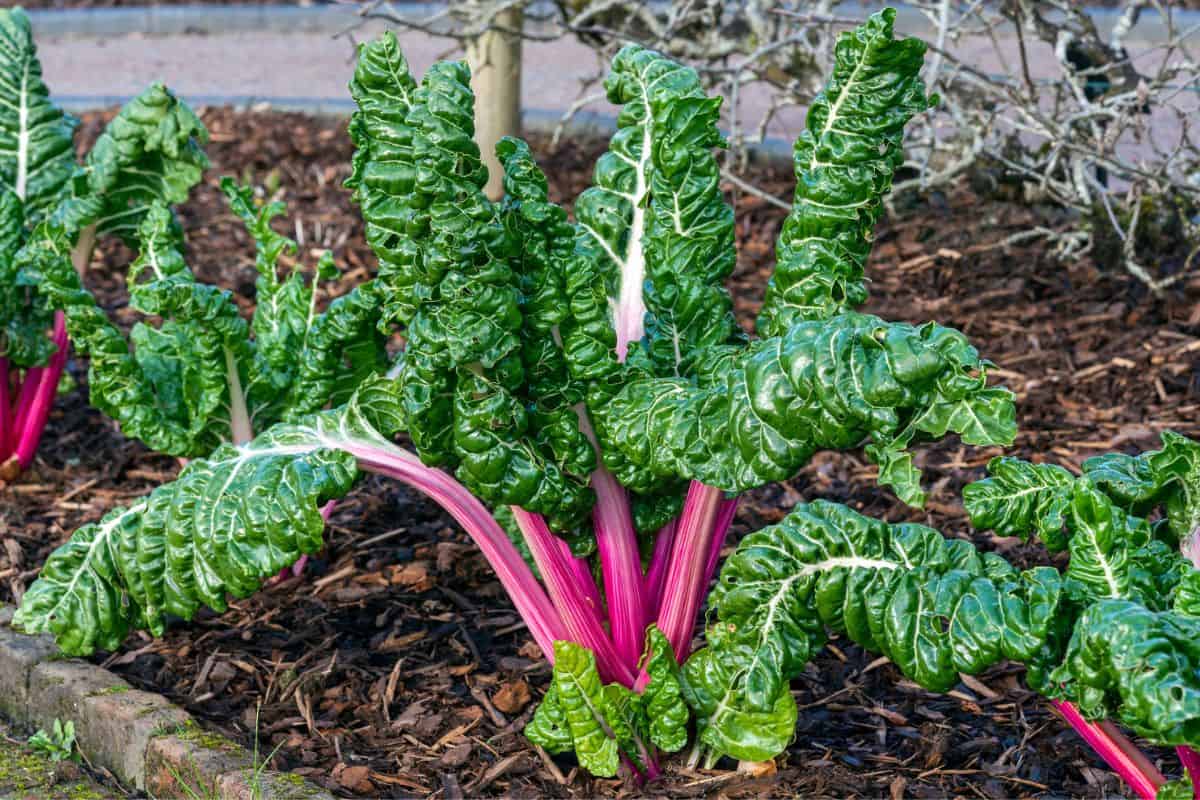 Even though you can’t grow rhubarb from stalks, there are lots of other options for growing this delicious, hardy perennial.

You can easily grow them from root crown divisions, or, with a little more effort, from seeds. We hope this article helps you on your growing journey and that you’ll be eating a fresh, homegrown rhubarb pie in no time!