Blackberries have taken off as a popular snack worldwide. It would be hard to imagine life without blackberry pie, jam, tea, and so on. This has sparked the question—can you grow a blackberry bush from a blackberry? We did the research to bring you the answer.

Should you just throw a berry into the soil? No! This post will go into more detail about the varying methods of growing a blackberry bush from a blackberry. Keep reading to discover the horticultural secrets of blackberry germination, propagation, and root division. 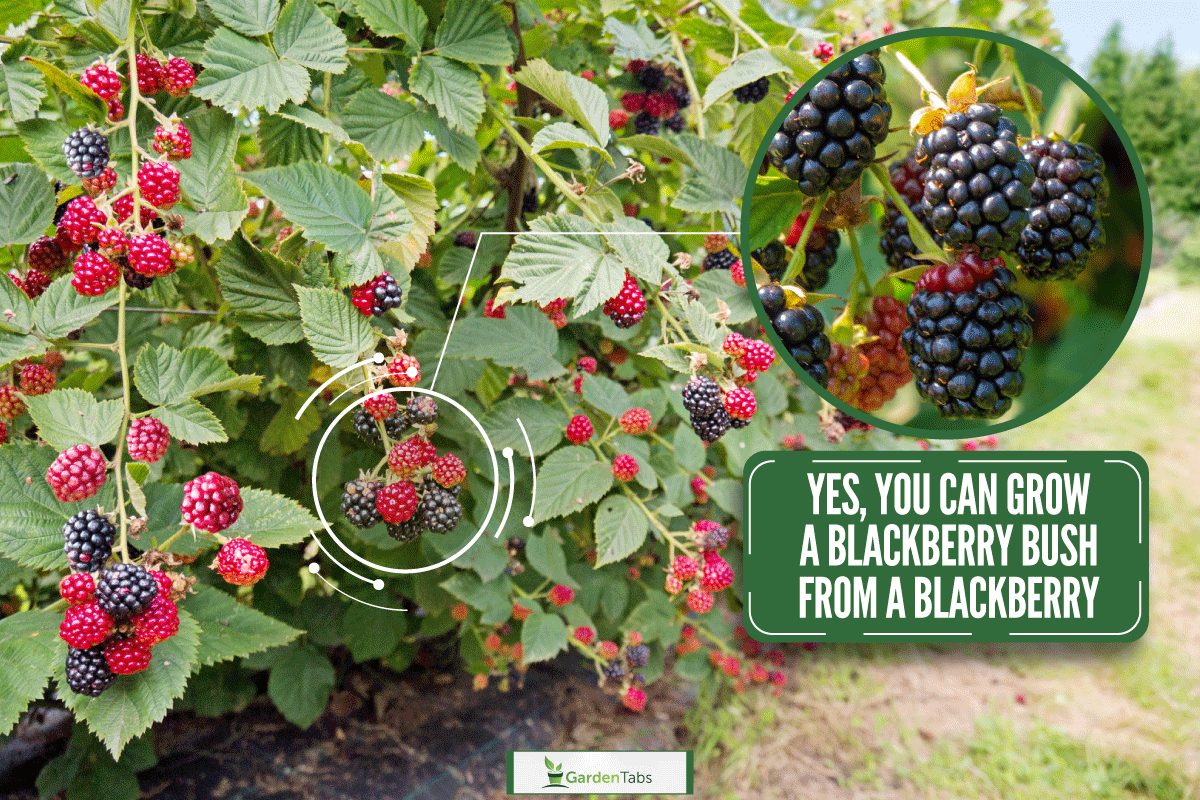 A simple procedure of putting blackberries in a blender can begin the process of growing your own blackberry bush. Blending the berries causes separation between the fruit and the seeds. Those seeds can then be replanted to produce a new blackberry bush. 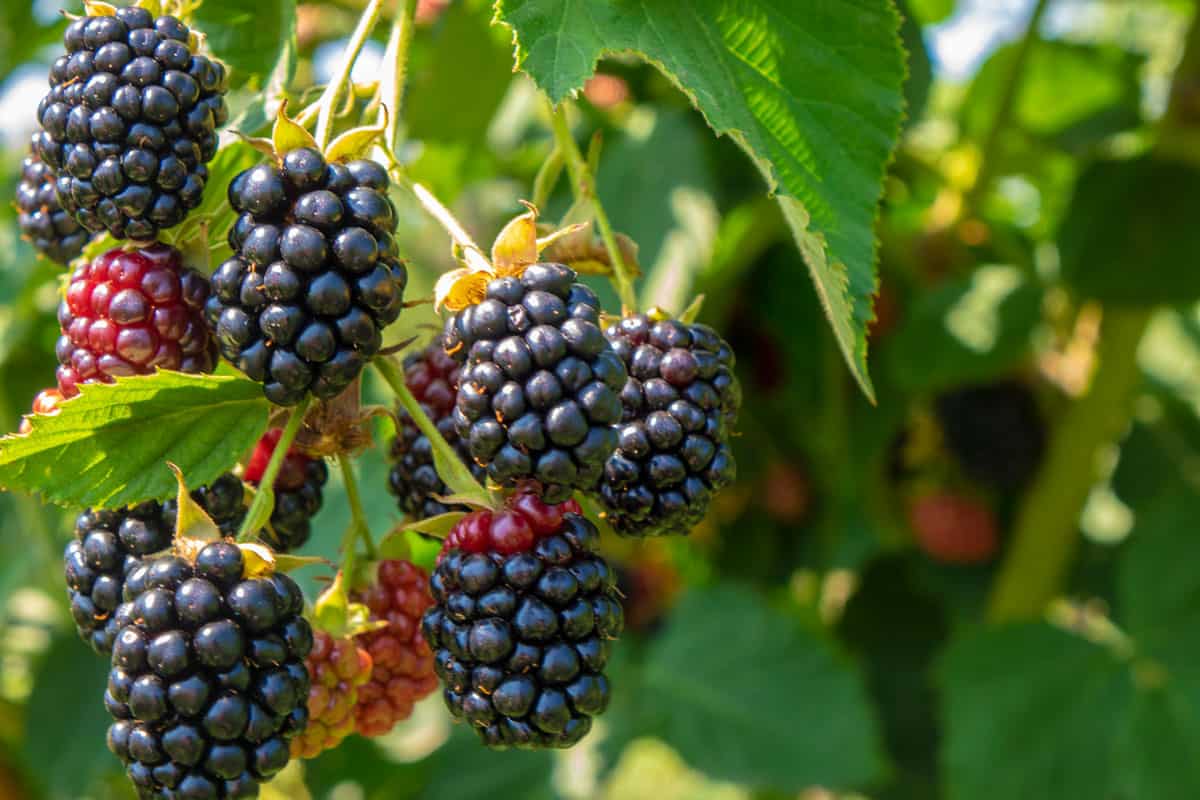 View these gardening gloves on Amazon.

View these gardening tweezers on Amazon.

What Is Seed Scarification?

Seed scarification is the process of cutting a small slice in a seed. The blender blades should have been enough to scarify the majority of the blackberry seeds. This will speed up germination by breaking through the hard outer shell and encouraging more water to seep through.

This can also be performed with sandpaper, a nail filer, extreme temperatures, and acid. We think using a small knife might work best!

In nature, this will happen during the winter season. The soil freezes over and the seed will break its outer shell in response. This can also happen if an animal eats the seed. While passing through the digestive tract, the seed will be naturally altered.

The process of stratification is also present in nature. Seeds will remain dormant until they have all of their environmental requirements.

Can You Use Dried Blackberries?

It is best to avoid harvesting the seeds from dried berries. Using fresh blackberries will ensure a higher successful germination rate.

Those seeds are already dehydrated, which makes their fertility rate significantly lower, as they are dormant. Seed dormancy is when the seed is inactive and incapable of germination. This could be due to numerous variables such as extreme weather conditions or immaturity of the seed embryo.

This section will explain how to grow an independent blackberry bush from an already existing bush. Note that the new bush will be a genetic replica, so don't expect a different berry variety.

The easiest way to propagate a blackberry bush is to replant the suckers. Typically, suckers are viewed as invasive, so everyone wants to get rid of them. In this case, however, the suckers are capable of producing fruit. Simply remove the sucker (go six inches in radius to each side) and replant it at least four feet away.

It is also an option to place the sucker shoot in a pot before transplanting it to the garden. It may be easier to tend to if it is secluded for a few months. 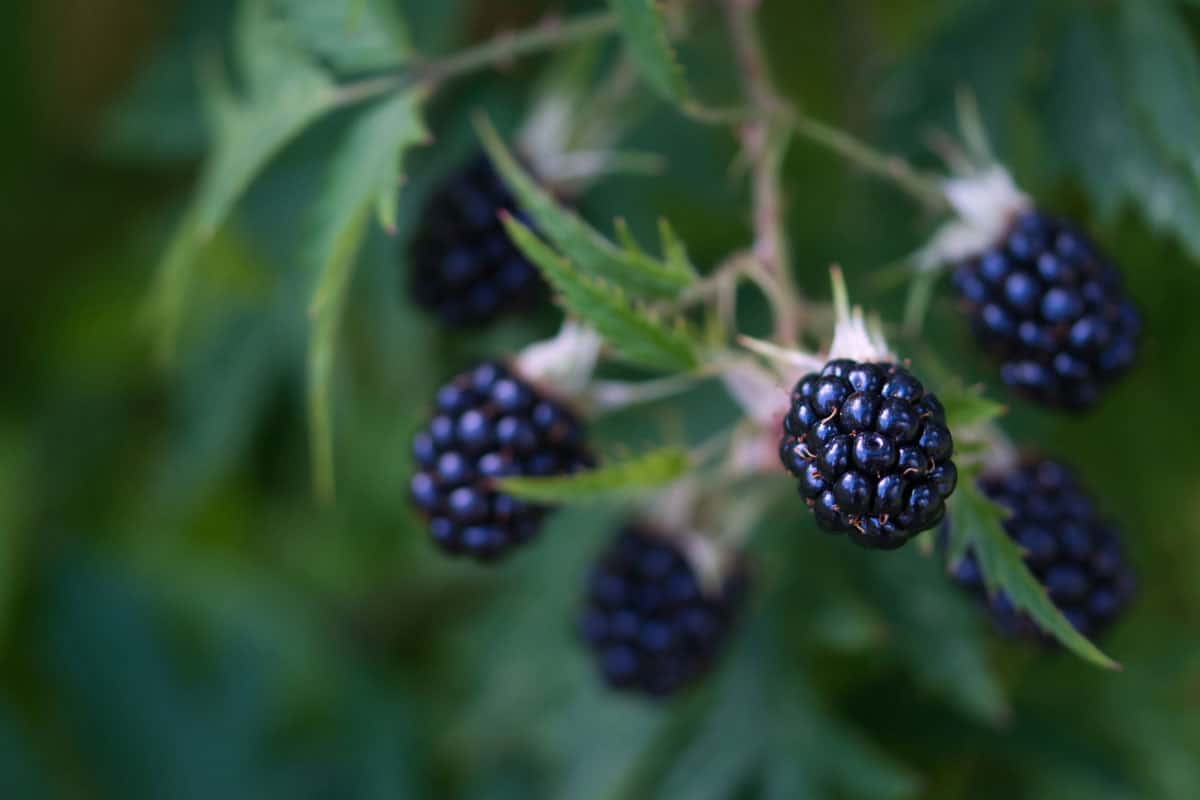 In the autumn, taking stems from the main bush is the second easiest way to propagate a blackberry bush. The stem should have plenty of leaves or flowers on it, but it should not exceed six inches tall.

It is suggested to plant it in the autumn because that is when the plant should be dormant. Planting it in the spring is also acceptable as long as there is decent rainfall. It is not required, but it is suggested to use a rooting hormone if the shrub settles unhappily.

View this rooting hormone on Amazon.

The blackberry plant can also be separated at the roots. This will need to take place during dormancy. Once the roots are separated, they need to be stored in a cool place. A refrigerator is an option but so is outside in a protected area. After a few months, they will be ready to plant two to three inches into the ground.

How Long Does A Blackberry Bush Live?

A blackberry bush can live up to 40 years old. The canes will grow for a year to two years before producing fruit. Often, the bush will give fruit for the first 20 years of its life before retiring.

There is a species of blackberry bush, however, called the everbearing blackberry, that will actually produce fruit as soon as the first autumn season.

Remember that the blackberry bush is deciduous, so it will lose its leaves each year. Don't panic; they'll be back shortly. In the meantime, just continue to tend to the shrub as needed.

What Is The Difference Between Blackberry And Elderberry?

Both of these fruits are often confused with one another, so let's settle this.

Blackberries and elderberries both have cancer-preventing properties, although blackberries are more nutritious. Both of these berries can be used for skin rejuvenation as well as a digestive aid. 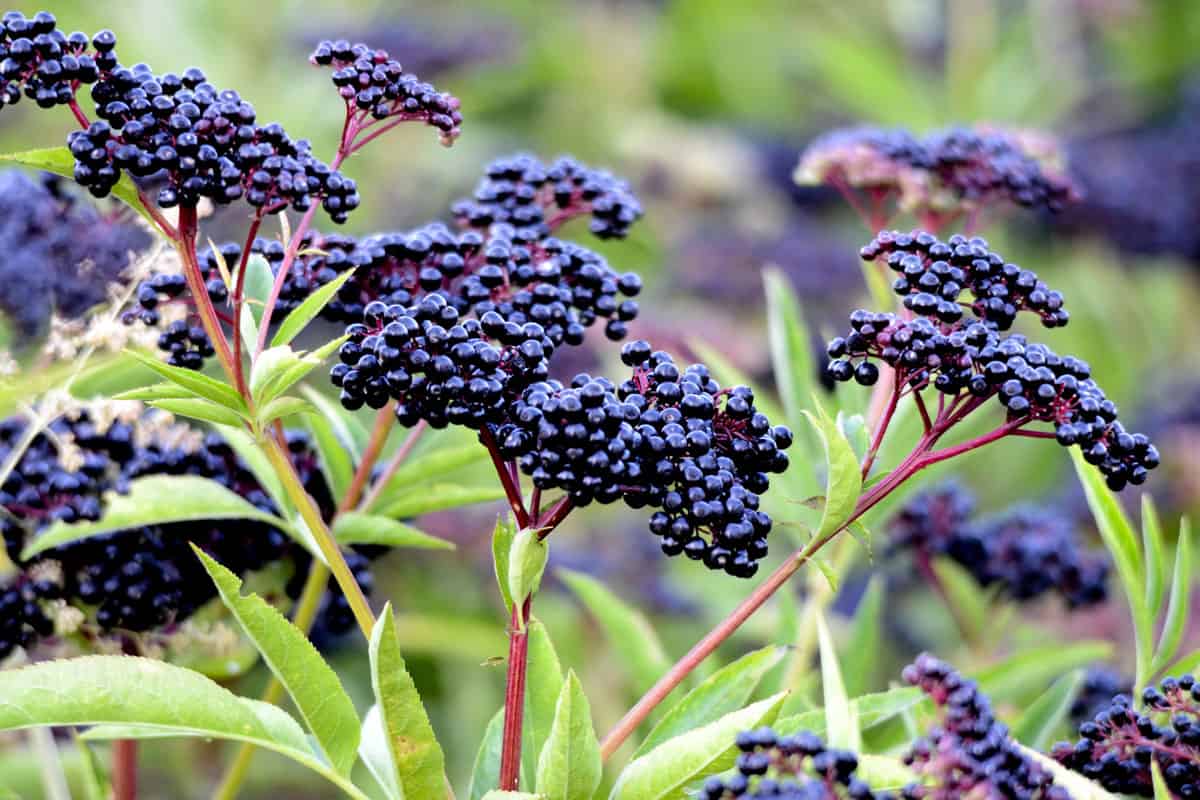 Something unique about elderberry that does not pertain to blackberry is its toxicity. Elderberry leaves and stems contain a compound that can turn into cyanide when metabolized. While the berries and flowers contain antioxidants that are healthy for your body, just an inch away is a poisonous plant.

Blackberries, on the other hand, contain more than seven times as much quercetin as elderberries. Quercetin is a bioflavonoid that has been used to treat inflammation, kill cancer cells, and regulate blood sugar levels. In addition, it has less saturated fatty acid and more magnesium compared to elderberries.

For more information on elderberry shrub care, check out this post: When To Transplant Elderberry [And How To]

The baby cakes species of blackberry sometimes produces fruit twice a year. It grows between three and four feet tall and just as wide.

This thornless blackberry variety is known to produce more fruit than many other species. This is a plant that likes its space though, so don't plant it in your garden if you have less than 10 feet to give it. 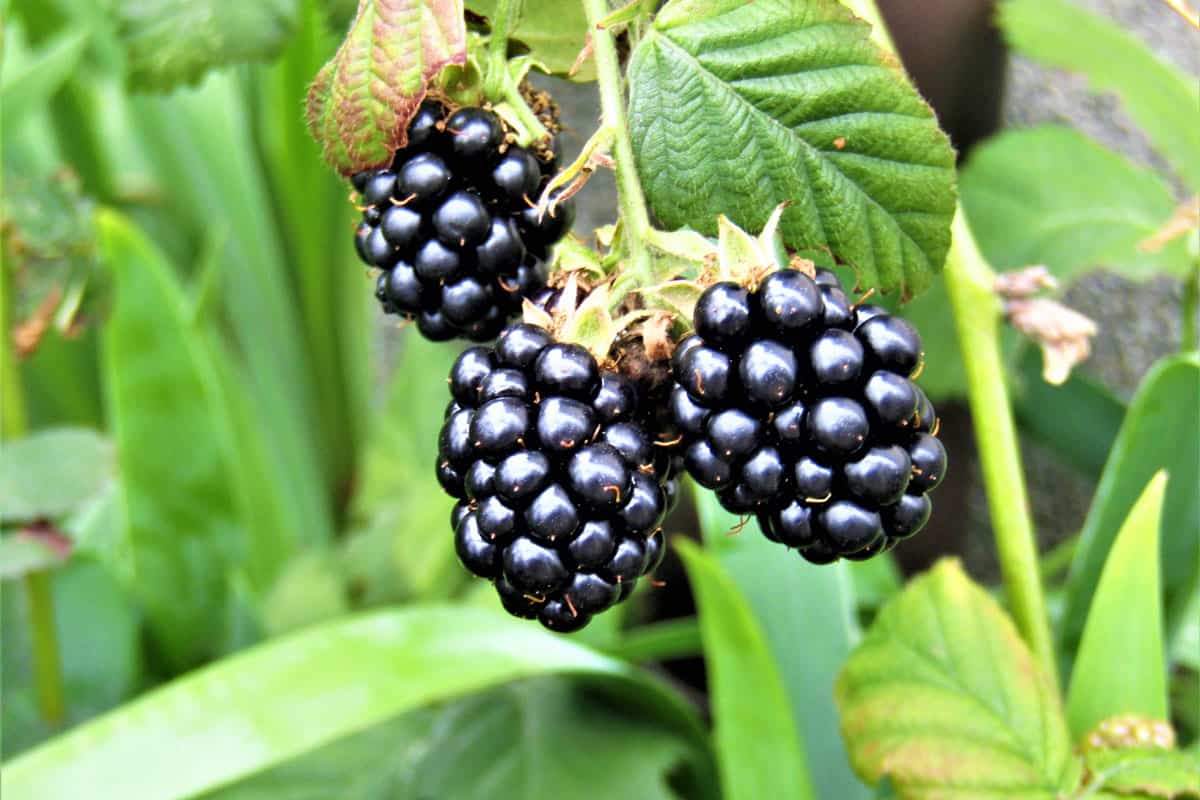 These berries come from white and pink flowers. Most blackberry plants produce only white flowers, so this is a treat to see. The first-year canes will even produce fruit in July if they are established early enough.

It mostly depends on what region the blackberries are being planted in. For example, the Himalayan blackberry is difficult to contain. The bush will continue spreading and make its way into new territory.

Unfortunately, this plant is responsible for fueling many wildfires. Be sure to do research and choose a blackberry species that will thrive in your zone. 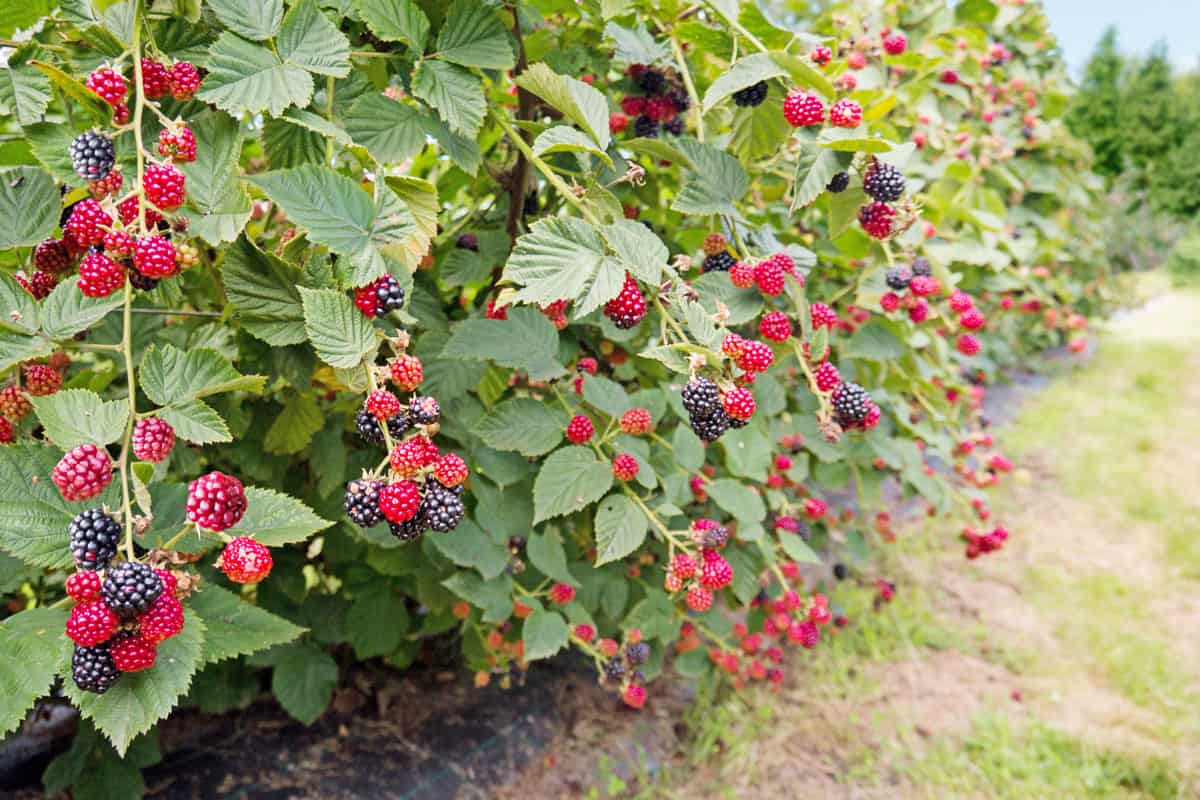 Blackberries can be used to create new blackberries! That is an exciting fact for all the berry-loving gardeners out there. Be sure to research what species of blackberry will do best for your garden. There are plenty of ways to grow blackberries, so experiment with the different methods if one doesn't work out.

Why Is My Elderberry Bush Dying? [And What To Do About It!]

Do Leaf Miners Live In Soil? [Where Do They Come From?]

Why Is My Mountain Ash Tree Dying?