Figuring out whether you can grow a particular tree in your landscape isn't always easy. For example, do you have your eyes set on a weeping cherry tree but don't know if it will grow in Florida? Can this majestic species thrive in subtropical Florida conditions?

Luckily, we've done our research and have the answer for you!

In general, a weeping cherry tree won't do well in Florida. Since this tree species has a growing zone preference of 4-9, many of Florida's regions won't fall into these appropriate zones.

For example, the Department of Agriculture has designated four zones in Florida: 8, 9, 10, and 11. So, you might be able to grow a weeping cherry in northern and central Florida, but it will be tricky.

As we start this article, we will cover all things growing weeping cherry trees and discuss whether you can have one in Florida. If you're new to the state, want to try a cherry tree, or have additional questions about these trees, we're here to help. With that said, let's dive right into this topic!

Can You Grow A Weeping Cherry Tree In Florida? 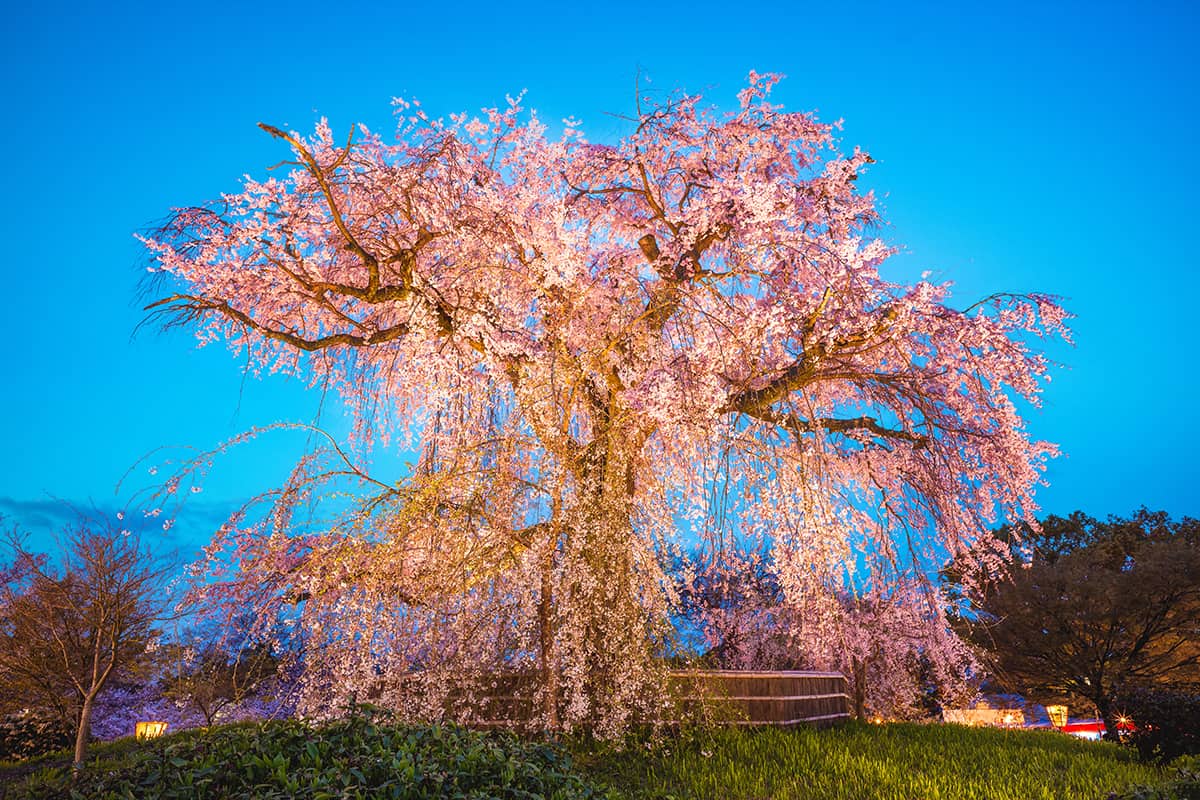 Most times, you won't have much luck growing a weeping cherry tree if you're in Florida. However, if your garden is more central or northern Florida: there's a chance this species will grow.

Typically, weeping cherries fall into the USDA zones 4-9, often doing better in cooler places. An interesting fact about these flowering trees is that they don't like super warm conditions.

Therefore, Florida isn't always the best place to try and raise one. Specifically, the state falls into zones 8, 9, 10, and even 11, which is way too warm for most cherry tree varieties.

That said, if you are in central or northern Florida, there's a chance your tree will be okay. Generally, weeping cherry trees can handle a bit of heat through the summer, as long as it isn't extreme.

Many experts also claim that you can usually grow weeping cherry throughout the United States: minus southern Florida, Texas, and California.

Where Is The Best Place In Florida To Grow A Weeping Cherry Tree?

Since weeping cherries typically prefer milder summers, that can make finding a spot for them in a Florida landscape tricky. However, many experts recommend planting weeping cherries in central Florida and cities/regions northward.

So, for example, if you live in Ocala or upwards, that could be a good climate for weeping cherry. Generally, the cooler weather a weeping cherry gets, the better it does.

Although many trees love a warm, sunny summer, weeping cherries are much more delicate. Most regions in southern Florida become too hot to sustain this flowering tree species.

Suppose you grow a weeping cherry in the Orlando area. Although the weather there is more moderate than in Miami or Sarasota, it can still be brutal during June and July.

Therefore, we recommend only planting weeping cherries in places that see frost in the winter and don't get hotter than 90 degrees in the summertime.

Can I Plant A Weeping Cherry Tree In Southern Florida?

Although other trees in your garden will like southern Florida's warm year-round climate, that is not the case for weeping cherry.

As we said, weeping cherry trees typically do better in moderate summer weather and colder wintertime conditions. When the summer's become too hot for too long, that can cause a cherry tree to become sickly.

If your cherry tree is in a super warm spot year-round, that can cause it to become stressed and lose its foliage. Furthermore, your cherry tree may not grow properly if it doesn't get a break from the heat, which you want to avoid.

So, if you're in Florida and want to grow a weeping cherry, we recommend sticking to northern or central cities, towns, and regions. Although gorgeous most of the year, South Florida can be too warm and tropical for many tree species.

Just as some trees can't handle freezing climates, others can't sustain themselves in triple digits.

What Cherry Trees Can You Grow In Southern Florida? 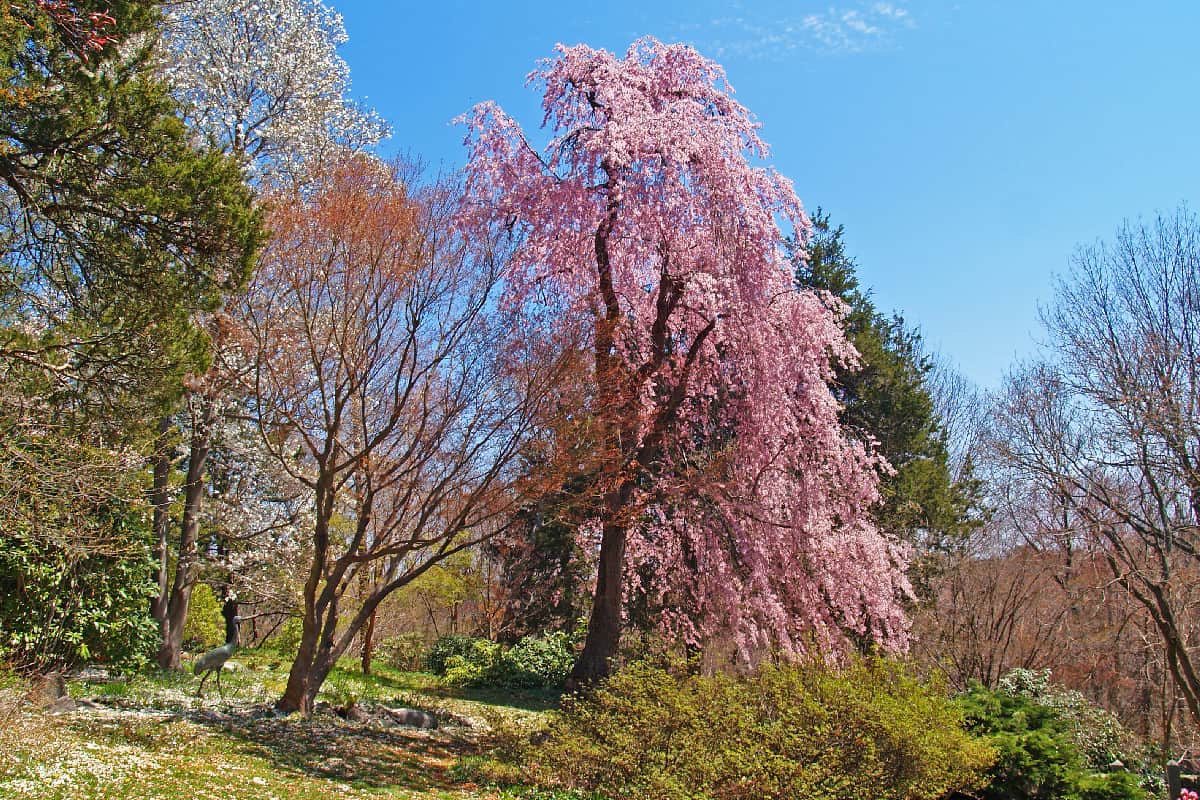 There are still options for those in southern Florida wanting to grow a cherry tree. Generally, you want to stick to the Surinam cherry or the Barbados cherry for south Florida.

Both of these tree varieties can handle the sun, heat, and lack of traditional winter weather that southern Florida is known for. Specifically, the Barbados cherry tree is tropical or subtropical and is suitable only for the warmer regions in Florida.

Barbados cherry trees are also somewhat floral, with small pink flowers appearing throughout April-October. So, if you can't grow a weeping cherry species, we recommend this one.

In addition, the Surinam cherry was introduced into south Florida before 1931 and has since become a staple for the area. According to the University of Florida,

Surinam cherry trees are a popular ornamental option for south Florida landscapes and can even be somewhat invasive.

These trees grow aggressively, often taking over landscapes if you let them, so they can be tricky. Regardless, these two weeping cherry tree alternatives are perfect for those in warmer south Florida.

Where Is The Best Place To Grow Weeping Cherry?

The best place to grow weeping cherry is somewhere with moderate summers and plenty of bright light. Even though these flowering cherry trees don't love extreme heat, they thrive in full sun.

That's because, through the winter months, your tree will need the sun for warmth and nutrients. Depending on where you live, your weeping cherry tree might go into dormancy during winter.

Even then, it should be somewhere with plenty of light, which will come in handy once spring arrives. According to many gardeners, weeping cherries prefer upwards of 6-8 hours of daily sun, although they can also survive in shadier spots.

Generally, weeping cherry trees in warmer USDA zones, like seven or eight, can do better in partial shade, so they don't become stressed or dehydrated.

So, in Florida, you might see better results from your weeping cherry if it's partially shaded during the hotter afternoon hours. Dappled shade is a great choice for this species, as it will give your tree bright light between the morning and afternoon.

Can I Plant A Weeping Cherry Tree In Full Shade In Florida? 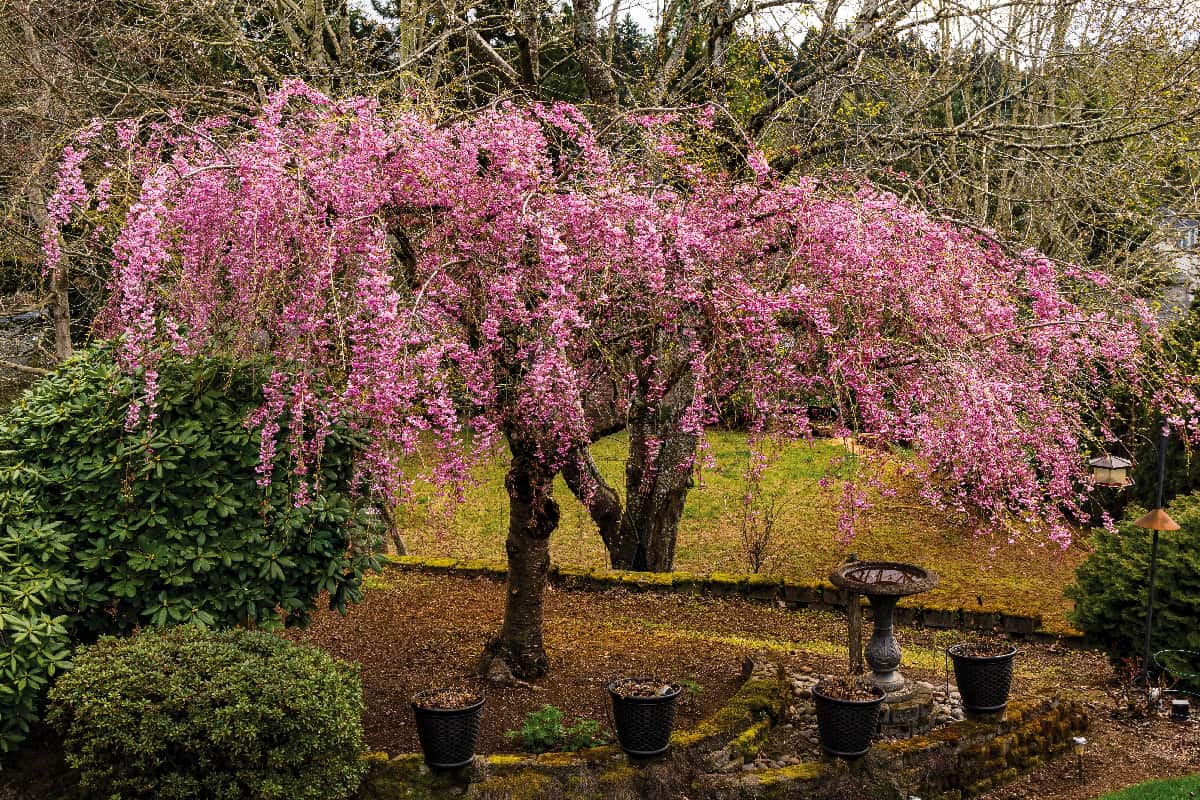 If you have a shadier Florida garden, you still need to give a weeping cherry some daily sunlight. As we said, this species can benefit from dappled shade in warmer hours, but it still requires the sun to live.

Generally, it would help if you planted a weeping cherry tree somewhere that gets at least 4-6 hours of bright direct sun exposure each day. So, growing one in full shade opens the door for root rot, waterlogging, and other moisture-related problems.

You have to remember that not all sun is extremely hot for your cherry tree. Depending on where you are in Florida, the sun may not feel as overbearing for your tree and garden.

For example, people in central or northern Florida won't feel as hot in the summer as someone right at the southern tip. Therefore, full sun or even dappled shade is much better than full shade.

The sun gives your tree energy to grow and stay healthy, so it's essential for your plant.

You can usually expect a weeping cherry tree to grow between one and two feet annually. Especially if you're in a warm place like Florida, this can help your tree grow longer.

Again, you can't plant weeping cherries in hot climates, but your tree should grow throughout the year in moderate Florida regions. It's also interesting that many weeping cherries reach nearly 20 feet within their first decade, which is pretty fast. 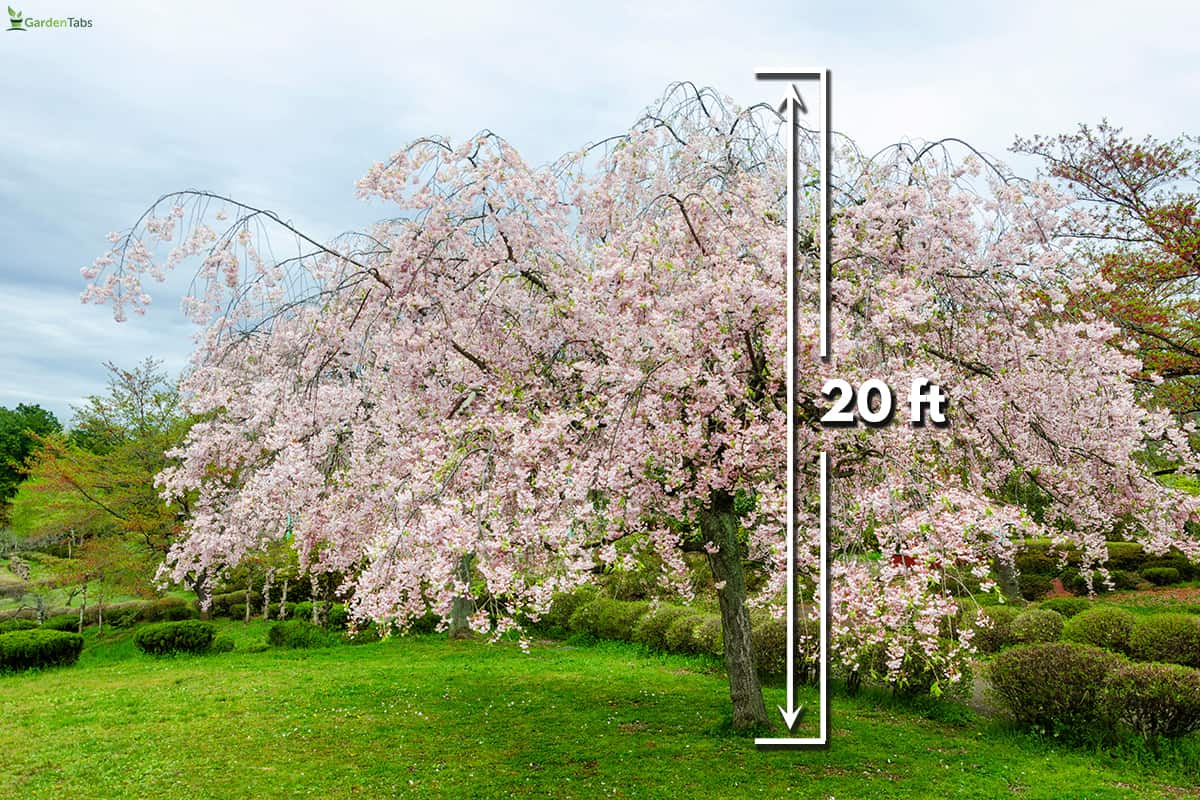 On top of that, you can expect faster growth and blooms if your weeping cherry tree is in the full sun and doesn't get too much moisture in its soil.

Even though many areas in Florida won't be able to sustain these stunning trees, if you're somewhere, you can: expect significant growth and gorgeous flowers each year.

When Do Weeping Cherries Bloom In Florida? 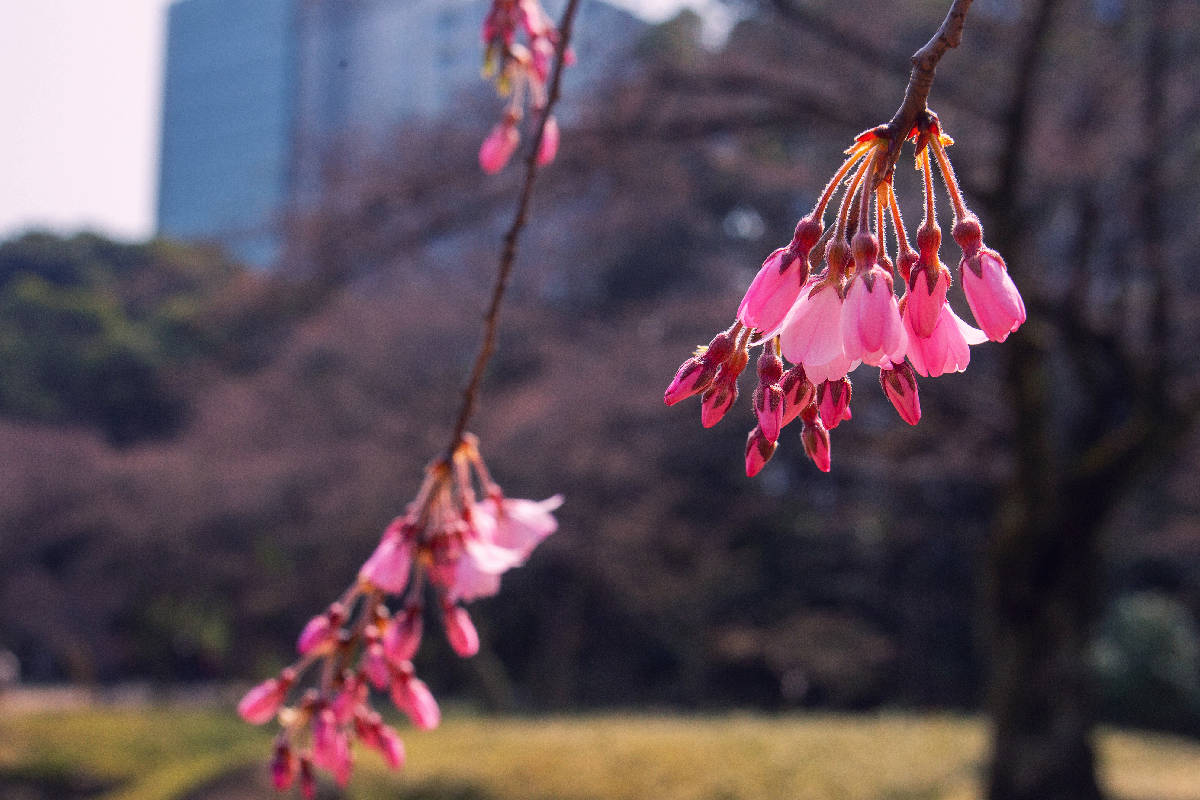 You can usually expect a weeping cherry tree to bud in the winter in Florida, blooming in the early spring. According to Gardenia.net, you can expect most cherry species to bloom throughout the spring season.

Especially in Florida, you may notice longer blooms if the weather is nice. That is one benefit to growing weeping cherries in central or northern Florida, as the winters still aren't super frigid.

It's also worth noting that some weeping cherries will bloom in late winter if the weather isn't too cold. So, in Florida, you could see flowers start to show in late January or even into February.

Compared to someone in the midwest with a weeping cherry tree that's a couple of months in advance for blooming, which is very exciting for eager tree growers.

Once the gorgeous flowers start to show up, you can expect them to last 2-3 weeks: so enjoy them while you can!

Location matters if you have a weeping cherry in your Florida garden or want to plant one. We found that you can't always plant a weeping cherry tree in Florida landscapes, especially if they reach triple digits regularly through the summer.

However, many experts claim you can try planting weeping cherries in central and northern Florida, essentially from Ocala upwards. The key is finding a garden with chilly winters and moderate summers.

In addition, you also want to give your weeping cherry six or more hours of daily sun, which will help it grow and promote better blooms.

Do Weeping Cherry Trees Produce Fruit? [Can You Eat It?]

What To Plant Around A Weeping Cherry Tree?

When To Plant Cherry Trees By Zone? [And Tips For Best Growth]