Autumn is one of the prettiest seasons of the year, where fruits and crops are abundant, and leaves turn into a beautiful range of reds and oranges. We've checked out a number of flowering trees and shrubs that flower beautifully during this season, and in this post, we're sharing with you 11 of the prettiest flowering trees and shrubs for the autumn season. 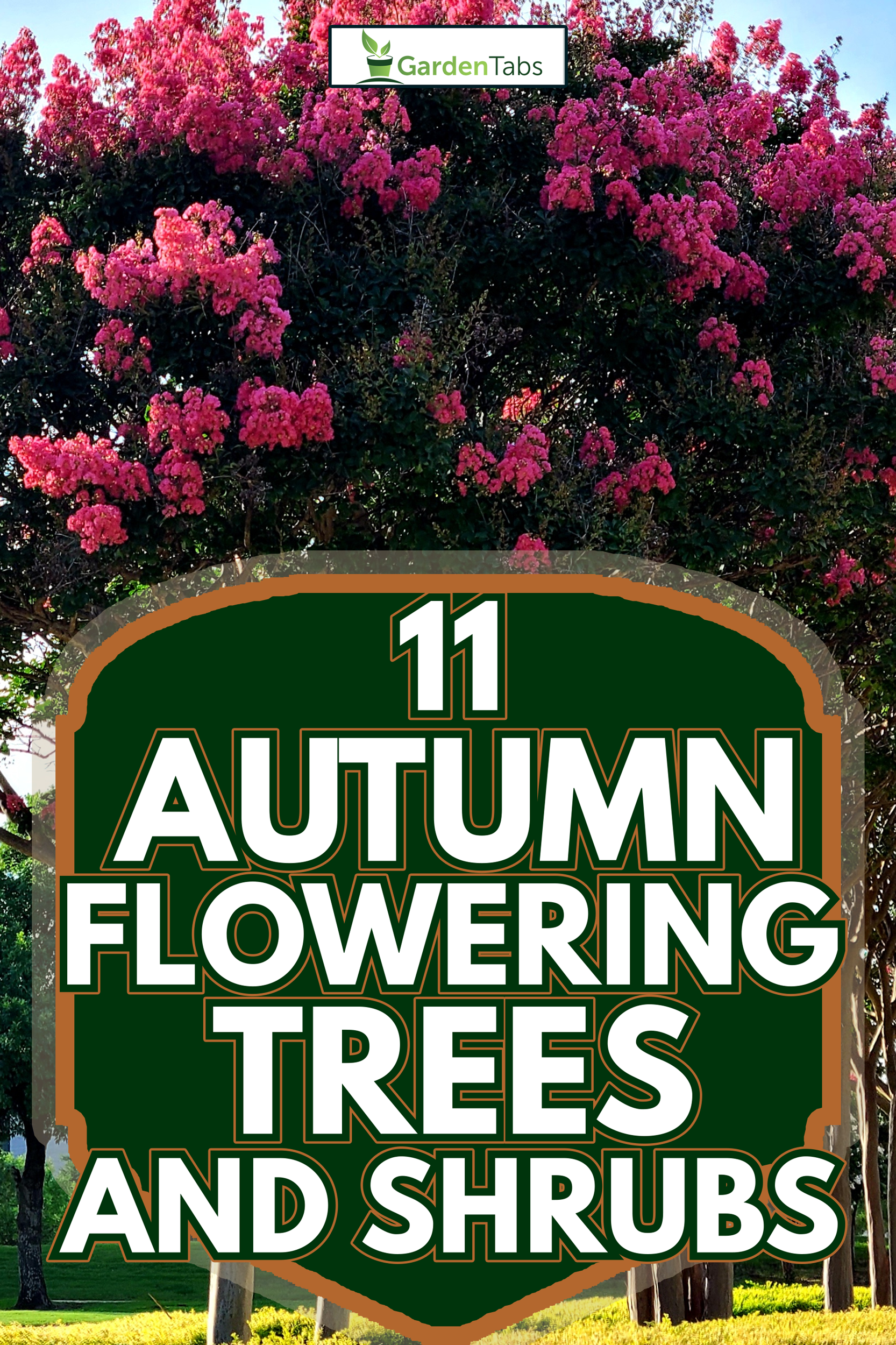 There are quite a number of autumn-flowering trees and shrubs, with many varieties and cultivars that grow differently in different conditions. Depending on the area where you live, some shrubs and trees will grow well and bloom well into the midsummer until late fall. 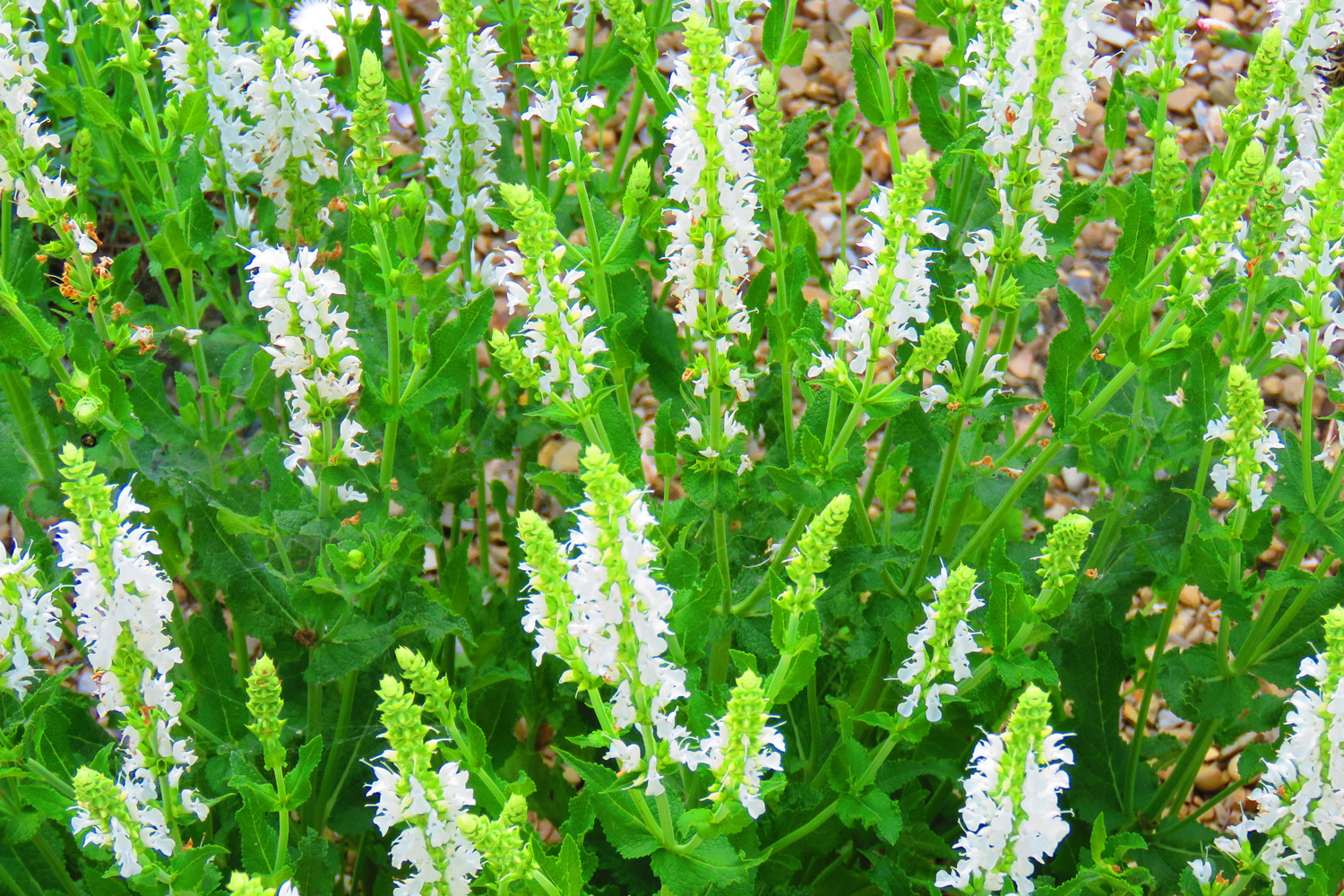 Summersweet or sometimes called the pepper bush plant, are ornamental shrubs that bloom during late summer and continue blooming until early fall. Its foliage turns into rich hues of yellow or orange from its dark green color during autumn, which adds color to the season.

These shrubs are also great pollinators, so they attract bees and hummingbirds to your garden during its bloom season. The flowers are usually pink in color, which adds a beautiful shade to your landscape. If you are planning to add these to your garden, make sure to give space as this shrub can grow up to 5 to 7 feet tall and spread out 6 to 8 feet across the landscape. 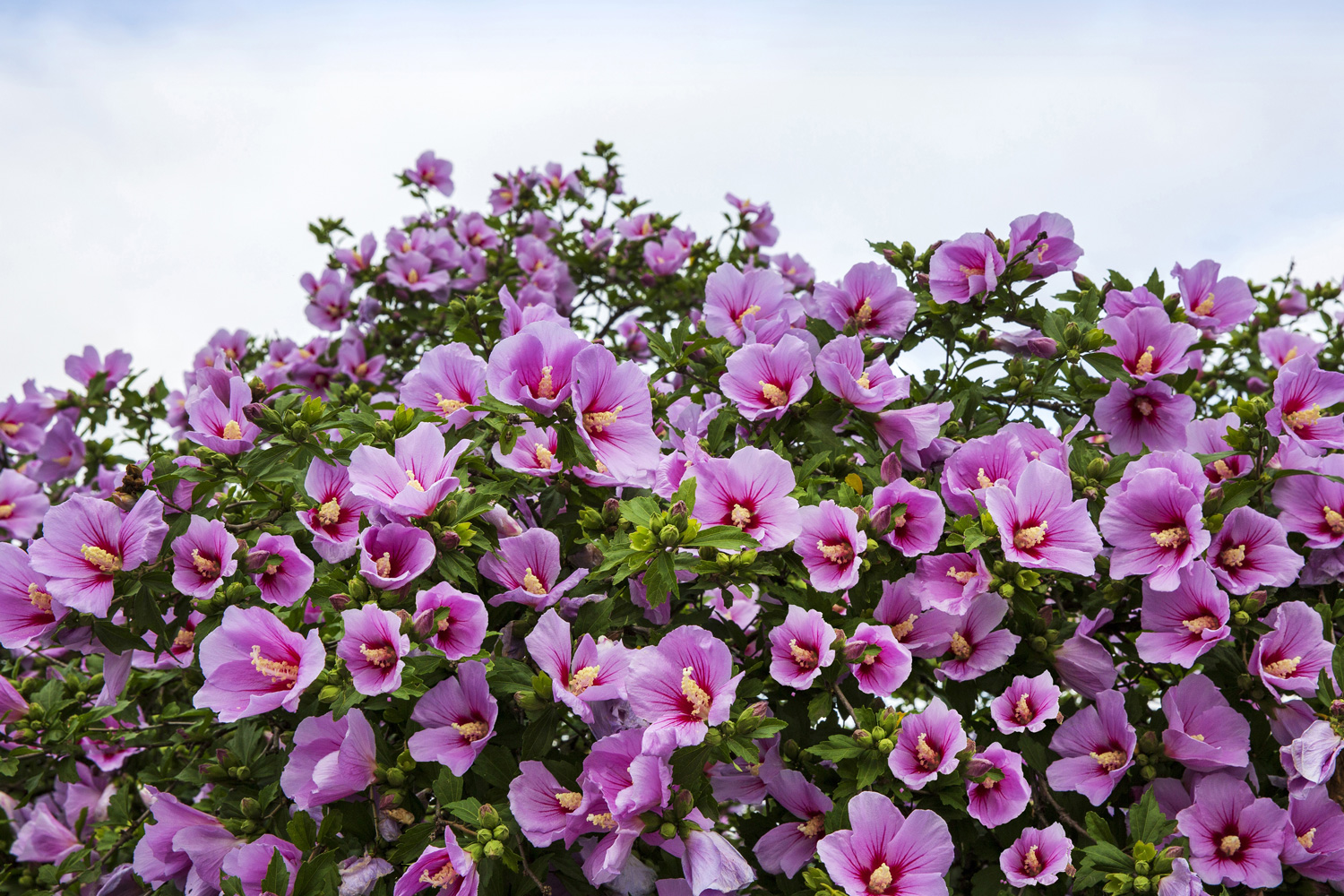 A hardy flowering shrub, the rose of Sharon grows well during midsummer to early autumn, and it adds a tropical look to any landscape. Known to be a hibiscus variant, rose of Sharon shrubs do well in a wide range of conditions, even colder climates.

The flowers bloom during the summer, but it lasts through early fall. You will typically find it in colors ranging from red, pink, white, lavender, and a variety of bi-colors. Depending on the cultivar that you have planted, the flowers come in single or double forms, both of which look beautiful in any garden. 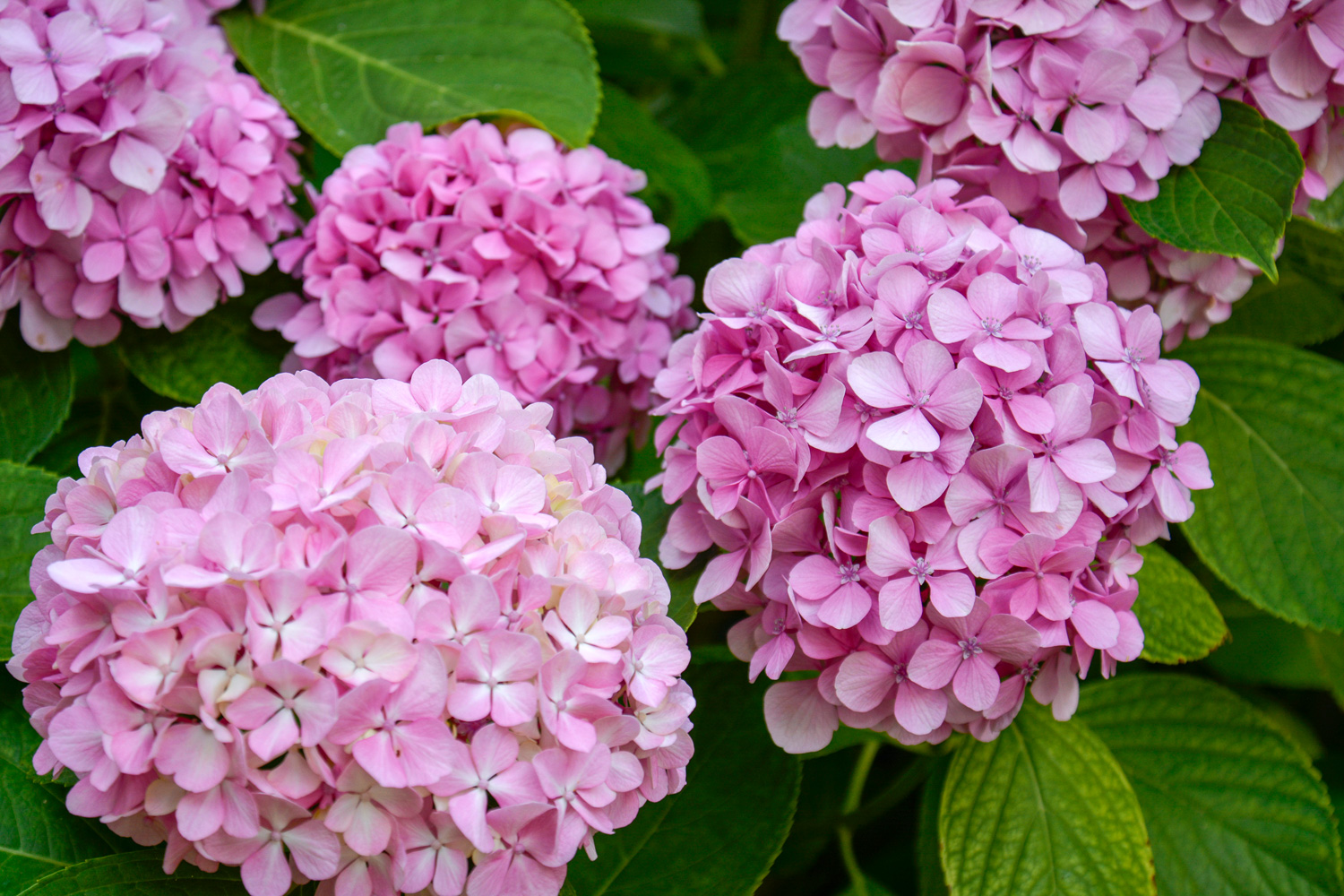 This plant has multiple variants, but hydrangeas do come with fall-blooming varieties that add color during the cooler season. The most popular one that grows during the season is called 'Hydrangea paniculata' or you can look for the limelight and candy apple varieties.

Blooming throughout the midsummer to early autumn, hydrangeas of this variety come in a multitude of colors. Ranging anywhere from greenish-white to deep, vintage pink, these hydrangeas are pretty large when they flower and look stunning in the garden. 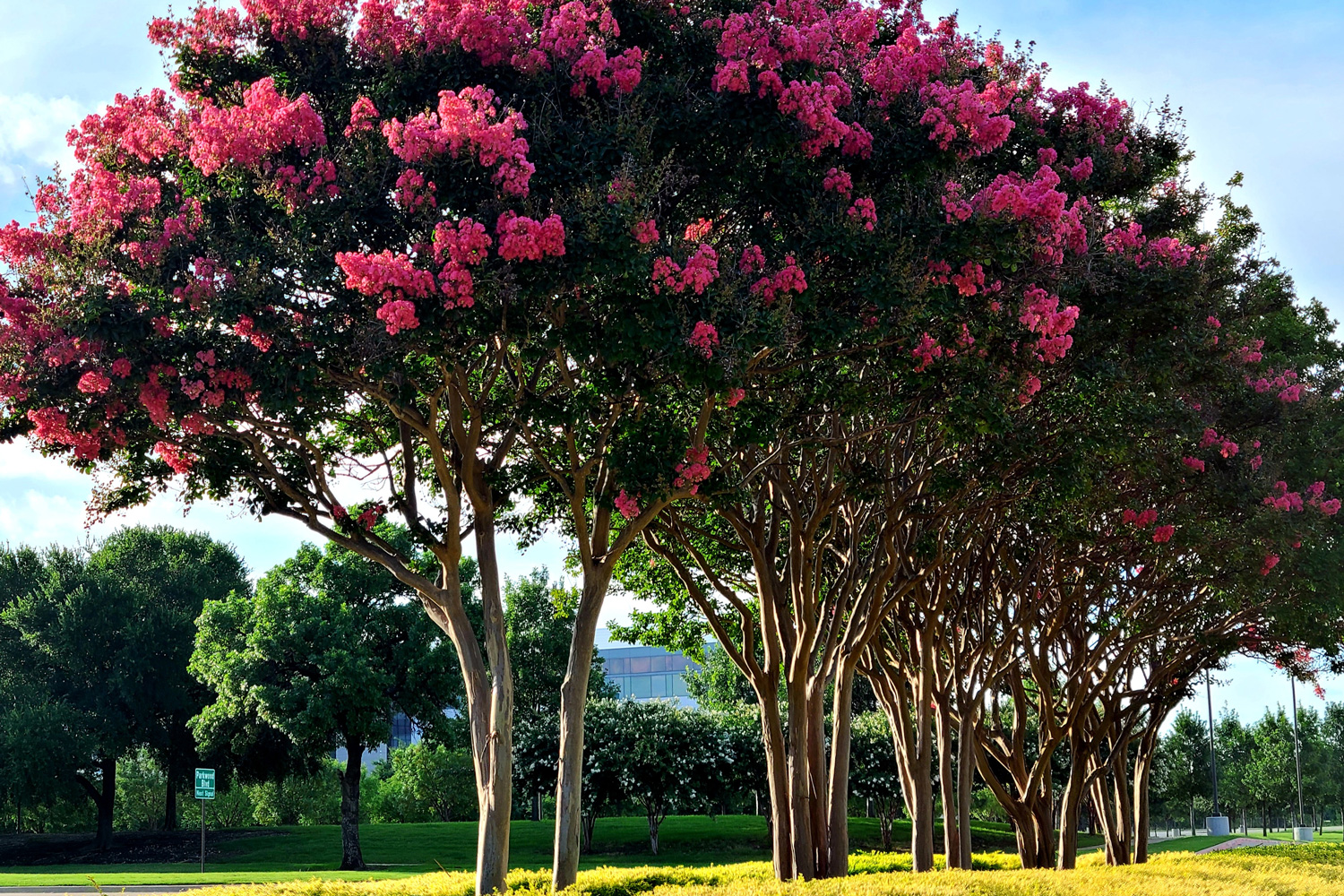 Crepe Myrtles are heat-loving trees that are drought-tolerant and bloom in festive colors during the fall. These trees are roughly small to medium in size, and they flower throughout the entirety of spring and fall. The trees also have multiple trunks that look really decorative even without the blooms, which makes them a beautiful addition to many gardens and landscapes.

During their flowering season, crepe Myrtles bloom in abundance with flowers that range in different colors. Depending on the cultivar, you should be able to see variants with flowers in shades of white, purple, red, or pink. During the fall, the foliage also turns into rich autumn hues, with the leaves turning into beautiful yellow, orange or red tones. 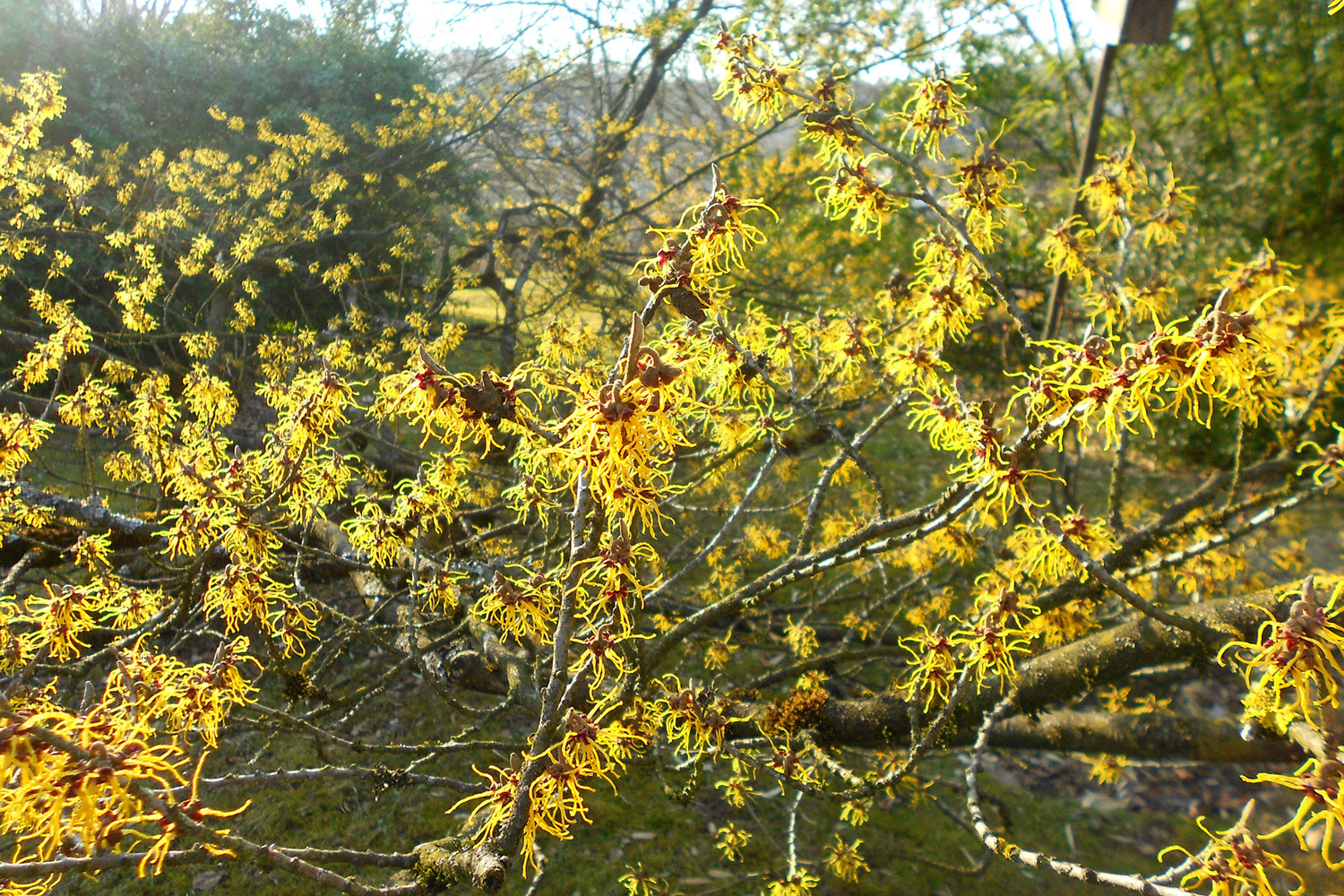 Witch Hazels are deciduous shrubs that are native to eastern Asia and eastern North America. Generally sized from medium to large shrubs, witch hazels grow upright and widely in the landscape. These plants do well during late fall, with most of their blooms appearing during November until the end of winter, depending on the species and cultivar of the shrub.

Their blooms appear on bare branches of the shrub, and the flowers themselves consist of many star-shaped petals. Some cultivars do develop fragrances, but others do not, but they do flower just as beautifully. The colors of the blooms range from yellow, to copper, to deep reds, which makes them a pretty sight to see with all their fall colors. 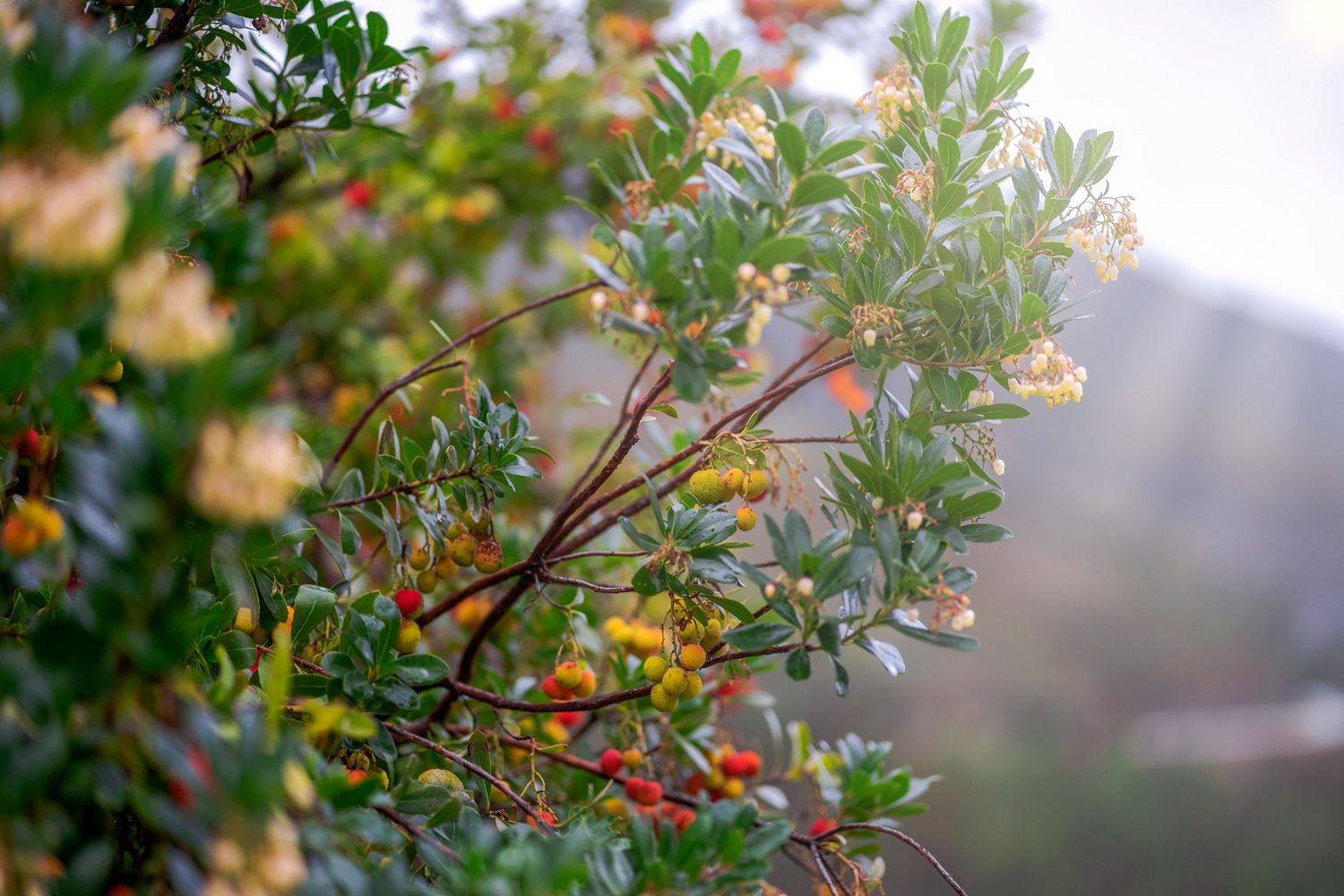 Native to the Meditteranean basin and around parts of Ireland, the strawberry tree is an autumn tree that grows quite small and wide. This tree grows upright to about 15 feet tall, spanning about 20 feet wide, with some cultivars measuring a lot smaller than standard cultivars.

The strawberry tree bl0oms ripen at the same time as they occur. Typically, you will see the tree with leathery, dark green leaves and flowers in varying colors of white and pink. They are usually urn-shaped and form clusters, to which they eventually develop into an edible reddish fruit that is used in preserves and some distilled spirits. 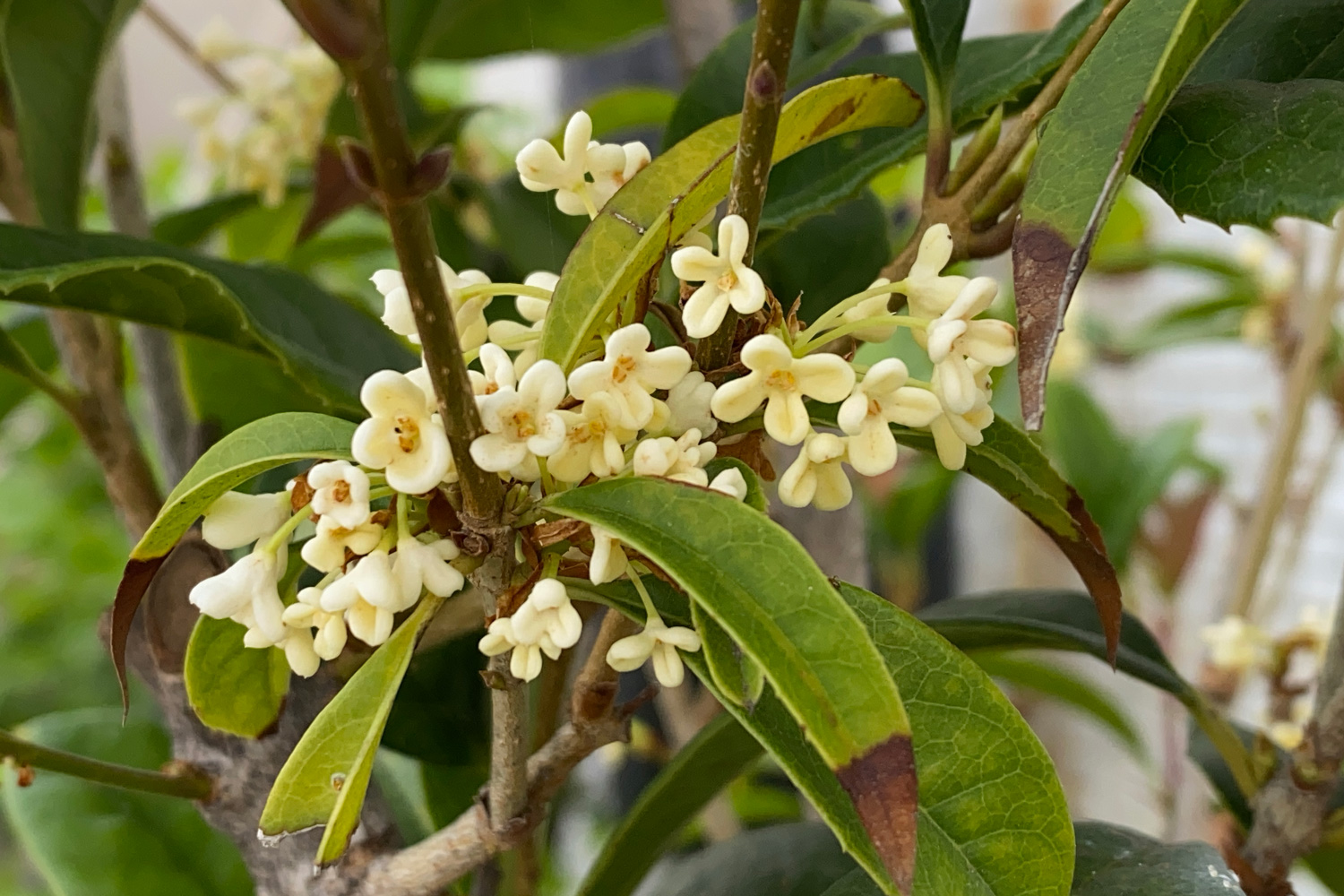 The fragrant tree olive is an evergreen shrub with broad leaves and is known to be native to Asia. This shrub grows anywhere from 10 to 20 feet tall, and they produce very fragrant flowers, hence its name. They bloom from midsummer and sporadically throughout early autumn, and these shrubs are perfect for signaling the start of the new season.

The flowers are white and very fragrant, with their fragrance resembling those of apricots. The leaves are quite leathery and dark green that grows quite thick. Plant these shrubs in open or lawn areas, and they are great to use as hedge plants as well. 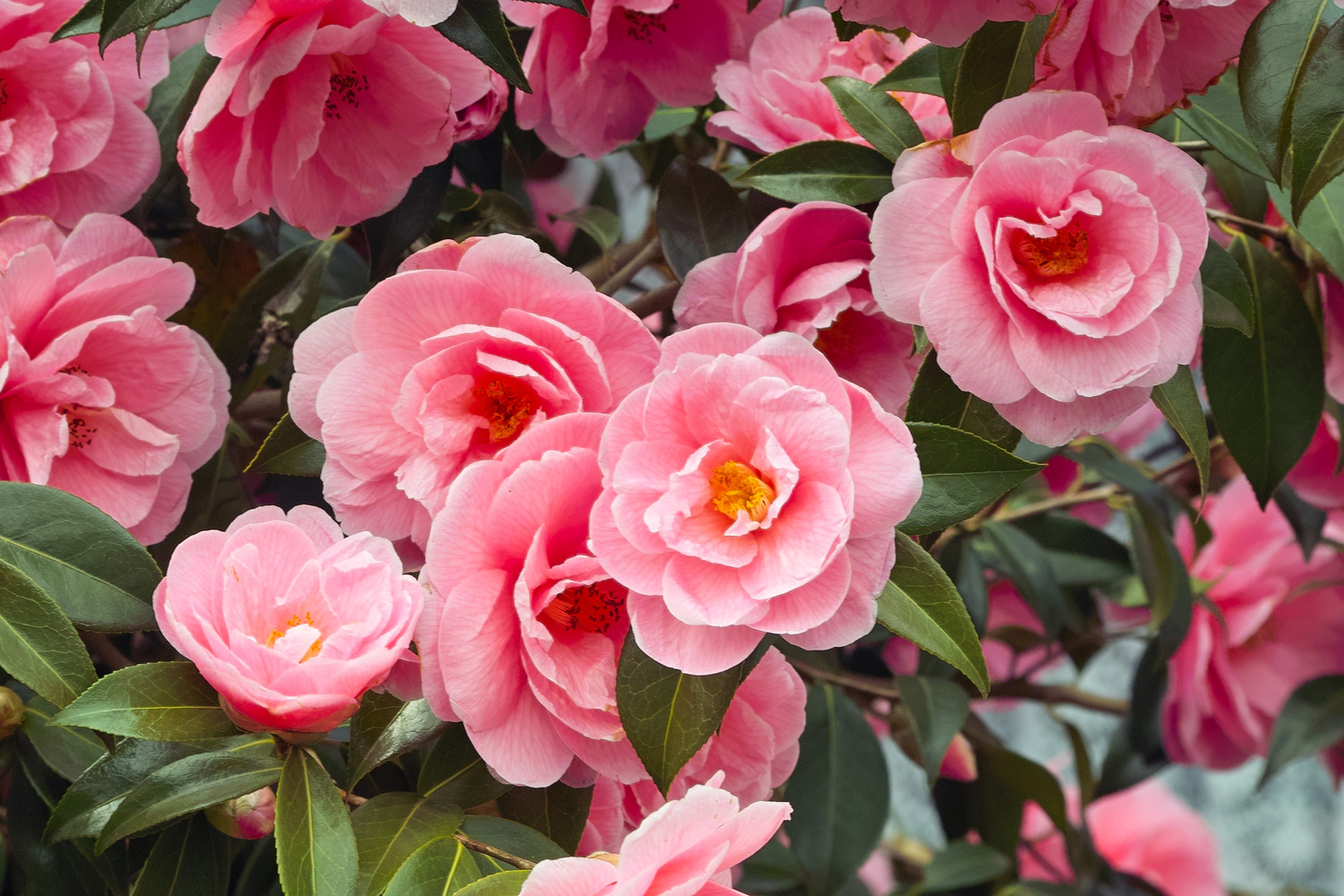 Similar to hydrangeas, Camellias also come in many varieties, including fall-blooming ones. The variety 'Camellia sasanqua' blooms during late fall to early winter, which makes it a pleasant addition to the slowly cooling weather. These fall-blooming camellias as hardier and more drought-resistant, which is great for first-time planters of this variety.

Camellias of the fall variety come in a multitude of colors, all ranging from white to fuchsia pink, depending on the cultivar. The petals are also different for every variety, and they are great if you are looking to add a good number of fall blooms to your garden. 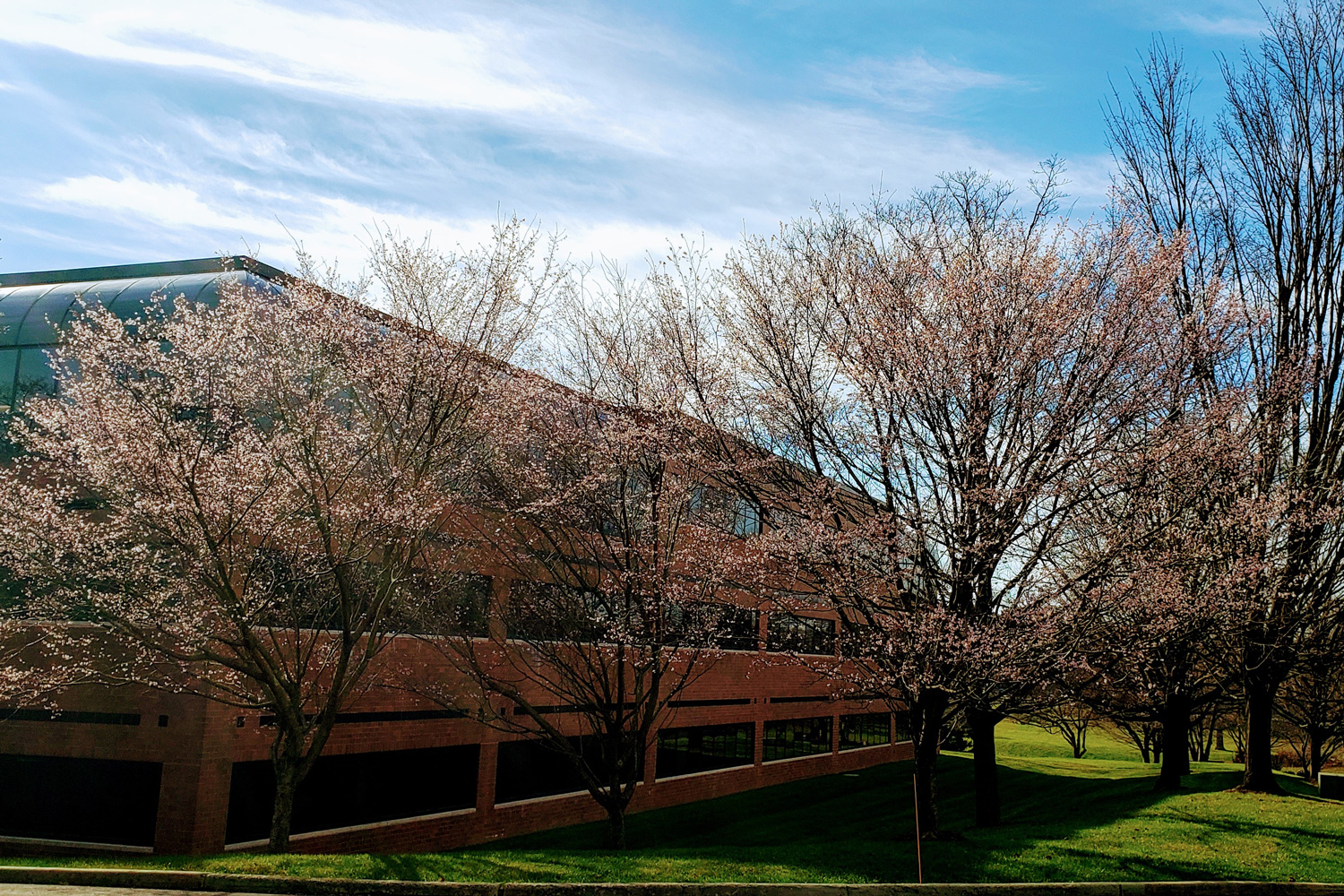 Also known as the Higan cherry, the autumn Higan tree is native to Japan, and it is known for its beautiful blush pink color. Most cultivated forms of this specie are spring-flowering small trees, but the 'Autumnalis' and 'Autumnalis Rosea' cultivars do flower sporadically in the spring before breaking into more blooms in the early spring.

The trees are quite small, with trunks that are narrow which makes them quite fragile compared to other trees. When the weather becomes warm during the fall, expect the Higan cherry to sprout a few blooms. Depending on the cultivar of the tree, the autumn Higan blooms with semidouble to light pink, to an even deeper pink shade. 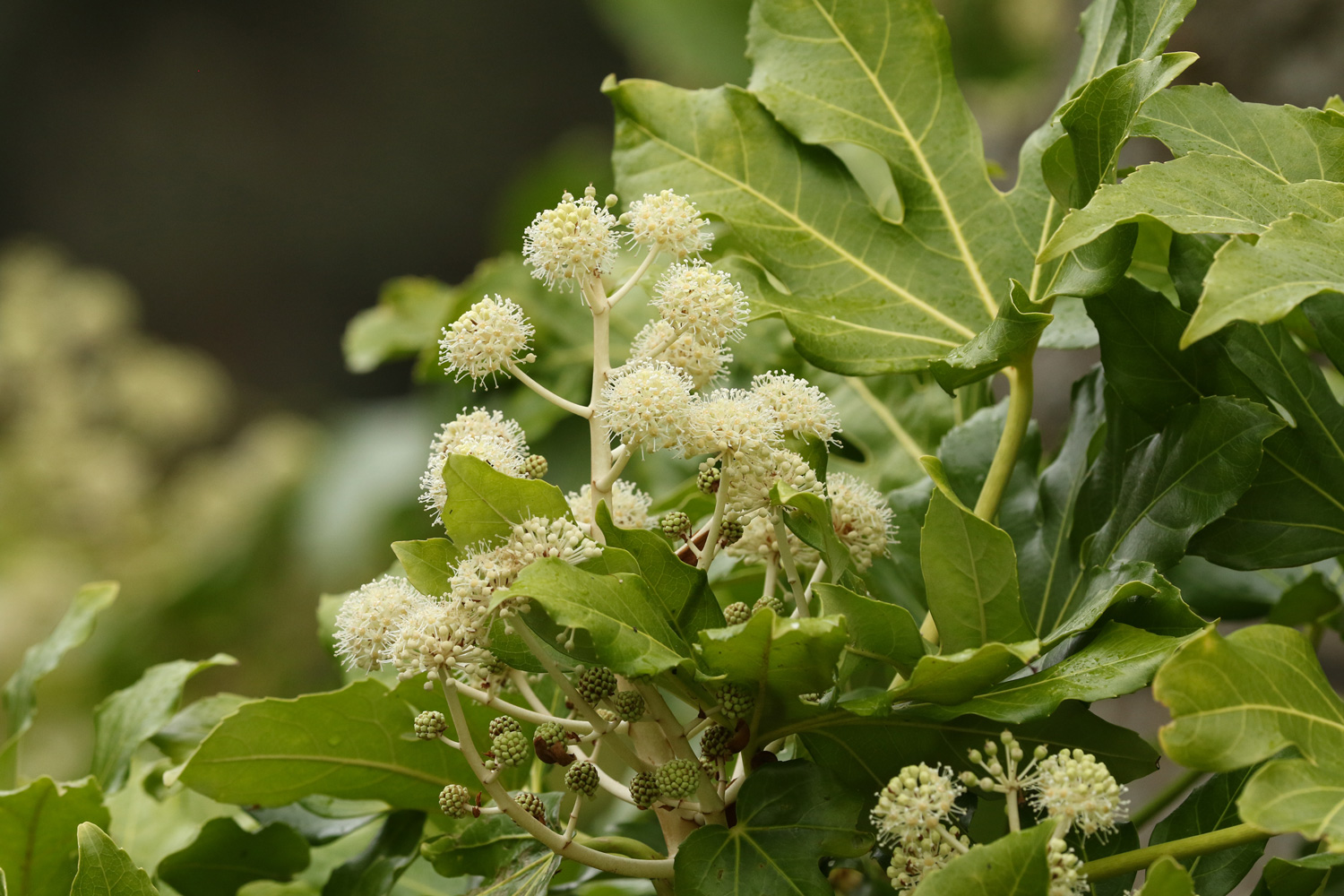 This tree is native to Japan and South Korea, where it grows to be a modest-sized upright shrub. In the woodlands, the Japanese Fatsia grows with large dark green leaves that give it the appearance of being a tropical plant within the landscape. They grow quite well and flower during the November to December months, which makes them great for late fall.

The Japanese Fatsia's blooms are round and spherical clusters and roughly the size of a golf ball. They are white, and the flowers are very attractive to pollinators, so expect to see bees to be around this shrub. Unfortunately, the flowers are very sensitive to cold, and freezing temperatures will bring the flowering to an end. 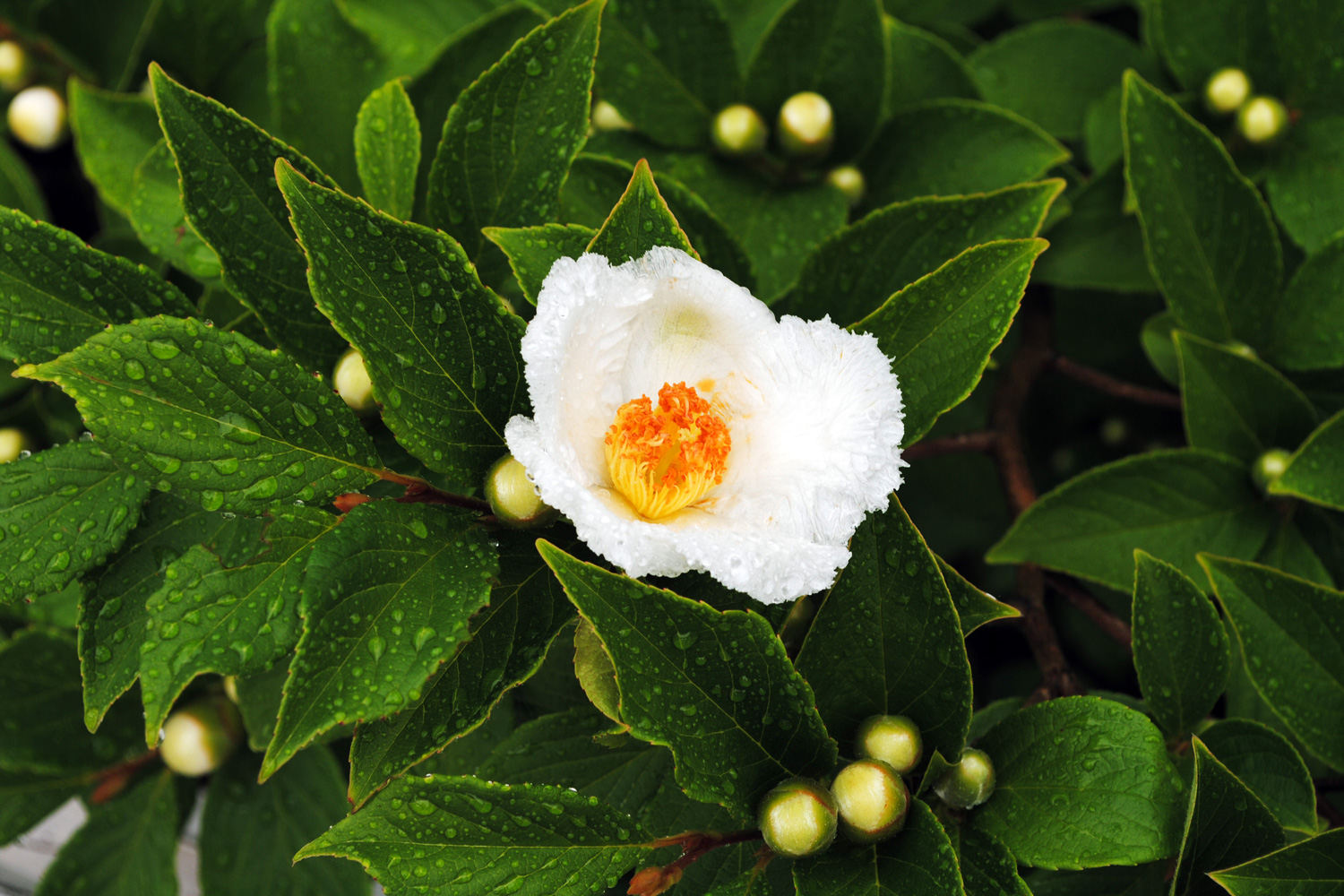 The Benjamin Franklin tree was named by naturalist William Bartram as an honor to Benjamin Franklin, the founding father of the United States and a good friend of his father, John Bartram. Originally seen in the southeastern part of Georgia, John Bartram discovered the shrubs in 1765 and his son collected some seeds a few years after which all Franklin trees are descended after.

The Franklin tree is known to grow upright anywhere from 15 to 20 feet, spreading to about 10 to 15 feet wide. It blooms beautifully from late July to August, and sporadically into early autumn, with fewer flowers during September. The flowers are typically perfect in shape, 5-petaled, white, and quite fragrant. The leaves turn into hues of reds and purples during the fall.

Autumn brings about one of the best times to see flowers and trees in their best form. With the temperatures dropping low enough to comfortable coolness, expect flowers to bloom just as nicely as it does during spring. Although some of these trees and shrubs flower sporadically during autumn, do enjoy the flowers before the freezing winter comes.

Are you thinking about planting other trees and shrubs for your garden? Look no further because we've got some articles that might interest you: