If you just started growing marigolds in your garden, you're probably wondering whether it's an annual or perennial plant so you can prepare for possible replanting. We've researched this topic, and here's what we learned.

There are more than 50 varieties of marigolds, and the majority of them are annuals. This means they live only through one growing season or less than a year. Common annual varieties include African, English, and French marigolds.

A few varieties are perennial, which regrow every spring and live for several years. Perennial varieties include Mexican tarragon, Lemmon's, and Mountain marigolds.

Marigolds are beautiful, vibrant flowers that are easy to grow, with dozens of different varieties. We've covered some of the most common types below and identified whether it's perennial or annual. Read on to help you identify the marigolds you're growing!

Are Marigolds Perennial Or Annual Flowers?

The majority of marigold varieties are annual flowering species.

This means they will grow only for one season or less than a year. They will bloom throughout spring and fall and then die out in colder seasons because they are sensitive to frost.

The most common annual marigolds found in many gardens are: 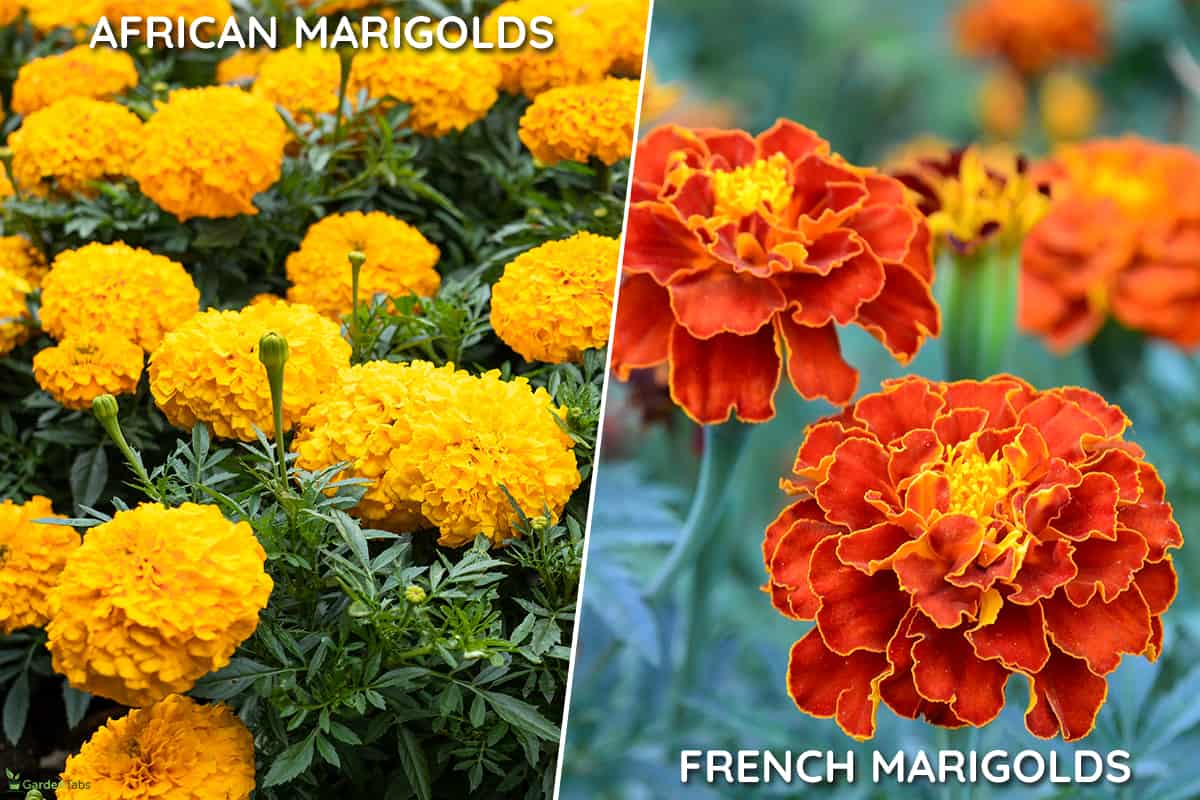 There are around 50 species of annual marigolds, but only a few of these species are perennials. They are not easily found growing everywhere. When you see one, it will look like a flowery shrub.

Three of the most common types of marigolds growing in the U.S. that are perennials include: 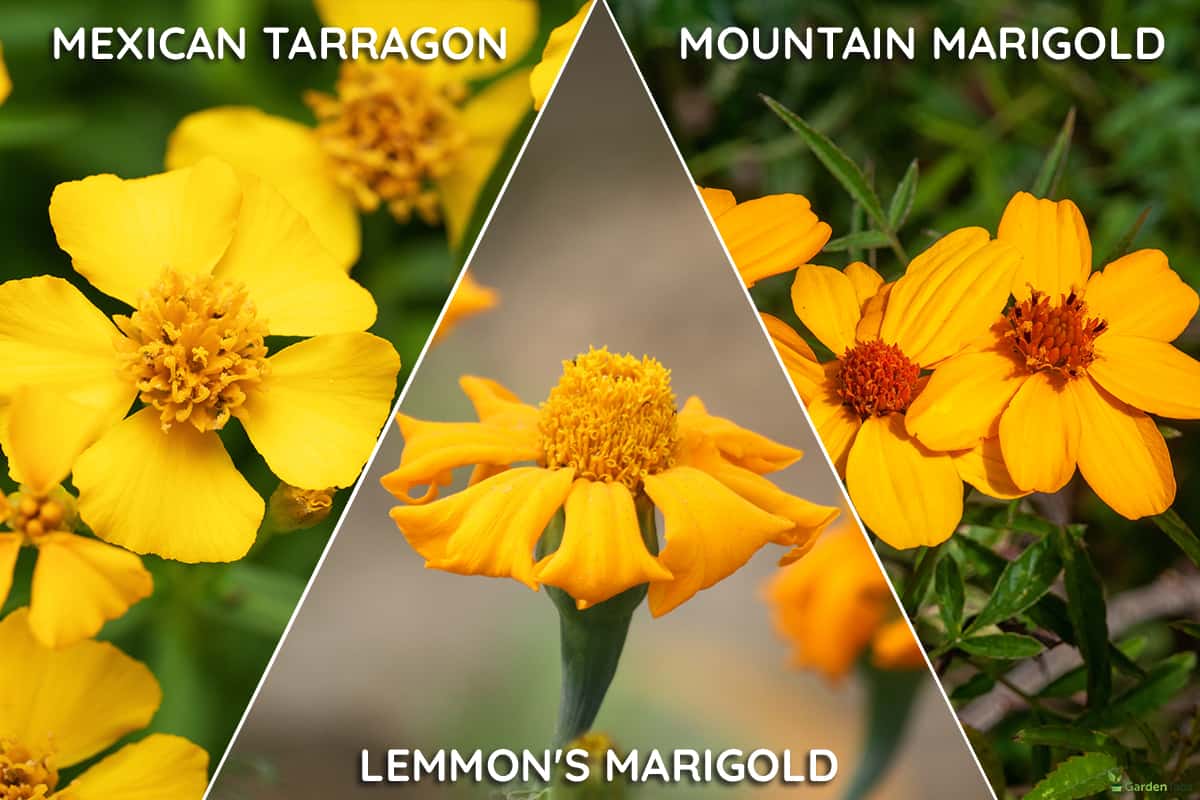 These are areas where winters are frigid and summers are hot. Therefore, most marigolds die off during the cold season and regrow during spring through fall.

Marigolds are easy to grow even on poor soil and drought. That's why it can grow anywhere between zones 2-11.

To know whether the marigold variety you will plant will thrive in your location, you can check the USDA Plant Hardiness Zone Map.

Do Marigolds Reseed Themselves? 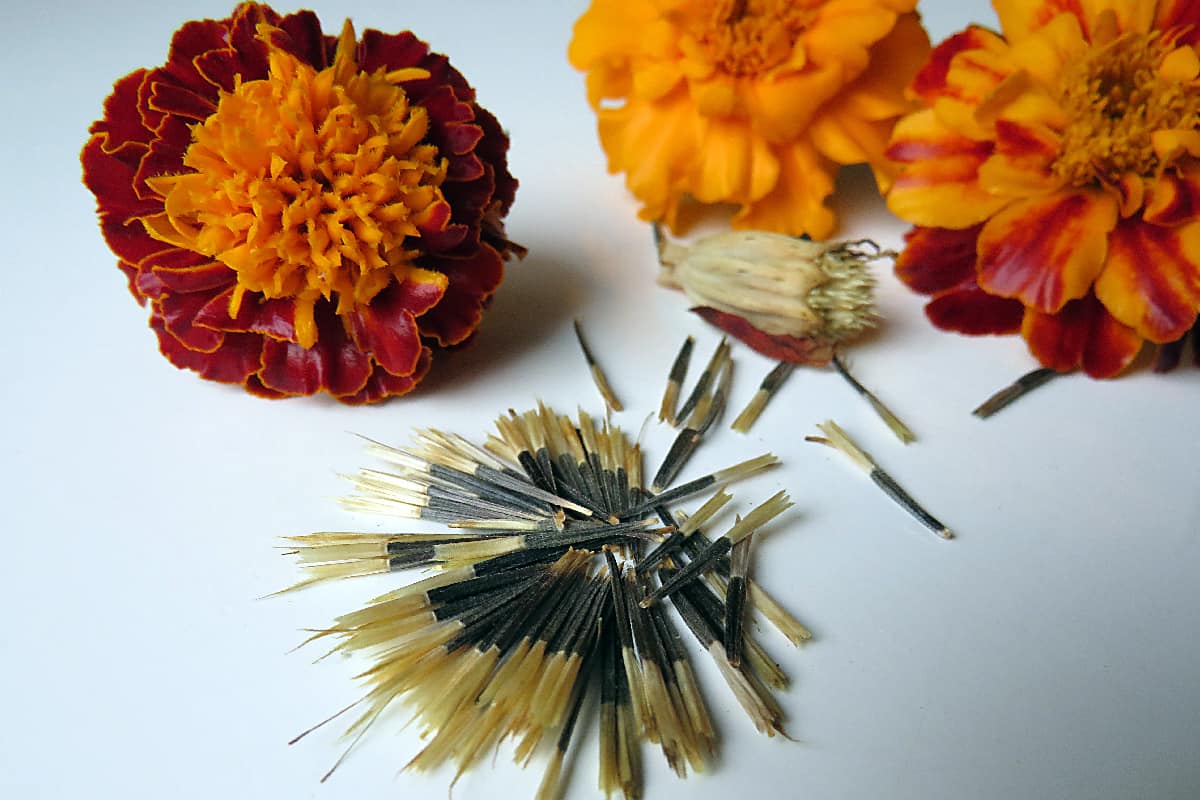 Wide varieties of Marigolds are self-seeding. Upon maturity, their flowers containing seeds will drop to the ground and spread throughout the flowerbed.

If you want to stop it from multiplying, deadheading is a popular technique gardeners use to encourage a second bloom, maintain the plant's appearance, and prevent further regrowing.

Most common varieties of marigolds are annuals, but because they reseed, others tend to mistake them as perennials as they keep regrowing every season.

Marigold seeds germinate quickly and are easy to sow. It's easy to save the seeds if you want to keep some for the next replanting. Take a mature bloom, shake out the seeds, and air dry.

No, they are not. French marigolds are annuals that produce many flowers during their blooming season. They are easy to grow in warm climates with lots of sunshine and well-draining soil.

French marigolds can be grown in both planters and outdoors. It requires very little maintenance except for light watering when the soil is dry or when the weather is warm.

They are half-hardy annuals which means they are sensitive to frost.

You can get thousands of French marigold seeds on Amazon. 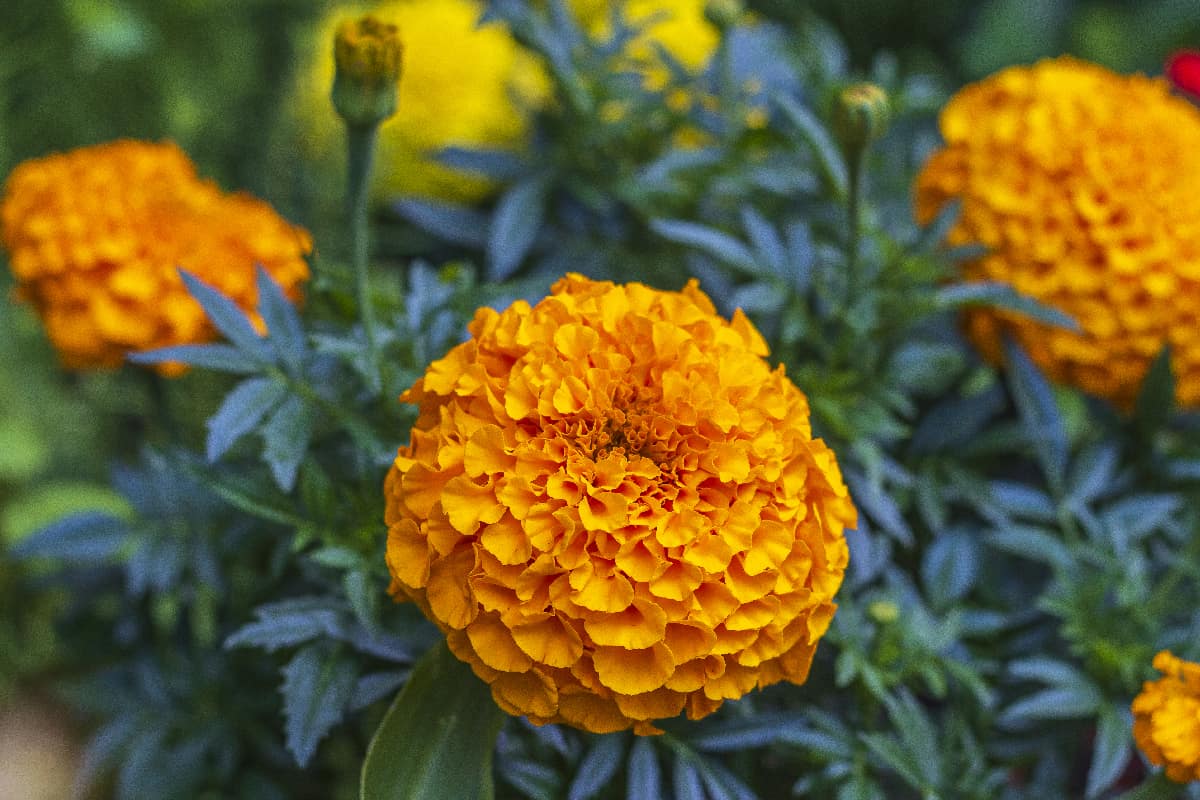 African marigolds (also called American or Aztec marigolds) are annual plants that bloom during summer because they are more tolerant of the heat.

They grow large flowers that range up to 5 inches in diameter. These are very easy to grow because they are not picky with the soil they grow in.

This variety can grow up to 48 inches in height. Its flowers can be bright yellow, orange, or gold, but they can also be dual-tone. They can be easily grown from seed or easily transplanted from seedlings.

Check out these African marigold mix seeds on Amazon. 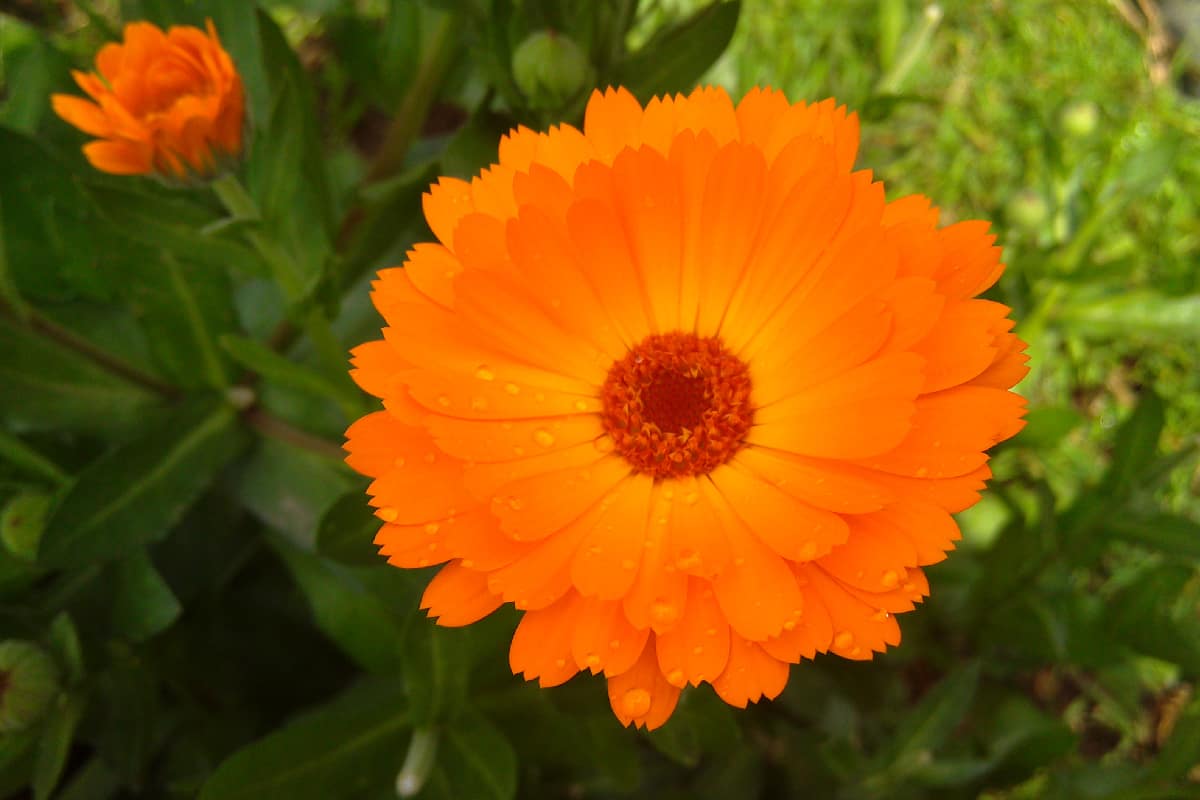 English marigolds are annuals, but just like most varieties, they are self-seeding and act like a perennial. This flower has many other names, including Pot, Poet's,  Scotch, and Common marigold.

This is a fast-growing variety and more tolerant of cooler weather than other varieties. It will reach full bloom in spring and give you weeks of bright flowers until the start of the first frost.

Unlike African and French blooms with ruffled and double flowers, the English marigold petals grow like sunflowers.

Check out these English Pot marigold seeds on Amazon.

Crackerjack marigolds are annual flowering plants. This variety produces a vibrant shade of yellow and gold flowers. They grow in full sunlight and are best companions of garden vegetable plants.

Their flowers can grow into giant overlapping petals, with the entire flower head growing up to 4-5 inches in diameter.

These giant, ball-shaped flowers are a favorite in many gardens, not just because of their beauty but also because they deter pests in the garden.

The dwarf variety of marigolds is the Dwarf French marigold (Tagetes patula), an annual plant. This variety typically grows up to 8 inches high, but some can grow it up to 12 inches.

It is initially grown from seeds in an indoor environment and transferred outdoors under warm conditions. They require little maintenance and can tolerate even extreme dry conditions.

Some dwarf types are genetically bred, such as the Happy marigold. It was bred to tolerate hot weather conditions and has bigger, more vibrant flowers.

Get your Dwarf French marigold seeds on Amazon.

The biggest marigold variety is the African marigold (Tagetes erecta), an annual plant. It grows up to 4 feet in height and grows large double flowers circling up to 5 inches in diameter.

You will usually see this variety grown around tomato gardens because it is an effective pest deterrent.

This plant is easy to grow from seed and usually germinates after only a week of planting. It can then be repotted or planted outdoors when the seedlings are about 3 inches in height.

This variety loves the sun and will bloom to its fullest beauty if it can soak up enough sun. However, it will also thrive under partial shade.

Orange marigolds are also from the African marigold species. Therefore, they are also annual plants. There are different orange marigolds; some are giants, while others are dwarfs.

Mexicans popularly use orange marigolds to honor their departed family members during the Day of the Dead. It's popular worldwide because the petals are also used for dyes.

This variety can be grown both outdoors and in containers. Deadheading is encouraged for continuous bloom.

Check out these African Orange marigold seeds on Amazon.

French dwarf marigolds are half-hardy annual plants, as mentioned above. You can identify a French marigold through its ruffled petals, available in various shades.

Because it's a dwarf variety, it's an excellent plant to be grown indoors as long as it gets adequate sunlight. This variety can have single or dual-colored petals in orange, yellow, and gold.

If you see marigolds planted around your neighborhood, these are most likely annual plants because perennials are harder to find.

Perennial marigolds like the Lemmon's and Mexicans can be found in warmer areas such as Arizona and Mexico, while the Mountain marigold can be seen mainly in North America.

Made it to the end? Check out these related garden articles below!

Should I Deadhead Marigolds [Which Marigolds Do Not Need Deadheading]?

10 Marigold Planter Ideas [With Pictures To Inspire You!]

Where Are Marigolds Native To? [Breakdown By State]